Dehumanization in All Quiet on the Western Front

In All Quiet on the Western Front by Enrique Maria Remarque, the reader follows Paul Baumer as he fights through World War I and discovers the trials of being a soldier. As they survive through the war with each other, Paul and the other soldiers began to understand certain realities of life. Going into the battlefield teenagers, the soldiers come out as old men, burdened with their experiences. The war, meant to glorify Germany and turn its men into heroes, deadens and dehumanizes Paul and the other soldiers until they can’t recognize themselves.

Don't use plagiarized sources. Get your custom essay on
“ Dehumanization in All Quiet on the Western Front ”
Get custom paper
NEW! smart matching with writer

As soldiers, Paul and his friends are treated with little care.

Their superiors act as if they are animals, replaceable and expendable because there are so many of them, and they hold so little power by themselves. Although only teenagers, these soldiers have had to grow up quickly in order to fight for their apparently insignificant lives. It is said that “[they] are the Iron Youth” (21). By describing the soldiers as “Iron,” Paul expresses how much the war has changed them.

Iron, which can be interpreted both literally and figuratively, is a strong metal that covers a lot of the Earth as well as residing in its core.

Therefore, with the soldiers described as “iron”, they are referred to as replaceable, expendable, and abundant in numbers. Also, “iron” can be used to describe someone who is determined, tough, and strong, showing how much these 19 year old soldiers have had to grow up in order to stay alive in the war.

They lost their childhood, aging into old men because of the devastation and experiences they’ve encountered. And slowly, as their childhood goes, their humanity and liveliness leaves as well.

The more the soldiers are treated like cattle, disposable and soulless, the faster they regress. Remarque often uses beast imagery to describe the soldiers at war, showing their relapse into animals while on the battlefield. We have become wild beasts. We do not fight, we defend ourselves against annihilation. It is not against men that we fling our bombs, what we do know of men in this moment in which death is hunting us down… we can destroy and kill, to save ourselves, to save ourselves and be revenged (73).

By using beast imagery, Remarque shows how the emotions of he soldiers are stripped away until they are only left with the instinct to do anything to stay alive. They fight not against other men, but other beasts as well, for deep down, all soldiers are the same, fighting for their comrades and for themselves instead of for their country. Just as men do beasts, Death “hunts” the soldiers on the battlefield, chasing after them as they become animals: replaceable, expendable, and superfluous. While the individual soldier is extraneous, many men make up the armies that fight wars.

Most often, Remarque describes how these many soldiers change mentally because of the war; by describing how these men physically come together to form a fighting company, Remarque shows just how much the war has changed them. Farther on, the mist ends. Here the heads become figures; coats, trousers, and boots appear out of mist as from a milky pool. They become a column…. individuals are no longer recognizable…. a column – not men at all (57). The “column” that Remarque uses to describe the soldiers shows how they are the support that holds the military up.

Without the columns of soldiers, the lieutenants, generals, and other leaders in the army would be insignificant because they would have no inferiors and not enough men to fight a war. The “individual” soldier is irrelevant, too. He has no power on his own, because men do not fight wars. Armies do. When one soldier falls, another takes his place without second thought, as if an automaton or a well-trained dog. They follow orders without questions, and eventually the soldier can no longer comprehend the man he used to be before the war, because they have lost all personality and individuality.

They have become blank, same, and dehumanized, more beastly with every day at the front. By the end of the war, the soldiers that returned to Germany are unrecognizable. They have fought like animals, run from Death, and seen so many horrors. While they went to war to be heroes, to fight for their country, the soldiers came back broken and empty, only shells of their former selves. They have regressed slowly, losing the will to live, and changing until they can’t recognize themselves.

Dehumanization in All Quiet on the Western Front. (2016, Sep 14). Retrieved from http://studymoose.com/dehumanization-in-all-quiet-on-the-western-front-essay 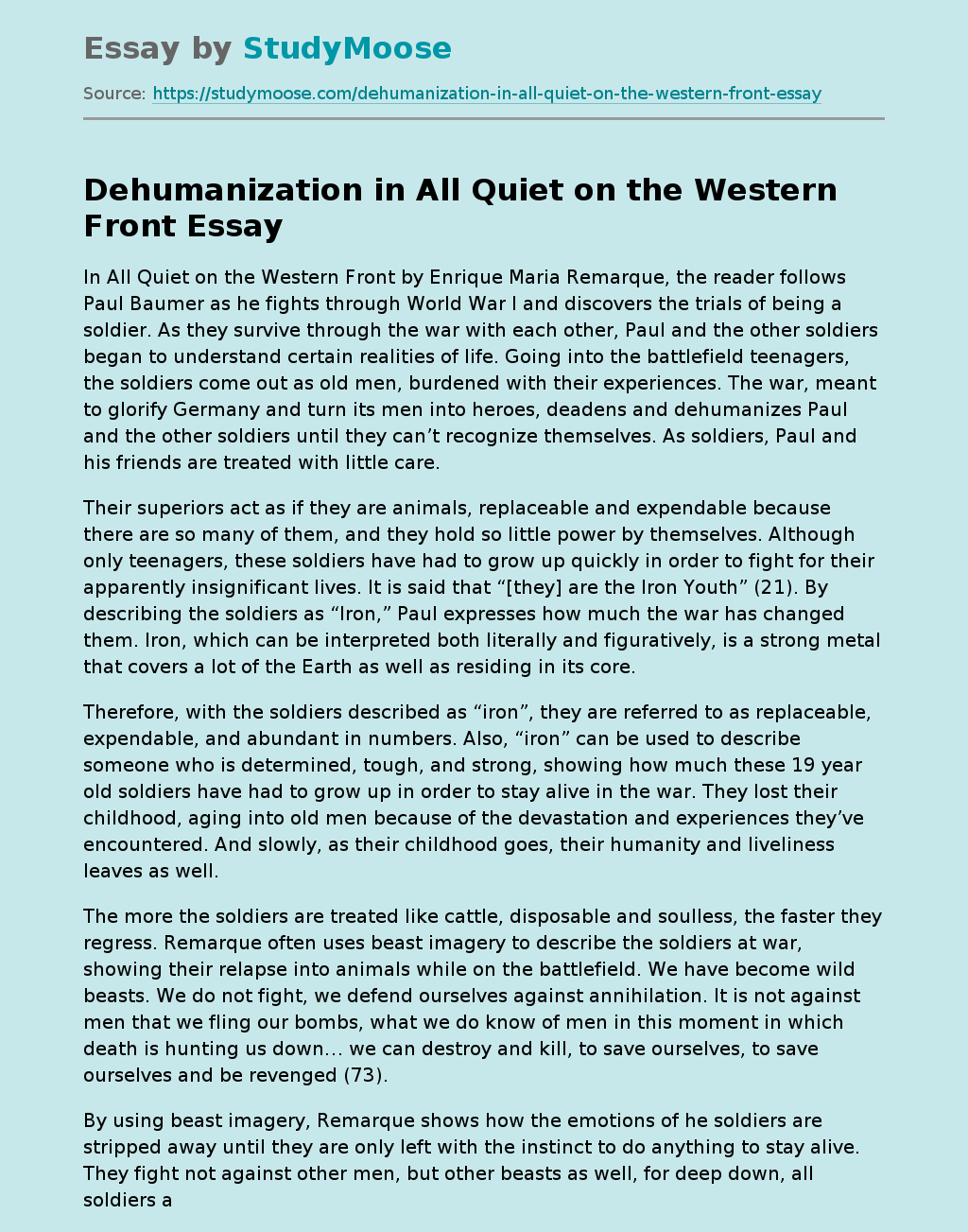