All Quiet on the Western Front: Corruption of Power theme

Power. The word itself instigates a conundrum of fear and attraction. The attraction for it, the attraction for more, and the attraction for seeking the absolute highest boundary of it. Those who thirst for it see visions of wealth, vast expansions territory, and above all, the ability to do whatever one wants whenever he wants. And those who thirst for it will seek it through whatever means necessary, whether it be a fistfight or a war. Necessity is the basic derivation for all hostility and aggression; therefore, power, and its corruption, is the source of all war.

Don't use plagiarized sources. Get your custom essay on
“ All Quiet on the Western Front: Corruption of Power theme ”
Get custom paper
NEW! smart matching with writer

Such corruption is exemplified in the World War I novel, All Quiet On the Western Front, by Erich Remarque, through the eyes of the platoon leader, of the military officials, and of the highest level of power in Germany at the time, the Kaiser.

The bottommost level of power represented in All Quiet On the Western Front is the platoon leader, who is given a pack of soldiers to bully around under his abusive authority.

The authority figure in the novel is Corporal Himmelstoss, who is to train the newly enlisted soldiers in the ways of war. He is described as a semblance of Louis Napoleon in the novel; “a small undersized fellow with a foxy, waxed moustache” (Remarque 23). Immediately the description of Himmelstoss triggers an image of a short, power-hungry figure, the figure that suffers from what many refer to as “small-man’s syndrome.” His image is further emphasized in the statement: “He had a special dislike of Kropp, Tjaden, Westhus, and me, because he sensed a quiet defiance” (Remarque 23).

Himmelstoss’s dislike for these soldiers is not directly related to the fact that he supposedly “sensed defiance”, but more so to his will to push the soldiers around.

He focuses his efforts on Tjaden, the “skinny locksmith…[who] is and always will be as thin as a rake” (Remarque 2-3). To make up for his lack of size and strength, Himmelstoss attacks the thinnest, soldier of the pack, who he assumes to be the weakest. However, when Himmelstoss loses his position of authority, he is not so brave. In the Front, during invasion, Paul Baümer finds Himmelstoss in the dug-out “pretending to be wounded. His face looks sullen. He is in a panic…He does not stir, his lips quiver, his moustache twitches” (Remarque 131). Himmelstoss is not a powerful man on his own, but under the spell of a powerful position, he is corrupted, and abuses it to disguise his own weaknesses, allowing him to gain some form of power.

The next level in the military edifice of power lies in the competitive military officials. With the increased level of power comes an increased level of corruption–and an increased level of consequence. Himmelstoss may have instigated hostility, even hatred, from his platoon, but the corruption of a higher military official may result in deaths. In a desperate effort to continue the attack on France, mass drafts occur, and the officials immediately send the untrained recruits to the front line. Paul Baümer states that the recruits “are helpless in this grim fighting area, they fall like flies. Modern trench-warfare demands knowledge and experience” (Remarque 129). The officials, in order to look good by fighting the war long and persistently, rush these recruits into battle, where they fall like flies. The officials carry out this inhumanity again and again, but it is not only for the sake of “looking good,” but for the desire of getting promoted, for the desire of gaining more power.

The head of power in Germany, and therefore the one able to command all those below, is the Kaiser, Wilhelm II. His position is so incredibly grand and authoritative, that he is seen almost as a form of deity. When Paul Baümer sees the Kaiser in person, he is “really rather disappointed; judging from his pictures I imagined him to be bigger and more powerfully built, and above all to have a thundering voice” (Remarque 202). This false impression of his emphasizes the disguise of power. Under his disguise, the Kaiser is viewed as giant, mighty warrior enthroned with gold and silver. In reality, he is a man unlike any other man in power, greedy and vicious. A man so powerful, Tjaden believes “he has everything he can want already” (Remarque 205). If he has everything he can want, why does he persist in the war? There is no limit to his demand for power, and so he pushes his officials further into battle, as they push their soldiers further into bloodshed.

The war Wilhelm II creates is not only devastating physically, but instigates what is known as the “lost generation.” Paul Baümer describes his experience, being “lost” because of the war. He “will never be able to be [indifferent and hopeless] again. [He] was a soldier, and now [he] is nothing but an agony for [himself]” (Remarque 185). His flourishing life was thrown away in the war and gave way to an indifferent automata, and after his leave, he is emotionally in between war and life, in “No Man’s Land.” An entire generation of soldiers, of human beings, of lives, is destroyed through emotion and severe disturbance. And for what? For Kaiser Wilhelm II to seek that highest boundary of power.

Power is a recurrent theme in All Quiet On the Western Front, in three different levels: the mindless soldier, the aspiring military official, and the boundless Kaiser. Each one desperately seeks power in an effort to make themselves appear stronger. The quest for this is usually a corrupted one, and corruption creates consequence. The more power one acquires, the more devastating the consequence. When, if at all, will the quest for power end? The corruption is inevitable.

All Quiet on the Western Front: Corruption of Power theme. (2016, Jun 30). Retrieved from https://studymoose.com/all-quiet-on-the-western-front-corruption-of-power-theme-essay 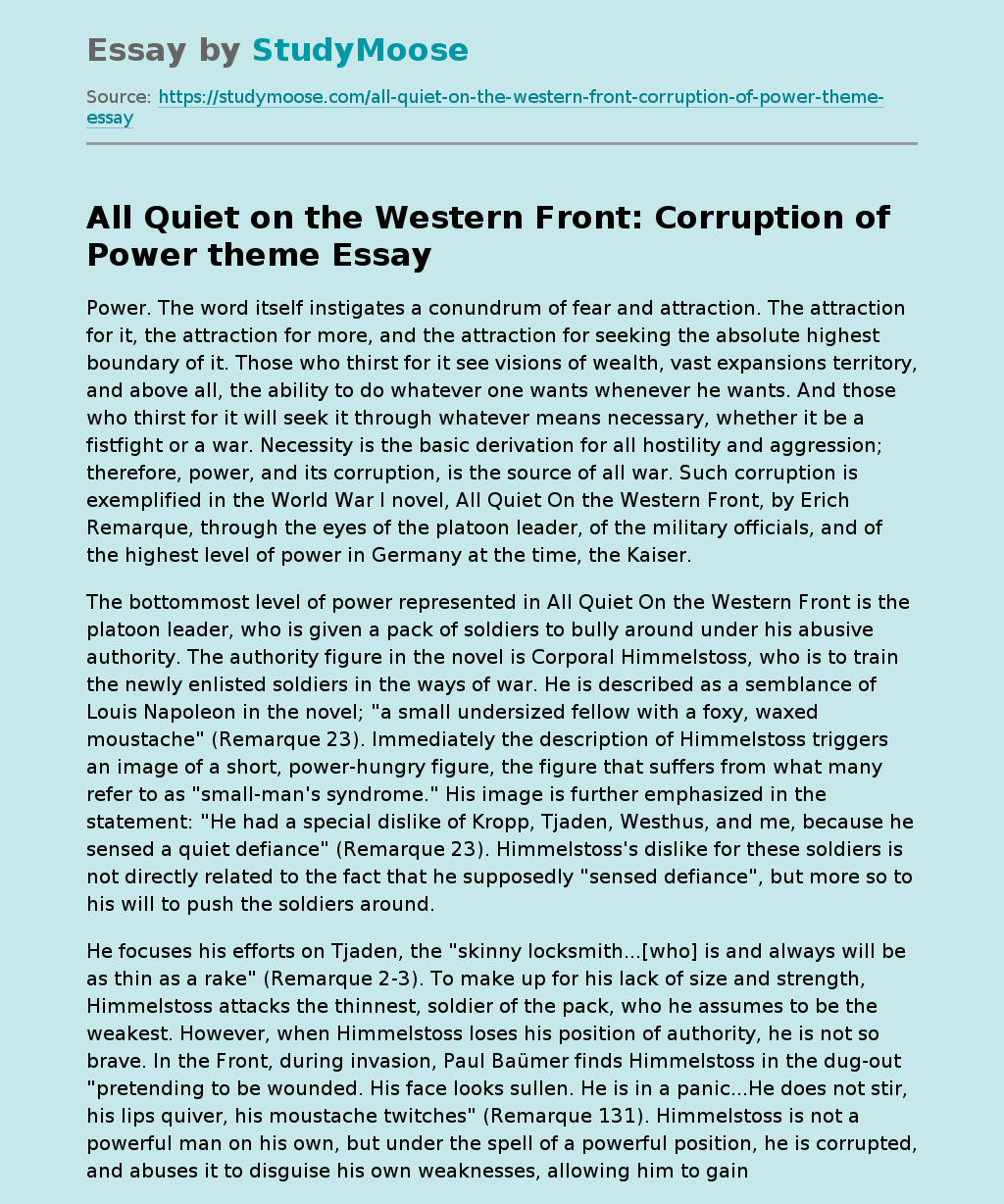