To what extent does this saying apply to George Orwell’s Animal Farm? The quote “power corrupts and absolute power corrupts absolutely” made by Lord Acton relates to the novel Animal Farm significantly. This quote expresses the fact that power can be abused and some infamous cases in history has shown that this can end in a tragedy. Power is a way through which authority and control is developed. It can be attained through the form of respect or in some infamous cases, fear.

Don't use plagiarized sources. Get your custom essay on
“ Animal Farm by George Orwell ”
Get custom paper
NEW! smart matching with writer

The idea that “absolute power corrupts absolutely” relates most directly to the pigs who possess the most power over the farm but neglect their duties to the farm and its habitants, leading to a dictatorship. One of the pigs who displays power over the animals was Old Major. Old Major was someone who “was so highly regarded on the farm that everyone was quite ready to lose an hour’s sleep in order to hear what he had to say” (page 1).

He used their respect for him to persuade them to strive for the creation of a better life. Old Major had power but wasn’t corrupted. His main goal was to create a utopian society in which equity is practised.

After the death of Old Major, the responsibility of leading the farm naturally fell on to the shoulders of Snowball and Napoleon. When commencing their leadership, Snowball and Napoleon were focused on helping to develop a better life for all the animals but as the novel progressed, Napoleon’s idea of leadership became corrupted.

In contrast to Old Major, Napoleon took actions which were for the sole benefit of the pigs. He abused his power and neglected his responsibilities as a leader. Napoleon first attained power through respect but later maintained it through fear a lot like the infamous Hitler. The animals weren’t permitted to oppose Napoleon as they feared him, “but suddenly the dogs sitting round Napoleon let out deep, menacing growls, and the pigs fell silent and sat down again” (page 40) . Hitler, like Napoleon, gained power over Germany but later used these powers to enforce his own beliefs onto the people. It was evident to the reader that Napoleon was corrupted from when “the animals(including Snowball) trooped down to the hayfield to begin the harvest, and when they came back in the evening it was noticed that the milk had disappeared” (page 18). Snowball was victim to the corrupted Napoleon. One sole reason as to why Snowball was evicted from the farm was due to Napoleon’s hunger for absolute power.

Although this is not clearly pointed out by Orwell, it is evident for the reader. Napoleon, before the eviction of Snowball, did have power and authority over the animal, but he did not have their undivided attention. “The animals formed themselves into two factions under the slogans, “Vote for Snowball and the three-day week’ and ‘Vole for Napoleon and the full manger’”(page 37). Napoleon craved for more power and as the quote states “absolute power corrupts absolutely”, he became absolutely corrupted after he gained absolute power through the eviction of Snowball. Napoleon became more and more like Jones and the humans he once despised. The most significant indication of the immense corruption in Animal Farm can be ascertained through the altering of the Seven Commandments. After the rebellion, the responsibility of following these commandments were given to every animal on the farm. These commandments were what distinguished the animals from humans. They helped the animals recognise the vices of human beings and assisted them in remembering these corruptions so they themselves, would never adopt them.

Throughout the book, these commandments were continuously altered to the pigs’ preferences, such as the situation in which Snowball’s followers were executed. As the pigs did not want the other animals to think that the Commandments had been violated, the sixth Commandment “No animal shall kill any other animal” was changed to “ No animal shall kill any other animal without cause”. “Somehow or other the last two words had slipped out of the animals’ memory. But they saw now that the Commandment had not been violated.” (Page 66). Additionally, the presence of a corrupted leader resulted in a corrupted government. The pigs placed themselves higher than other animals to whom the author often referred to as slaves. The pigs persuaded the animals through fear of Jones’ return, “it is for your sake that we drink that milk and eat those apples. Do you know what would happen if we pigs failed in our duty? Jones would come back!” (Page 25).

They lived in luxury while the other animals starved as “once again all rations were reduced except those of the pigs and the dogs“（page 81）. The Farm has not become the utopian society strived for due to the corrupted government. The pigs regarded themselves to be on a higher tier than the other animals, completely violating the last and most important Commandment “All animals are equal”. This corruption led to the failure of the rebellion. “Power corrupts and absolute power corrupts absolutely” is one quote which summarises the events occurring in the novel “Animal Farm”. It expresses the negligence and abuse of power such as that of the pigs. The corruption of the pigs, particularly their leader, Napoleon, expressed the truth behind this quote. The presence of corruption eventually led to the failure of the rebellion. 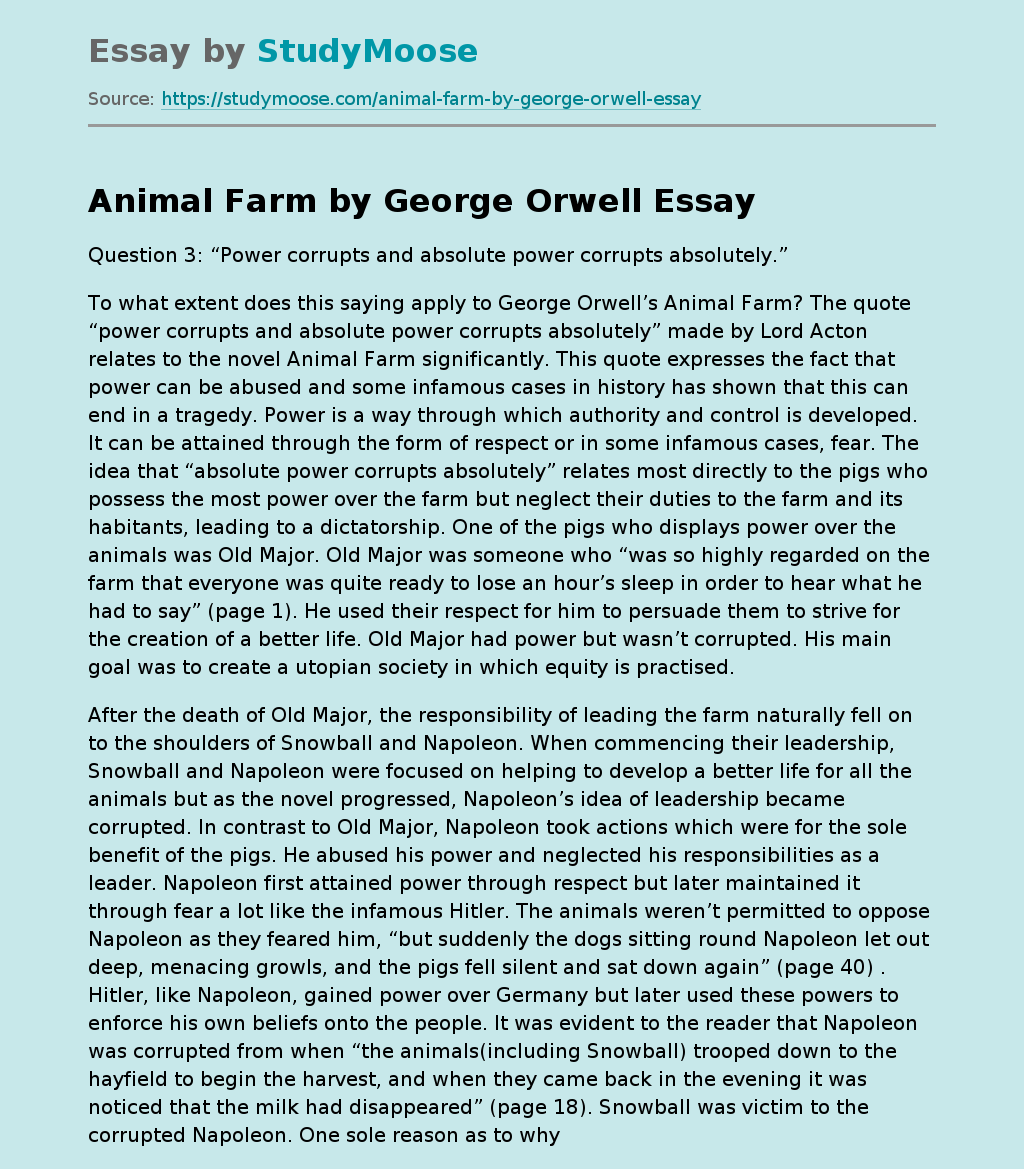