Old Major was a high-quality boar who a couple days before he died held a meeting, where he told everyone about his vision of a farm where animals could be free with no humans to torment them.

Don't use plagiarized sources. Get your custom essay on
“ All Animals Are Equal, but Some Animals Are More Equal Than Others ”
Get custom paper
NEW! smart matching with writer

From this meeting came the seven commandments of animalism by which all animals should live with the most important one being ‘All animals are equal’. It soon came to be, due to passing of power into the wrong hands, that the command had been changed into ‘All animals are equal, but some are more equal than others.

This commandment has been true from the beginning when Napoleon drank the milk, when the pigs had already taught themselves to read and write, and when the pigs supervised while the other animals worked. Now the pigs have declared what has always been true. Napoleon was a “large, rather fierce-looking Berkshire boar” and was the only Berkshire boar on the farm. He lacked communication skills but was always intent on getting his own way. After the rebellion had taken place and drove Farmer Jones away, he, along with the other pigs, took charge of the farm.

He also sent Snowball, who was his rival because of his great rhetorical abilities and creativity, into exile. Napoleon, however, was very corrupt in the way he controlled the farm. An example of how he endorsed the new command ,‘All animals are equal, but some are more equal than others’, through his leadership was when he changed the commandments to suit both he and the pigs’ lifestyle because they knew they were breaking the original commands. They used Squealer to persuade the other animals into believing it was in their best interest.

An example of a change in a command is ‘Thou shall not kill any other animal, without cause’ and it was changed because his dogs had killed some animals that he had deemed as ‘traitors’ because they had ‘partnered’ with Snowball. Another example of how Napoleon was endorsed the new commandment is when he and the other pigs began to live in the farmhouse. They slept there at nights and made it their personal space. They also wore the farmer’s clothes and used the silverware while the other animals didn’t.

Napoleon again, used Squealer to persuade them into thinking that the pigs needed a more comfortable space because they are the brains behind everything. By doing this they disobeyed the commandments which stated that no animal should sleep in a bed or wear clothes. Lastly, another way in which he showed his approval of this commandment was the way in which he gave rations of food. Napoleon, the dogs and the pigs did not help in any of the manual labour done on the farm to produce food yet still there rations were larger than the other animals.

The animals were overworked, underfed and tired. It seemed as if they gave and gave and received little in return. Whenever rations were reduced due to food shortages, the pigs’ and the dogs’ rations were not. The pigs not only received larger portions but certain foods were reserved specially for them. An example of which was barley from which they made beer and ordered that each pig would receive a pint of beer with Napoleon receiving a half a gallon!

Squealer persuaded the other animals into thinking that the pigs needed it because the y were the brainwork of the farm and he also threatened that if the pigs did not get it they would not be able to properly function and Jones would return. He also convinced them that their rations were “readjusted” and not reduced and that it was still better than that of Jones’ day. Snowball was very enthusiastic about the principles of animalism and had new ideas of how he could improve the farm and life for these animals.

One example of his strong belief in animalism was when they had expelled Jones and his men from the farm and began to burn and dispose of all the weapons and tools of torture, he made sure to burn the ribbons that were used to decorate horses on market day. He said it was a form of clothing and “All animals should go naked” so therefore showing that if he was leader, he would want all animals to be the same and no animal would be distinguished from one by wearing clothes which was what Napoleon did by allowing the pigs to wear human clothes.

Another example is that Snowball was constantly reading and trying to figure out ways to improve things for all the animals and not only himself. This shows that he is more interested in helping the animals more than he is interested in getting power. Snowball believed in democracy and this is shown when he made sure to tell the other animals about any plans and to hear their opinions at their meetings. This so he would not make their choices for them as if he was a dictator or better and smarter than them. Snowball therefore believed that all animal should be equal. 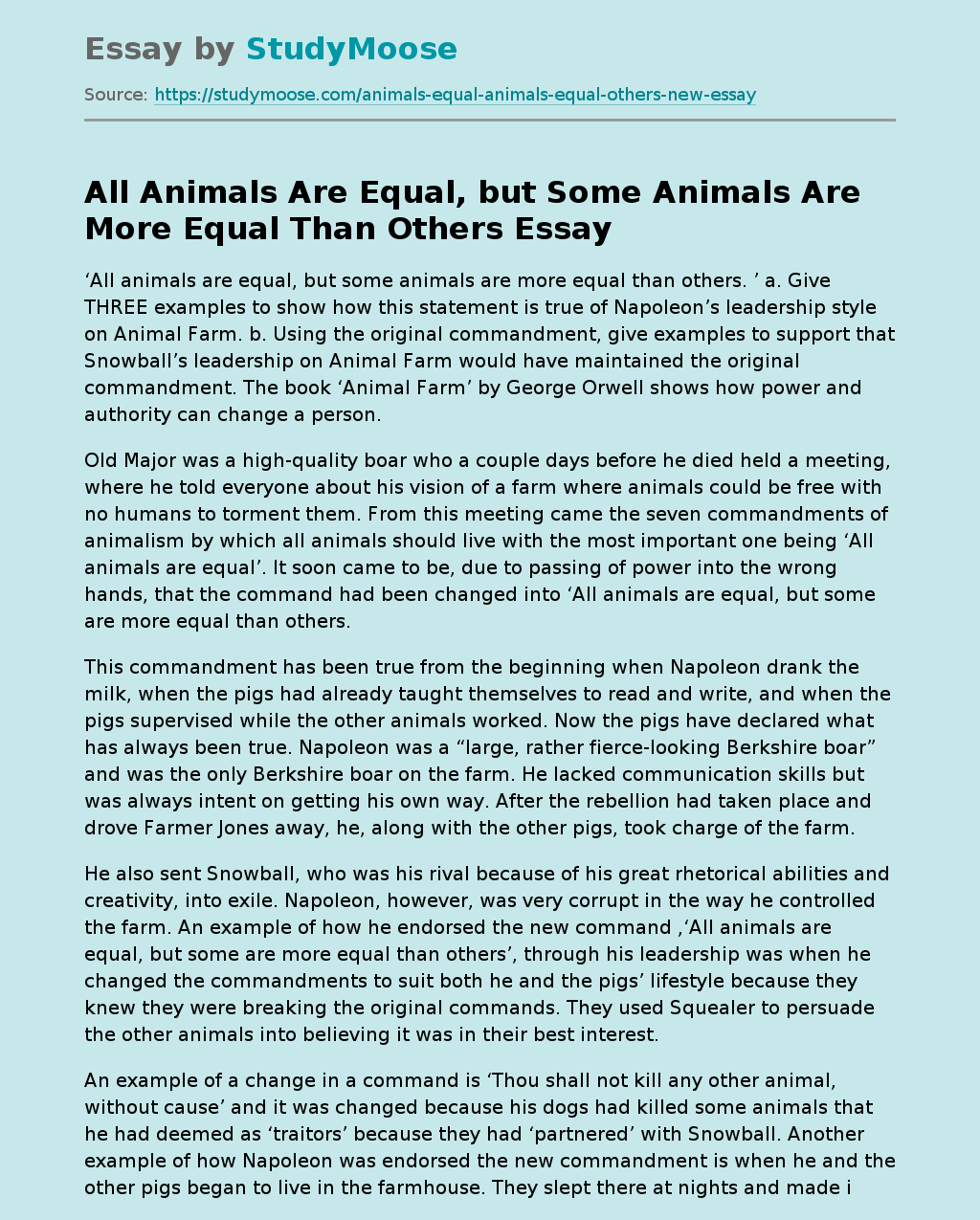