Both Shakespeare and Orwell present rivals as threats to their leaders’ power. Shakespeare introduces this threat through the Witches in Act 1, scene 3 when the third witch announces that Banquo ‘shall get kings’. In Macbeth’s soliloquy in Act 3, scene 2, the audience is reminded that he is predisposed with maintaining his power, now that he has become king, and illustrates that Banquo was announced as a ‘father to a line of kings’. The audience assumes that Macbeth is infertile as he feels he is unable to produce an heir as he expresses his ‘fruitless crown’ and his ‘barren sceptre’ and seems quite indignant that Banquo’s will profit from ‘the gracious Duncan’ that he has murdered.

Don't use plagiarized sources. Get your custom essay on
“ Macbeth and Animal Farm ”
Get custom paper
NEW! smart matching with writer

It appears that Shakespeare is justifying Macbeth’s ruthless ambition and want to maintain power, which puts Macbeth into darker depths by having Banquo and Fleance murdered, by his lack of an heir.

Similarly, the audience is provided by Snowball as the rival to Napoleon’s absolute power in his introduction to the character in Chapter 2.

Orwell tells the reader he ‘was a more vivacious pig than Napoleon’, setting him up immediately in competition His description goes on to describe him as ‘quicker in speech and more inventive ‘. This is proven when he emerges later in Chapter 4 as the brave hero of the Battle of the Cowshed after which we see him awarded with the military decoration of ‘Animal Hero First Class’ while the reader realizes Napoleon seems to be conspicuous in his absence. Moreover, Snowball invents plans for the windmill and Orwell outlines all his creative ideas in his committees and therefore Napoleon clearly makes plans to expel him from the farm.

The key difference between Shakespeare and Orwell’s presentations is that we witness Macbeth’s thought processes and plans while Orwell keeps the reader in the dark yet offers them clues that Napoleon is not to be trusted. It comes as no surprise to the reader in Chapter 5 when Napoleon unleashes his personally educated dogs, who represent Stalin’s secret police, on Snowball. Both leaders maintain power by eradicating any competition.

Comparisons between characters:
Lady Macbeth, Macbeth and Napoleon all use others to further themselves. Lady Macbeth takes advantage over Macbeth by persuading him to kill Duncan so she can have more power. Napoleon uses Squealer to take advantage of the other animals by making them their slaves and being made to believe all Napoleon’s decisions are best for the farm. Both Napoleon and Macbeth become power hungry which turns into a negative effect, both use violence to gain power by installing fear into people Macbeth’s hunger for power causes him to murder many innocent people and eventually leads to him downfall. Napoleon’s hunger for power causes him to use excessive force and make the animals do slave labor. -both Napoleon and Macbeth represent Stalin

Differences:
One is a play, one is a novel
M written in 1606 when James 1 was in power in England (birth of the Stuart regime) AF was published in August 1945 after the Russian Revolution of 1917 + predicted the Cold War.

Throughout both ‘Macbeth’ and ‘Animal Farm’ the audience can see a large amount of deceit, treachery and a lack of trust between the leaders’ and their followers. Shakespeare shows this deceit in Macbeth’s relationship with other characters where he hides his true feelings and ‘is here in double trust’. However, the audience is privy to the true thoughts of Macbeth and his wife due to their plotting in Act 1, scene 5 where Lady Macbeth tells Macbeth to ‘look like th’innocent flower/ But be the serpent under’t’ and which creates dramatic irony during the play. Similarly, Orwell’s novella ‘Animal Farm’ uses dramatic irony as the audience can see that the pigs are manipulating the animals into slave labor and although the audience is not made privy to Napoleon’s innermost thoughts, we can still see past the animals’ lack of intelligence to see the pigs are re-writing the 7 Commandments. 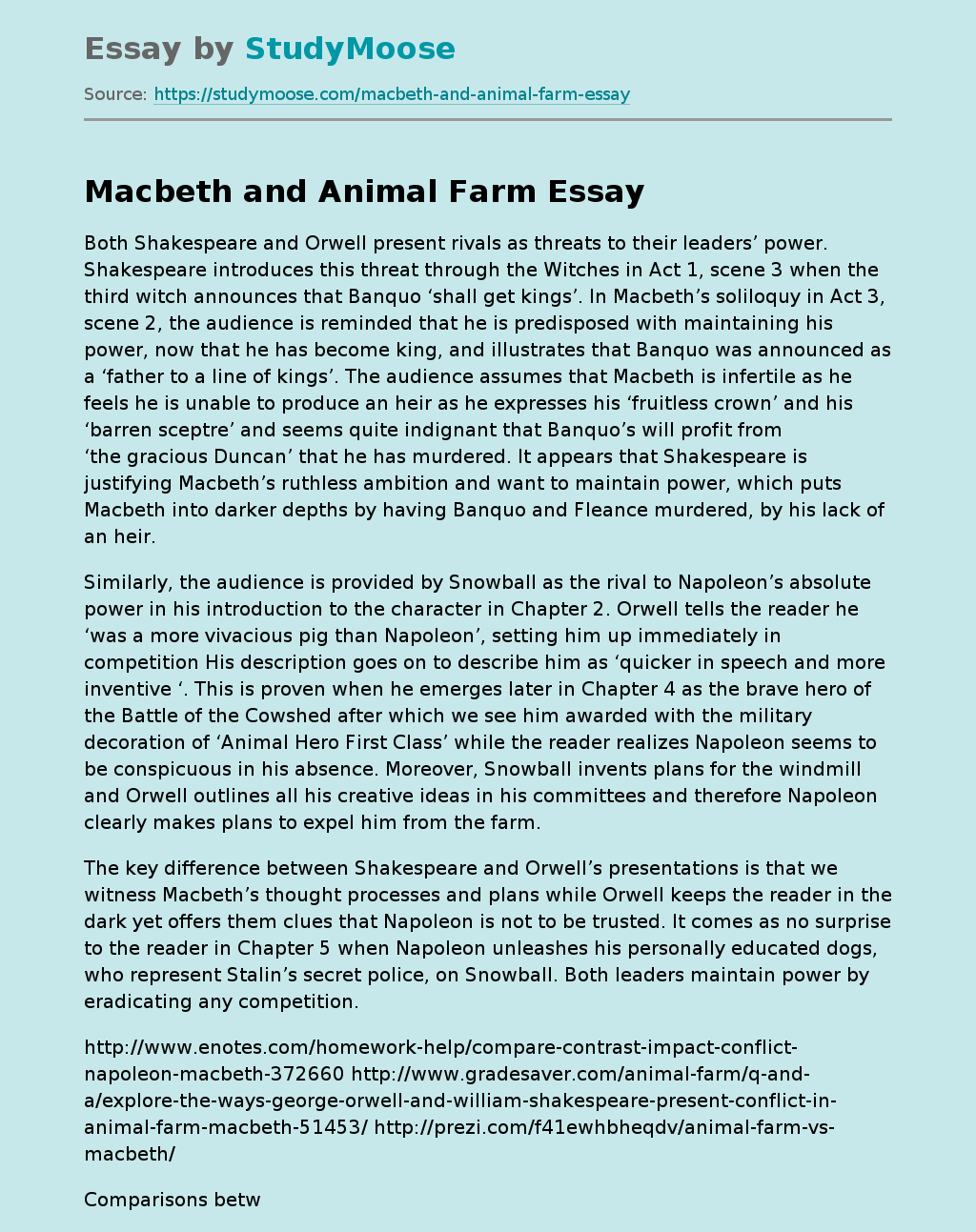