In the novel ‘Animal Farm’, power is what destroys the farm in the end. Although power can be used for good, it can also be used for evil when too much is given. The quote “Power tends to corrupt, and absolute power corrupts absolutely” (Lord Acton) is portrayed in this book.

In the beginning of the novel, Old Major uses his power over the animals to carry through his plan of the Rebellion. It could be argued that the way he was using his power was for the good of the farm, but he took advantage of his status at the farm and used it to persuade them into doing what he wanted.

Don't use plagiarized sources. Get your custom essay on
“ Animal Farm ”
Get custom paper
NEW! smart matching with writer

“Old Major (so he was always called, though the name under which he had been exhibited was Willingdon Beauty) was so highly regarded on the farm that everyone was quite ready to lose an hour’s sleep in order to hear what he had to say” (Orwell 25). This was the beginning of the use of power.

After Old Major had died, the power had been passed along to the other pigs Napoleon, Snowball and Squealer. This is when we start to see the power turning into evil. In the beginning they wanted to make it a truly equal society and they did this by making the Seven Commandments; one including “All animals are equal”. But throughout the book, we see that the pigs become the ‘leaders’, which therefore means that everyone is not equal. The pigs naturally have the power because of their intellect.

“The pigs did not actually work, but directed and supervised others. With their superior knowledge it was natural that they should assume the leadership” (Orwell 45). The pigs use their superior knowledge and their power to brainwash and convince the other animals of whatever they wanted them to think or do. They would change the commandments to whatever suited them, and the other animals would just follow along because “Napoleon is always right”. The pigs would twist their own words, like voluntary, to make them think they had freedom. “This work was strictly voluntary, but any animal who absented himself from it would have his rations reduced by half” (Orwell 73).

Wherever there is power, there is always conflict. Napoleon and Snowball were both in power, but Napoleon wanted it all for himself so he got rid of Snowball with his dogs. After this everything got worse. Napoleon had all the power to himself, which made him greedy and evil. There was food shortages and hard labour for everyone but the pigs. The pigs had special treatment like living in the farmhouse and sleeping in beds. “It was absolutely necessary, he said, that the pigs, who were the brains of the farm, should have a quiet place to work in” (Orwell 79). The pigs used their power for these benefits. Eventually Napoleon was ‘elected’ president. He used his power to make the animals think they were voting, but really there was only one candidate.

At the end of the book we find out that all of the hard work put into the Rebellion and into getting rid of the humans to make the animals lives better, was all a waste of time. The power got to the pigs heads and made them turn the farm into something even worse than it was before. The pigs had turned into exactly what they were fighting to get rid of. The abuse of power is what made the pigs become like humans. “Twelve voices were shouting in anger, and they were all alike. No question, now, what had happened to the faces of the pigs. The creatures outside looked from pig to man, and from man to pig, and from pig to man again; but already it was impossible to say which was which” (Orwell 139).

Power can mean many different things. In ‘Animal Farm’, power was abused and was used for evil. It was used to take control over others, and to take away their freedom. This novel proves that equality in a society is impossible to achieve. The need to have and to gain power will always get in the way of being a truly equal society. 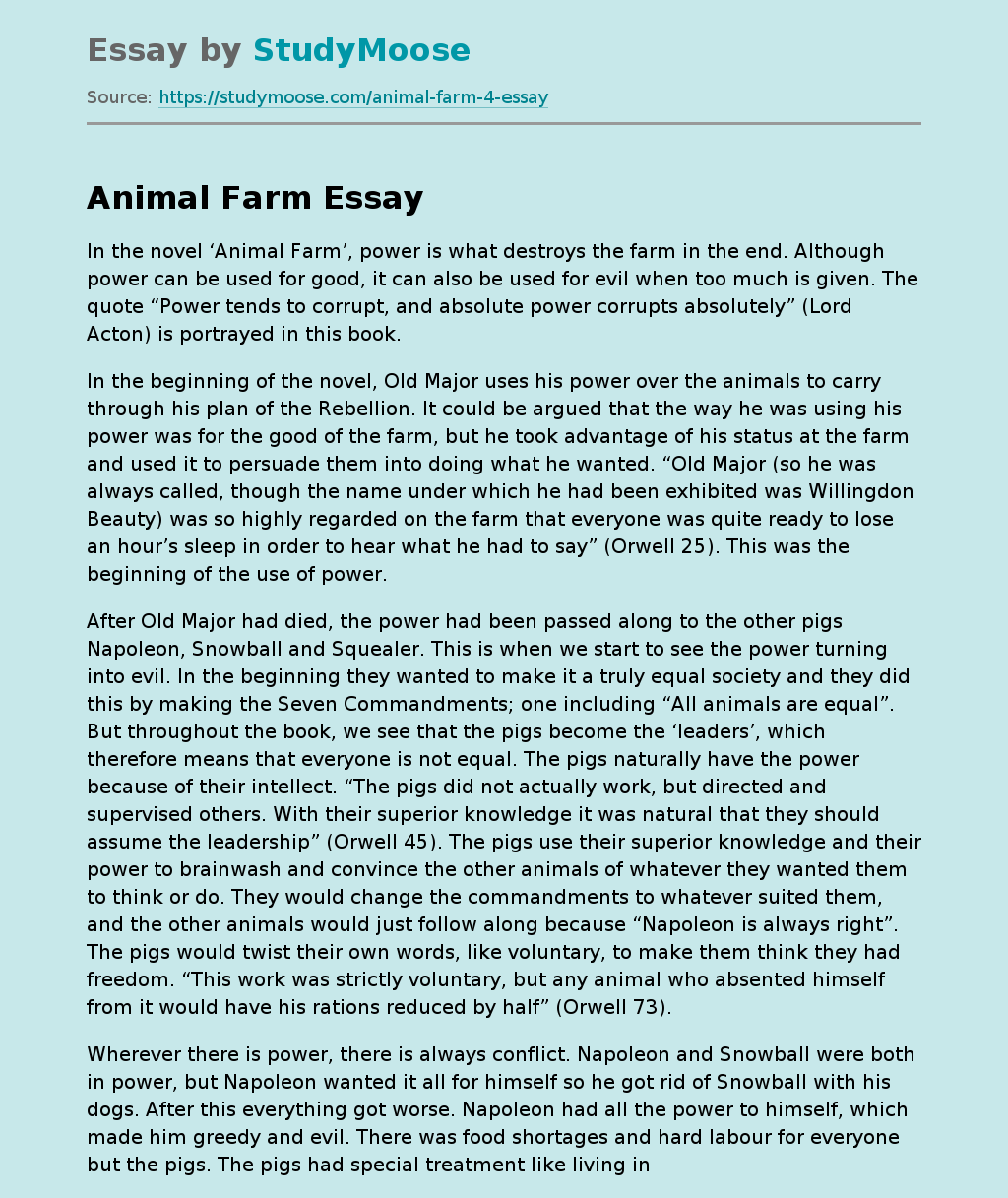