The Abuse of Language in Animal Farm

Animal Farmis a great work by Orwell that includes many things that are real in life. In his book, Bloom says that, “sixty years have passed debating over the ultimate political meaning of Animal Farm, but it owes partly to its use of propaganda” (Bloom, 2007:53). The corruptions and distortions of language which helped Napoleon to have a dictatorial government in Animal Farm became a particular concern of Orwell’s last years. In his essay, Politics and English Language (1946), he recognized that “if thought corrupts language, language can corrupt thought” (Sanders, 1999:571).

Propaganda is one of the ways to abuse language and it is powerful enough to change the most visible truths. It can reshape the truth too. This distortion of language is done very easily in the novel by pigs like Squealer. Pigs are the only literate animals on the farm. Their cleverness helps them to deceive other animals that are not literate very easily. Pigs reject to educate other animals and they let them stay illiterate, so there is nothing to prevent pigs from abusing language.

The Abuse of Language and Squealer

Usually all of the tyrants in the world have their sycophants, and Squealer is Napoleon’s. Squealer is a clever and intelligent pig who is described in the novel as a pig who “could turn the black into the white” (Orwell. 2009: 9) and also who “had a way of skipping from side to side and whisking his tail which was somehow very persuasive (Ibid, 9) while explaining his rhetorical answers to the questions that other animals ask when they suspect something or see something unusual in the farm.

In the novel, he serves as Napoleon’s mouthpiece and the Minister of Propaganda. Whenever animals question one of Napoleon’s actions, regardless to how selfish and severe it may seem, Squealer succeeds in convincing the animals that Napoleon is only acting in their best interests and that their leader, Napoleon, himself made great sacrifices for Animal Farm. (Moran, 2000:46) When the pigs decide that the milk and the wind-fallen apples should be for them and that they needed to take them, other animals don’t agree. Squealer goes to them and addresses them: “Comrades!” he cried.

“You do not imagine, I hope, that we pigs are doing this in a spirit of selfishness and privilege? Many of us actually dislike milk and apples. I dislike them myself. Our sole object in taking these things is to preserve our health. Milk and apple (this has been proved by Science, comrades) contains substances absolutely necessary to the well-being of a pig. We pigs are brain-workers. The whole management and organization of this farm depend on us. Day and night we are watching over your welfare. It is for your sake that we drink that milk and eat those apples. Do you know what would happen if we pigs failed in our duty? Jones would come back! Yes, Jones would come back! Surely, comrades,” cried Squealer almost pleadingly skipping from side to side and whisking his tail, “surely there is no one among you who wants to see Jones back?”(Orwell, 2009: 21) Here, Squealer reveals his rhetorical skill and capability to “skip from side to side” to persuade animals that what pigs are doing is nothing but a sacrifice. Referring to science and lying that pigs dislike the apples and the milk, Squealer manages a great public-relations stunt by picturing pigs as near-martyrs who never think of themselves but other animals.

His speech makes the animals thinks that pigs are really selfless, not selfish. Squealer’s rhetorical question, “Surely there is no one among you who wants to see Jones back?” is used here for the first time but he will use it many times to make the animals believe that their situation now is better than the time when Jones was their master, despite all the discontentment they may feel. (Moran, 2000: 23-24) Napoleon opposes the idea of building a windmill at first but now he declares that after all it must be rebuilt and this surprises the animals but as usual Squealer makes his way into them and tells them that Napoleon never opposed it: That evening Squealer explained privately to other animals that Napoleon had never in reality been opposed to the windmill. On the contrary, it was he who had advocated it in the beginning, and the plan which Snowball had drawn on the floor of the incubator shed had actually been stolen from among Napoleon’s papers. The windmill was, in fact, Napoleon’s own creation. Why, then, asked somebody, had he spoken strongly against it? Here Squealer looked very sly.

That, he said, was Comrade Napoleon’s cunning. He has seemed to oppose the windmill, simply as a manoeuvre to get rid of Snowball, who was dangerous character and a bad influence. Now that Snowball was out of the way, the plan could go forward without his interference.(Orwell, 2009: 35) If animals knew how to read and write, things may have been totally different. Squealer uses sophistry (the art of using false arguments to deceive) to conceive the animals that there has never been a rule against beds. Other animals were illiterate and even the literate ones didn’t have the ability to remember whether the commandment has been altered or not. But, surely, if they were all literate, it may have improved their memory too. By changing the commandments, Squealer also re-writes the history to suit Napoleon’s ambitions. (Morgan, 2011: 33) Squealer, this time, turns to the usage of some words that he is sure other animals are not able to understand.

When he explains to the animals why Napoleon didn’t mention before that the windmill was his idea and now he mentions it, he tries to use a word that can silence animals, so he says to them: “This, said Squealer, was something called tactics…The animals were not sure what the word meant.” (Orwell, 2009: 35)The usage of difficult words and words distract animals is to make the content of the speech as ambiguous as possible. Animals were semantically unable to decipher the complexity of words. (Bloom. 2009: 38-39) When the animals’ ration reduces, Squealer tries to find a word that has a good connotation to replace the word (reduction) and finally finds the word (readjustment).

This may make the animals feel that their condition now is better that the time when Jones was their master he says: “…it had been found necessary to make a readjustment of rations (Squealer always spoke of it as a “readjustment”, never as a “reduction”)” (Orwell, 2009: 67)According to Longman dictionary of Contemporary English (2011), the word (reduction) has a bad connotation which means “a decrease in the amount of something”, but the word (readjustment) doesn’t have a bad connotation which as a verb means “to make a small change to something” (Longman dictionary of Contemporary English)

The Abuse of Language and Napoleon

Napoleon is described in the novel as a “large, rather fierce-looking boar, the only Berkshire on the farm, not much of a talker, but with a reputation for getting his own way.” (Orwell, 2009: 9)He was a dictatorial pig and principal figure of the farm. An example about the truth that he has a reputation to get his own way is when the cows are milked, all animals seek the taste of the milk but Napoleon is shrewd enough to divert their attention from the milk to the work that they must do in the Farm. When animals come back from the work, the milk is gone. (Quinn, 2009: 63) Moran says that, “While Jones’ tyranny can be somewhat excused because of the fact that he is a dull-witted drunkard, Napoleon’s tyranny can only be ascribed to his blatant lust for power.” (Moran. 2009, 45)

He drives his opponent, Snowball, out of the farm and uses a rhetorical language to reach to power. He mostly uses his mouthpiece, Squealer, to convince the animals that he is always right and Squealer “turns black into white” (Orwell. 2009, 9) When the windmill gets destroyed, Napoleon tells the animals that they will rebuild it and he puts the blame on Snowball. His language is so moving that the animals forget their sorrows and push forward to work with more fervor than ever. He tells them: “This very morning we will rebuild the windmill, and we will build all through the winter, rain and shine. We will teach that miserable traitor (Snowball) that he cannot undo our work so easily.”(Orwell. 2009, 43)

The Abuse of Language in Animal Farm. (2016, Aug 19). Retrieved from http://studymoose.com/the-abuse-of-language-in-animal-farm-essay 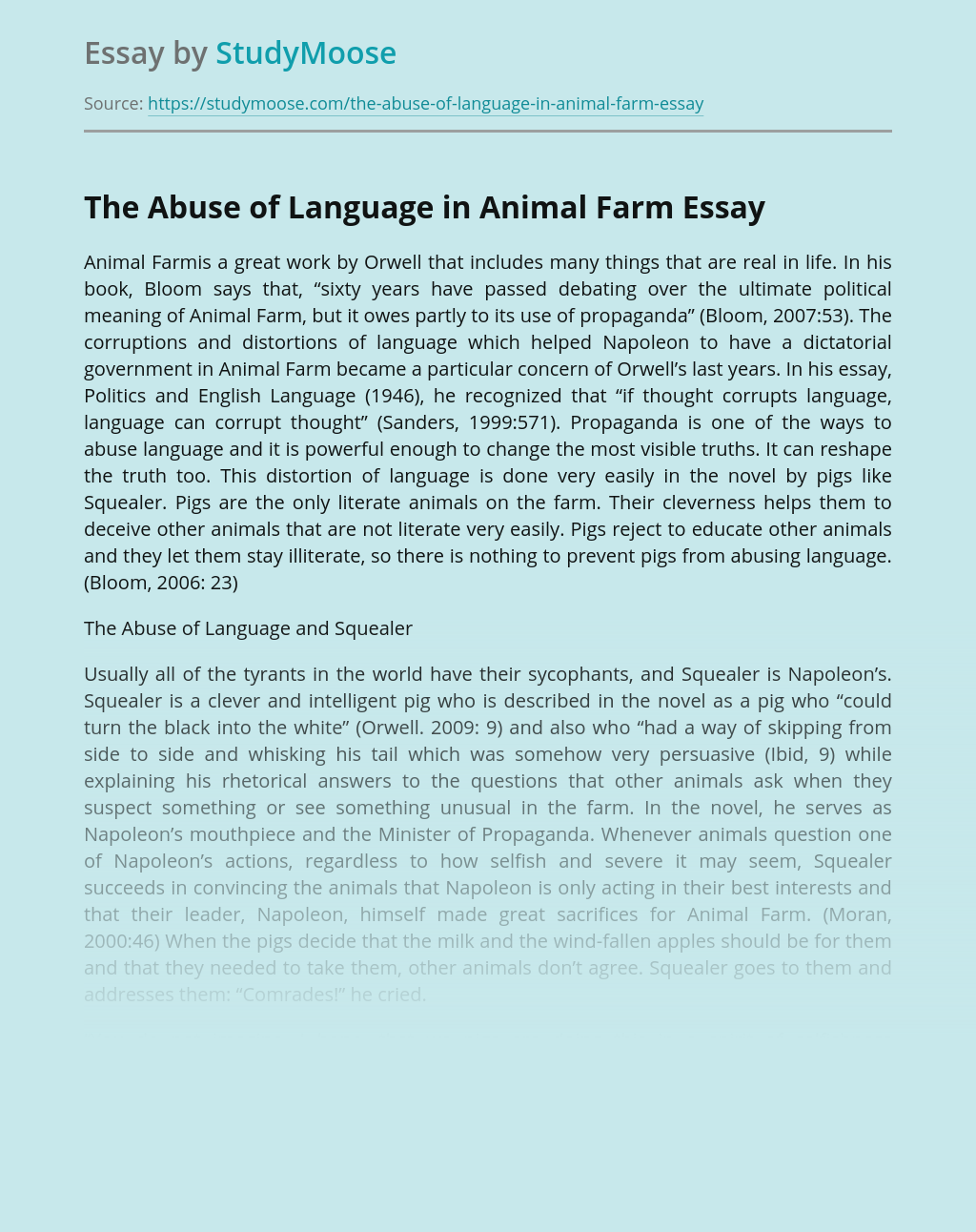 Don’t waste time
Get a verified writer to help you with The Abuse of Language in Animal Farm
Hire verified writer
$35.80 for a 2-page paper
Stay Safe, Stay Original