Why did the Communists gain control of China in 1949?

In 1949, the Nationalist party of China, the Kuomintang (KMT), fled from mainland China after a civil war with the Chinese Communist Party. The KMT’s failure was due to poor management and widespread corruption within the party.

In 1912, the last Chinese Emperor abdicated, with many parts of China resisting Imperial rule. With this abdication, China disintegrated into various smaller provinces, each one rules by a different warlord. Around this time, two political parties formed. One was a Nationalist Party, the KMT, founded by Sun Yat-sen.

Don't use plagiarized sources. Get your custom essay on
“ Why did the Communists gain control of China in 1949? ”
Get custom paper
NEW! smart matching with writer

The other was a Communist party, the CCP. From 1925, to 1927, the CCP and the KMT were united in efforts to unify China, and defeat the warlords. However in 1927 Chiang Kai-shek, the KMT leader, decided that the Communists were a threat to National unity. He ordered members of the Kuomintang to turn their guns on the Communists. 5 600 Communists were killed in the massacre, though many fled into neighboring mountains.

The CCP was constantly besieged by Nationalist forces. In 1934, the CCP’s army fled from its Southern stronghold to its Northern province. They were relentlessly harried by KMT forces, and it took a year to march the long distance. The Long March gave the CCP the opportunity to spread the ideals of Communism to ordinary Chinese people. This made the people believe that Communism would be better for them than any of the ideals of the KMT. Even while Japan sat on China’s northern borders, an army poised to invade, Chiang sent his forces to assail the CCP in the south.

Chiang was determined to destroy the Communists.

In 1937, Japan invaded China and once again the CCP and the KMT were united. During the years of war with Japan, the KMT gained massive amounts of war aid from America. However, by then the KMT’s leadership was failing, and corruption was rampant. Very little aid provided by the US filtered down into the war effort. The KMT’s leader, Chiang Kai-shek seemed to only want to better himself and eliminate the communists. When confronting Japan, the KMT held back it’s better troops, and throughout the war, Chiang Kai-shek was preparing himself for a confrontation with the communists.

When at last Japan was forced out of China and defeated in 1945, China broke into civil war. The communists were still inferior to the Nationalists, but in the space of a few years, they had become much stronger. The CCP continued to use guerilla tactics against the KMT. Still backed by the US, the KMT failed to hold back the trickle of communism that was to become a flood. It was not long before the Red Army began to take the field in open warfare against the Kuomintang. In 1949, remnants of the KMT’s army fled from mainland China to the island of Formosa (Taiwan).

More than a decade before the KMT was forced to Taiwan, corruption was raging through the party. Chiang Kai-shek’s totalitarian regime was held together with a doctrine of fear and harsh punishments. Before the Japanese invasion, Chiang Kai-shek’s party was not really China’s government, but the most dominant warlord of the time. Between 1933 and 1937, Chiang had attempted to secure the Kuomintang’s grip on China, especially against the Communist Party. The Kuomintang ruled through corruption and cruelty.

Very little of the aid that poured into China during the fight against Japan actually helped the war effort. Instead it was used by Chiang to better his own standing, and to prepare for the coming conflict with the Communist Party. Following the war, Chiang appeared to have a massive advantage over the communists. He controlled the sea ports, lines of supply, was armed and equipped by America, and could field far more troops in battle. Due to poor leadership, however, the Kuomintang were soon cowering on the island of Formosa by 1949.

Chiang had promised the people democratic reforms, but he still continued to build for the dominance of his party alone. High ranking Kuomintang members took the US aid for themselves, and none worse than Chiang.

In contrast to Mao Tse-Tung of the Communist Party of China, Chiang Kai-shek brought disastrous consequences upon his party. While Mao was out appealing his ideals to the common peasant, Chiang was losing favor in every social class in China, not only the peasants, but the city businessmen of China as well. Chiang failed to provide democracy to China, and ensured his own failure, by allowing corruption to run uncontrolled through the Kuomintang.

Why did the Communists gain control of China in 1949?. (2016, Jul 06). Retrieved from https://studymoose.com/why-did-the-communists-gain-control-of-china-in-1949-essay 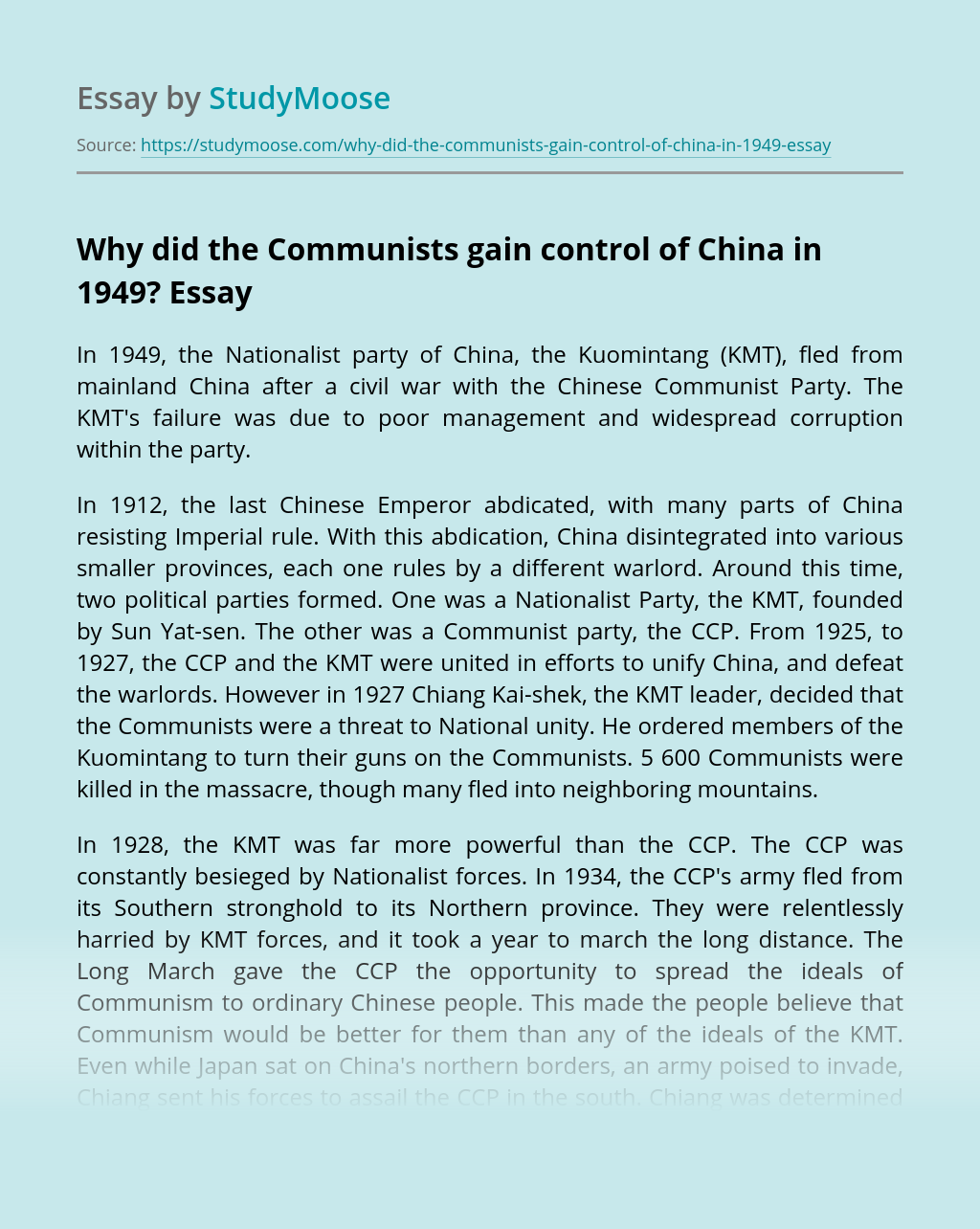