Joan Didion feels that the Santa Anna Wind have a negative effect on people and makes people act very different. Throughout the passage Didion’s tone is negative and uneasy; and the same goes for her diction. She creates images that are negative, so the reader can understand her true thoughts and feelings toward the Santa Ana winds. She also gives details of the human behavior while the Santa Ana takes place. Didion opens up the passage by describing the Los Angeles air and implies that a negative change is coming:” There is something uneasy in the Los Angeles air this afternoon, some unnatural stillness, some tension…” (1-2).

In the first two lines Didion creates an uneasy mysterious tone to convey her argument; that the Santa Ana causes distinctive changes in the people who are in the area. When Didion speaks about the stillness and the uneasiness in the air it gives the reader an idea of how the air is changing. Didion closes the first paragraph by stating that “to live the Santa Ana is to accept consciously or unconsciously, a deeply mechanistic view of human behavior” (14-16).

Didion says that the Santa Ana has a strange and negative effect on people whether they realize it or not and the behaviors the winds bring are just something people have to deal with. In the second paragraph of the passage, Didion describes how the people in the area change and how their actions change: “My only neighbor would not come out of her house for days… and her husband roamed the place with a machete” (25-27). The tone continues to be uneasy as well as mysterious because one now wants to know what the man would be doing with a machete and how can a wind can create this type of action.

This ties into her thesis of how the Santa Ana can change a person’s behavior and creates a negative effect on people “consciously or unconsciously”. Didion’s diction is also negative when she speaks about the Santa Ana: “ The heat was surreal. The sky had a yellow cast, the kind of light sometimes called earthquake weather” (23-25). When she uses the word “surreal” she uses tactile imagery so the reader can understand just how hot it is. When Didion describes the sky as “ earthquake weather” it is negative because an earthquake is never good; since it is a natural disaster. This shows how Didion feels negatively towards the Santa Ana and how it changes the air around the people change as well. In the third paragraph Didion describes the effects the Santa Ana has on humans. Didion also describes foehn winds, the equivalent of a Santa Ana in European countries. Didion quotes Raymond Chandler who wrote that “every booze party ends in a fight. Meek little wives feel the edge of the carving knife and study their husband’s necks” (31-33).

The implication this quote makes is that the Santa Ana causes people to have murderous mindsets and that drunks will be out to kill; and wives will want to kill their husbands. This makes the reader feel uneasy about the Santa Ana just as Didion feels. Didion shows how the foehn has a negative effect on people medically: “whenever and wherever a foehn blows, doctors hear about headaches, and nausea, and allergies, about nervousness and depression”(46-48). This shows how the foehn has a negative effect people’s physiological beings. Didion also shows the psychological effects of the Foehn and Santa Ana have on human beings: “In Switzerland the suicide rate goes up during the foehn, and in the courts of some Swiss cantons the wind is considered a mitigating circumstance for crime” (51-53).

This shows how the Sana Ana/foehn has a negative effect on people. Usually when people commit suicide they’re struggling with a psychological issue that causes them to feel the need to end their life. Didion implies that because the wind is so terrible it causes people to commit suicide. This detail gives insight to the seriousness of the winds and gets reader to think that the winds do show the “mechanistic view of human behavior”. Didion feels that the Santa Ana wind has a negative and altering effect on people in the area. She has a negative and uneasy tone throughout the passage because she strongly dislikes the wind and she makes that known to her readers. Didion gives examples of the negative change in human behavior during the Santa Anato convey his argument. 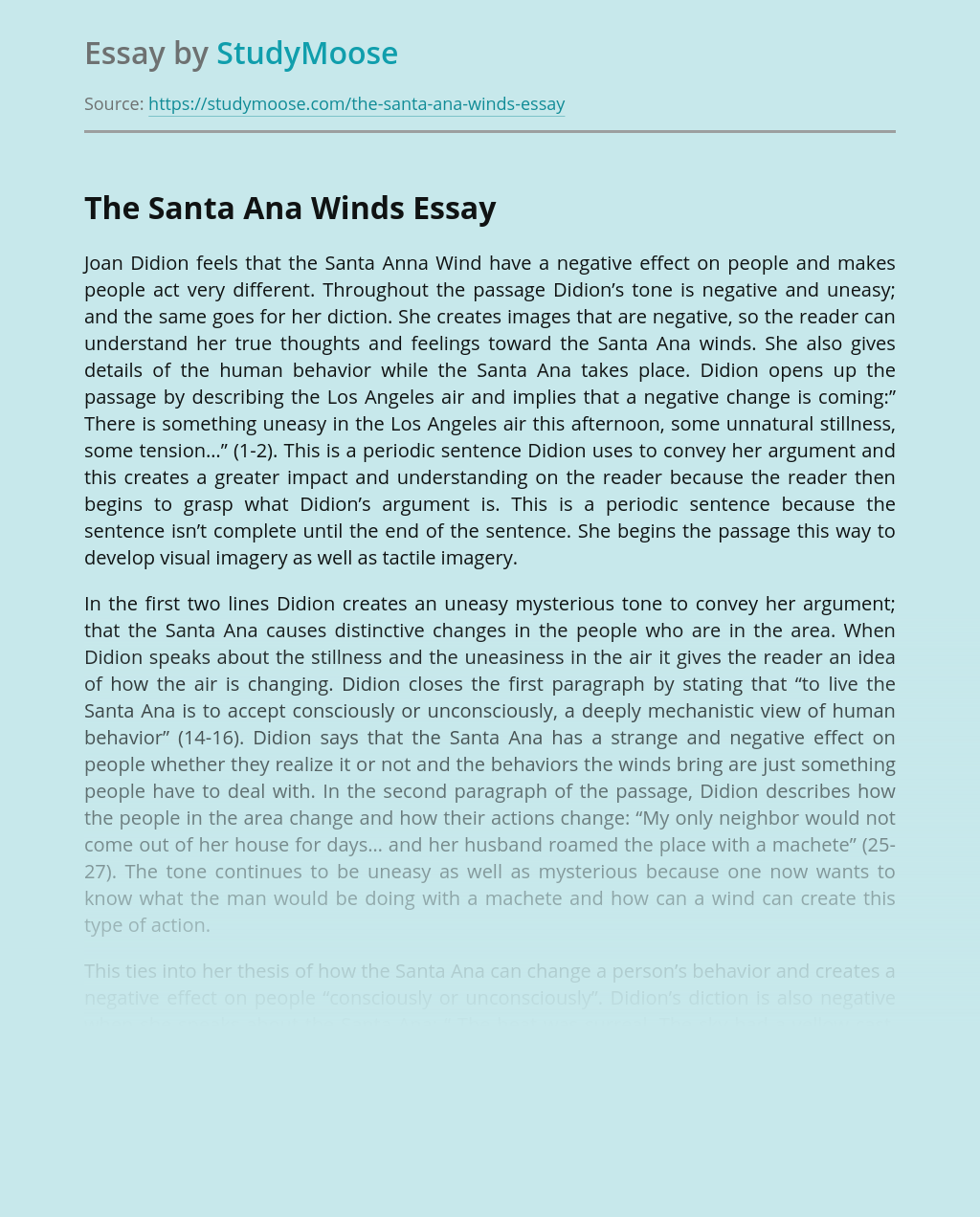