The Rise and Fall of Feudalism

Feudalism, as a decentralized political system, flourished in Medieval Europe. In this essay, the main political and economic characteristics of Feudalism will be mentioned, while discussing the main historical factors to the rise and fall of feudalism. The rise of Feudalism was a direct result of insecurity that caused by several significant historical factors. At first, the collapse of Roman Empire that led to prolonged unrest and power struggles was essentially a reason for why Europe was divided into many small states.

Don't use plagiarized sources. Get your custom essay on
“ The Rise and Fall of Feudalism ”
Get custom paper
NEW! smart matching with writer

The frequent fights among those states made people suffered from violence and insecurity.

Even though Charlemagne united those states and Europe lasted for a period time of peace, Holy Roman Empire eventually fall and was broken into three weak kingdoms after he died. Afterwards, invaders, who were Muslims from south, the Magyars from Asia and the Vikings from Scandinavia, frequently attacked Europe. At that time, everything became insecure; people were more willing to stay home safely instead of travelling; political authority was concentrated at local places while economic development was limited locally without trade.

Therefore, the fall and division of Holy Roman Empire and the rise of Barbarian kingdoms were another two historical factors. Under such situations, people were more willing to give up freedom in exchange for security and other basic needs, which cultivated the development of feudalism. Seizing the opportunity, wealthy nobles, seeking to expand their power and land holdings, began to fight with one another for territory, which eventually emerged into a new political and social system called feudalism.

The basic political structure is a system based on the exchange of land for military service. There was a hierarchical ranking system that ranked in an order of military power; men with the higher military power deserved the higher rank. Those people who owned military power were essentially nobility. The king, as the center of this system, played a role of granting ownership of lands to lords who were supposed to provide warriors and money in return.

The lords, who held lands, granted knights the possession of the land that was known as fiefs. In order to exchange for the military and non-military service, peasants had to provide some goods and service to the lord and knights. The obligations and corresponding rights between lords and vassal regarding to fiefs construct the feudal system. In terms of economic characteristics of feudal system, it was agricultural with little or without trade, and exchange was mainly operated with barter.

Because religious beliefs discouraged trade for profits and accumulation of private wealth, Europe under feudal system was a largely self-sufficiency economy that was dominated by local powerful landowners who contributed the most domestic production. In addition, serfs, as people without rights or independence, had to forfeit virtually everything to survive while they were burdening heavy taxes. The success of Feudal system created a new age of prosperity and progress, which eventually became outmoded because of the following historic factors.

At first, during the 12th and 13th centuries, Europe moved from a largely self-sufficiency economy to an economy geared to trade, which required demand massive money growth rather than goods; fiat money system substituted barter system. This significant economic change led to a revival of commerce and accelerated the economic growth of Europe. The strong Economic growth raised the standard of living of people and motivated people to pursue better life quality, such as purchasing freedom. The second reason would be decline of serfdom.

The revival of commerce and the widespread use of money changed the relations between feudal lord and serf. Some lords began to rent out their lands to tenant farmers. Using those lands, serfs engaged themselves into trade, which allowed them to substitute a money payment for their feudal obligations and become tenant farmers. In the 14th century, the labor shortage caused by the Black Death led to a rise of bargaining power of serfs; many serfs’ wages raised and became able to purchase their freedom while feudal lords lost their power by the end of the Medieval Europe.

At third, as stability and security in Europe gradually came back, the existence of a feudal knight’s military service became unnecessary. What monarchs were more willing to do is assemble large mercenary armies at relatively low cost. Based on all of the factors above, feudalism was replaced by a system of government that brought the birth of modern capitalism. In conclusion, while feudalism functioned very well in the insecure and undeveloped period of early Middle Ages, its end was inevitable under the powerful push of historical trend in terms of politics and economics.

The Rise and Fall of Feudalism. (2016, Nov 05). Retrieved from https://studymoose.com/the-rise-and-fall-of-feudalism-essay 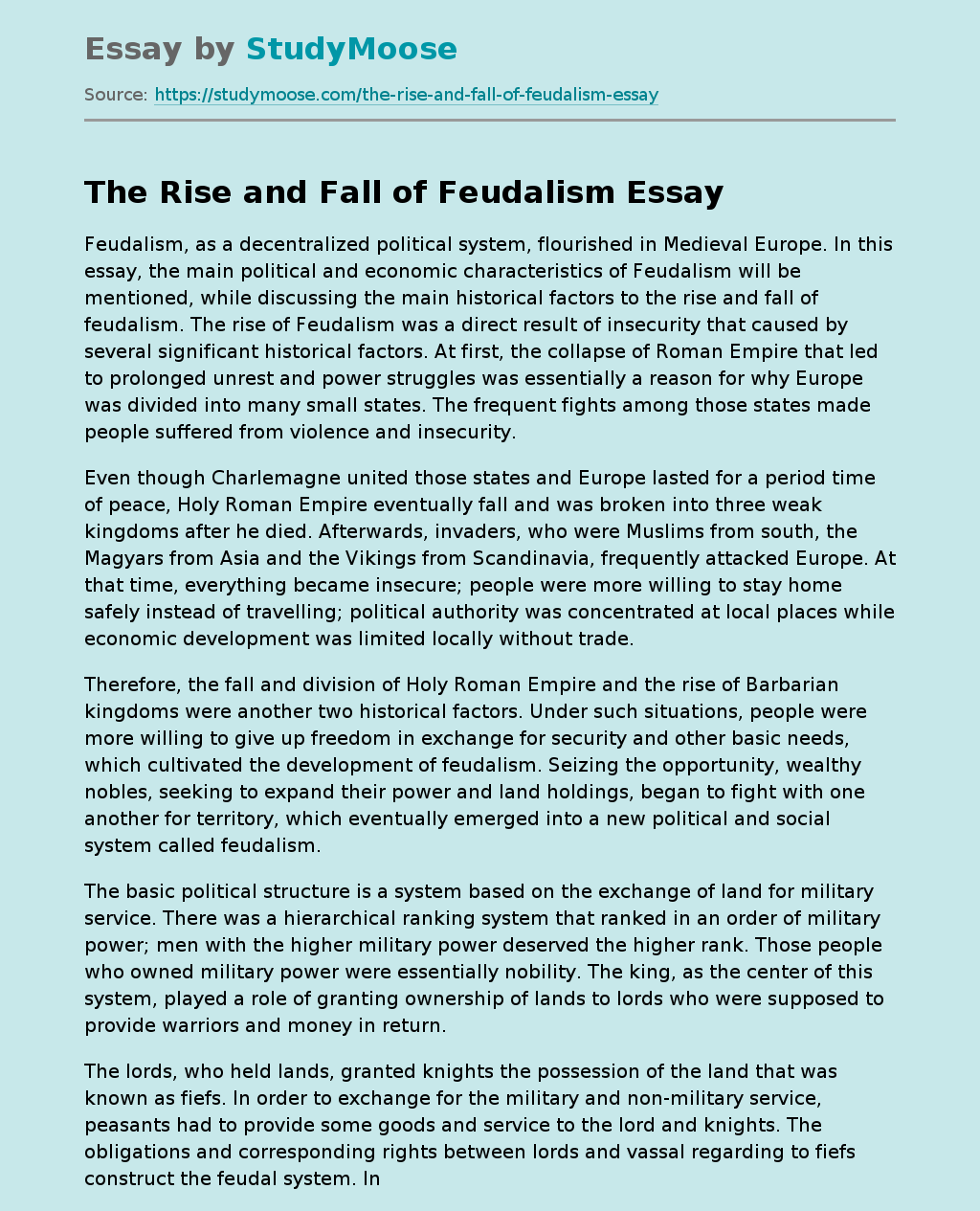