"All Quiet on the Western Front" Book Review

Erich Remarque’s All Quiet on the Western Front has death and innocence that provides an in-depth view of soldiers and tensions that they may face during the Great War. This novel shows the growth of a young man going into one of the greatest wars of that time. Erich Maria Remarque’s All Quiet on the Western Front is a controversial and a timeless story for all ages and a relatable story for all war veterans who are suffering from Post Traumatic Stress Disorder.

Don't use plagiarized sources. Get your custom essay on
“ “All Quiet on the Western Front” Book Review ”
Get custom paper
NEW! smart matching with writer

The reason for this book being so timeless is simply because the way Remarque was able to allow the reader to relive major events that are happening at that time period to the time period in which World War 1 was in.

The main character, Paul, is innocent in the fact that he has never been in a war before. He was never exposed to a violent death. He is grieving the deaths from his friends and the fact that he regrets killing a man down in one of the trenches.

This allows the reader to see that this book focuses on him attempting to overcome his own personal challenges from his time during battle. Remarque was able to finely illustrate what the battlefields during World War 1 looked like not through his descriptive words but by his own personal experiences on the front lines.

Remarque fought along the Western Front where he obtained numerous injuries just like the main character, Paul Baumer in the book. Erich was a German national and soldier for the German forces of the war.

All Quiet on the Western Front was a hit everywhere as it was translated into numerous other languages. However, Germany was infuriated at Remarque’s book as due to the fact that Germany thought of this book as him betraying the country. Remarque’s use of graphic descriptions allows the reader to grasp an understanding of what the western soldiers went through in battle. This creates and establishes a connection between the reader and any war veteran. Meaning, this lets the readers understand what former soldiers went through daily during the war. Stated earlier, the reader can compare any event in their life to a veteran’s stories.

Post Traumatic Stress Disorder is developed highly within soldiers due to the traumatic events that they go through on the front lines. Paul, our main character, develops PTSD and constantly thinks back to when he was in the trenches and remembers seeing dead men laying on the ground. He then thinks about the man he killed in the trenches and regrets his choice from that moment and so on. Due to the book being in chronological order, it shows the change over time for the soldiers in the novel, allowing to see time during the war change to show the progress of everything in this period.

One of the main ideas that shine through the novel is one thing that Paul mentioned. He stated that most of the men who start wars have never stepped foot on a battleground and those who have walked on the battlegrounds are the real fighters in the war. This is certainly true because most powerful leaders either have military experience and or little to none. These are the people who want to ignite great wars and will not step foot on the field. There is no mentioning of any religious connection. Usually, in most historical novels, there is at least one small mention of a religious aspect.

Remarque’s writing style is extremely unique in its own way. His writing makes the reader want to never put the book down due to his plot twisting events that make us establish a relationship without the main character. There is a negative tone throughout the mood due to the war and gruesome deaths placed throughout the novel. The negative tone allows the reader to feel sorry for the characters in the book who are going through their own personal issues, struggling to face the fact that all of their friends are dying one by one. Because the book was translated from German to Engish, some words in German might have been forgotten during translation. When Remarque writes about a soldier’s death, he does not spend too much time putting detail into it.

The symbols established through the novel allow the readers to infer in their own what each symbol means. For example, the “Iron Youth” shortly mentioned through the book relates to Paul’s generation. The Iron Youth is what Paul’s generation was called at the time. Like every generation has a name for example, “Baby Boomers” are the generation, of people who are fifty years and older. The “Iron Youth” is a collection of people Paul’s age who are young soldiers maintaining their country’s pride. In most novels, there is at least one aspect of a religious symbol, however, in this novel, there is no religious symbol. This book steps away from mentioning any central religious group. Although, there was one short mentioning of him trying to understand that there is a possibility that there might be a heaven and hell after death. He also tries to find the meaning of everything through the earth. All Quiet on the Western Front is one of the greatest historical novels of all time. Even if some think that this novel is a controversial piece of literature, it is still timeless and novel for all.

"All Quiet on the Western Front" Book Review. (2021, Mar 23). Retrieved from http://studymoose.com/all-quiet-on-the-western-front-book-review-essay 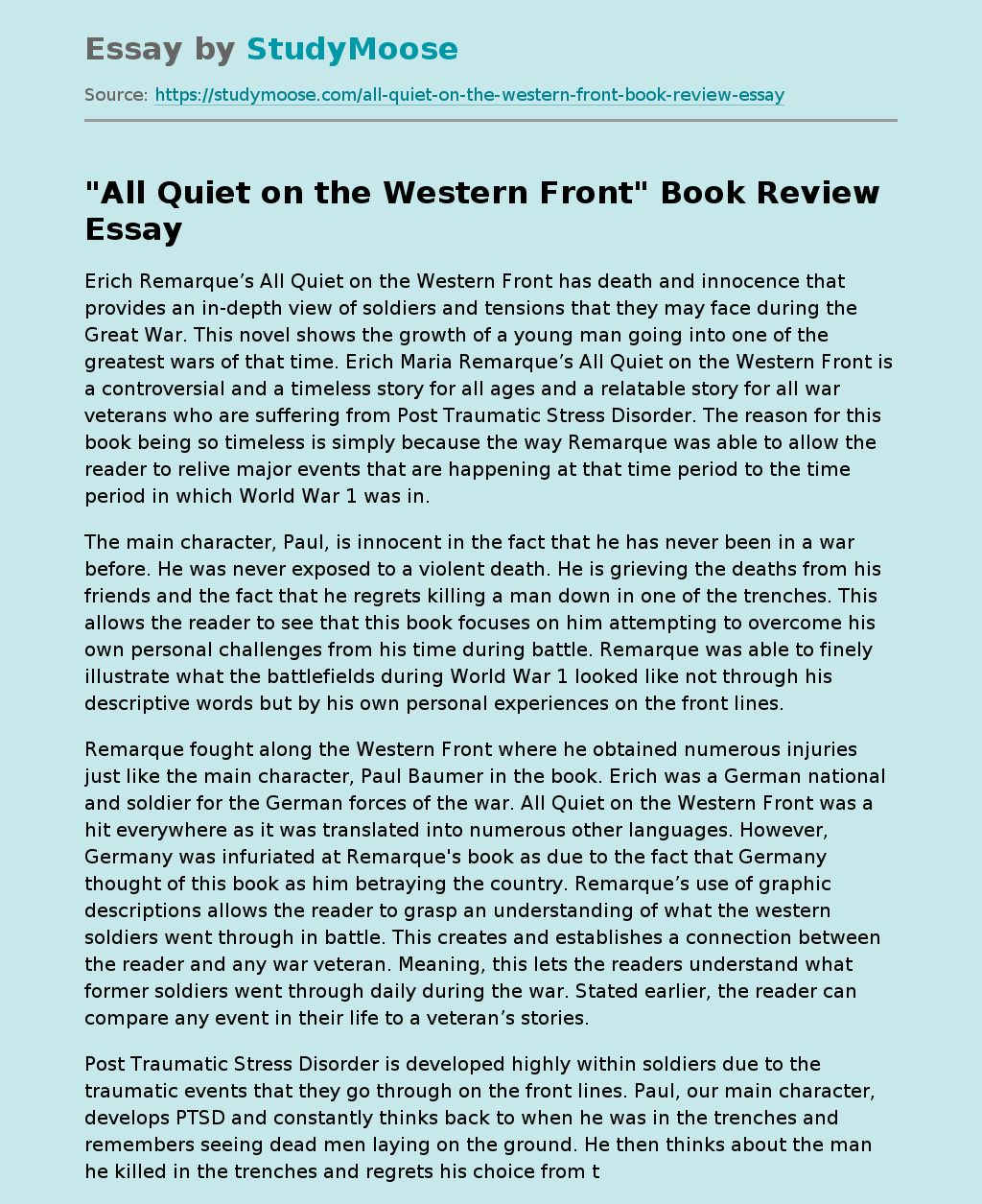