The object of psychoanalytic literary criticism, at its very simplest, can be the psychoanalysis of the author or of a particularly interesting character in a given work.

Don't use plagiarized sources. Get your custom essay on
“ The Small Key Book Review ”
Get custom paper
NEW! smart matching with writer

In this directly therapeutic form, the criticism is very similar to psychoanalysis itself, closely following the analytic interpretive process discussed in Freud’s The Interpretation of Dreams and other works. Critics may view the fictional characters as a psychological case study, attempting to identify such Freudian concepts as Oedipus complex, penis envy, Freudian slips, Id, ego and superego and so on, and demonstrate how they influenced the thoughts and behaviors of fictional characters.

Paz Latorena, the youngest among the four children of Florencia Manguera and Valentin Latorena, was born on Jan. 19, 1908 in Boac, Marinduque. She finished basic schooling at St. Scholastica’s College in Manila and the Manila South High School (now the Araullo High School). In 1926, she took up Education at the University of the Philippines (UP) in Manila where she also attended a short story writing class under a key figure in Filipino literature in English, Paz Marquez Benitez of “Dead Stars” fame.

Before the year ended, the Marinduque native won the third prize in Jose Garcia Villa’s Roll of Honor for the Best Stories of 1927 for her story, “The Small Key.” For her final year of college in 1927, Latorena transferred to UST to finish her Education degree. She became the literary editor of the Varsitarian and published her poems, “Insight” and “My Last Song,” under her nom de plume Mina Lys. In 1943, Latorena authored her last story, “Miguel Comes Home.” She died a decade later, on October 19, 1953, of cerebral hemorrhage. III.The Story

On a deserted farm, a married couple named Soledad and Pedro Buhay settled, surrounded only by a wide land of prosperously growing plants. Although it appeared to be a peaceful life, Soledad did not find it quite as satisfying as her husband did. She became very familiar of the place that even with her eyes closed; she would be able to know exactly how everything looked and where they were all placed. All day, she would only look outside their house as if she was expecting to see things differently each day. Even though her husband could always find chores that make him busy, it was completely opposite for Soledad because she always seems to be seeking for excitement.

Pedro assured her that when their crops reach harvest time, it would give them plenty but she was not happy with it. While her husband was having his meal, she stood near him and asked him where his shirts were. She decided to seam some of them that were already worn out and had holes in it. He told her that it was all in his trunk so he reached to his pocket were he took out a big key and a small, rusty key. Pedro only gave Soledad the big key for the trunk where he kept all his shirts in. When they were talking to each other on the porch, the husband took off his coat and handed it to his wife. Because he left to go by Tia Maria’s place, she folded the coat and consequently dropped the small key. Soledad looked uncomfortable and uneasy while she stared at the key. It was seen that the key was important to her husband while she was suspicious of it.

For a moment, she took away her mind of it and mended the rest of her husband’s shirts. After finishing folding the shirts, she was left with nothing to do and all that she was thinking about was what in the other trunk. When she could not resist it anymore, she tried to open the other trunk where she found the all clothes that belonged to his husband’s first wife. She became curious as to why his husband still has them after all those years that passed. She was dismayed that her husband might still love his first wife even though she has been dead for years. It occurred to Soledad that those memories of Pedro’s first wife’s belongings could cause their relationship to be destroyed. She became filled with fear and hatred towards it.

Finally, he returned home only to find his wife in bed. She almost seemed to have fever but she actually did not. In the next morning, Pedro woke up to a pile of ashes and some half burnt clothes in their backyard. He was surprised of what happened and realized that those were the things that his late wife owned. He went to the small trunk to confirm that it was the ones he stored in there. When he was certain about it, he became furious and wanted Soledad to explain herself for doing it. Even after this incident, he knows that he would forgive her because he truly loves her but he would always have the grudge towards her for doing it.

The theme of the story is about trusting each other within a relationship. In any relationship, the essence of trust is not in its bind, but in its bond. So hold the hand of the person who will never release your hand rather than the person you love. A very nice adage that reminds someone on the importance of trust in every relationship. Love is indeed just a four letter word that is so easy to say, so easy to spell but so hard to understand. In life people do something to satisfy themselves even when they are fully aware of what the consequences of their actions will be.

Pedro felt somewhat angry because his wife burnt the clothes of his past wife because the memories of his past was not gone even before he was ready to let it go. However, he understood that his wife only did that because she loved him, and she has a right to be jealous of a dead woman who still owns half of her husband’s heart. Let’s just say that the small key represents Pedro’s first wife, and the large one represent his present wife, and the keys represent how immense are his love for his wives. We can’t tolerate Pedro’s feeling but we can’t also agree what her present wife did. Because of the green-eyed of his wife that portrays the lacks of trust and faith which should be one of the main attributes of marriage, maybe because she is afraid that he cannot take over the position of his husband’s first wife.

Meanwhile in Pedro’s case we can obviously see that he still have this so called ‘feelings’ for his wife, let’s say that maybe the reason why is, he could not deny that for once in his life he made a promise which is a life time pledge in front of God and even the people that he swore to his first wife, he will going to love her for the rest of his life till death do us part. These memories will continue to remain, especially because these memories of his and his wife are ones that could not easily be erased. But if he just quickly said at that moment or he already said to his present wife that these clothes are just serves as memories of his past wife, I think it will not be that painful in her wife’s feelings. For the woman there will always be doubts if the husband will ever be ready to let go of the small key no matter how small it is.

There complication or main point of the story when Soledad saw a small key and opened an old trunk/ torn garments of Pedro’s first wife. Immediately, Soledad felt angry and jealous because Pedro still treasure the things of his first wife. And because of that, Soledad burned all clothes and garments without consulting Pedro and hearing his reason why he kept a thing that Soledad didn’t know. When Pedro knew what Soledad did, instead of being angry. He eventually forgive and understand his wife. 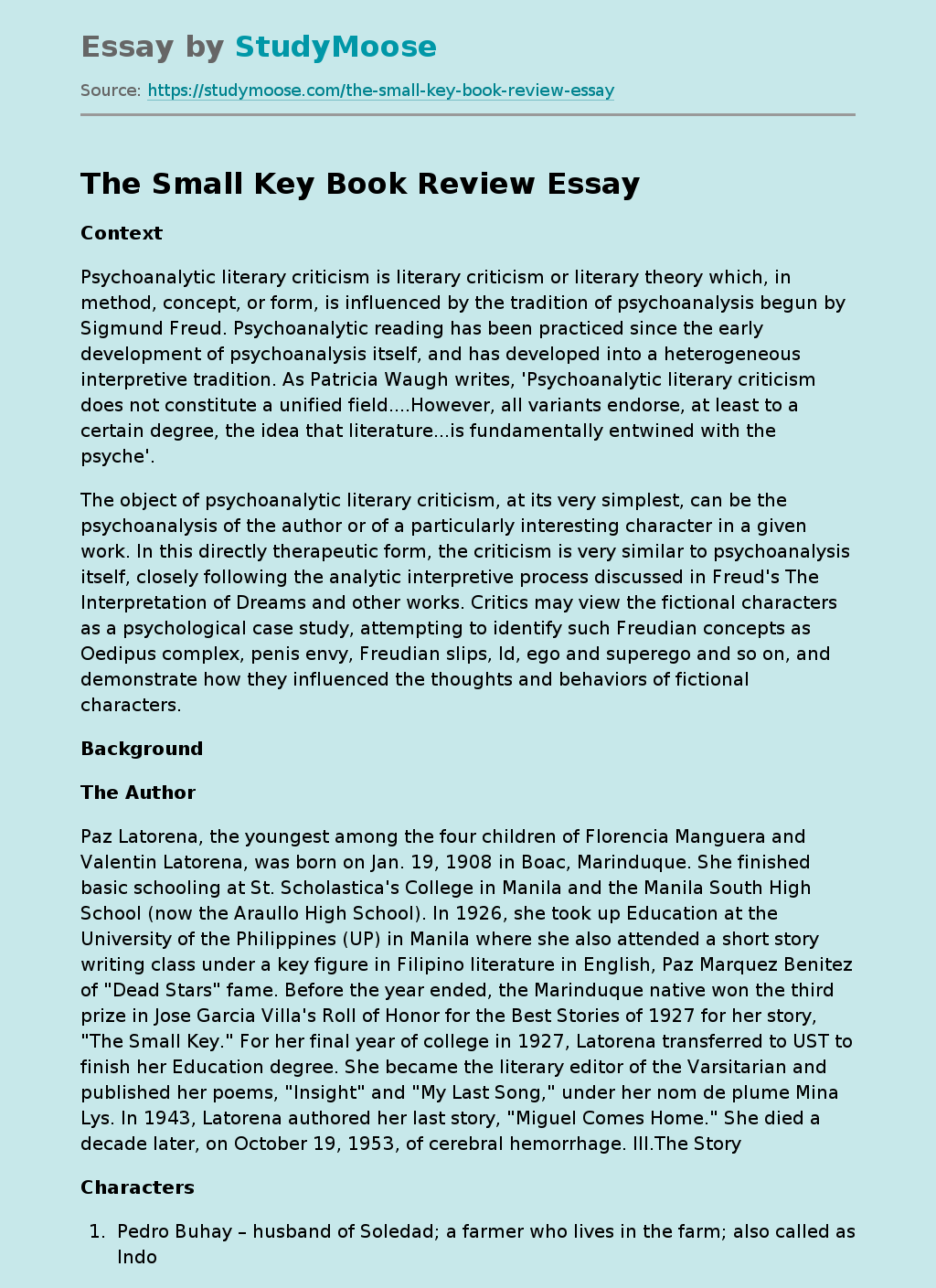