Analysis of "All Quiet On The Western Front"

All Quiet on the Western Front is a fictional novel written by Erich Maria Remarque in 1928 and it became an instant classic. He drew inspiration from his own life, being drafted into World War One and being wounded at the Battle of Flanders by British Artillery. Throughout the book Remarque uses vivid imagery and descriptive vocabulary to show the reader about the harsh grotesqueness of war and the seemingly inescapable amount of sorrow and problems created by this conflict.

Throughout All Quiet on the Western Front Remarque uses a broad array of language as the driving force of this book.

Don't use plagiarized sources. Get your custom essay on
“ Analysis of “All Quiet On The Western Front” ”
Get custom paper
NEW! smart matching with writer

It is because of the clear and depictive vocabulary that we, the reader, are able to see how being in World War One affected a entire generation. The story starts out with Paul Baumer and seven other soldiers he is serving with. At the beginning of the book they are mostly behind the front line with the exception of one time when they are sent to relieve the front.

When they return they all agree that it was quite, which is the last time most of them will be able to say anything is quiet. From this point forward the book changes as they are in the front lines more and more. The book is filled with numerous sounds of bombs being shot and blowing up, airplanes fighting in the sky and exploding, and the sounds of death.”It’s unendurable. It is the moaning of the world, it is the martyred creation, wild with anguish, filled with terror, and groaning”(Remarque 62).

The use of vocabulary in All Quiet on the Western Front also helps us feel how Paul is feeling. Throughout the story his emotions and thoughts are constantly changing because of the constantly changing war. He often feels like the war has robbed his entire generation out of life. Instead of graduating and finding a useful occupation he has become a soldier who is only accustomed to death and killing which will not help him in the world outside of the war. He also feels as though his generation will not be able to cope with the atrocities of war because neither the generation before or after him will fight a war like his. Finally, Paul often questions himself on whether the war will ever end and if he will make it out alive. From the middle of the book ,after his visit home on leave, his mood changes from being gloomy and feeling the he will not be able to escape the unending war to the end of the book when he feels like he might be able to survive the war because he feels the war is ending soon. However, he is unable to as he dies one month before the Armistice that would end the war is signed. “He fell in October 1918, on a day that was so quiet and still on the whole front, that the army report confined itself to a single sentence: All quiet on the western Front. He had fallen forward and lay on the earth though sleeping. Turning him over one saw that he could not have suffered long; his face had an expression of calm, as though almost glad the end had come”(Remarque 296).

In conclusion, Remarque´s classic novel, All Quiet on the Western Front, used extremely descriptive vocabulary that helps the reader understand and feel the struggles of the First World War. While also bringing awareness to the mental problems created by it. All Quiet on the Western Front is a very descriptive book that uses Remarqueś own style to create very grotesque yet moving novel.

Analysis of "All Quiet On The Western Front". (2021, Mar 23). Retrieved from https://studymoose.com/analysis-of-all-quiet-on-the-western-front-essay 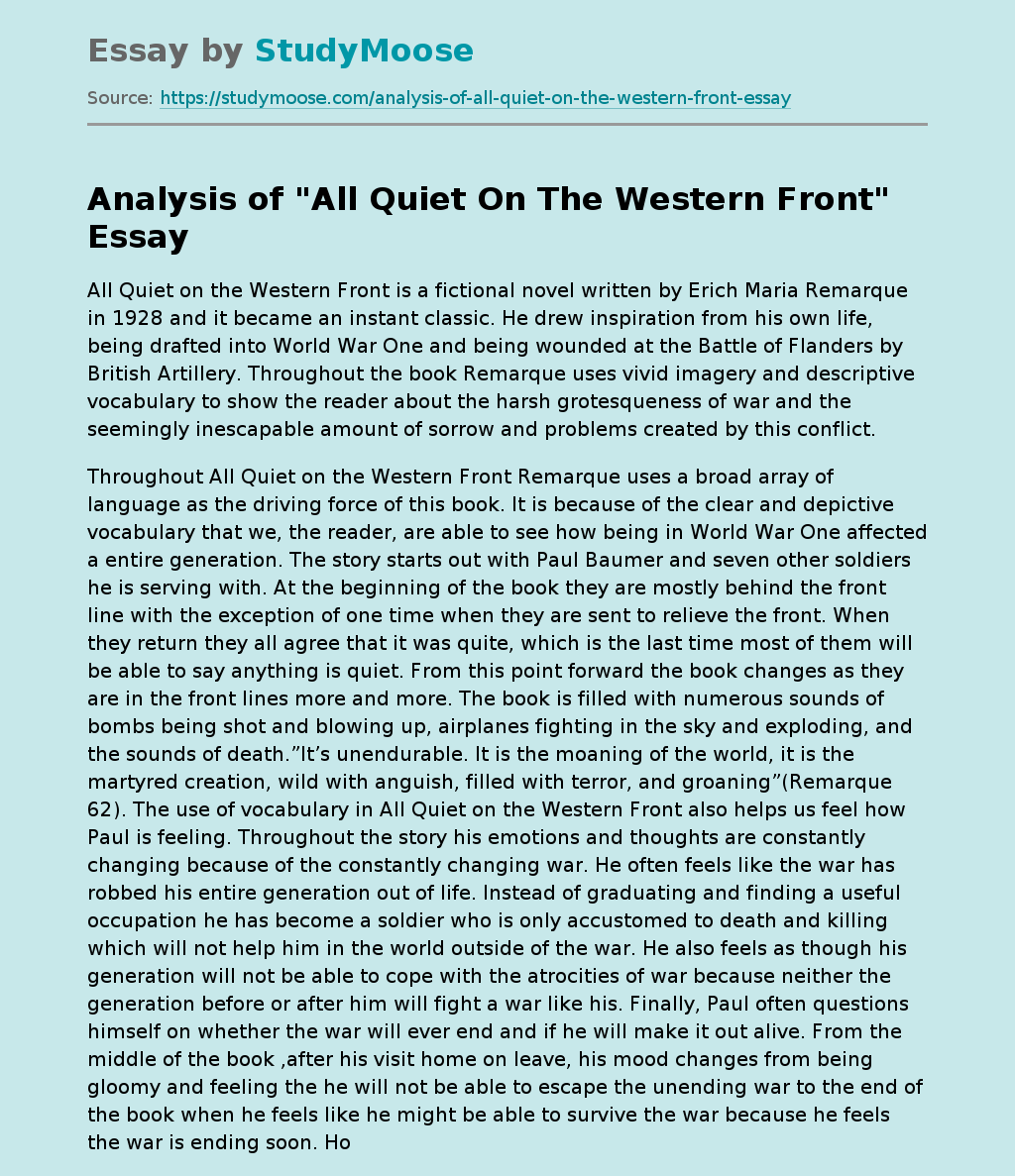