Traits of Paul Baumer that changed during the war

“I am young, I am twenty years old; yet I know no thing of life but despair, death, fear, and fatuous superficiality cast over an abyss of sorrow….” said by Paul Baumer during his time at war in All Quiet on the Western Front. This quote represents how the war changed Paul’s view and attitude toward life. Paul, a once hopeful, sensitive boy, enlisted into the war right out of school, faced traumatizing experiences that changed him into a lonely man who saw life in a bitter, pessimistic way.

Don't use plagiarized sources.
Get Your Custom Essay on Traits of Paul Baumer that changed during the war Just from $13,9/Page

In All Quiet on the Western Front, Paul comes into the war as a young and optimistic boy. The war is a fresh start for Paul and he holds many traits that eventually diminish through out the book. Entering the war after being convinced by a schoolmaster, Paul is positive and content. His elation is shown when he says, “Here it is beautiful. These are wonderfully carefree hours. Over us is the blue sky.

On the horizon float the bright yellow, sunlit observation-balloons, and the many little white clouds of the anti-aircraft shells.” Along with his positivism and happiness, Paul is also trusting.

He demonstrates his trust for the elder soldiers in charge by saying, “We often made fun of them and played jokes on them, but in our hearts we trusted them. The idea of authority, which they represented, was associated in our minds with a greater insight and a more humane wisdom.” In the early times of the war Paul is also immature. He demonstrates an act of immaturity by dumping a latrine-bucket on Himmelstoss along with other practical jokes. The war has not been deep yet and Paul, a boy who feels happiness, enthusiasm, and positivism, has yet to experience the harsh, life-changing factors of the war.

While the war progresses, many factors and events cause Paul to become a different person then he started out as. The everyday struggles to survive in the war are causing Paul to become bitter and lost. A main factor that has resulted in Paul changing is the overall violence and struggle to survive in the war. Seeing soldiers die around him and running from guns and fire has made Paul ruthless. Paul proves this by remarking, “If your own father came over with them you would not hesitate to fling a bomb at him.” When Paul is on leave from the war and returns home to his family, he realizes how much the war has taken him away from civilization. During his visit with his family, he sees old friends and remembers how it was when he lived there and says, “When I see them here, in their rooms, in their offices, about their occupations, I feel an irresistible attraction in it, I would like to be here too and forget the war; but also it repels me, it is so narrow, how can that fill a man’s life, he ought to smash it to bits; how can they do it, while out at the front the splinted are whining over the shell-holes and star-shells go up, the wounded are carried back on waterproof sheets and comrades crouch in the trenches.

They are different men here, men I cannot properly understand, whom I envy and despise.” The situation where Paul begins to see the uselessness of the war and that his enemies are similar to him is when he kills the French soldier. In this situation Paul comments to the dead French soldier he has killed, “Forgive me, comrade, we always see it too late. Why do they never tell us that you are poor devils like us, that your mothers are just as anxious as ours, and that we have the same fear of death, and the same dying and the same agony-Forgive me, comrade; how could you be my enemy?” These events and factors, along with many others, are the key points in causing Paul to change during the war.

As it gets deeper into the war, Paul changes from the boy he used to be when the war started. His experiences in the last few years have made him see things differently, depressed, and all alone in the world. After all he has been through, Paul is not out of place with the civilized world. “At that time I still knew nothing about the war, we had only been in quiet sectors. But now I see that I have been crushed without knowing it. I find I do not belong here anymore, it is a foreign world.” This is how Paul feels after returning home to his family for a short time. After going through traumatizing situations and experiencing the war, Paul is now mature and grown.

He proves that he has changed from a boy to a man by commenting, “I would like to weep and be comforted too, indeed I am a little more than a child; in the wardrobe still hang short, boy’s trousers-it is such a little time ago, why is it over?” Paul has lost many friends to the war, has seen many soldiers die in front of him, has lost touch with the outside world, and is now lonely and ready to face death. Paul says some of his last words, “I am very quiet. Let the months and years come, they can take nothing from me, they can take nothing more. I am so alone, and so without hope that I can confront them without fear.”

After bloody years at war where Paul faced more horror than most people ever will in a lifetime, he dies. He came into the war as a young optimistic boy and went through many experiences, which changed him dramatically into a mature, hardened man. Erich Maria Remarque, author of All Quiet on the Western Front, went on to write of Paul, “Turning him over one saw that he could not have suffered long; his face had an expression of calm, as though almost glad the end had come.”

Traits of Paul Baumer that changed during the war. (2016, Jun 19). Retrieved from https://studymoose.com/traits-of-paul-baumer-that-changed-during-the-war-essay 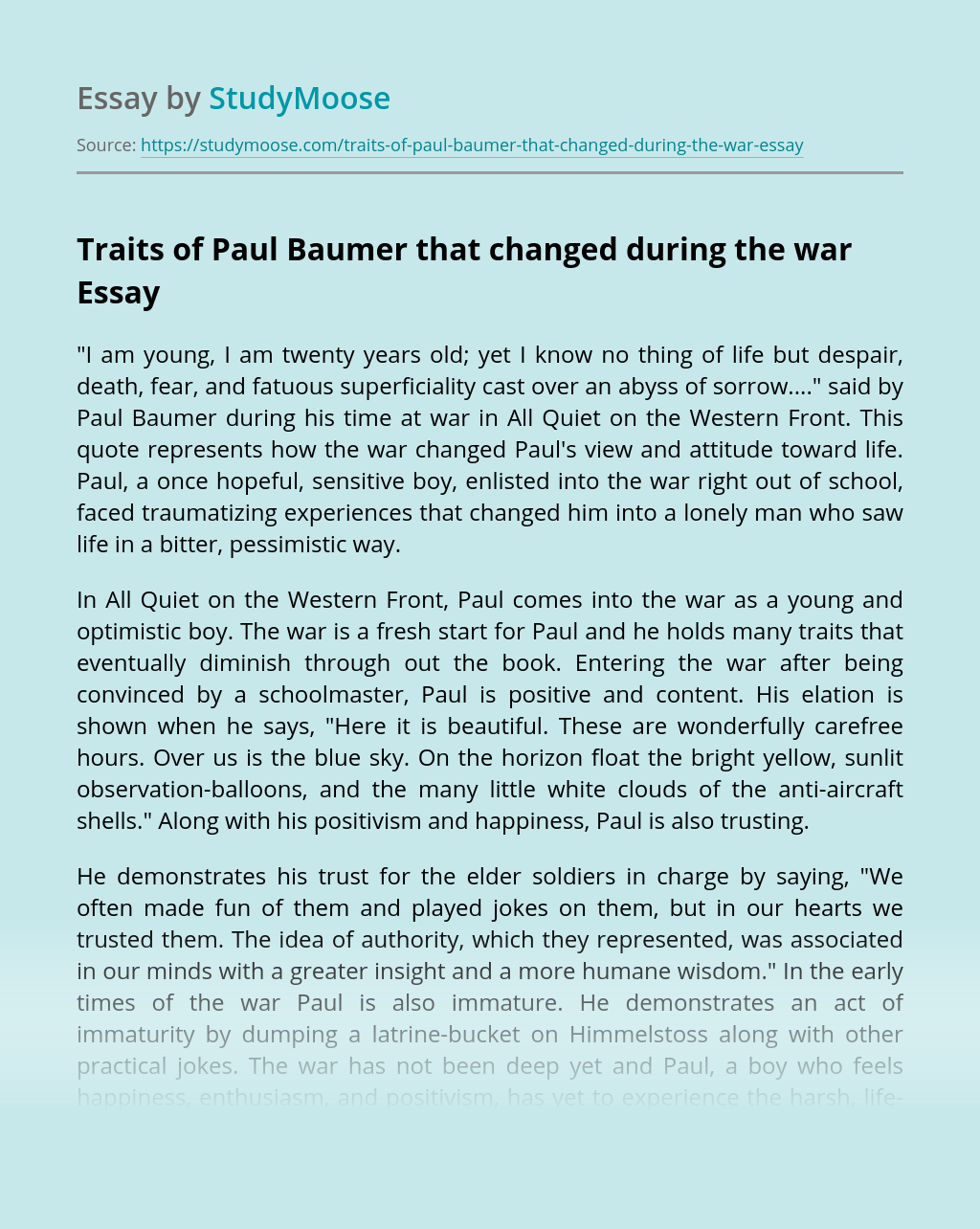 The Distinctive Positive Characteristics of the Western Civilization

Civilization emerged in the Middle East over five thousand years ago, and a variety of civilizations have flourished on the earth ever since. However, they all have only been a prelude to the unique Western civilization, which has finally been able to release the true potential of human mind during the dramatic transformation of thinking...

Geography’s Impact on Mesopotamia and Egypt

The ancient river civilizations of Mesopotamia and Egypt were a significant aspect of our world’s development from an uninhabited planet to the cultured society known today. The geographical features of their regions heavily affected how their people lived and their relationship towards other countries. Both ancient Mesopotamia and ancient Egypt used their rivers as important...

Get Essay
Were Vikings Barbarians or Representatives of a Civilization

Were the vikings barbarians? First of all, we must decide what a barbarian is. A barbarian is a foreigner who is without culture, education nor manners. Somebody who is savage, uncivilized, crude and who acts like an animal would. But it is all a point of view, to today’s standards eating human flesh is a...

The Mughul empire was founded by in 1526, when he defeated Ibrahim lodhi,the last of the delhi sultans at he first battle of panipat. The mughuls were a powerful dynasty and left a profound impact on the thoughts and arts of the sub continent. This is a brief chronology documenting the time when the mughuls...

From 600 BCE to 600 CE, known as the classical period, Greece and Han China began to develop. These empires were extremely important and successful. However, despite their success, Classical Greece and Han China had major similarities and differences in their political, technological and economic/environmental views. These societies were similar in the fact that they...