The Dehumanization and Corruption of Wealth

In the Great Gatsby written by F. Scott Fitzgerald in 1925 the author follows a group of wealthy people living in New York separated by east egg and west egg in long island . Fitzgerald uses characters , plots, and symbols to reflect upon the corrupting and dehumanizing nature of wealth often seen during the roaring 20s or jazz age.

Fitzgerald’s use of symbolism is used throughout the novel to show how money can degrade people. In the great Gatsby, Tom Buchanan is a wealthy man who has been corrupted by his own greed.

Don't use plagiarized sources. Get your custom essay on
“ The Dehumanization and Corruption of Wealth ”
Get custom paper
NEW! smart matching with writer

His greed leads him to commit many immoral acts that are not only morally wrong but also destructive. This is seen in chapter 2 when he breaks Myrtle’s nose after repeatedly saying his wife’s name . ‘Daisy! Daisy! Daisy!’ shouted Mrs. Wilson. ‘I’ll say it whenever I want to! Daisy! Dai –– ‘ Making a short deft movement, Tom Buchanan broke her nose with his open hand”. This shows that Tom sees his mistress as less than and lower than his wife Daisy who is of higher social standing.

He would never treat Daisy like that just because in his eyes she is worth more . Because Tom is richer than Myrtle and has more status he is allowed to get away with it, buying Myrtle a puppy to make up for it . Another example of the demeaning quality of excessive wealth is the symbol of the divide between West Egg and East Egg. The East and West Egg are separated by how they came by their money and their lifestyles.

Nick explains this saying“ I lived at West Egg, the—well, the less fashionable of the two, though this is a most superficial tag to express the bizarre and not a little sinister contrast between them. […] Across the courtesy bay the white palaces of fashionable East Egg glittered along the water”,… The East Egg represents the snobbish upper class that came from old money, passed down between generations that they never had to work for. The West Egg represents new money where things were never handed to them . The East looks down on the west egg because they are too flashy with their money throwing elaborate parties trying to flaunt their possessions. All these symbols show that money can lead to the belittling of people.

A theme that Fitzgerald also heavily used is the corruption of wealth. People often talk about the valley of ashes in a very dismal way and its where Tom’s mistress Myrtle lives and where people with not a lot of money live , “This is a valley of ashes—a fantastic farm where ashes grow like wheat into ridges and hills and grotesque gardens; where ashes take the forms of houses and chimneys and rising smoke and, finally, with a transcendent effort, of men who move dimly and already crumbling through the powdery air.” Because this place is run down and poor people live there it seems like a place you don’t want to be. The fact that Tom can take Myrtle out of this place and keep her around is only because he has enough money to corrupt George’s marriage and commit adultery . Another example of the deceit that obscene wealth creates is how Jay Gatsby, also known as James Gatz got his money. For most of the story Gatsby is not honest about where he got his money saying he inherited it and that he owned some stores but Tom finally reveals how he actually got it saying “He and this Wolfsheim bought up a lot of side-street drug-stores here and in Chicago and sold grain alcohol over the counter. That’s one of his little stunts. I picked him for a bootlegger the first time I saw him, and I wasn’t far wrong.’. Jay Gatsby got all his wealth and fortune illegally selling alcohol during prohibition but lied to many people about it . This shows that people will do things immoral and wrong just for wealth and that a large amount of money can corrupt you.

All in all F. Scott Fitzgerald uses many parts of the plot, relationships between characters and recurring symbols to provide commentary on the social happenings during the 1920’s and show how excessive wealth can lead to the belittling of people and the corruption of things once pure.

The Dehumanization and Corruption of Wealth. (2021, Sep 22). Retrieved from https://studymoose.com/the-dehumanization-and-corruption-of-wealth-essay 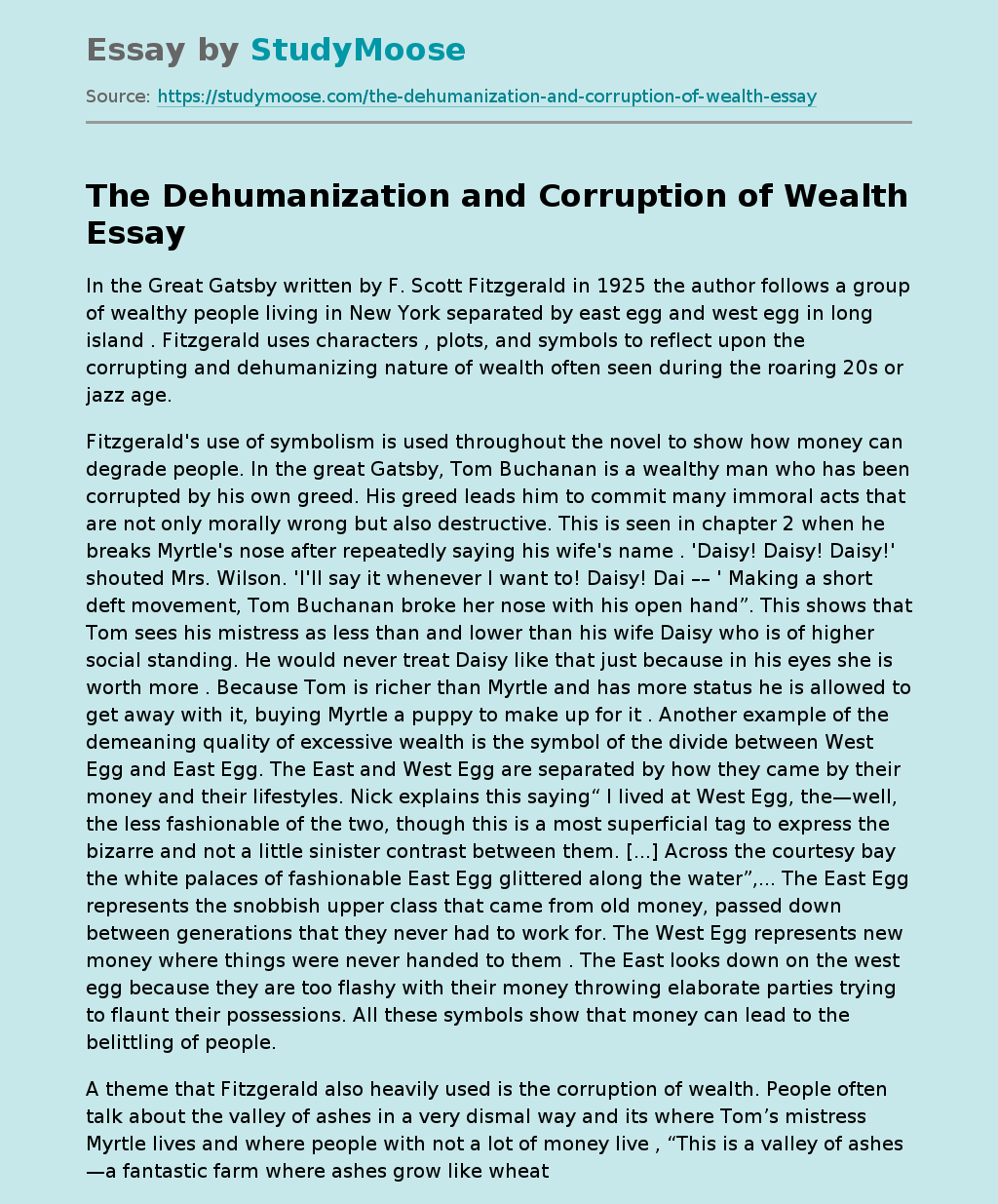