The Concept of Dehumanization in "Night"

Throughout the book Night, there is a great amount of dehumanization taking place in the form of starvation, forced labor, and brutality. Imagine you haven’t eaten in days, you are starving. Can you imagine yourself running in the freezing cold winter? You are running as fast as you can, fighting for your life. Do you think you could make it? That is one of the experiences the Jews had to face during the Holocaust. Elie Wiesel is the main character in the book, and that is how he felt in this book.

Don't use plagiarized sources. Get your custom essay on
“ The Concept of Dehumanization in “Night” ”
Get custom paper
NEW! smart matching with writer

Elie is a Jew during the Holocaust. His father and himself were sent to three concentration camps before they got liberated. At all of these camps, they face many difficulties that they ask themselves “is my life even worth living for anymore”.

Elie Wiesel often experienced starvation as a form of dehumanization. Elie starts to feel starvation when the Jews aren’t given anything to eat or drink.

They traveled to Gleiwitz and stayed for three days which means they couldn’t eat or drink for three days. After that his hungry stomach starves some more. Elie was surprised because that was one concentration camp he was sent to for a very short period of time. Not only that but it was the only camp that starved him. There was a quote in the book that showed dehumanization as starvation. The quote was “One day when we had stopped, a workman took a piece of bread out of his bag and threw it into a wagon.

” There was a stampede, dozens of starving men fought each other to the death for a few crumbs. The German workmen took a lively interest in this spectacle”. That quote shows how hungry the Jews were, that they were willing to give up their lives to just have a small piece of bread. Elie and his fellow Jews got used to starving. They promised each other that when they got out of there the very first thing they would do is eat.

Another example of dehumanization Elie faces in this book is brutality. “There was a strike of nothing but the whip”. That is a form of brutality because Elie saw something he wasn’t supposed to, so that is how they punished him. They placed him on a box and gave him twenty-five lashes on his back. Those twenty-five lashes almost killed him because he has not been eating or drinking. Another incident is when Elie’s father got struck on the head for no reason. His father woke up from a heavy dose, he fell on the ground again and crawled to his hands and knees. His father then walked to a soldier and just asked a very simple question. Instead of receiving an answer he got a hit on his head that almost knocked him out. Every Jew that stayed at the camp went home wounded and with scars everywhere on them.

The last form of dehumanization is forced labor. A quote in the book that shows forced labor is “The Kapo, too, tried to reassure me. He had given me easier work today. I felt sick at heart”. Elie had said in the book Night when he was way overworked and a point came where he couldn’t even do his regular duties anymore. All of his Jewish friends and his father had to encourage him to continue moving on. A Nazi soldier had beaten Elie so badly that he was covered in blood. The soldier then sent him back to work as if nothing happened. Elie was in a lot of pain but they still forced him to work as hard as he was before.

The Concept of Dehumanization in "Night". (2021, Dec 02). Retrieved from http://studymoose.com/the-concept-of-dehumanization-in-night-essay 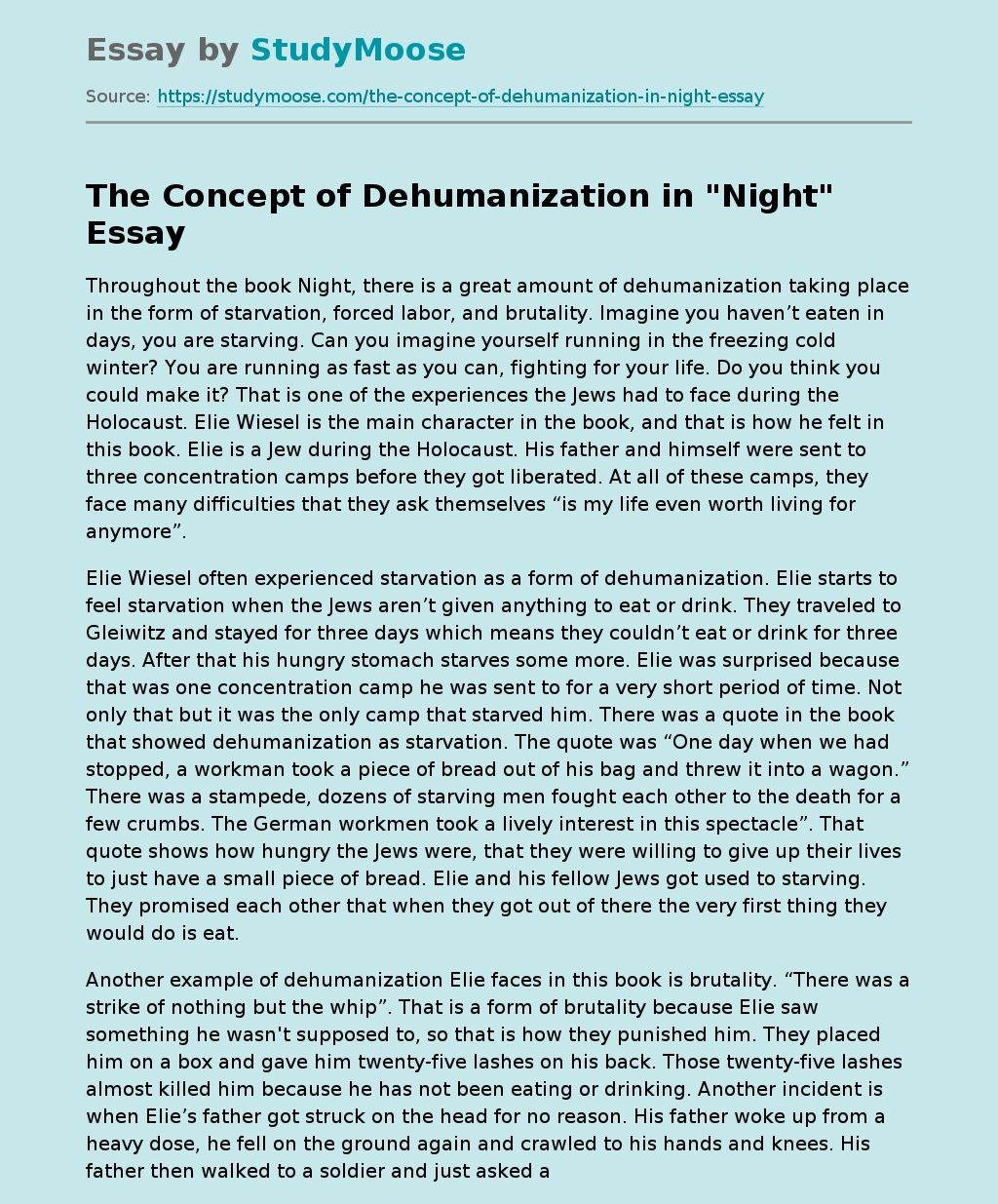