I was a normal girl when I was in elementary school, but after what I did, all my classmates worshiped me as a “hero.” I remember I was in grade five; my Chinese teacher was really cruel. If the students did not do their homework, he will punished the students by clapped their face. Not only the teacher could clap the students’ face, he also asked all the students in class to clap the punished student’s face. If anyone did not want to do that or clapped softly, he or she will be the one to be clapped next.

Don't use plagiarized sources. Get your custom essay on
“ Dehumanization, Peer Pressure and Fake Friends ”
Get custom paper
NEW! smart matching with writer

There was one student did not do his homework because his father died and he had to take care of his mother and sisters. He explained to the teacher, but the teacher thought he was lying so he asked all the students in the class to clap his face. As no one want to be the next victim they all clapped his face hardly.

Finally it’s my turn, but I could not do that because he was my best friend. I told the teacher “Sorry! I can’t.” The teacher answered me “Never mind, just be clapped 30 times, it’s not a big duel.” After that, I was standing in front of 30 people and waiting for them to clap my face. That was the most horrible time in my life; I was so scared and ran away. I just keep running to the principal’s room, I cried and told the principal everything that the teacher did.

Likewise, The Chocolate War shows the demands of tribalism, which compromises our humanity by deference to authority, sadistic dynamic of the dehumanization, double standard of morality and symbiosis.

The Chocolate War sends the message that dehumanization occurred by blind obedience to power and authority. A secret society in Trinity is The Vigils. It has the inconceivable influence and power at the school. Archie Costello, the assigner of The Vigils, designs the cruel assignments for the helpless students in order to participate. No one will ever try to go against his ideas and no one wants to be an enemy of The Vigils. The spineless and cowardice for the students leads to Archie manipulating everyone to obey and carry out his wishes. “Tell me why you are here,” (The Chocolate War) Archie asked The Goober in order to show his powerful. When The Goober responded to his questions, he has to answer as “Yes sir” or “respect” the assigner of The Vigils, Archie. The Goober succumbs to the authority and power. He passively accepts and conforms to the assignment.

For the students, the assignment is something inescapable and unable to fight against it. The purpose of The Vigils is to establish anonymity to “minimize each prisoner’s sense of uniqueness and prior identity.” In fact, the students mean nothing in the face of The Vigils’ power (Breakthrough Writer). Similar to the Milgram experiment, the “teachers” followed the order of the experimenters blindly for reinforcing actual electric shocks to the “learners” every time they answer the questions wrongly. They do completely what they are told, neglectful of their humanity and social morality. Like the Stanford experiment, the prisoners are forced to wear smocks that look like dresses to restrain their movement like a “feminine” manner. Then, the “guards” strip the “prisoners for the punishment of their masculinity for the clothes to be naked completely for representing the helplessness and powerlessness of the prisoners, like the students of Trinity. While not as extreme, The Vigils do take the students to their hideout where the students are rendered helpless and in a way are “naked.” The Vigils’ strip the students of their masculinity by the assignments, which are a reminder of who has all the power and who must be obedient. (Breakthrough Writer)

Sadistic dynamics are the process of dehumanization that is taking their own pleasure by building painfully on the others. Brother Leon seeks for the Vigils support in the chocolate sale to cover for his illegally spending of the school money as an embezzler. He also knows that with The Vigils acting on his behalf, his power over the students and the sale is greater. It seems as if Brother Leon actually enjoys watching Archie Traumatize and controls the students. Similarly, Brother Leon taunts and controls the teachers and administrators, as well as the students. He defames Bailey as a cheater. He says, “Why do you find it necessary to cheat?” (The Chocolate War) When Bailey is facing Brother Leon’s questions, he is seeking to help of the class. However, the class is utterly silent; no one is willing to come out and defense of him. Brother Leon humiliates Bailey pleasing his own satisfaction for showing his power. Also, the sadism inside his soul scapegoats an innocent victim to make his subjects prove their loyalty like the chocolate sale. The corrupt and cowardly Leon underscores Archie’s nihilistic belief. He is as evil as Brother Leon.

His own personal sense that he is lacking in humanity also feels a sense of “self-disgust,” especially when he is introducing a new assignment by interrogating a student. When he tells the Goober that the assignment is not anything personal, it is like the depersonalization or dehumanization of the subject performing the assignment. Moreover, The Vigils hold their conference in a windowless room with guards, comparable to a prison cell. The prison cell represents “close confinement” fosters the sadistic dynamics like the Stanford experiment. The guards are severely violating the rules of the experiment and their initial commitment. They beat up the learners who rebel against their orders. The action of their violence is becoming bloody gradually. The dehumanization process encourages people who desire power to become more cruel and ruthless in their imposition of purpose.

Everyone has a different standard of morality. The doubtful moral standards for Brother Leon and Archie are worthy for us to probe into. In The Chocolate War Brother Leon and Archie allow the fight between Emile and Jerry, and continue another fight for boxing after school. It is because of the spite and revenge for punishing Jerry as he refuses the chocolate sale. Brother Leon is eager for power by the huge success of the chocolate sale. However, Jerry’s defiance becomes a significant symbol signs the students can have their own option to choose. Obviously, it obstructs the sale and the success for Brother Leon. Therefore, he selects to hear but pay no attention to the fight. He goes to every expedient to reach his purpose by reneging professional principles of being a teacher. One the other hand, Archie rationalizes his behavior with self-disgust that he plays the role just like everyone else do as populist fallacy.

He does not feel any guilt of his behavior by saying “life is shit,” “everyone is a bastard.” He applies his talent to think about what will hurt a person most like what he is really doing like the assignment he gives to the Goober. In this incident, the Goober becomes less human and more like “Vigil bait.” He suffers his own guilty conscience due to Brother Eugene’s breakdown. The Vigils make the students perform tedious acts that remind the students that they are insignificant, less human and more animal (Breakthrough Writer). Similarly, it happens like treat the prisoners more like animals than humans in the Stanford experiment. The prisoners must obey the strict rules by making them ask permission for the most rudimentary activities. They abuse any prisoner as they want severely like strip the prisoners of their clothes to set up an example for others. The dehumanization develops evil inside the guards gradually. The doubtful human’s morality in the controversial the Stanford experiment is worth to think over.

Tribalism is a sigh of symbiosis that it cannot stand by its own. It always has someone giving order and someone compromising. The Vigils give the assignments to the students, and the students follow blindly. Some of them will never think of resistance or rebellion; some of them will love to enjoy watching the assignment proceed and maintain. Besides, as Brother Leon takes over management of the school, it is his decision to double the quota and the price in the chocolate sale. The students do not complain but accept the deal acquiescently. Their relationship is like “captors and captives” mutual dependent on each other. Moreover, his financial foolhardiness of the project won’t be successful without Archie’s help. Archie applies his intellect scheme for affecting and encouraging the students to work hard for the sale. Without, if the assignment carries without students obey, it is hardly to accomplish.

When I was 16 years old, all my friends were smokers. They always smoked around me, and tried to make me became one of them. At first, I really hate smoking, and I will stop them if they smoked. However, they keep convincing me and told me they won’t be my friends if I did not smoke, so I listened to them. After one month, my mother saw me in the street and I was smoking with them. My mother asked me to quit, but I did not agree. I told my mother: “They are my friends, if I don’t smoke, they won’t be my friends anymore.” My mother said: “If they are your good friends, they won’t let you to smoke. They know the bad effects of smoking, but they still teach you to do that.” After that day, I stopped smoking. Now, I know that if all the people around me are doing one thing but I am not, it makes me become a “special person”. However, I am who I am; I don’t have to change myself by peer pressure to become one of them. 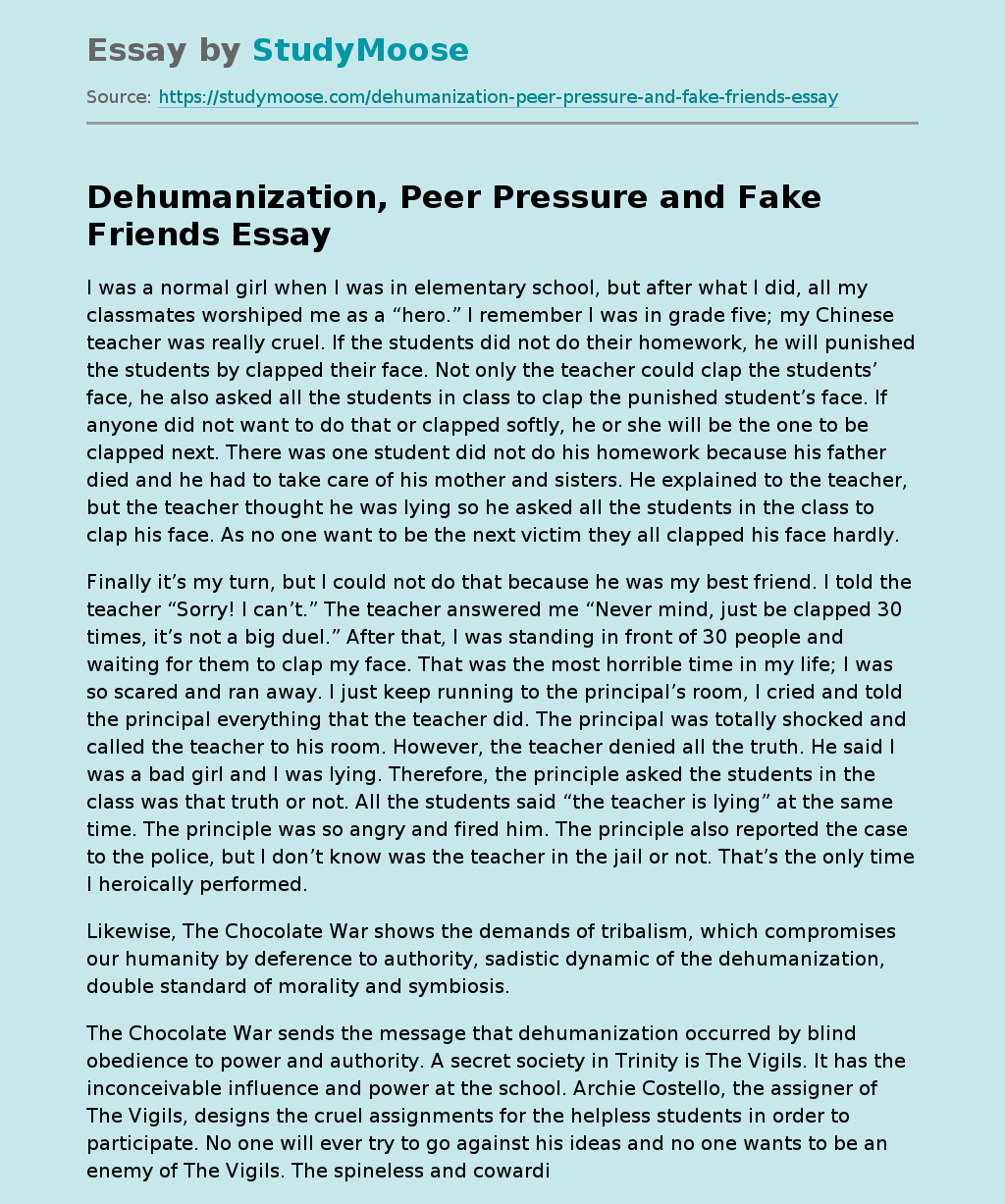