“The possession of power over others is inherently destructive both to the possessor of the power and to those over whom it is exercised.

Don't use plagiarized sources. Get your custom essay on
“ ‘Fire and Ice’ by Robert Frost and ‘The Day They Came For Our House’ by Don Mattera ”
Get custom paper
NEW! smart matching with writer

” George D. HerronThe modern industrialist society, in which we live, has been shaped by people in the possession of power, and the power of passion. The 20th and 21st century’s have illustrated clearly the deadly potential of power, and not just to the possessor of the power but also to those over whom it is exercised. The poem’s ‘Fire and Ice’ and ‘The Day They Came For Our House’ by Robert Frost and Don Mattera respectively, perfectly convey the idea of the destructive nature of power, the poems are both concerned with Mortality of Age. The ideal readers of these poems are people old enough to understand how harsh and cruel this world can be. Furthermore, people who can appreciate the sense of grief portrayed in these poems, as both poets investigate deeply the potentially devastating capability of humans to destroy themselves and others.

‘Fire and Ice’, written by Robert Frost, is a carefully constructed poem, which carries a straightforward message that emotions become destructive when they are too extreme, destructive enough, even, to end the world. ‘Fire and Ice’ holds the theme of Mortality and Age, also the destructive power of passion, Robert Frost also describes humans as complacent, throughout the poem. Rather then telling a story or receiving an insight, Robert Frost simply expresses an opinion. While in the poem ‘The Day They Came For Our House’ Don Mattera is telling a story of a place called Sophiatown.

This poem is a vivid retelling of the experience that Don Mattera went through, and thus is very personal. The main message delivered by this poem is that power can be very destructive, especially if it is used against people with little or no power themselves. Don Mattera illustrates the struggle of the Africans that lived in Sophiatown, when it was being demolished by white people to make a white settlement. The themes of this poem are Mortality and Age and some protest, which come under the main theme of alienation. Also just like Robert Frost he describe humans as being complacent.

In the poem ‘Fire and Ice’, Robert Frost creates a speaker whose conjectures about the world’s ultimate destruction are designed to reveal the deadly potential of human passion. To address his theme, Frost cleverly manipulates the imagery of the title, ‘Fire and Ice’. Frost requires the reader to think first about the destructive powers of fire and ice, and then relate this to desire and hate. In order to understand the poem’s warning about the equally ruinous potential of unbridled emotion. In the lines: ‘Some say the world will end in fire/Some say in ice’ (stanza 1, lines 1-2), Robert Frost shows two different ways that could lead to the World’s ultimate destruction. These lines relate to the theme of Mortality and Age, because there is an inevitability of death.

He then follows on with, ‘From what I’ve tasted of desire/ I hold with those who favour fire’ (stanza 1, lines 3-4), Robert Frost describes the power of fire and its metaphoric companion, desire. In these lines, Frost, has his own opinion of how the world will end, this shows how personal this poem actually is. Robert Frost, thinks that the world will be destroyed from desire and greed. He goes as far as saying that greed itself most probably will end the world. From this we can take that he is writing this as the oppositional discourse, because surely the dominant discourse would deny greed as taking over the world. Without a doubt desire and greed are portrayed intensely in the poem ‘Fire and Ice’ but also in ‘The Day They Came For Our House’.

Don Mattera who wrote the poem ‘The Day They Came For Our House’, had the intention to show how dangerous uncontrolled power can be, it can destroy peoples lives and cause serious pain. Don Mattera, just like Robert Frost is writing this poem as the oppositional discourse. This poem is deeply intertwined with that of a protest theme. Don Mattera protests about the arriving whites coming to demolish Sophiatown. He describes their arrival as, ‘Armed with bulldozers/they came/to do a job/nothing more/just hired killers/’ (stanza 2, lines 1-5). This quote represents how insignificant the Africans are perceived to be, by the white people coming to demolish their town.

Don Mattera explains no emotion in this stanza. He has done this to show that the white people also had no emotion in what they were doing. In his eyes they didn’t care, it was just another job for them. The lines, ‘We gave way/there was nothing we could do/although the bitterness stung in us’ (stanza 3, lines 1-3). Clearly illustrates the African’s lack of power. They can’t do anything; this highlights the destructive nature of power, and relates to the theme of mortality and age. This is portrayed throughout this poem, Don Mattera, explains how it is pointless for them to do anything because they have no power. The whites who demolished Sophiatown gave into ego and greed, and used their power against the black Africans. This is a perfect example of power being destructive to those over whom it is exercised.

Don Mattera’s cultural background has influenced this poem drastically, because he grew up in Sophiatown, which at the time was a vibrant centre of South African culture. His poem is very personal; this makes it easier for the ideal reader to relate to. Fully understanding this poem requires the readers to understand the hardship and pain that the Africans went through. The lines, ‘We stood/Dust clouded our vision/We held back tears’ (Stanza 4, lines 1-3) exemplify’s some of the pain and suffering that the Africans of Sophiatown went through. The reader of this poem would feel sadness toward the Africans of Sophiatown, and most probably anger towards the white people who demolished their town. But unless they have been through something similar, will not be able to imagine the true extent of the emotions that Don Mattera and the other Africans would have experienced.

Similar to ‘The Day They Came For Our House’, Robert Frost’s poem ‘Fire and Ice’ can only be fully understood when the reader can appreciate the grief portrayed in this poem. Although not as personal as Don Mattera’s poem, it is still a depressing poem to read. Robert Frost was born in San Francisco, California. Because he is American his poem varies in the way he has chose to write it, compared to Don Mattera’s poem. In ‘Fire and Ice’, Robert Frost describes a personal apocalypse. He writes about the power of emotions such as desire and hate to destroy the world. Robert Frost would have witnessed greed and hate and heard of wars and all the hate that fills the world while he lived in America.

‘Fire and Ice’, is also a text that has a very sophisticated style. The poem is written primarily in rhymed iambic tetrameter, although three of the nine lines are in iambic dimeter. The use of such rhythmic patterns makes this poem more musical and memorable. Robert Frost also uses alliteration in his poem, such as ‘favour fire’ (stanza 1, line 4), which shows that Robert Frost is privileging the oppositional discourse because he believes the world will end from desire. Furthermore, ‘Some say’ (stanza 1, lines 1&2), is another example of alliteration. Compared to ‘Fire and Ice’, ‘The Day They Came For Our House’ is a poem that is less sophisticated, it is more of a free verse poem.

In a way this emphasises the poet’s case, because it shows the poem has being unbalanced and less structured, which is what Don Mattera would have felt when he was being evicted from Sopiatown. Don Mattera also uses personification in his poem. It is illustrated in the lines, ‘The sun stood still/ in the sullen wintry sky’ Don Mattera has used this to show how Sophiatown was intertwined with the environment. He loved the surroundings of Sophiatown just as much as the people who inhabited it. This makes it a much depressing poem for the readers as it shows his love for Sophiatown, a place that was demolished to make way for a white suburb called Triomf which means triumph in English.

In the poem, ‘The Day They Came For Our House’, the last lines sum up the poem’s themes, but also sum up Robert Frost’s poem ‘Fire and Ice’. The lines, ‘The power of destroying/the pain of being destroyed’ is essential to both poems because it demonstrates the underlying discourse that underpins the text. That is, in our modern industrialist society we are all shaped by power whether it is by people in possession of power or the power of passion.

I chose the poems ‘Fire and Ice’ and ‘The Day They Came For Our House’, because they reflected the themes of 20th and 21st century very well, themes which are Mortality and Age and protest. Also both were wonderfully constructed poems and both poems appeared simple to read through at first glance. However, upon further reflection, they both presented different facets, which made them more complex and elusive. When I examined both poems, I could relate more to ‘Fire and Ice’ compared to ‘The Day They Came For Our House’.

I do not think I was an ideal reader of the latter poem, mostly because the poet was of a completely different cultural background. I could relate to it in some ways, although I felt almost guilty when reading the poem. I felt like I could not understand the full extent of pain and sadness that the Africans of Sophiatown went through. As mentioned above ‘Fire and Ice’ is a poem that I could relate to much easier, because I understood Robert Frost’s opinion of how desire, greed and hate would be the downfall of mankind. Furthermore it was not as personal compared to Don Mattera’s poem.

‘Fire and Ice’ and ‘The Day They Came For Our House’ by Robert Frost and Don Mattera respectively, through their poems, show the notion of Mortality and Age, protest and essentially Alienation. Although both the poems express the same themes, the authors have chosen different ways to illustrate their feeling towards the subject. Robert Frost uses ‘Fire and Ice’ to simply express and opinion rather than tell a story, which is how Don Mattera illustrates his ideas. His poem is a vivid retelling of the experience that he went through. Both poets position the reader to identify with their ideas. They illustrate the fact that “The possession of power over others is inherently destructive both to the possessor of the power and to those over whom it is exercised” (George D. Herron).

‘The day they came for our house’, 1999, Don Mattera, http://www.saep.org/Sinethemba/Poetry/studied/Mattera/Mattera.htm, viewed 21st May 2008.

'Fire and Ice' by Robert Frost and 'The Day They Came For Our House' by Don Mattera. (2016, Aug 01). Retrieved from https://studymoose.com/fire-and-ice-by-robert-frost-and-the-day-they-came-for-our-house-by-don-mattera-essay 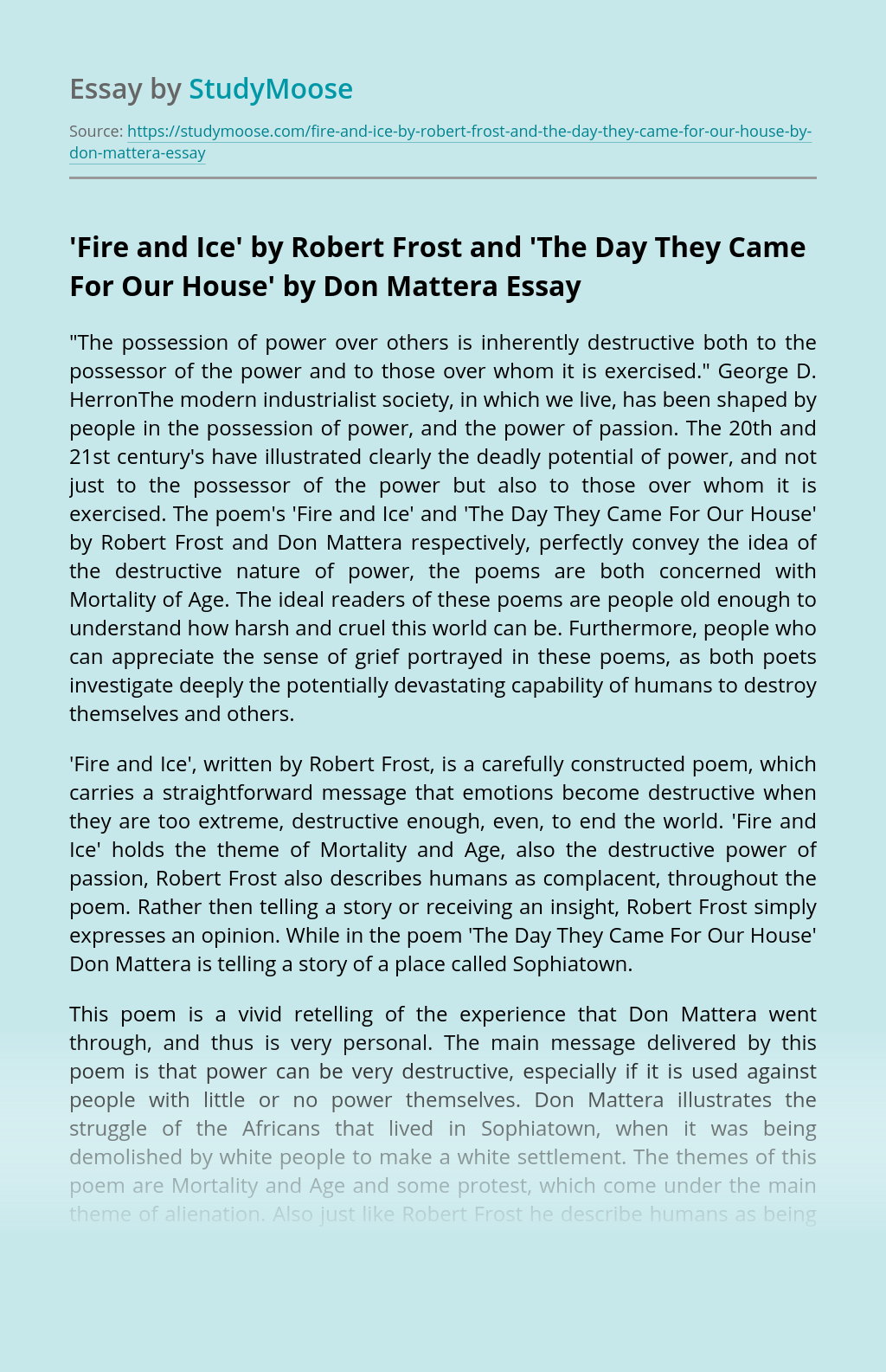