A Report and Analysis of "Don't Fire Them-Fire Them Up"

In many cases, the principles that lead to success in the business world translate very well to other disciplines, such as military leadership and operations. An excellent example of such principles can be found in Frank Pacetta’s “Don’t Fire Them, Fire Them Up”, a work that is considered by many to be a pivotal piece of literature in the field of business management, more specifically sales management, as well as any other endeavor which requires the ability to motivate, lead and encourage others, in addition to one’s self.

Don't use plagiarized sources. Get your custom essay on
“ A Report and Analysis of “Don’t Fire Them-Fire Them Up” ”
Get custom paper
NEW! smart matching with writer

This paper will present an overview and discussion of Pacetta’s book; moreover, this paper will also discuss how the principles put forth in “Don’t Fire Them, Fire Them Up” have relevance in military settings as well. Upon conclusion of this research, the reader will not only better understand the mindset of Frank Pacetta, but will also hopefully find motivation to read his work for themselves and utilize his principles for their own enrichment and to guide and mentor those to look to them for leadership and support.

An Overview of the Book

Before a meaningful discussion of the key elements of Frank Pacetta’s book can take place, it is important to take a closer look at the book as a whole. In “Don’t Fire Them, Fire Them Up”, Frank Pacetta uses his own personal experiences as a sales manager for Xerox Corporation as the template for the story he is telling and the concepts he is sharing with the reader.

Having found himself with the ironic responsibility of improving the worst performing sales region for one of the world’s most profitable corporations, Pacetta realized early on that his work was certainly cut out for him.

To his credit, he also came to an early realization that the first instinct to fire the entire sales force was not the appropriate course of action; rather, motivation was needed for the salespeople and support staff, as they were not deliberately poor performers or underachievers, but in Pacetta’s own words “the plane was on autopilot and falling fast” (Pacetta, 1994), meaning that the sales department overall was failing tremendously, but apathy ruled the day, whether due to fear of inappropriate actions or perhaps even a self fulfilling fatalism.

Whatever the case, Pacetta chose to lead by example, which is clearly illustrated by his concepts of The Power of Personal Example and Being Who You Say You Are (Pacetta, 1994). In other words, he practiced what he preached, and in the final result of his actions, the failing department he entered was transformed into an effective team environment that became on of Xerox’s most profitable territories.

While Pacetta started the transformation by introspection, he did not achieve this success single handedly; rather, he found the best in each of his team members and honed it into what was needed for the well being of the entire operation. Perhaps most importantly, Pacetta reached the realization that people are in fact the organization’s best asset. Perhaps the author himself said it best with this statement:” What folks need desperately are people who believe in them, and are committed to their success, and people who will do everything possible to empower them to fulfill and live their dreams” (Pacetta, 1994).

The Author’s Maverick Attitude The subtitle of this book, so to speak, is “A Maverick’s Guide to Motivate Yourself and Your Team”, which in retrospect embodies the leadership by example and individual motivation that Pacetta used in his own experiences, which ultimately formed the backbone of his book. The “Maverick Attitude”, so to speak, is worthy of note and discussion because of the important contributions it made to the book and the success story around which the plot was developed.

Someone once said that desperate times call for desperate measures; faced with a quickly dying sales department in what could be a promising and profitable territory with the proper cultivation, Pacetta was not afraid to step out of the conventional comfort zone for the sake of better results in a sort of tough-love situation. One of Pacetta’s key philosophies is to tell his personnel where they are headed, for better or for worse.

Through a creative combination of compassion and candor, he was able to tell his staff that while there were things that they had done quite well, there was a problem that held the potential to lead to the destruction of the department from the inside out. In this way, Pacetta was able to project the understanding that some possibly painful actions needed to be taken for a better end result, but each individual properly understood that they were not being abandoned, and moreover, were being retained and mentored because of their past contributions and future potential.

Application of Pacetta’s Techniques in a Military Environment Moving from a topical discussion of “Don’t Fire Them, Fire Them Up” to actually putting its principles into practice, it is valuable to consider the application of Pacetta’s techniques to a military environment. When the book’s concepts are applied to the military environment, there are several very important philosophies that would serve military leaders and their personnel quite well.

At the risk of stating the obvious, perhaps the most apparent and valuable of these is the afore mentioned adage that the personnel of a leader are perhaps his or her best asset. Even the greatest of leaders and motivators would be set up to fail without reliable and motivated people within their command who, properly led, would make endless contributions to the welfare and effectiveness of the unit. As the old saying goes, the chain in final analysis is only as strong as its weakest link. Leadership by example is also worthy of extraction from Pacetta’s book and application into military management.

Such attributes as performance under pressure, courage, perseverance and integrity are best learned by seeing them in practice, and as the most visible member of a military unit, the leader is looked to as a pacesetter for subordinates. Without strong examples of leadership, even the best laid plans may be doomed to fail. Lastly, a concept which may stretch the boundaries of military order but is noteworthy nonetheless is that of not being afraid to be a trendsetter in leadership, a quality which Pacetta calls being a maverick (Pacetta, 1994).

This does not mean insubordination or dereliction of duty, but rather the unique ability to use one’s own initiative to achieve goals and objectives while still remaining within the boundaries of regulations and acceptable practices. While this may sound like a contradiction in terms, it has been proven to be effective in the world of business, and should neatly lend itself to military matters. Conclusion In his book, Frank Pacetta not only shares a classic, real-life tale of triumph over adversity, but also a story of the value of the individual, the team, and the leadership of both.

Through actual anecdotes and intelligent analysis, “Don’t Fire Them, Fire Them Up” makes valuable points for the executive and Admiral alike. In closing, the researcher hopes that the spirit of Pacetta’s teachings carries through in this paper as well; further, it is hoped that the readers of this paper will take the time to read and practice what can be found within the pages of Pacetta’s classic work of business literature. References Pacetta, Frank (1994). Don’t Fire Them, Fire Them Up. New York: Simon Schuster.

A Report and Analysis of "Don't Fire Them-Fire Them Up". (2016, Aug 27). Retrieved from https://studymoose.com/a-report-and-analysis-of-dont-fire-them-fire-them-up-essay 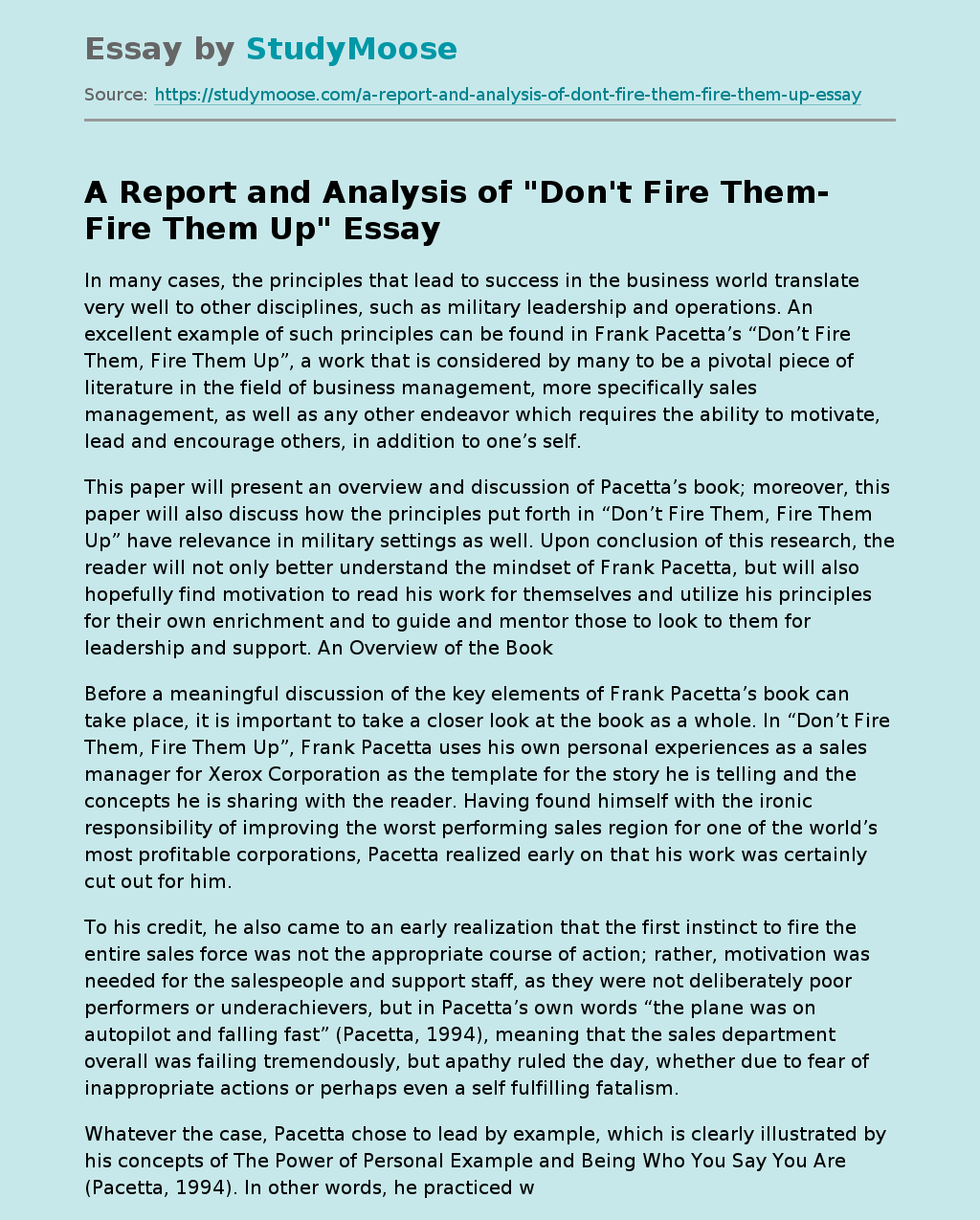