Christopher Columbus is one of the best-known of all explorers. He is famous for his voyage in 1492, when he “discovered” America while he was looking for a way to sail to Asia.

Columbus was probably born in Genoa, Italy, around 1451. His real name was Christoforo Columbo. His wife, a Portuguese women who he married around 1480, was Felipa Perestrello e Moniz. They had one son named Diego.

He made several voyages to the New World, which he thought was Asia. His first voyage took place in 1492.

Don't use plagiarized sources. Get your custom essay on
“ Christopher Columbus and Ferdinand Magellan ”
Get custom paper
NEW! smart matching with writer

He led an expedition of three ships: the Nina, the Pinta, and the Santa Maria. On October 12, 1492, the expedition landed on a small island in the Caribbean Sea. Columbus was sure that he was close to Asia.

His second voyage was from 1493 to 1496. This time, he took 17 ships and 1200 sailors and colonists looking for riches in the New World and a quick route to Asia. On this trip, he explored Cuba and discovered the islands of Jamaica, Guadeloupe and Puerto Rico.

He was not the first European to find North America. The Vikings had come to northern North America hundreds of years earlier. However, Columbus is important because his explorations made Europeans much more aware of the New World and helped to encourage more exploration of North and South America in the 1500s.

Ferdinand Magellan and his discovery of the Philippines

FERNÃO Magalhaes was born in Portugal around 1480, the son of the mayor of his native town.

His interest in the nautical sciences started when he studied in the Court of Portugal. These studies filled him at an early age with enthusiasm for the great voyages of discovery which were being made at that period.

In 1505, he took part in the expedition of Francisco d’Almeida to establish the Portuguese viceroyalty in India. In 1511 he was in the Portuguese conquest of Malacca and he subsequently took part in the Portuguese expedition to Morocco. After getting entangled in a personal disagreement with his commander in chief and falling from the grace of the King after a report from Almedia, he devoted himself to his studies and projects, particularly reports of the recently discovered Moluccas sent by a friend, Serrão. Serrão had so greatly exaggerated the distance of the Moluccas to the east of Malacca that the islands appeared to lie within the half of the world granted by the Pope to Spain. Magalhaes resolved to seek the Moluccas by sailing to the west around South America.

As he could not obtain support from his country, he renounced his Portuguese nationality, offered his services to Spain, and took the name Ferdinand Magellan. King Charles appointed him commander of a fleet of five vessels, with provisions for 234 persons for two years. Magellan commanded the chief ship, the Trinidad; Juan de Cartagena, the San Antonio; Gaspar de Quesada, the Concepcion; Luis de Mendoza, the Victoria; and Juan Serrano, the Santiago. The expedition also included the chronicler Antonio Pigafetta.

The fleet sailed September 20, 1519, from San Lucar de Barameda, enduring the treacherous seas, winter, and a mutiny that saw the execution of De Cartagena and De Mendoza. More than a year after they set sail, they reached the Cape Virgenes that led to the entrance to the straits which today bear his name, the Magellan Straits. Suffering from the desertion of one of his ships, the San Antonio, he entered the straits and after three weeks reached the open sea on the other side, which he named Mar Pacifico. He continued to sail west and on March 15, 1521, he reached the Archipelago of San Lazaro.

He was received in an amiable manner by the chief of the island of Cebu, Rajah Humabon, who was baptized along with several hundred of his followers. He then proceeded to subdue the neighboring island of Mactan but was killed in an encounter with the group of Lapu-lapu. His demise prevented Ferdinand Magellan from reaching his goal – the Moluccas – but his voyage accomplished the feat of circumnavigating the world, and that gave the first positive proof that the earth was round. What remained of his men – 18 of the more than 230 who began the journey with him – sailed back to Spain. Ferdinand Magellan and the Spaniards thus introduced the people of the Philippines to Christianity and opened it to the outside world. 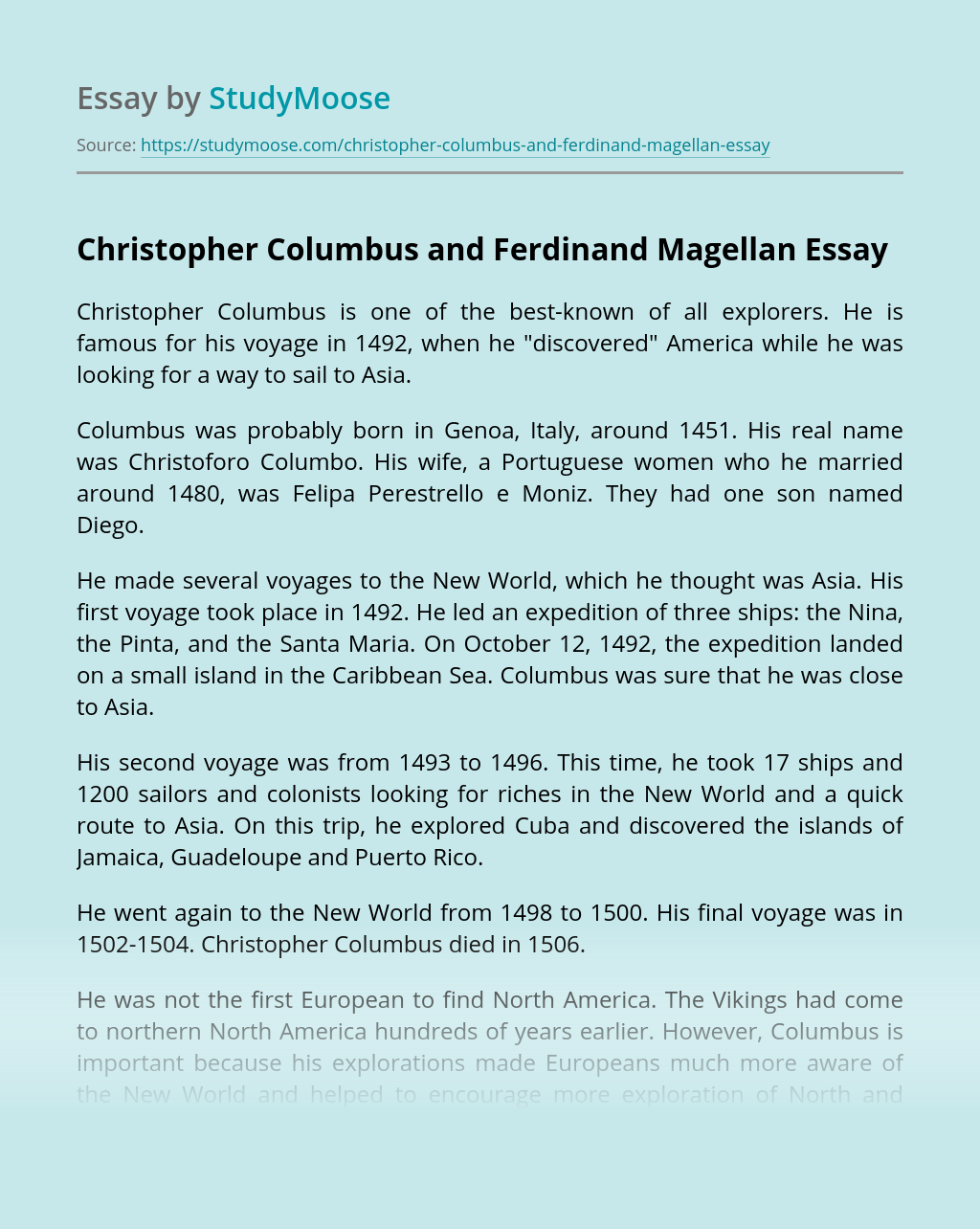