Ferdinand de Saussure and Onject of Study: a Brief Illustration

Ferdinand de Saussure was a Swiss linguist who laid the foundation on the ideas of structure in the study of language. His Book Course in General Linguistics that was published in 1916 has detailed all that he claimed to be his views. In his book Saussure shows us a clear reaction against many of the ideas raised and he emphasizes the importance of seeing language as a living phenomenon as against the historical view, of studying speech, of analysing the underlying system of a language in order to demonstrate an integral structure, and of placing language firmly in the social milieu.

Don't use plagiarized sources. Get your custom essay on
“ Ferdinand de Saussure and Onject of Study: a Brief Illustration ”
Get custom paper
NEW! smart matching with writer

Saussure’s theoretical ideas are a must read and his influence has been unparalleled in European Linguistics since and, it had a major formative role to play in the shaping of linguistic thoughts in Europe. Saussure’s Object of Study theorised his structuralist view of language and shows how his essay forms the basis of structuralist theory. Saussure equipped his essay with a theory and a method of linguistic analysis from the structuralist point of view.

Saussure envisaged langage to be composed of two aspects- the language system and the act of speaking.

Langage is that faculty of human speech that is present in all human being due to heredity, and it requires the correct environmental stimuli for proper development. It is our facility to talk to each other which Saussure has infused in his work. Saussure also argues strongly that the characteristics of the system of language are really present in the brain, and are not simply abstractions.

It is something which the individual speaker can make use of but cannot affect by itself. It is a corporate and social phenomenon.

Saussure in the very beginning of the essay claims that the linguistic study cannot be judged from the study of other sciences. Linguistic study is completely a different process. In linguistic a particular object of study may have several series of different things- the sound, the idea, the derivation- to light up after study. Hence Saussure says that the object of study cannot be at the first to the view point. It is the viewpoint that creates the object of study. The linguistic phenomena can be always found in bi-complimentary facets which are dependent on one another.

That is, the perception of the ear of the articulated syllables as the auditory impressions cannot be the sounds in questions that come to be existed with the vocal organs. Speech sound is no equal to language and they do not exist independently and are mere instruments of thoughts whereas, language is completely an individual aspect. Saussure emphasis on these two distinctions comes at this point of his analysis. The language system as Saussure admits should be studied independently.

He cites the example of Dead language that even though it is no longer to be spoken, however, we can acquaint to its linguistic structures. The language is incongruous and its systems are of similar nature. The language is a structured system and it differs from speech. Saussure has cited a example of a man who has lost his power of speech can also grasp the language system through vocal signs by which he can understand. Saussure in his essay discusses the linguistic structures as only to be a part of language even though it is an integral part of it.

The structure of a language is both the social product and the body of necessary conventions adopted by society to enable members of society to use their language faculty. It comprises in various domains and it is purely physical, psychological and physiological. It is for the individual and for the society. The language faculty of the both rest upon the structure of the language and there cannot be a proper classification for that as such language has no proper distinctions.

The linguistic structures are that faculty in the study of language by which the articulating words, natural or not, are put in use only by means of linguistic instruments that are created and provided by society. The language itself is a structured system and a self contained whole and principle of classification. Saussure in his essay mentions the role of speech circuits of how speeches are exchanged from one individual to another. He gave a proper illustration of it with a proper diagram. This he calls purely a physical process.

In order to understand this tract one must leave the individual act, which is merely language in its young stage, and he proceeds to consider it a social phenomenon. If done so all individuals will linguistically link among themselves and all individuals will reproduce whether it may or may not be that exact but will be almost the same signs related to the same concept. Saussure says that the language cannot be the function of the speaker but it is a passively registered product of the individual whereas, speech is the act of the will and of intelligence of the individual.

In his essay, Saussure also speaks about the evolution of language from times. There are some words which are rarely spoken in our daily contemporary word and usage of such words in our day to day life is kind of absurdity. So Saussure argues that language and linguistics goes on evolution from time to time. It is an institution of the present and of the past at any given time. Saussure also notes on the sciences that claims to language as falling under their domain. But Saussure says that their methods are different and are not as it were needed.

The contribution of Saussure in the concept of language system is the main theoretical contribution and many linguists feel that it was this facet of his thought which had the most profound influence on subsequent scholarship. His view of a language as a system of mutually defining entities is a conception which underlay his works to philology. It is fundamental to his account to his structure in language. Any sentence, for Saussure, is a sequence of signs, and each signs contributes something to the meaning of the whole, and each contrasting with all other signs in the language.

The sign, for Saussure is the basic element of a language. A sequence of a syntagmatic relationship- which is a linear relationship between the signs are present in the sentence. The sign is the basic unit of communication and it is a mental construct. Saussure accepted that there must be two sides of meaning that posits a natural relationship between words and things. His labels for the two sides were signifier and signified, one which the thing which signifies and the other the thing that is signified. It can also be taken as the concept and the acoustic image. The signified is thus always omething of an interpretation that is added to the signifier. He calls this relationship a linguistic sign.

This linguistic signs are not abstractions, although they are essentially psychological. Linguistic signs are, so to speak, tangible and writing can fix them in conventional images, whereas it would be impossible to capture the acts of speech in all their details. When we say signified, this do not exist in sensible form, it is a thought and creation of mental image that the signifier has signified. Saussure’s main concern is linguistic sign does not link a name and a thing; instead it links a concept and an acoustic image.

That is, language is more than just a list of terms that correspond to things. An acoustic image is the mental image of a name that allows a language-user to say the name. However, a linguistic sign links signifier and signified. A signifier is the sound we say when we say an object, and the signified is the concept of that said object. The said object is the sign. In Saussure’s theory of linguistics, the signifier is the sound and the signified is the thought. The linguistic sign is neither conceptual nor phonic, neither thought nor sound.

Rather, it is the whole of the link that unites sound and idea, signifier and signified. The properties of the sign are by nature abstract, and are not concrete. He says that the linguistic principles operate on two principles. The first principle is that the linguistic sign is arbitrary as there is no interior link between the concept and the acoustic image. The second is that the signifier being auditory in nature unfolds in time only. When the signifier and the signified are joined together they produce a sign which is of positive order, and concrete rather than abstract.

The idea of structuralist theory has achieved the status largely on the account of Saussure Object of Study which made it the major linguistic theme of the later years after his death. The linguists were also much influenced by the notions of Saussure, although less directly. The essay forms the basis of a concept of language as a vast network of structures and systems was emphasised on the syntagmatic relationships of the Saussurean emphasis in structures which was taken as the keynote of a number of theories of language and which underlies many other linguistic approaches to language.

The central tenet of structuralism is that the phenomena of human life, whether language or media, are not intelligible except through their network of relationships, making the sign and the system (or structure) in which the sign is embedded primary concepts. As such, a sign — for instance, a word — gets its meaning only in relation to or in contrast with other signs in a system of signs. Thus we can analyse that Saussure’s Object of Study has its basis of the structuralism theory. 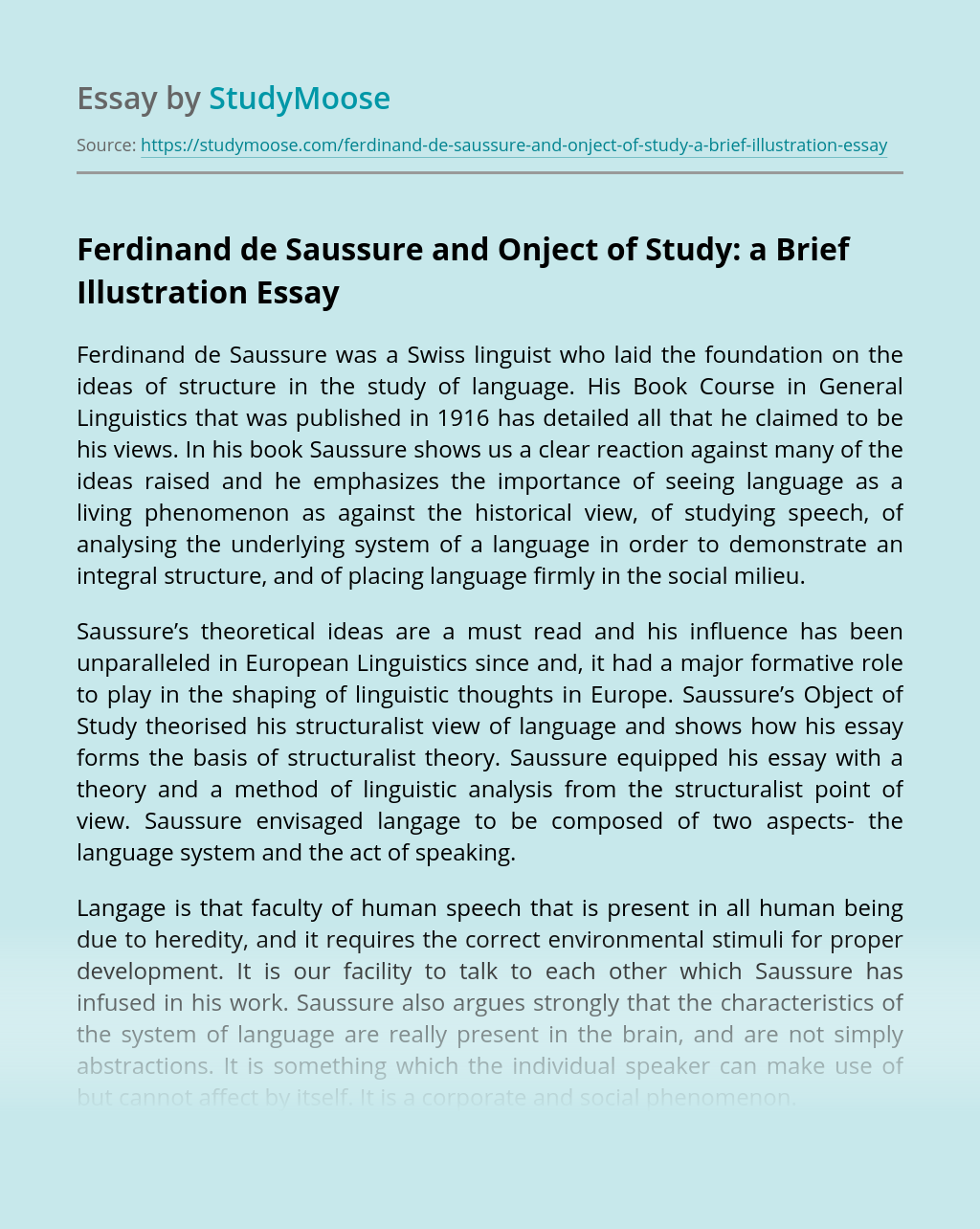