In 1492, Christopher Columbus, discovered America. More than 500 years later Columbus Day is a national holiday. Statues are up, even in Pueblo, and thanks are given for what he has done for us. We learn about him in grade school and we are told of his brave adventures. However twenty years later in my first history class another picture is being painted of Columbus; not from my History book, but from my teacher. I thought it was interesting to be learning these conflicting views of him and researched the facts.

Don't use plagiarized sources. Get your custom essay on
“ Christopher Columbus; Hero or Villain ”
Get custom paper
NEW! smart matching with writer

We now know that Christopher Columbus did not discover America this is indisputable. What is disputable is what he truly did when he came over to America. To get a better understanding of what was going on with Columbus in late 1400s I will give some back story.

During those times, commercial ventures were being offered and Columbus had previous experience being on ships so he saw the opportunity to exploit his beliefs. Christopher believed that the world was round and if he sailed east he could make it to the Indies. What he did not know was how long it would take him to get there. He was alone with his first son, Diego, and set out to get funding for his voyages.

He went to Queen Isabella and King Fernando and asked if they would fund him. They said they would need to look into it further. Priests and scholars studied and researched his idea for six years while Columbus and his son followed them to wherever they may travel. Columbus was finally told no his idea was foolish and the earth was too big to sail that way. He continued with his beliefs and tried to change their mind. He presented his idea two more times to no avail. As Carol Gallagher describes in her Biography of Columbus “he became a joke at court”. (Gallagher)

At last, after the third attempt and being rejected, Columbus rode away on his mule. Only to be caught up with by a messenger of Queen Isabella, he was told that they had changed their mind and would accept the proposal. They granted him three ships with 90 men. Finally Christopher could right his name and prove that he was not a joke. With years of being mocked, and laughed at Columbus had a lot to live up to. Christopher was now feeling righteous in his quest and asked that he be named ‘Admiral of the Ocean Sea’ and a tenth of all riches found to be his. The Queen and King agreed.

The voyage had taken thirty-three days to reach land on America. Which Christopher believed it to be the Indies. Christopher writes in his journals his first impression of the natives; he writes that they are naked and young with shapely bodies. The Admiral said that they would be good servants and could learn their language quickly. Columbus named every piece of land they came upon and put up big flags. He claimed it all for Spain; never mind the thousands of people already living there, it was now Spain’s. They took six of the native’s captive to bring home to the Queen. Christopher had seen some men wearing gold rings on their legs and arms and took them to show him where the rest of the gold was.

However the natives could not show them directly and Columbus believed they were lying. Columbus wrote to the King and Queen and told them “There are many spices and great mines of gold and of other metals.”(Gallagher), this was in fact a lie. Columbus did not find mines of gold, he did receive a gold belt and felt the Natives where lying to him about the rest of the gold. He decided to return home and get more supplies and men. When he returned to Spain the King and Queen where pleased and wanted more of the riches of the land.

I think that the rest of Columbus endeavors to the New World are fueled by greed and an ignorant notion that God gave him this right. When he returned to America, which he thought was the Indies, he returned with 1,200 men and seventeen ships. Gallagher writes in her Biography “He was given authority to rule. The ships carried soldiers to conquer the Indians, priests to convert them to Christianity, farmers, guard dogs, and farm animals”(Gallagher), he meaning Columbus. So he now intends to go back to America and take what he wants. However he could not find gold mines or riches. He built a fort in a mosquito infested area and hundreds of his men got sick and died from Malaria. The Natives met them with great resistance and also died by the hundreds from small pox and cruel captors. In 1502, which is ten years after Columbus’s first discovery of America, Spain adopted and made official a policy that Columbus had created, encomienda.

What this system meant was an Indian village, all people of 14 years or older could be safe for a period of 3 months with a token. At the end of the 3 months they had to pay with enough gold to satisfy the tribute. If they did not pay them, the natives would get their hands cut off or worse be murdered. The Wikipedia describes this as follows; “Encomienda was a legal system that was employed mainly by the Spanish crown during the Spanish colonization of the Americas to regulate Native American labor and autonomy”. (Wikipedia) The encomienda system was horrible. It was created by Columbus, in order to get gold. However the system was kept by other conquistadors all over America in the early 1500’s. This is a quote from Van Serima “They are not, as most of us would like to believe, voyages of discovery. But they are of great significance since they changed the character of the whole world, both the old world and the new.” (Serima 75) What Serima is saying is that Columbus did not discover a New World but a new way of getting what you want when you have more power.

There is a big issue of race and differences being ignored by the conquistadors and Spain. So much life and tradition tossed away for selfish purpose, and was done in the name of God. The Encomienda system was not the worst of it; they sold girls as young as 9 to 10 for sex slaves. Here is a piece he wrote in his journal on the subject “A hundred castellanoes are as easily obtained for a woman as for a farm, and it is very general and there are plenty of dealers who go about looking for girls; those from nine to ten are now in demand”.(Kasum) Columbus had set out to discover the Indies, which was fueled by his love for Marco Polo and his stories of adventures. Instead he discovered an old world and made it his own while killing off everything in his wake. Whether or not Columbus was holding a smoking gun, he definitely had un-locked the gate for others to follow in his self fulfilling prophecy.

Armitage, D states that “Columbus himself was not always asked to carry the can for the ill-effects of the encounter between the Old World and the New, but there have always been those who have used reflections upon 1492 for their own ends.”(Armitage) this is true everyday in America, and even more so now. Even in our school system, if you are one sixteenth Native American you get some special grant. This is kind of Bizarre to me, Native Americans have not been enslaved for at least a century and have every right we do in America, if not more. This proves that when Columbus and the Conquistadors came things where so bad for the Natives they still need special treatment. Whether or not Columbus is to blame for the way things are for Natives today I do not know, however I do know that the way things where in the early 1500’s Columbus could be blamed for. It was a new world for Columbus and he treated his ‘discovery’ with such disdain, that other followers took his lead. Great leaders are people like Edwin Hubble or Martin Luther King.

People who have ideas that make us a greater nation, not people who find a new land and kill everyone in it in order to impress the Queen and King. An article I read that was written by two non-ethusastic followers of Columbus believe that Columbus day should not be a day we celebrate at all “That infamous day should certainly not be celebrated by anyone, especially by local, state, and national governments. Let us not fall into the trap of letting the discussions around this travesty of a holiday revolve around the specific number of people killed.”(Tinker) When I reflect back on everything I have learned in history and even Christopher Columbus, it points to war or some major oppression for every turning point. In my opinion Christopher Columbus was a man of his times who often got things wrong; his morals went sour in the face of the King and the Queen but he led the way for his people into a new world. In his own mind he died a failure, and is later dying a failure in the hearts of America. 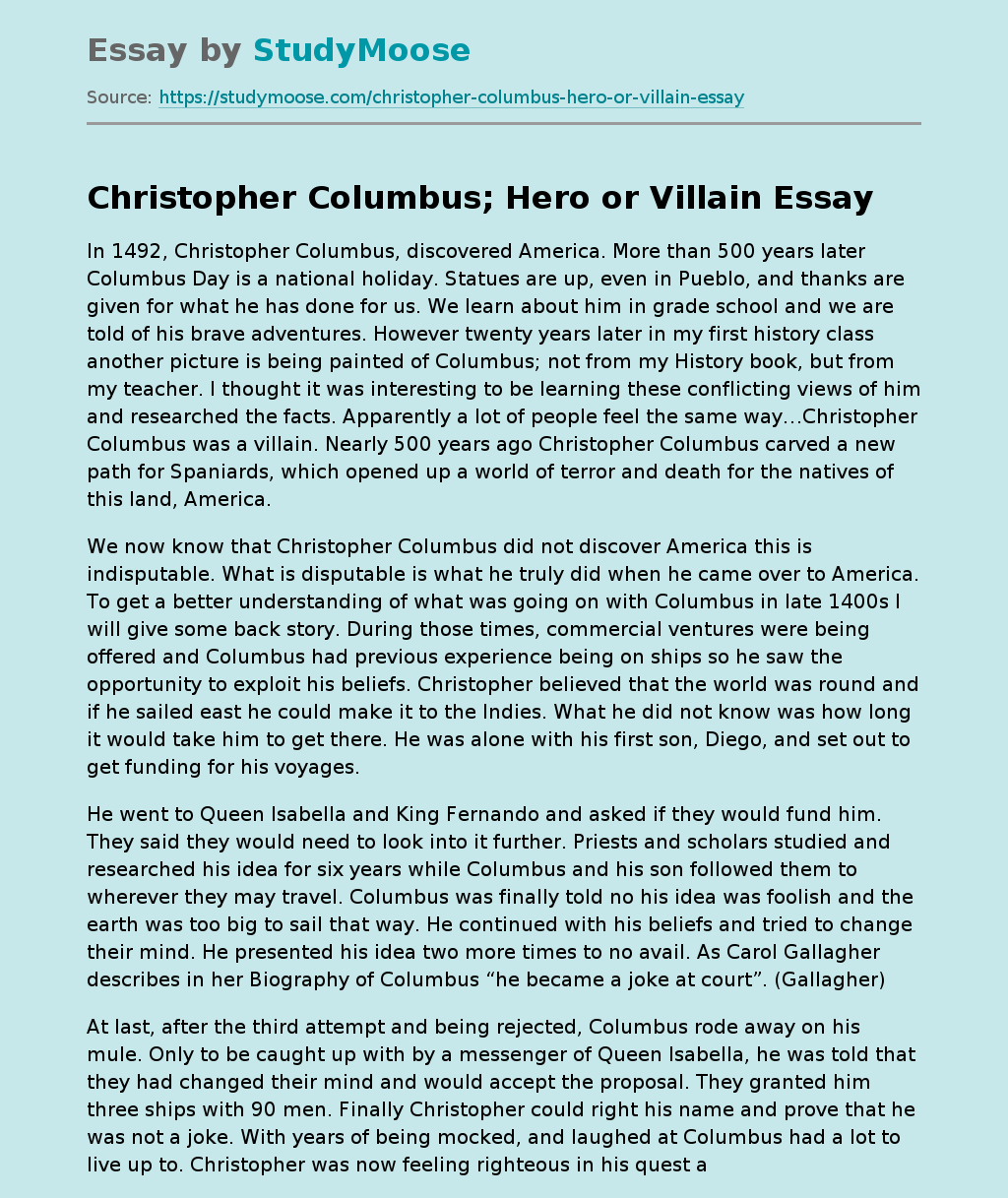