A Character of Ophelia

Hamlet: “Nothing” Shakespeare uses questions to show Ophelia’s lack of sexual knowledge, this makes it seem like Ophelia is very nai?? ve. I believe that this shows a lack of sexual knowledge and understanding because someone who is sexually experienced would have of been a lot more coy when responding to such sexual innuendo, certainly not responding with questions. This shows Ophelia’s honest and pure, unblemished character to the audience.

Don't use plagiarized sources. Get your custom essay on
“ A Character of Ophelia ”
Get custom paper
NEW! smart matching with writer

She is subjected to personal insults and sexual-innuendo but still she remains honest. This is apparent tot the reader that Ophelia’s nai?? ve character is being used by Shakespeare to set her n the play depression and madness.

I believe that this portrays to the audience Ophelia’s pure and untainted character, as the big shock of finally discovering the corrupt world around her when her father is killed.

This highlights her nai?? ve character because someone who was more aware or “streetwise” would have noticed all the hypocrisy and corrupt dealings occurring and this wouldn’t have been reduced to a deranged, nervous wreck, bemused by the world around her.

Madness leads to a contrast in character and Shakespeare uses this to his advantage by completely changing Ophelia’s Character when she had broken down, this is used to great effect to highlight her real character previously.

“Young men will do’t if thy come to’t- By cock, they are to blame” This would leave the audience incredulous and bemused by what Ophelia has said. Shakespeare uses rhyme, detailed slightly annoyed and blunt language to shock the audience. This is used in direct contrast to the passive, inert language used before.

The new open character of Ophelia highlights to the audience her very innocent and untainted character as that was half the problem previously. This depression later leads to Ophelia’s demise and eventual death by falling from a window to her end. I believe that if Shakespeare had meant Ophelia to be the disrespectful woman who many critics portray her to be then he would have created her to be very obviously so. As in his other plays Shakespeare has created women to be purely distinctive in character. Juliet was shown to be absolutely in besotted and devoted to Romeo and Lady Macbeth was portrayed to be absolutely power hungry.

If Shakespeare followed the same pattern for Ophelia then if she was supposed to be a disrespectful young woman then he would have made this absolutely certain to the audience, which he hasn’t done. Also the period of the play meant that Ophelia would have been the honest virginal character Shakespeare portrays to the audience. Women of her social standing and class would have meant that he would have to play the untainted and person created by Hamlet because that is what would have been expected by those around royalty.

I believe that Ophelia has an Honest, passive, inert and untainted character who is virginal. Shakespeare uses passive calm and un-abrasive language to show to the audience Ophelia’s innocence. This is used to create an un-responsive character to the sexual-innuendo and personal insults directed to her. I can see why some critics have interpreted Ophelia’s innocent and nai?? ve character to be coyness, but I believe this to be untrue. This can be shown by her interaction with those around her.

When Hamlet subjects her to sexual-innuendo she replies unknowingly and quite honestly which shows her to be virginal. Shakespeare uses Ophelia as the person who is dramatically effected by the events in the play, she is used as the love interest to Hamlet, daughter of the kings corrupt councillor and an innocent bystander to the volatile environment around her. I believe that Shakespeare uses her to link many of the complex themes surrounding her and to show the effects that such dealings can have on people.

A Character of Ophelia. (2020, Jun 02). Retrieved from https://studymoose.com/a-character-of-ophelia-essay 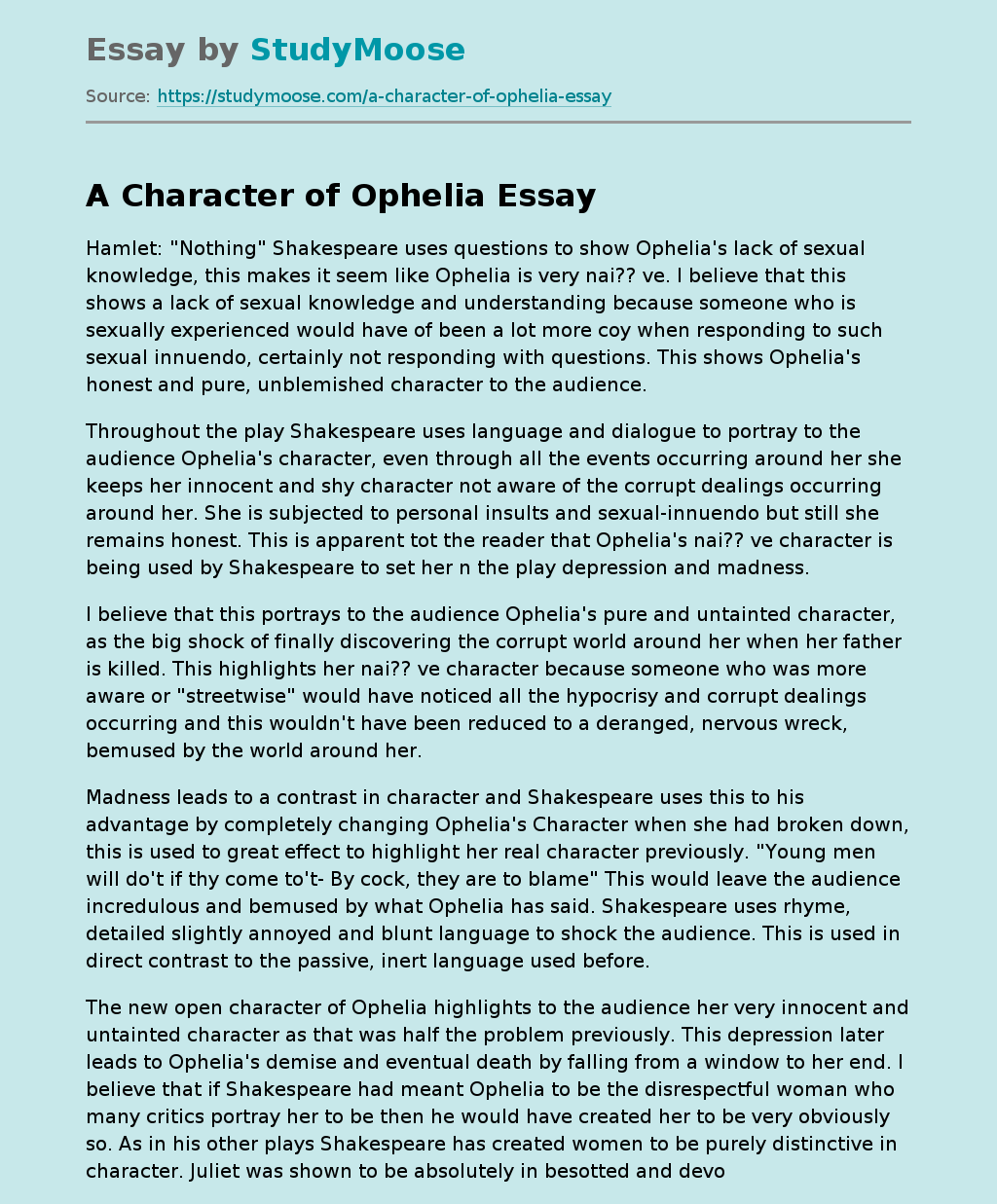