Hamlet Theme of Appearance vs. Reality

Shakespeare examines the theme of appearance and reality in his book-Hamlet. The dilemma of what is “real” is established at the very beginning of the play. Hamlet doesn’t know what to believe and devises a plan to find out. The old king Hamlet appears to be bitten by a snake, but in reality he was poisoned, the ghost appears as an apparition, but it’s actually real, and the play-with-in-a-play strongly depicts the theme of appearance vs. reality. The dead King appears to have been bitten by a snake.

Turn in your highest-quality paper
Get a qualified writer to help you with
“ Hamlet Theme of Appearance vs. Reality ”
Get high-quality paper
NEW! AI matching with writer

In reality, he has been poisoned.

Everyone believes that the king died from snakebite, but once Hamlet knows the truth he is unsettled by the revelation. When Hamlet’s dead father directs his son to, “Avenge him of his foul and most unnatural murder” (1. 5. 25), Hamlet’s response shows determination to act and a curiosity to know all the facts surrounding the murder: (1. 5. 29-31) “Haste me to know’t, that I, with wings as swift, as meditation or the thoughts of love may sweep to my revenge.

A person who wants to take revenge rarely has “thoughts of love” but only concentrates upon thoughts of revenge, but Hamlet’s thirst for revenge is immediate and deep. Shakespeare also develops the theme of appearance vs. reality when Hamlet resents his mother’s insinuation that he is putting on a show of being grief-stricken. Strangely, he is the only one in the family who is truly mourning his father’s death.

He replies that all outwardly signs of his grief, such as his black cloak of mourning, his tears, and his sighs, are mere appearances, not even close to the depth of the real grief in his heart (1. 2.

70-80). This theme of appearance vs. reality will play an important part in the entire play. Another example of appearance vs. reality is the Ghost that appears as an apparition from the depths of hell, when actually he is the medium of reality, revealing the facts to Hamlet. The ghost tells Hamlet that his father was murdered, “Revenge his foul and most unnatural murder” (1. 5. 25). Since Hamlet doubts the sincerity of the Ghost’s revelation, he decides to put on the appearance of being mad to see if this is true, “I’ll wipe away all trivial records ? and they commandment all alone shall live” (1. 5. 99-102).

Hamlet’s decision to simulate madness as a means of enacting his revenge is important. The news that Hamlet received about his father and his mother could drive anyone insane. As a result, the line between appearance and reality becomes notably distorted as the play progresses. Guildernstern says in Act 3 lines7-9, “But with a crafty madness keeps aloof when we would bring him on to some confession of this true state. ” At times it also seems that Hamlet’s appearance of madness has become a reality, (3. 1. 201-203) “You should not have believed me, for virtue cannot so inoculate our old stock but we shall relish of it.

I loved you not. ” Hamlet loved Ophelia so this is definitely not true, but during the course of the play, his madness seems so genuine that one wonders if he is acting. The most obvious symbol of ? appearance vs. reality’ is the play-within-a-play. The actors appear onstage and act out the events that actually happened in reality. Hamlet has carefully orchestrated this play so that he can gauge the degree of reality by Claudius’ reaction, “For murder, though it have no tongue will speak with most miraculous organ? Before mine uncle I’ll observe his looks? If ? a do blench, I’ll know my course” (2. 2. 605-610).

Besides furthering the plot of Hamlet, the play-within-a-play also again develops the theme of appearance vs. reality. The fictional drama being presented before the King is a parallel to the past reality of the King, and will serve to shape the future reality of the King and several other characters. Hamlet, as director of this great deception on stage, cautions the players not to exaggerate their expressions and emotions, stating that only uncivilized “groundlings” (3. 2. 10-11) are impressed by excessive over-acting. In Act II, Scene 2, Hamlet had asked the players to give a passionate presentation of the killing of Priam by Pyrrhus.

Now he specifically instructs the players to “beget a temperance” in the “whirlwind of passion” in order to give it “smoothness” (3. 2. 1-9). He tells them that the aim of the play is to hold “the mirror up to nature,”(3. 2. 23-25) saying that the representation of action should be a realistic reflection of life, with moderation as the keynote (3. 2. 1-45). Hamlet’s advice to the players is important, because it reveals his state of mind before the staging of the play indicating that Hamlet’s own mind has finally reached a reasoned balance.

In summary, the theme of appearance vs.reality is so well developed that everything in the play must be questioned, for nothing appears certain. Hamlet doesn’t know who is telling the truth because of the appearance of some things. Hamlet lives in a reality that appears to be true, but appearances can be deceiving. Hamlet learned that reality is completely different from appearance. The old king Hamlet appears to be bitten by a snake, but in reality he was poisoned, the ghost appears as an apparition, but it’s actually real, and the play-with-in-a-play strongly depicts the theme of appearance vs. reality.

Hamlet Theme of Appearance vs. Reality. (2016, Dec 01). Retrieved from https://studymoose.com/hamlet-theme-of-appearance-vs-reality-essay 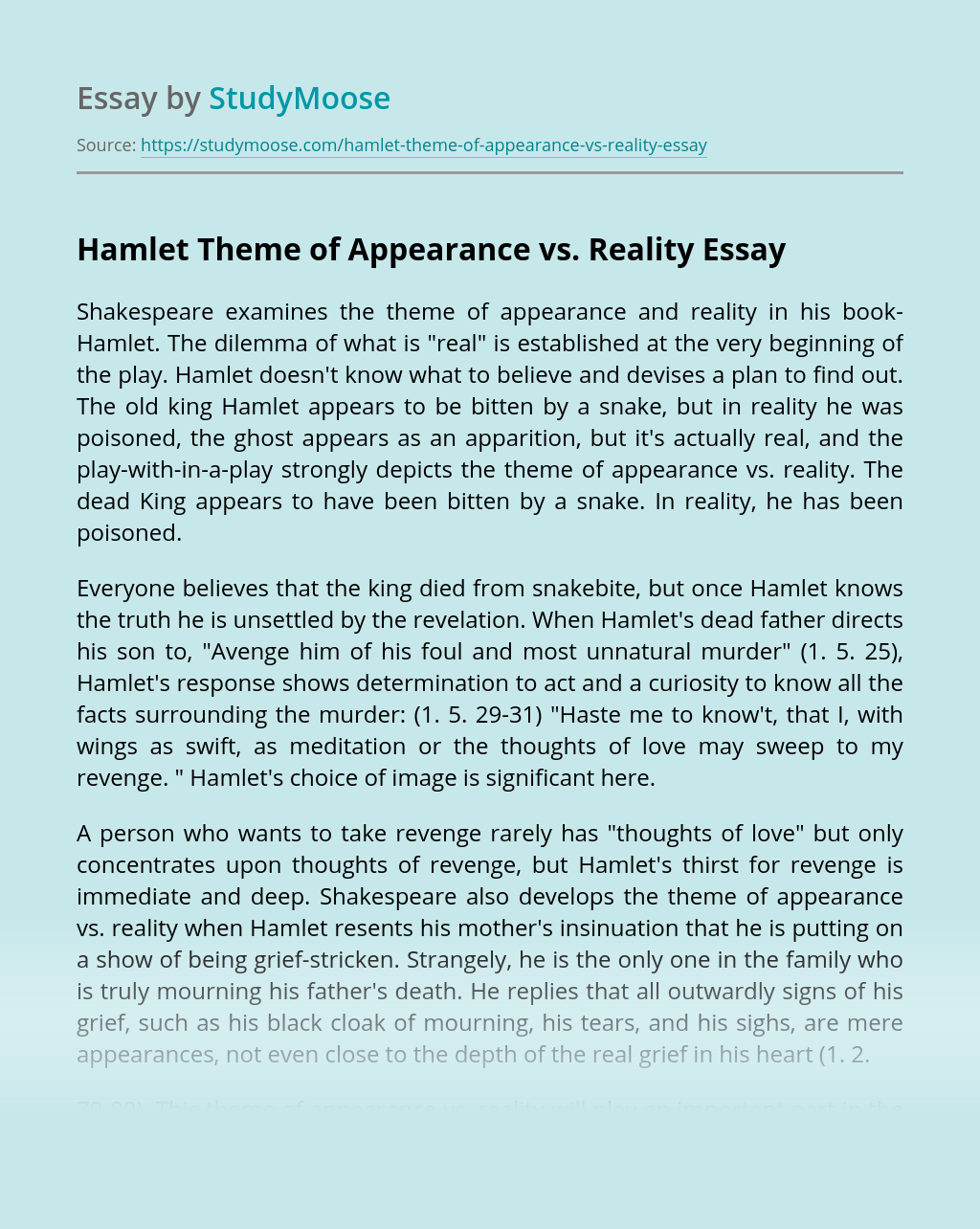 Turn in your highest-quality paper
Get a qualified writer to help you with
“ Hamlet Theme of Appearance vs. Reality ”
Get high-quality paper
Helping students since 2015
Stay Safe, Stay Original