Revolutionary Road was a profound movie. This film portrays the malaise that had lied behind the American Dream during the mid-1950s. During that era, the image of the nuclear family living in suburbia where the man is the bread-winner and the woman as the domesticated housewife was considered as the dominant idea constructed by a patriarchal society. This film tracks the unraveling of April and Frank Wheeler, a couple who had unwantedly settled with two children living in suburbia unable to get themselves out of the empty and meaningless life they have.

Don't use plagiarized sources. Get your custom essay on
“ Gender and Social Issues in Movie Revolutionary Road ”
Get custom paper
NEW! smart matching with writer

April had thought she and Frank were different than everyone else around them that had fallen victim to conformity. She thought they were deserving of a more exciting life and so convinces Frank to move to Paris rather than being stuck as a chance to escape from being a lonely unfulfilling housewife. But as soon as April realizes she is pregnant for the third time, plans to move Paris had to be abandoned which then really sends April over the edge.

Both Frank and April are individuals in their own right, the suffering and inflicting suffering eventually leads to a tragic end to April’s life through a self-induced abortion. As well gender stereotypes, gender discrimination, androcentrism are well indicated within this film and era which will be further discussed.

This film expresses the suffering of how many domesticated women had felt in the era of the 1950s. It reveals the sickness of a culture that tends to shut down a woman’s feelings in the self-serving illusion that a nice home with a yard, committed stay at home mom and a bread-winning husband were the answer for a happy and fulfilling life.

Evidence of female discrimination were depicted when April is shown to take out the garbage and realizes all the trash is perfectly lined up along with one and another along the streets and during the scene where Frank is shown to be standing in the train having a breath of fresh air while having a cigarette (Orawan, 2010). These two scenes basically show the difference in the amount of freedom and choices that a man and woman had, where married women are shown to be confined to their home with their household and childrearing duties, meanwhile the man gets the freedom and choice of going about whatever they like outside their home (Orawan, 2010.).

In another scene showcasing the gender discrimination that was placed on women was the topic on abortion. Besides being a high-risk mortality procedure, it was also illegal during the 50s as a way to prevent women’s autonomy and restrict them to their traditional child-bearing role (Gordon, 1990). As such this was portrayed when April attempts to take abortion into her own hands as a desperate attempt to get her life back in hopes to take control of her life and so to be free to pursue to her dreams (Orawan, 2010). April had no rights over the choice to reproduce due to the standards set by society which had led to her taking the abortion into her own hands (Tas, 2010). It is evident that society at the time had preceded the belief about women’s duty to be subservient to their man and become a baby producing machines plus the ambivalence felt towards women that had led to discrimination of women (Matlin, 2012, p. 39)

The movie clearly presents androcentrism in one particular scene for me, when Frank makes his way to work and all the people around him were men with very few that were women. This just shows the freedom and normalcy of men being able to work and be able to be out during the day. The very few women depicted to be working or on the city streets are only women that were unmarried. To me, this showed that women still had their individual identity until they became married where the women adopts the identity of her husband to become his supportive and obedient wife. Another issue is that even though unmarried women were able to obtain work, but because women were also considered as second class human due to androcentrism they were limited in options as well. Unmarried women were discriminated from higher employment positions with the choices of only low-levels jobs such as administrative or secretarial jobs (Tas, 2014). As it is suggested by Matlin (2012), there are negative attitudes towards women’s competence especially from men of traditional views; as such women during the 50s were seen only capable of dull, mind-numbing jobs.

Gender stereotypes were particularly evident when the Wheelers had told their friends, Miley and Shep Campbells, that they were moving to Paris and that April would take on the bread-winning role making Frank a dependent. In reaction to the news, Shep had thought their plan was immature imposing the stereotypical idea again that married women should not be working and that the man should be the one bringing home the money to support the family; this was the norm. This is clearly evidence of benevolent sexism as it shows the assumption that women should not be held with so much work responsibility and should be taken care of by the man (Matlin, 2012, p. 58). When Shep asked Miley to confirm his opinion about the Wheeler’s being immature, she hesitantly agreed and begins to cries. This scene was of huge significance as this reveals the suffering that Miley feels as a housewife and by her husband’s comment she realizes that her life is hopeless in that she will remain in her current position for the rest of her life. I can see that Miley is just a bit jealous of the Wheelers for making the move to Paris, she desperately wants out but is afraid to tell Shep what she feels inside.

The consequences of internalizing gender stereotypes are represented in the same scene where Miley does not reveal her real thoughts and so allows her husband to further oppress her. Miley is influenced by the gender stereotypes that is presented in society and assumes the role of a subservient housewife. Miley did not say anything to act or rebel against her husband as she is afraid to appear to be a disobedient wife and accepts her husband’s comments about the Wheelers, revealing the fact that she has given up on her own principle. Additionally, Miley cries to let out her emotional frustration in that she then realizes the hopeless and empty life that she holds and inability to express her feeling shows her acceptance of her role in life; this in some way I feel is abusive to oneself psychologically and physically.

Revolutionary Road is definitely a blast from the past taking on a Feminist approach to revealing all the negative effects of women living in suburbia during the 1950s. Due to androcentrism being the main idea of society, many negative attitudes and beliefs about women were expressed in this revealing the gender stereotypes and discriminations that were experienced. The character April Wheeler had revealed the sufferings of living a life with no choices bounded by her house, husband and children. With the women’s movement of the 1970s much of the negative attitudes and discrimination towards women have decreased in North America (Silverstein, 2008). However, I believe the idea of the nuclear family, the American Dream is still seen as for many, such as my family, is still the ideal way of life. 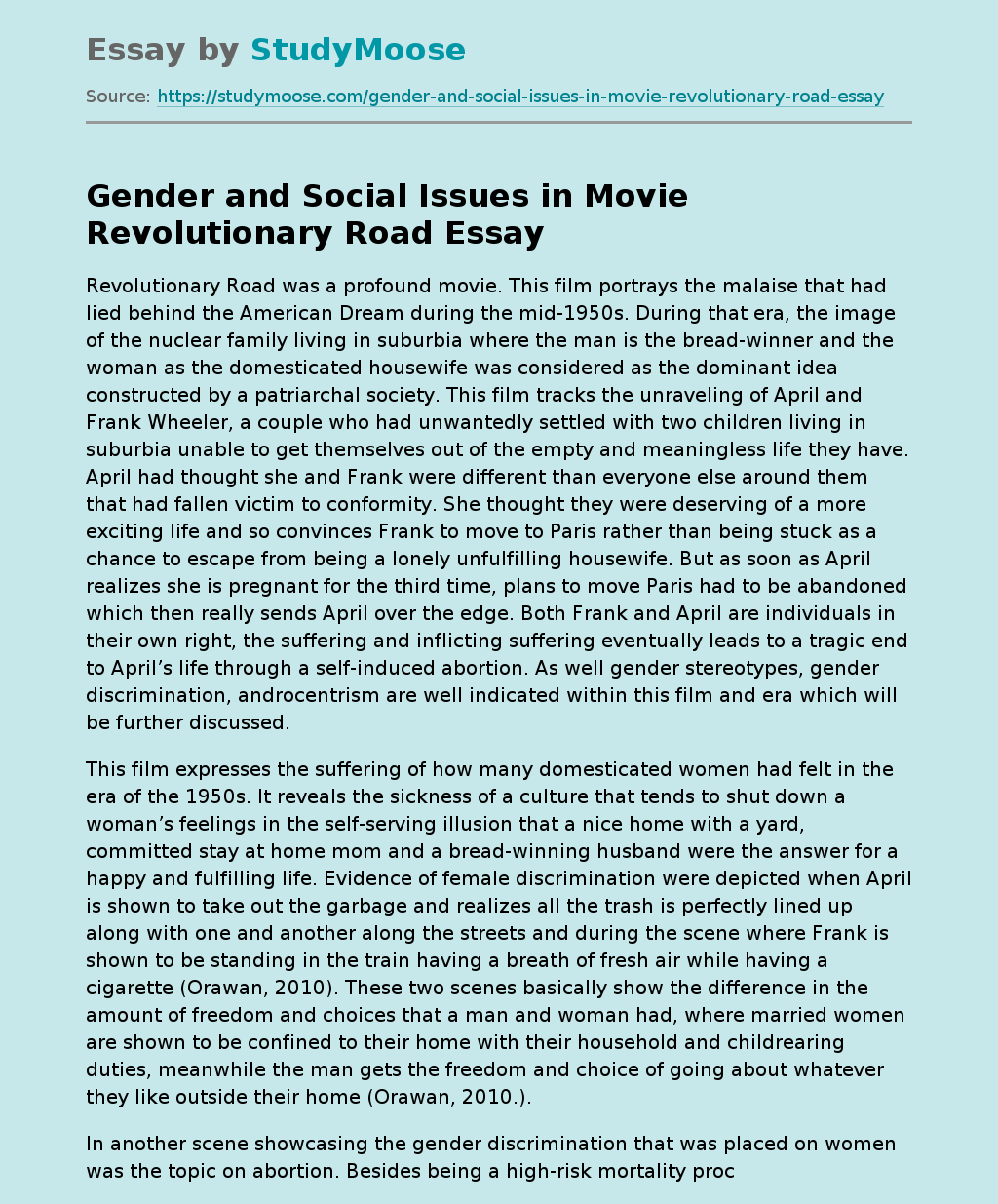