“Luther was both a revolutionary and a conservative.” Evaluate this statement with respect to Luther’s responses to the political and social questions of his day.

Martin Luther was one of the greatest monks, priests, and theological teachers of Germany, along with being the symbol of the Protestant Reformation. He did not start off so religious however. One day he was caught in a frightening and dangerous storm. He prayed to God begging not to be killed, and vowed to become a monk if he survived.

Don't use plagiarized sources. Get your custom essay on
“ Martin Luther Conservative or Revolutionary ”
Get custom paper
NEW! smart matching with writer

He did live, upholding his word to the lord, and joined a monastery. He joined an Augustinian friary in 1505, where he suffered from anfechtung, or spiritual anxiety. He never knew if he was doing enough good works to achieve salvation and gain entrance to the kingdom of heaven, as it was believed by the Catholic religion that it took good works along with faith in order to enter. To take his mind off of his religious worries, he was recommended to a teaching post at the University of Wittenberg.

There, he taught theology and was quite popular among his students. Luther suffered from constant constipation, so he often read the bible while on the toilet.

One day while doing this a certain passage from the epistle of St. Paul to the Romans: “the just shall live by faith,” which led to Luther’s core belief of sola fide, or faith alone. Through this belief, Luther believed that the only thing needed to achieve salvation was to live by faith alone, which challenged the Roman Catholic Church’s theology that both faith and good works were necessary.

Luther shared his beliefs with the people of the Holy Roman Empire, demanding change to the way theology was widely taught. He agreed with parts of the current teachings and was conservative, wanting to keep parts of the religion the same. He kept the sacraments, however reduced the amount of them from 7 to 2. He was also like many Roman Catholic religious figures, anti-Semitic. Lutheranism, as his religion came to be called, became more submissive to the state as well. However Luther also had many revolutionary ideas, which angered those of the RCC. In response to the political problems, he wished to do away with the process of indulgences, which were no more than pieces of paper in his eyes as works had nothing to do with salvation. His nailing of the 95 Theses highly angered the church authorities, as it went against everything they taught and believe. However in his response to the social problem of the Peasant’s Revolt, he told the princes to crush those who rebelled, as social revolution was not his intention.

After careful evaluation, Martin Luther has proven to be both a revolutionary as well as a conservative. Luther proved himself time and again of his revolutionary approach to religion. His best example of this was the 95 Theses. Johann Tetzel, a German Roman Catholic priest, was selling an expensive indulgence as a fund-raising idea of Pope Leo X to finance the building of St. Peters basilica. When one of Luther’s parishioners came to confession, he presented an indulgence he had paid for, claiming he no longer had to repent of his sins, since the document promised to forgive all his sins. Luther was outraged, and wrote up the Ninety-Five Theses, protesting the sale of indulgences, which he proceeded to nail to the door of All Saints’ Church in Wittenberg Germany. He did this on a major Catholic holiday, All Saints Day, which struck at the core of the Catholic religion. The most prominent, challenging, and well known was Theses 86 which read “Why does the pope, whose wealth today is greater than the wealth of the richest Crassus, build the basilica of Saint Peter with the money of poor believers rather than with his own money?” He said indulgences did not do what the Church said it did because salvation was granted by sola fide. The ideas in the Ninety-Five Theses quickly spread throughout Europe via the moveable type printing press. Another time Luther engaged in revolutionary actions was at The Disputation at Leipzig. He was invited to participate in the Church-sponsored debate, as the Church wanted a dialogue concerning Luther’s challenges to Catholic doctrine and practices.

RCC leaders at Leipzig declared that Luther’s ideas were wrong because the pope and Church traditions could not be wrong. Luther then shocked everyone, denying the authority of the pope and church councils. He declared that the only authority on matters of faith for Christians was the Bible. He said that sola scriptura, or scripture alone, determined the belief of Christians, not the teachings of the Pope. Upon the conclusion of the meeting at Leipzig, Luther was threatened with a papal bull of excommunication, which he burned in protest. Luther also showed revolutionary idea at the Diet of Worms. He was called to attend by Charles V, the recently elected Holy Roman Emperor. At the assembly, Luther was asked if he had written the “Ninety-Five Theses,” “The Address to the Christian Nobility,” “The Babylonian Captivity of the Church,” and other works. Luther accepted the accusations and acknowledged that he had written them, and when asked to recant his ideas or suffer the consequences, he requested a night to think about his decision. When Luther returned the next day, he stood firm when asked if he would recant and proudly declared “Here I stand, I can do no other.” Luther was then declared a heretic and became a marked man. Troops of Frederick the Elector rescued Luther and took him to safe hiding in Wartburg Castle, where he proceeded to translate the Bible into the vernacular, which was highly against the teachings of the church and very illegal. He also declared that monks and nuns were not obligated to uphold their vows.

Luther not only acted revolutionarily towards political religious issues, but towards the social issues of the time as well. The most well known was the Peasants’ Revolt. Some religious leaders twisted and perverted Luther’s ideas to benefit their own causes, with the most prominent being Thomas Müntzer. They wrote the “Twelve Articles”: a petition of peasant demands and sent it to the Swabian League that called upon the Holy Roman Emperor to help the peasantry deal with economic and religious issues. When Charles V ignored the “Twelve Articles,” preachers led by Müntzer stirred the masses to revolt against the nobles. Luther believed the peasants were way out of line, as he was adamantly against mixing religious reformation with political and social revolution. He disassociated himself with Müntzer and the revolting peasants. He urged the princes to work together to “slaughter the swine,” or the peasants. He argued that religious subjects must be subordinate to their secular authorities. Luther proved himself a revolutionary over and over through many acts throughout his religious life. Though Luther was a revolutionary, many of his actions also dictate a conservative approach, wanting to keep some things the same or even go back to the way they used to be. An important message Luther delivered was that good Christians owed obedience to established authority in worldly matters. Lutheranism viewed the state with more respect than other religions did. Lutheranism was much more submissive to the state. He insisted that

Christian liberty was an internal freedom, known only to God. Luther wanted the church teachings to go back to how they used to be, based on sola scriptura or scripture alone, without the need of outside interpretation by the pope, bishops, abbots, etc. He was conservative in that he made many alliances with princes who liked his ideas, spreading them to their own kingdoms. He didn’t side with armed rebellions, citing his name, against the nobility in regions of Germany, instead he backed the nobility, telling them to work together to “slaughter the swine.” He did not want to do away with the sacraments, however he did want to reduce them from seven to two. This showed how he did not want to change all parts of the Roman Catholic religion, only parts. Also, like most religious figures of the time Martin Luther was anti-Semitic. He wanted all the Jewish people to convert to Lutheranism, as he did not believe the Jewish religion was correct in its teachings and beliefs. He restricted the right of private judgement in matters involving conscience, but never denied it. A conservative in the way he did things, Luther was truly a great leader. Luther believed that the only thing needed to achieve salvation was to live by faith alone, which challenged the Roman Catholic Church’s theology that both faith and good works were necessary. Luther shared his beliefs with the people of the Holy Roman Empire, demanding change to the way theology was widely taught.

He agreed with parts of the current teachings and was conservative, wanting to keep parts of the religion the same. He kept the sacraments, however reduced the amount of them from 7 to 2. An anti-Semitic, Luther displayed similarities with other religious officials. Lutheranism became more submissive to the state, as Luther believed that in worldly matters religion has to listen to authority. However Luther also had many revolutionary ideas, which upset those of the RCC as it went against the basics of Roman Catholic teachings. In response to the political problems, he wished to do away with the money robbery of the selling of indulgences, which were no more than pieces of paper in his eyes as works had nothing to do with salvation. His nailing of the 95 Theses made the power of the church authorities fluctuate, as it went against everything they taught their followers and everything they had been taught.. However in his response to the social problem of the Peasant’s Revolt, he told the princes to crush those who rebelled, as social revolution was not his intention. He meant to keep the matters of social or political problems separate from religious reform. After carefully evaluating his actions, Martin Luther has proven to be both a revolutionary as well as a conservative on multiple occasions. 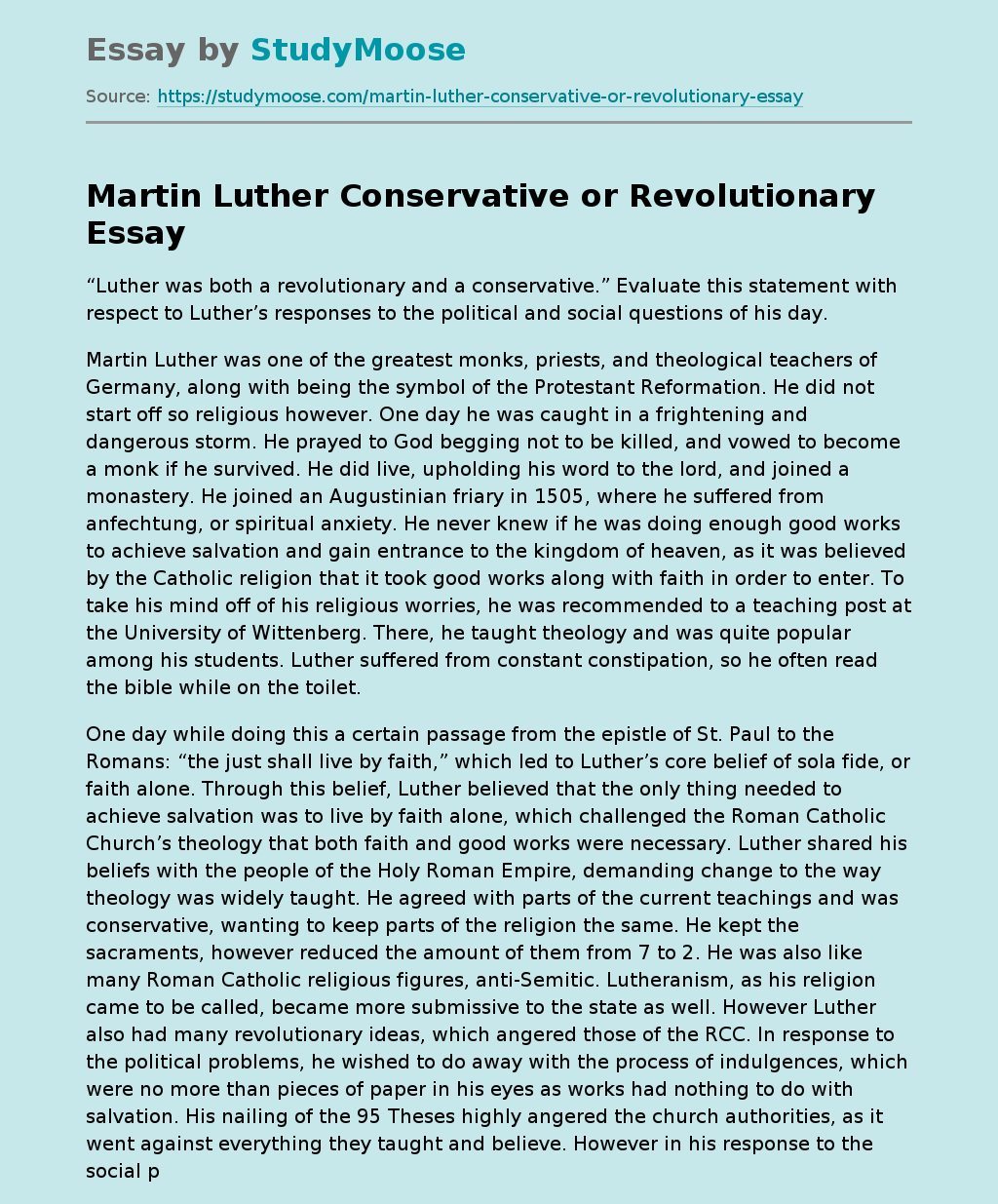