Glory Road is film about an interracial college basketball team from the 1960’s. In the movie, a young coach moves to a new town to be the head basketball coach at a small division 1 university. The film demonstrates many examples of motor learning including: characteristics of learning, punishment, advanced skill characteristics, individual differences, and the 3 things that interfere with performance.

Learning is a set of processes and requires practice and experience. Don Haskins, the coach in the film, provided his squad with many different kinds of opportunities to learn.

Don't use plagiarized sources. Get your custom essay on
“ A Movie Analysis: Glory Road ”
Get custom paper
NEW! smart matching with writer

While on a recruiting trip, Don finds himself on the court with a future player. As they are playing a little one-on-one, Don handily stops the young player. He then proceeds to teach him the rocker step, a new skill. This was a learning situation, in which the student was attempting to acquire a new skill. At this point, the athlete would be considered to be in the cognitive stage of learning as his performance was still somewhat inconsistent and variable.

Although the continued stages of learning are not shown in practices in the film, the athlete later uses the skill while in competition, suggesting that he had since mastered the new technique placing him in the autonomous stage.

Punishment played a huge role in the film and there were numerous examples of how Coach Haskins used this aspect of motor learning to help his team grow. Perhaps the first instance of punishment in the film was when some of the players were caught breaking team rules.

They had traveled off campus at night in order to have a little fun on the town, participating in activities they ought not to have participated in. Trust is an important aspect of any team sport, so when that trust was broken Coach Don Haskins was inclined to punish his players. However, he did not just punish the perpetrators but everyone was required to pay the price. Everyone ran sprints to begin that practice for a few of the athletes’ disobedience. At first, the observer may be tempted to comment on the inequality of Coach Haskins’ method. But this method of punishment enforces the fact that they are a team and what they do affects one another. In the end, it helped the squad grow stronger in their friendship and comradery with one another. Punishment which is game-like is most desired. In this instance, there could have been a more game-like punishment but speed and agility are also highly desirable traits in the game of basketball. Running wind sprints helped condition the team to be able to keep up with their opponents and ultimately win. The benefits were especially noticeable in the final game against Coach Rupp and an experienced Kentucky squad. Coach Haskins played only 7 players the entire game. These players were surely exhausted by the end but exhibited their stamina gained in part from the punishment of their coach. This is a good example of punishment because it helped the team achieve their goal.

The Texas Western Miners exhibited many characteristics of advanced skill including their internal nature of motivation. Before the beginning of the season, Coach told one of the players that he was being cut from the team. This player, Shed, was devastated. He exclaimed that he would never be able to look his daddy in the eyes again. Coach said that he didn’t care and that he hadn’t earned the right to stay. Shed decided to go to the gym one last time and shoot around a little bit. While he was there, pretending to hit game-winning baskets he realized that he had what it took to stay and play. His motivation to play rose that night to a level which could not be diminished. The next day, in practice, he showed up demanding that Don Haskins let him play. Coach decided to let him stay because of his determination and extremely high motivation to play the game of basketball. In addition to the motivation of the Miners, they also exhibited a great deal of adaptability. When they played in different venues they were required to put up with a lot of negativity from fans of opposing teams. Also, each team they played was different, with different strengths and weaknesses. One reason that this team was so successful was because of their ability to adapt to the opponents they faced.

Perhaps the greatest lesson learned from this movie is the fact that individual differences, specifically social differences, can be overcome to achieve greater heights. Unfortunately, many individuals in the South at this time were still very partial to racism. The Miners experienced a great deal of persecution and overcame a great deal. Even the school administrators and boosters of Texas Western were displeased with Coach Haskins for bringing in so many colored players. When he started three black players, they really questioned his methods. However, the administration proved to be the least of their problems as they progressed throughout the season. The team played well together and the players learned to see past color faster than the rest of the community. On the road, some communities were less accepting than others. In one arena, the fans yelled, spit, and threw food at the players as they came out of the tunnel and onto the court. Surely, this experience would have been terrifying for the team. But they stuck together and grew stronger. In another instance, some community members could not set aside their social differences and actually beat up one of the black players in a bathroom, leaving him bruised and bloodied. Unfortunately, many also believed that because the players were black, they had less capacity for intelligence and ability to perform under pressure. The Texas Western Miners proved them wrong as they won the NCAA Championship.

Three Things that Interfere with Performance

First and foremost, personal problems can significantly alter an athlete’s ability to perform. Harry was having a difficult time in school and coach threatened to punish him unless he got his grades up. Eventually his mother showed up at the school and he was back on track in no time. But had he not pulled his grades up, the team surely would have suffered for his laziness. One of the athletes got into a relationship with a girl that perhaps altered his game slightly. Coach found them on the roof of the dorms one night and the athlete was required to run stairs for a long time as a punishment for breaking team rules. Injury can also play a huge role in the performance of an individual. Willie Cager, one of their big guys, was diagnosed with a heart condition as a boy. This was not made known to Coach Haskins in the beginning. When he eventually found out, he was unwilling to play Cager and didn’t allow him to dress in his uniform for games. The last thing that can interfere with performance is performance variables. This has previously been discussed, but the crowd can greatly influence the ability of the athlete to perform. This film is great example of the tenacity and maturity required to overcome such obstacles and still win under the harshest of circumstances.

Coach Don Haskins was the first in NCAA history to start five black payers. He helped change the way people thought through his decisions as a basketball coach. Sport can be a powerful social tool. While addressing problems with society, Coach Haskins and his squad also demonstrated important principles in motor learning such as the power of punishment, overcoming individual differences, and some key characteristics of learning. Glory Road exhibits that even against all odds, highly motivated individuals can accomplish a great deal more than what is expected of them. 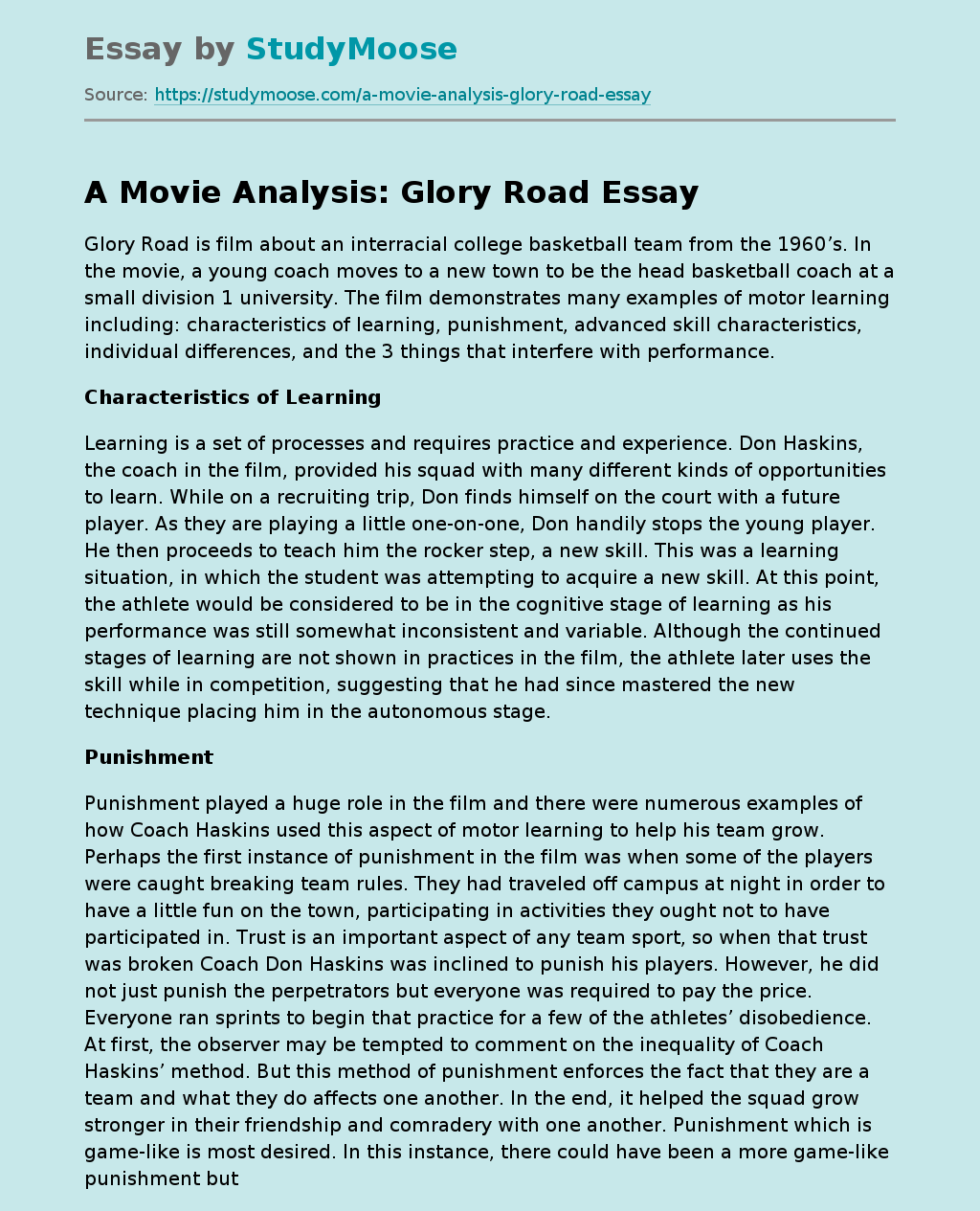