Siegfried Sassoons Glory of Women is a poem depicting the roles which women played during World War I. The poem is made up of a series of sarcastic statements about women. Sassoon attempts to use these statements to convey the cruel and ironic side of the war that women do not tend to see.

Glory of Women is a war-time lyric, constructed of 14 lines, with a varied rhyme scheme of ABABABAB CDECDE making it a Petrarchan (Italian) sonnet. It is divided into two sections, the octave which consists of the first eight lines, and the sestet the final six lines.

Don't use plagiarized sources. Get your custom essay on
“ Glory of women ”
Get custom paper
NEW! smart matching with writer

It is written in iambic pentameter, which helps clarify the meaning of the poem as you read it.

The title of the poem itself is ambiguous, posing the question whether womens roles during war are glorious as the soldiers on the battlefield. A number of techniques were used in this poem to communicate Sassoons idea of emotional truth about the war.

Sassoon speaks directly to the readers by writing in second person You, an attempt to involve the readers and bring attention to those he directed this poem at women. He also uses assonance which creates a euphonious effect when being read.

The poem begins with a praising tone, with sarcasm and bitterness scattered throughout the rest of its content. You love us when we’re heroes, home on leave, Or wounded in a mentionable place.

depicts womens ignorance in regards to war, believing soldiers to be heroes only when they are wounded in a mentionable place.

The Great War offered many job opportunities for women that had long been denied them. You make us shells. portray the many women who were recruited into munitions factories during the war. This line is ironic in a sense that it is the shells that kill the soldiers, whether they be British or German. It is a juxtaposition to line 8 And mourn our laurelled memories when we’re killed, depicting that the women make shells that kill soldiers, and are therefore further heating the conflict of war, creating more deaths and mourning.

Strong imageries were presented in the final three lines of the poem, a German mother knitting socks for her son while he lay dead in the mud. This imagery shows the ignorance and how much knowledge and experience women have about the truth of war. It is intended to distress those women who tend to spend time at home, and have no idea of the brutality of war that Sassoon and many other soldiers had experienced. This imagery is also a contrast of women and mens roles during The Great War. Sassoon is anguished by the fact that women sit at home comfortably while soldiers are risking their lives on the battlefield.

The imageries from the final three lines also depict that whether it be British or German, the soldiers are all individuals. His face is trodden deeper in the mud. allowed readers to empathize with the honour that dead soldiers often receive. German soldiers also have women to mourn their laurelled memories when they are killed.

The emotions that Sassoon portrayed in this poem are both horrifying and miserable. Trampling the terrible corpses – blind with blood. describes the realism of war, in contrast to By tales of dirt and danger fondly thrilled. Sassoon believes that women perceive war as a heroic story, where in reality it is full of blood and violence.

Therefore, the title and the content of this compelling and powerful poem are written in pure irony. In Sassoons opinion, women cannot earn glory by knitting at home, nor by making shells that encourage further killings. The use of narration in second person effectively leaves readers with an understanding of the brutality of war, and an insight into the roles which women played during World War I.

Kanaya, T. Sassoon’s Use of Irony in “Glory of Women”, http://www.haverford.edu/engl/english354/GreatWar/Sassoon/Sasslehr.html, 1997.

Lehr, A. On Glory Of Women by Siegfried Sassoon, http://www.haverford.edu/engl/english354/GreatWar/Sassoon/Sasslehr.html, 1999. 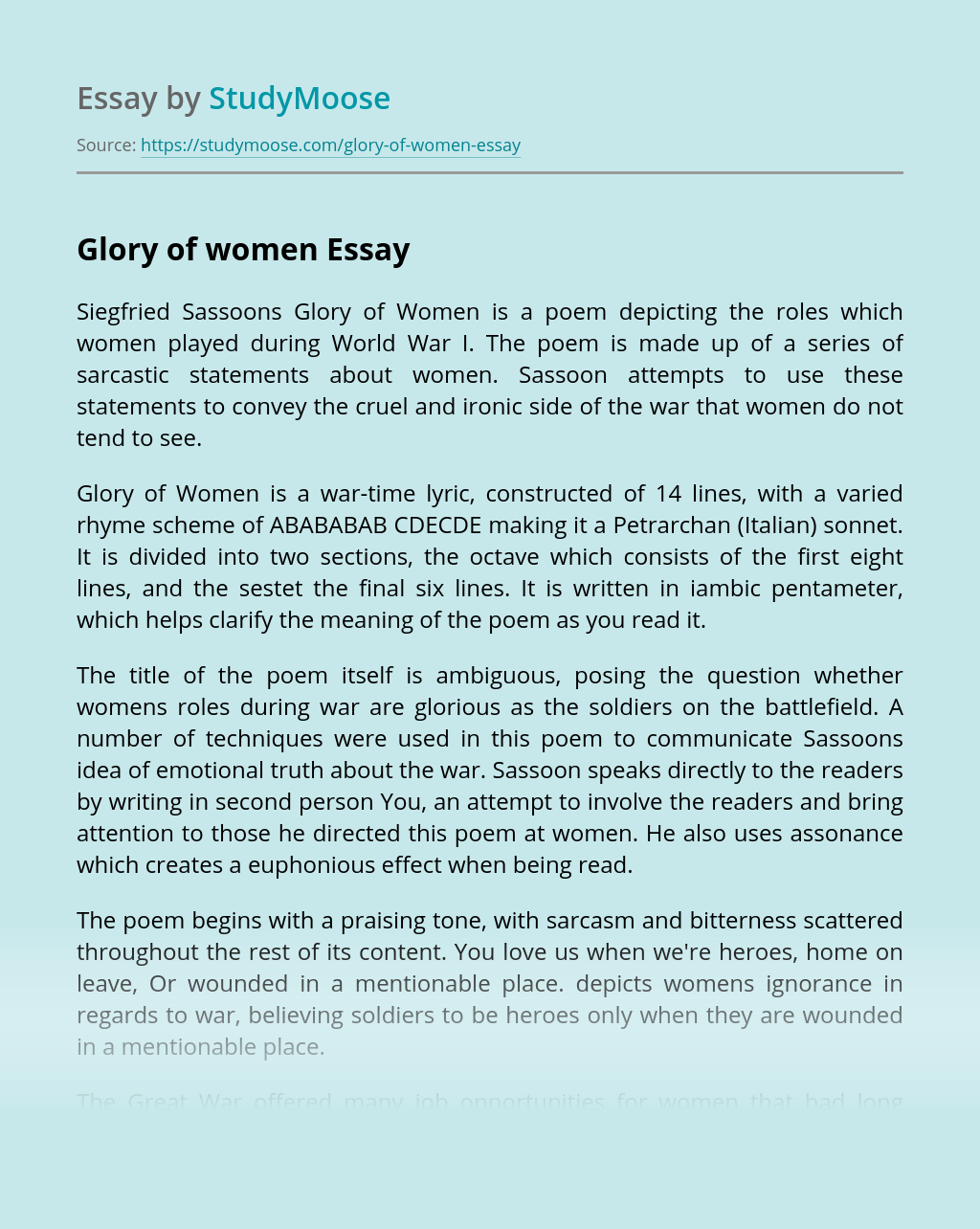