Suicide in the trenches Essay

Subject matter: the poem is about the depression of a young soldier. The depression of this young soldier before he commits suicide is clearly displayed in the poem. At the start of the poem, the image of a happy, young, and perhaps rather naïve boy is placed before us; ‘Simple’ tells us that he is innocent, perhaps rather naïve, and doesn’t understand the concept of war. ‘Grinned at life in empty joy’ suggests to us that he was pleased by anything, a happy young man.

Don't use plagiarized sources.
Get Your Custom Essay on Suicide in the trenches Just from $13,9/Page

He was young and had no worries because he enjoyed life and did as he pleased. He made life seem easy and happy even when times were bad. ‘Slept soundly through the lonesome dark’ tells us that the dark did not afraid him. We can think from this line that perhaps he would never sleep soundly again after spending time in the trenches, as dark meant the threat of attack there.

‘Whistled with the early lark’ creates an image of a rather enthusiastic young man who awoke bright and early, and was happy to be awake and living.

Again, we can gather from this that in the trenches, men were not happy to wake, and to them, living meant pain. As ‘lark’ is a spring bird, it seems to represent here youthfulness. However, after this stanza, the image of a happy young man is obliterated by the dark, depressing time that is put before us, and we begin to feel the depression of the young man; ‘Cowed and glum’ tells us that he is no longer rising early with the lark, he is now longer happy, but hiding away and depressed. The depression of the soldier is clearly emphasized in this line; ‘cowed’ tells us that he is turning away, intimidated and scared of war. ‘Glum’ sums up his emotion; he is depressed, gloomy, tired, upset. ‘Crumps and lice and lack of rum’ this line adds to the depression of the young soldier by building up the depressing setting surrounding him.

‘Crumps’ shows that destruction is still occurring around him while he is simply sitting ‘cowed and glum’ on his own, loud explosions surrounding him while he sinks into depression. ‘Lice and lack of rum’ shows the dirtiness of the trenches; ‘lice’ tells us of dirty, animals spreading diseases in the trenches, whereas ‘lack of rum’ shows the meagre supplies the soldiers had whilst out on the front line. Lack of rum could also represent that nothing even alcohol couldn’t make him forget his depression. ‘Winter trenches’ again creates a contrast to the previous stanza; as a ‘lark’ is a spring bird, we gathered from the first stanza that Sassoon was describing the spring months; sunny, bright, fresh, all plants and animals coming out of hibernation. This season matches the young boy’s personality. In the second stanza, the season is described as winter; dark, gloomy, glum. In turn, this season again represents the boy’s personality; as the season has changed, so has he.

‘Put a bullet through his brain’ this line shows us how the trenches symbolize the harsh reality of war in the poem. Throughout the year till winter, the trenches transform a carefree, innocent and happy boy into a depressed, boy who “put a bullet through his brain”. The alliteration of the letter ‘b’ here also further creates a harsh, brutal and bitter sound that adds on to the bitter mood, especially at the climax of the story told – the suicide. ‘No one spoke of him again’ this line shows us how many soldiers who fought and died in the trenches were forgotten. The fact that ‘no one spoke of him again’ shows that all the suffering him and many others went through was forgotten; as death was such a common occurrence in the trenches, they all eventually merged into one, and the individual personalities of the soldiers who died were forgotten.

Theme: Clearly then, death, memories and depression are the main points of this poem. The poet wants to create a strong emotion, a young soldier who is falling into a depression so strongly that he commits suicide. This poem is about how people think war is glory and such but is really so horrible that the mind cannot deal with it. Propaganda vs. reality? War breeds hopelessness? War kills youth and laughter and humans.

This poem is very good at explaining how war changed the soldiers who went to fight; this is shown in the second stanza, when the soldier whom the poem is based on has changed from ‘rising with the early lark’ to ‘cowed and glum’. This change also shows how many men were driven to suicide; they would rather ‘put a bullet through their brain’ than carry on; this shows the awful reality of life in the trenches. And that is very concerning

Poetic techniques: This poem is a lyric which contains of three stanzas each containing four lines. This is written in rhyming couplets, the style of the poem seems very simple and song-like. There is a change in mood where the first stanza talks about the despair when he is in the trenches. In the third stanza we move to the poet’s anger about the way that people at home feel The structure of the poem (AABB CCDD EEFF) also adds to the stark change the boy has suffered throughout the war. Sassoon used this structure which everybody can understand, even children, and this is perhaps intended to emphasize that this boy, turned into a soldier and driven to suicide, was still just a boy. Throughout the last stanza a sarcastic, sneering and rather angry tone is used; ‘With kindling eye’ represents the crowd’s eyes lighting up when the soldiers go by.

This line is a metaphor; ‘kindling’ represents the starting of a fire, so here represents the light shining in the eyes of the crowd. Perhaps this line is used to show that the crowd assumes a superficial sadness when the soldiers go by; they want to show that they are patriotic, that they understand and appreciate what the soldiers have been through, when clearly Sassoon is saying that they don’t; the crowds view participation in the war as a glorious thing, when the soldiers know themselves there is nothing glorious about the trenches and the horrors that occur there. The word ‘kindling’ also reveals that Sassoon views the crowds as hypocritical; they think that they understand what war is like, that they appreciate everything the soldiers have done for them, when in reality they don’t care or feel appreciative of what the soldiers have done.

Therefore, the word kindling reveals the hypocrisy Sassoon feels is behind people who support war. ‘The hell where youth and laughter go’ this line, in my opinion, is perhaps the most effective one in the poem. The hell imagery used in this line creates an evil and horrific atmosphere for the reader. The word ‘hell’ is very effective; hell is a place people are sent for punishment; the home of evil and the devil, and the crowds are cheering the soldiers on when they return from what they think is a ‘glorious’ place. The contrast of the public’s view of war; glorious, patriotic and honorary, creates a contrast with Sassoon’s view of war; hell, dark, depressing, evil. ‘You smug-faced crowds’ The use of ‘you’ makes the reader feel as if Sassoon is addressing the reader, naming us all guilty of the smug-faced cheering and clapping of the soldiers.

‘Smug-faced’ makes us feel as if the crowd, to the soldiers, are rather vain, thinking that they are being patriotic and contributing to the war effort by cheering the soldiers. Sassoon successfully conveys that he feels the public are unable to relate and empathize with the soldiers because they cannot possibly understand what war is like without experiencing it for themselves. This quotation has a link to the previous stanza; ‘no one spoke of him again’; the crowds cheer those on who come home and think that they care and understand about the war, but with so many dead and forgotten, this pretence seems rather ridiculous when a boy has just died and been forgotten as if he never existed.

In conclusion, Siegfried Sassoon’s poem “Suicide in the Trenches” effectively communicates Sassoon’s own hatred for war. His images of a young boy, a desperate soldier, and the “smug-faced crowds easily enable Sassoon to convey this hatred. The poem is an accurate representation of the psychological effects of war on the soldiers who were sent to fight.

Suicide in the trenches. (2016, Apr 23). Retrieved from https://studymoose.com/suicide-in-the-trenches-essay 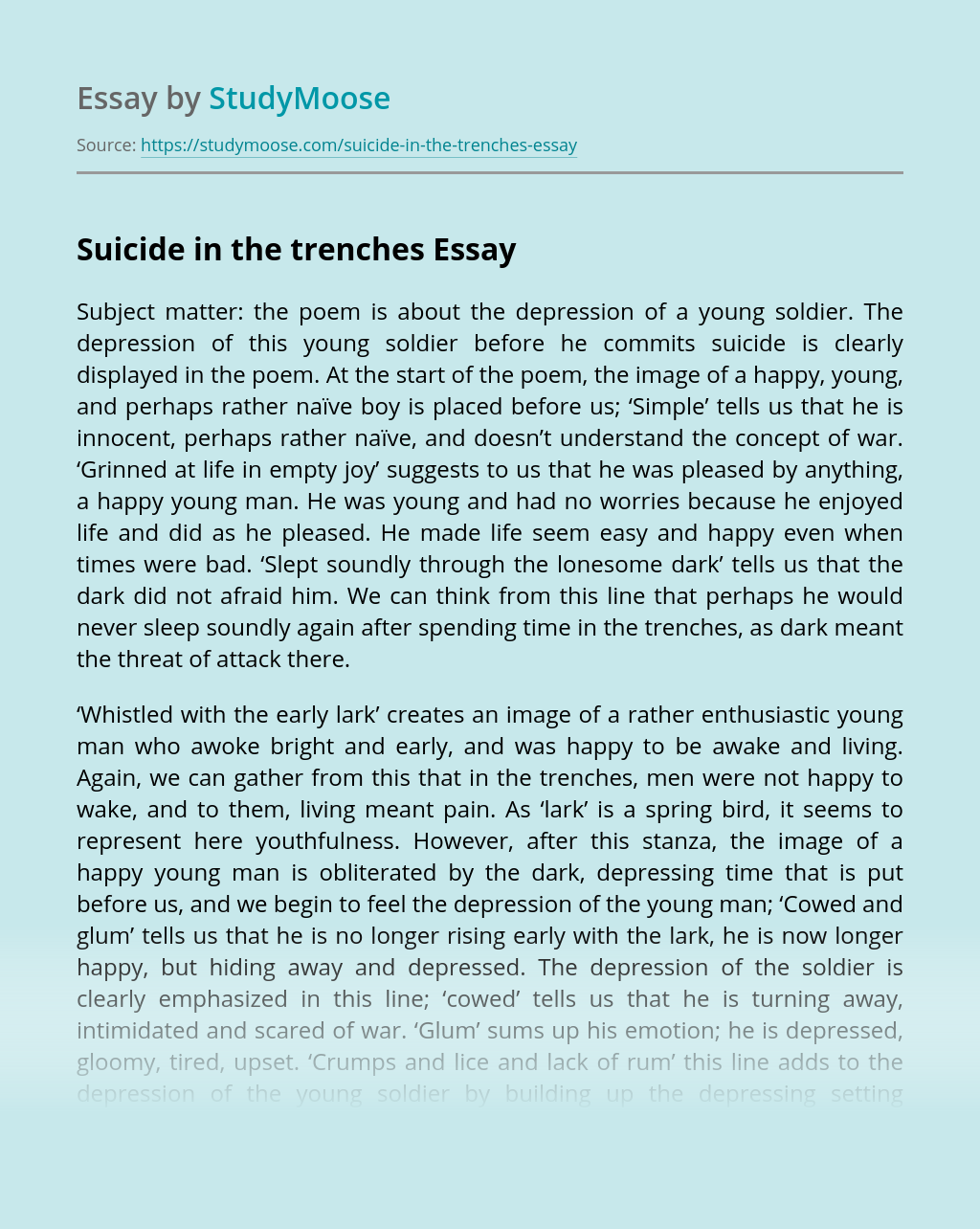 Childhood and Adolescent Depression and the Risks of Suicide

Introduction Problem and its Background             One of the most common reasons for referral of children and adolescents to mental health professionals is suspected depression. There are continues debate as to whether childhood and adolescent depression are a reflection of normal variation in mood. It is reasonable for the primary care physician to view childhood... VIEW ESSAY

Was the most devastating stock market crash in the history of the United states The crash signalled the beginning of the to-year Great Depression that affected all western industrialized countries. On March 25, 1929 a mini crash occurred after investors started to sell stocks at a rapid pace, exposing the markets shaky foundation. 100,000 American... VIEW ESSAY

The Role of the Youth in Establishing Unity in a Diversified Multicultural Society Years passed, adults have tried to control youth because they represent the future. Young people often fight back, trying to create their own world that is separate from their parents. At the end of World War II they were finally given a... VIEW ESSAY

T: Based on the name of the title, I predict that the lyrical poem is about the fast ride through life, and how you should stop and smell the roses sometimes, to cherish life. P: This is a narrative lyric that tells a story about a girl with a rough life. However she uses her... VIEW ESSAY

History and memory are both needed to uncover human experiences. We are already aware, from ourselves, that memory can be defined as recalling or recognising ones past and previous experiences and events; however memory is dependent on one’s involvement and personal perception of their past. History is the meaning of documented records of past events,... VIEW ESSAY