Happiest Day of My Life

I was excited to the nerve that my father was finally in town and even more when he informed me that he has been given free tickets to the fifa world cup finals 2010 between Spain and Netherlands . i was absolutely thrilled to hear this from him. I am a huge Spain fan as I absolutely adore the club. I was very keyed up about watching Fabregas , David Villa and of course Torres in person as I am a big fan of these players.

Don't use plagiarized sources. Get your custom essay on
“ Happiest Day of My Life ”
Get custom paper
NEW! smart matching with writer

We took the flight to Johannesburg just the next morning as we had planned. We reached the marvelous place which looked even more marvelous during this FIFA season.

We decided to tour the city and went to the nearest shopping mall Oriental Plaza. While on the way to the place my father informed me that this was the city where Mahatama Gandhi stayed 100 years ago. The mall was so named because it gives a taste of the orient in Africa.

After this we headed to the stadium. My first impression when I arrived at the stadium was one of awe. A number of people outside the stadium appeared to be singing. I purchased a vuvuzela, got the Spanish flag painted on my face and then proceeded into the stadium and found my seat and felt content I had a good enough view of the pitch.

The time for the match came and I grew extremely enthusiastic. The match had a large number of fouls, with both the teams playing equally rough.

So much that although the goal scores remained 0-0, the yellow card scores kept raising. The match referee Howard Webb of England had a tough time and the final count was 14 yellow and 1 red card, Netherlands winning here 8-5. The score was 0-0 for the entire 90 minutes of the game and the first 30 minutes extra time as well, with Spain having 57% ball possession and 18 shots with 8 of them on target.

Netherlands had 43% possession and 13 total shots with 5 on target. The bookings continued after the break . The dutch had a glorious chance to take the lead in the second half but Arjen Robben, comfortably his team’s strongest attacking weapon, could find no way past Spain captain Iker Casillas. I was at the edge of my seat when in the 116th minute Cesc Fabregas’s pass to the young midfielder Iniesta who struck it into the net making their captain and goal keeper Iker Casillas drop to the floor and cry out tears of joy after the final whistle.

This made Spain the first team to win a World Cup after losing their opening game of the tournament. And once again the German octopus Paul Allen’s predictions came true. Then Spain was honoured with the 6. 175kg gold trophy. The Man of the Match was obvoiusly awarded to Andres Iniesta it was followed by a loud roar. And the prestigious Golden Glove Award to their captain and goalkeeper Iker Casillas. The Golden Shoe Award as well as the Best Young Player Award was given to Thomas Mueller of Germany and the Golden Ball was awarded to Diego Forlan of Uruguay.

Happiest Day of My Life. (2017, Mar 09). Retrieved from http://studymoose.com/happiest-day-of-my-life-essay 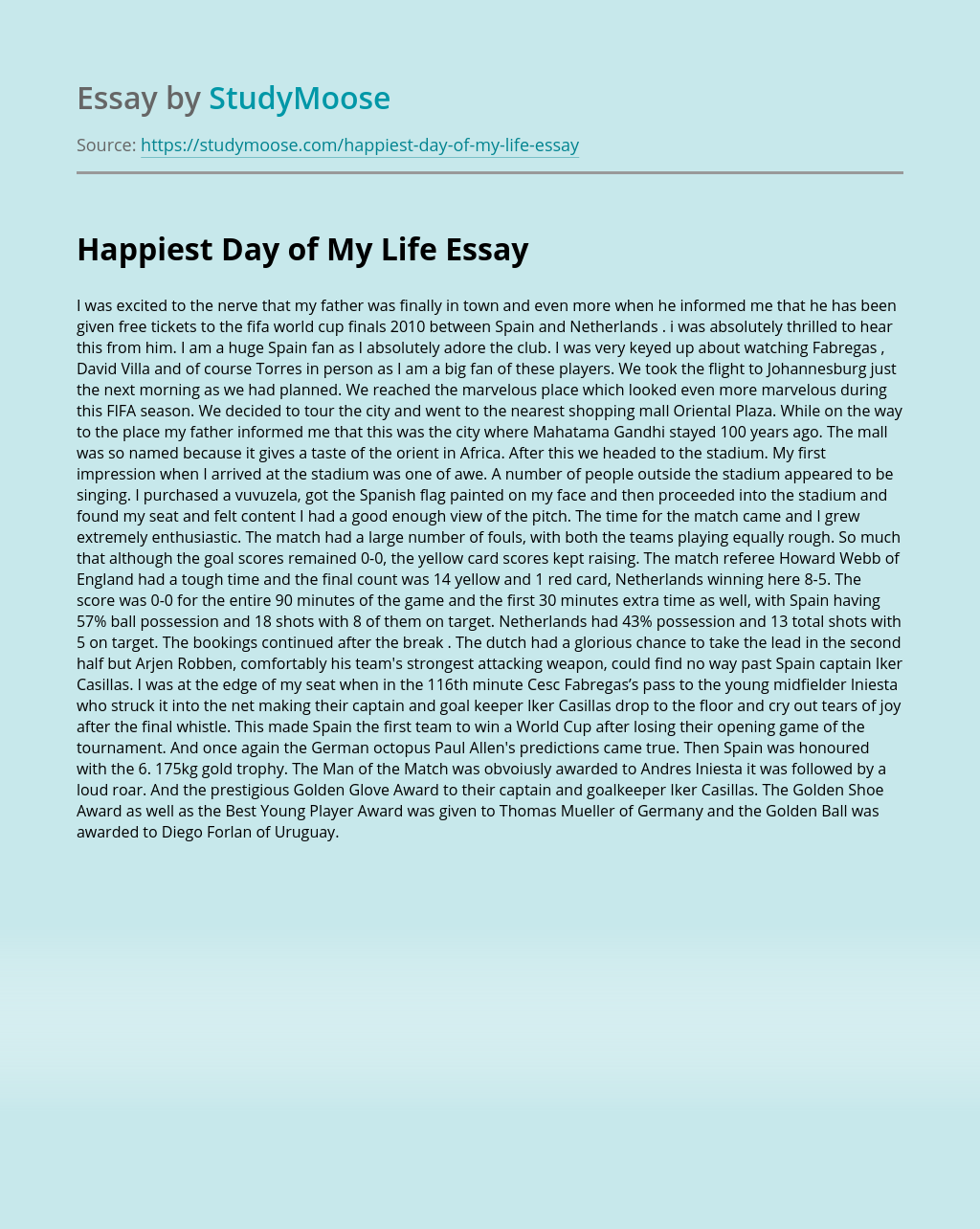