Bhabani Bhattacharya staying true to his moral values writes this story highlighting the social problems of contemporary Indian society, in a truthful and honest form.

The story revolves around Satyajit who, after building an empire of wealth and abundance in the city suffers a sudden collapse.

The story begins with Stayajit in Kolkata and enjoying the most successful days of his life. He works in a bank. One day he catches hold of a man trying to encash an unsigned check.

Don't use plagiarized sources. Get your custom essay on
“ Glory At Twilight ”
Get custom paper
NEW! smart matching with writer

The check turned out to be a forgery and this proved to be Satyajit’s ticket to pleasure and luxury in life. He gets promoted owing to his honesty and climbs the ladder of professional success.

However, along with his ascension, he has to compromise his morals and fundamental values. This weighs heavily on his conscience but the comforts of his life keep him distracted.

He soon marries and starts a family and continues his rise to the pinnacle of his profession.

But suddenly his company goes bankrupt and so does Satyajit. His world comes crashing down all around him. He hides his condition from his wife One day he sends her and their kids away on vacations.

However, he is still hungry for fame and adulation and almost addicted to it. He remembers that he has a wedding invitation for Uncle Srinath’s youngest daughter who lived in his Shantipur. He deiced to return to his village where he still owned a house and fish pond.

Therefore, he returns to his village where people still revere him and consider him a big shot millionaire.

He is welcomed with open arms and lavish praise. He is paraded throughout the entire village and lauded publicly.

He meets and showers his blessing on the young bride. He also plans to gift the couple 100 rupees as wedding present. He cannot afford more than that. He is saving another 50 rupees to buy a pram for his own child.

But when the groom arrives, Uncle Srinath asks Satya to lend him money to save his daughter’s marriage. The groom demands 2000 rupees. Satya argues that he is not carrying his check book and cannot help him out. He advises his uncle to borrow some money from the village usurer or moneylender, Harish. His uncle informs him that Harish wants collateral to keep as security for the money. Since, uncle Srinath has nothing more to mortgage; Satyajit offers his house and fish pond as mortgage for the money, even though he earnestly wants to bequeath them to his wife and kids.

The wedding goes on without any other hitch. While uncle Srinath and his family rejoice the occasion, Satya could not but wonder what would he do, going forward.

Thus, just for momentary fame and glory (as brief as the time of twilight) he risks his wellbeing and safe future of his family. It is indeed a huge cost for a meager reward. 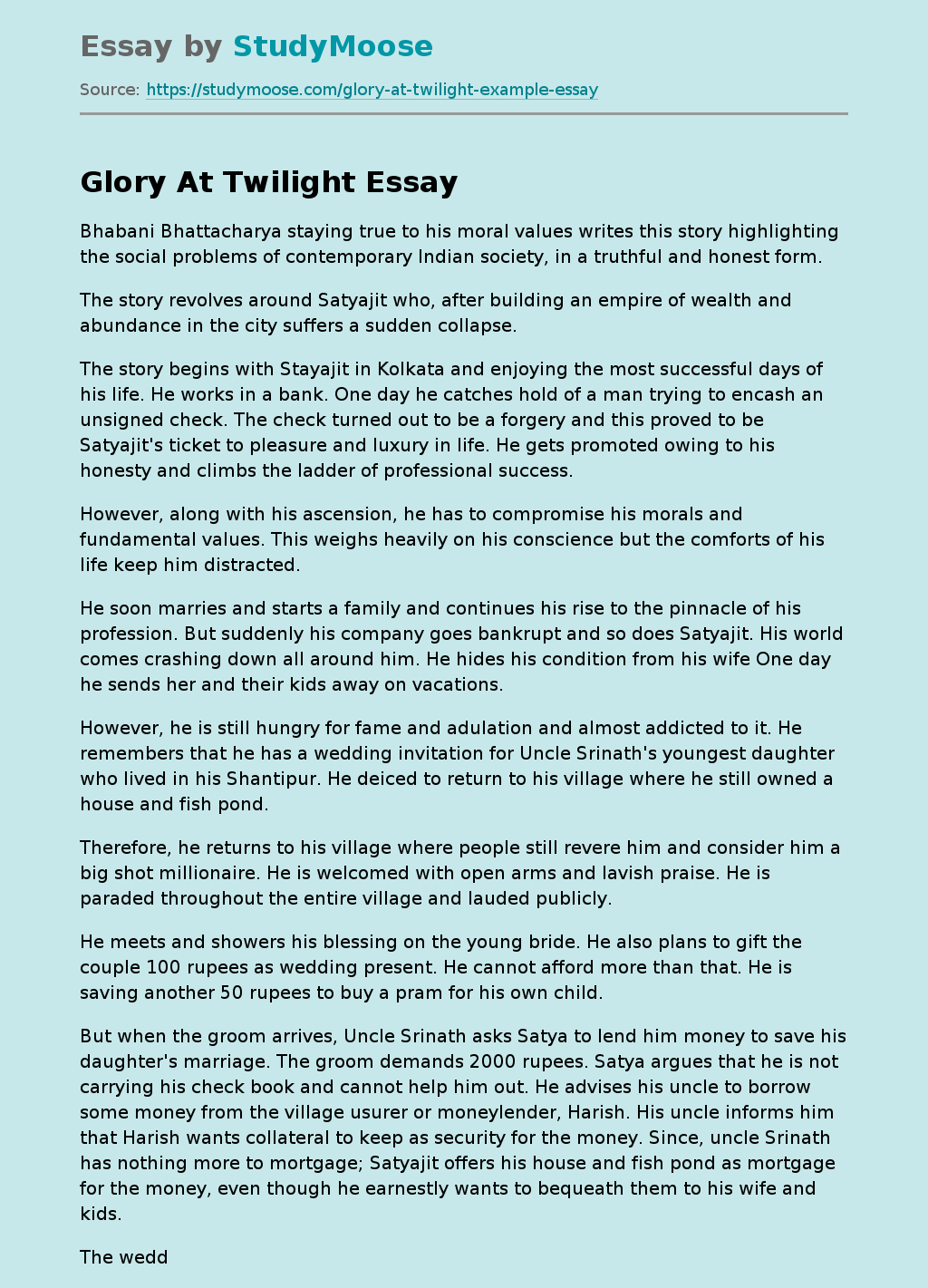