Anna Karenina in Pursuit of Happiness

What is this constant need for more in life? Cant we Just be happy with what we have? Curiosity and a desire to push the limits stunt the worthwhile goal of a lasting contentment. In Leo Tolstoys Anna Karenina, Anna’s life is spiritually empty, and so she fills it with earthly pleasures (such as adultery) to fill the void. Levin, the other protagonist, also feels throughout the story as though something is missing in his life, but ends up actually discovering what will maintain his happiness in the long run.

Don't use plagiarized sources. Get your custom essay on
“ Anna Karenina in Pursuit of Happiness ”
Get custom paper
NEW! smart matching with writer

A main theme in the book is whether or not it is possible to preserve a happy life in a healthy way. Both characters, Anna and Levin, demonstrate how and how not to accomplish this. Filled with despair and hopelessness, as well as completeness and awareness, Anna Karenina shows what an effect, whether positive or negative, people can impose upon themselves. We begin with Anna, who sets herself up to be unhappy when she marries Alexei Alexandrovich.

She never loved him, and never felt complete with him. In19th century Russia, an uninspired marriage such as this was not uncommon.

Women are loving creatures though, and need to be loved in return. Anna’s affair with Vronsky was mere infatuation, but because love was absent from er married life, she at least wanted to feel some flame of passion. She Justifies her actions by saying, “They don’t know how [Alexei] has been stifling my life for eight years, stifling everything that was alive in me, that he never once even thought that I was a living woman who needed love” (292).

By “they’ she is referring to society, because of how they will end up shunning her for her unconventional choices.

Her point is valid, but in no way does she solve her problem in an effective way. She gets herself into this predicament with Vronsky, instead of trying to find another solution o her discontent. A clandestine affair with another man does not provide happiness, and will actually hamper any desire for fulfillment. Instead it creates guilt and regret for Anna. She does not know where to turn, and satisfying her needs on a daily basis is all that she understands. Another way to look at this is “give a man a fish and he can eat for a day. Teach a man to fish and he can eat for a lifetime. If Anna learned how to “fish” she would never go hungry again, but instead she is only concerned with eating for one day at a time. The infatuation means nothing in the scheme of er entire life, and leads to her giving up in the end because she doesn’t know how to truly fend for herself. Levin on the other hand, learns to secure a lifetime of fulfillment. Him and Anna are complete opposites in that mainly Anna is irrational and Levin is rational. He does not act on impulse, and instead of engaging in activity that could make him happy for a short amount of time, he learns what it means to find meaningful ways to make living worthwhile.

Before Levin and Kitty fell in love, he: Was envious of [the peasants’] healthy merriment; he would have liked to take part in expressing [their] Joy of life. But he could do nothing and had to lie there and look and listen. When the peasants and their song had vanished form his sight and hearing, a heavy feeling of anguish at his loneliness, his bodily idleness, his hostility to this world, came over him. This makes the reader empathize with his current dilemma, and his inability to tind anything to give his lite a sense ot wholeness.

H loneliness is the chief impediment to his happiness. He was wrong in believing that he could get over Kitty (when she denied him at first) and instead find solitude and happiness in the simplicity of life as a farmer. When Levin saw Kittys carriage go by and their eyes met, he realized “there was no other being in the world capable of concentrating for him all the light and meaning of life. It was she. It was Kitty’. This is a turning point for Levin, because he now has something to live for, a love to hope for to get him through the day.

This novel shows how love can bring purpose and meaning to someone’s life, and save it from monotony and loneliness from which we as humans try so hard to stray. Later, when he and Kitty finally pronounce their love to each other, their worlds turn upside down, and every word exchanged etween them from then on is uttered with compassion. Levin says, “here was a plea for forgiveness, and trust in him, and a caress, a tender, timid caress, and a promise, and hope, and love for him, in which he could not but believe and which choked him with happiness”.

To the reader, this is so exciting because after spending so much of his life trying to find what will make him happy, he finally has a sense of greater care towards and understanding of another person. When one observes the love Kitty and Levin have found, it is impossible not to compare it to that supposed love” of Vronsky and Anna. One wonders if Vronsky is actually holding her back from discovering what is important in her life by keeping her in this tangled web of infatuation, where she is fooled into believin she can someday be happy with him.

Instead, Anna is satisfied for days at a time, but is never completely fulfilled, and finds herself always wanting more. In the later parts of their affair, “even the rare moments of tenderness that occurred between them did not bring her peace: in his tenderness she now saw a tinge of tranquility, of assurance, which had not been here before and which irritated her”. This shows how the momentary pleasure that the affair gave her, will, in the end, not sustain her for a lasting peace.

Anna does not think carefully about her mental well being very often, which in turn, allows her to drift toward suicide. Every time she remembers the horrible circumstance she has put herself in, she becomes more and more depressed, and blames it on Vronsky. “She blamed him for everything that was difficult in her situation”. She cannot understand what she needs, and putting the blame on someone other than herself ives her comfort that she is not the cause of her unhappiness. Anna’s desperation makes Levin appear as though he has everything fgured out.

While she gives into her desires, Levin carefully restrains himself in order to discover true happiness. He has obtained love for another, and the next chapter in his life is the pursuit of spirituality. He struggles internally with the concept of faith, and for whom, if there is anyone higher than us, should we live? He has a fascination with the meaning of life, to which Kitty cannot help him with or explain, and “he lived, not nowing and not seeing any possibility of knowing what he was and why he was living in the world, tormented by this ignorance to such a degree that he feared suicide”.

One sees how much this bothers him, and it seems he will not be able to find peace without knowing what he is doing on this earth. One could see this hunger for the meaning of life, the need for something more in life as what actually stops him from considering suicide. While rationality and curiosity stopped Levin trom killing himselt, Anna gave up on whether or not there is more meaning to lite. She was sick of trying to maintain happiness.

In her last moments, “the candle by the light of which she had been reading that book filled with anxieties, deceptions, grief and evil, flared up brighter than ever, lit up for her all that had once been darkness, sputtered, grew dim, and went out forever”. This is to say, everything that had been tormenting her finally vanished with her death. She would never have to suffer through life again, and her suicide demonstrates a way to eliminate pain, while Levin does instead through contemplation. Anna and Levin were connected in that they did ot know the next step to take in their lives, and Anna chose the easy quickest way out.

The novel instead ends with Levin’s new state of awareness and acceptance of the self, instead of Anna’s rejection of it. He says to conclude the story: “my life now, my whole life, regardless of all that may happen to me… is not only not meaningless, as it was before, but has the unquestionable meaning of the good which is in my power to put into it”. Levin grasps his ability to live life with purpose, and he now knows that he cannot expect good things to come his way, but must seek them out himself.

By ending the novel with the story of the character who ends up happy implies that Tolstoy wanted to show the reader that Levin was right all along and Anna was wrong. The moral that can be deduced is that if someone tries to fulfill themselves solely with earthly pleasures, they will end up broken, while finding satisfaction in spirituality and emotional healthiness will keep them strong. It is necessary not to rely on others to create happiness, because people will let each other down, but if an individual’s spirit is strong and resilient, they can recover from life’s disappointments.

Anna Karenina in Pursuit of Happiness. (2018, Nov 03). Retrieved from http://studymoose.com/anna-karenina-in-pursuit-of-happiness-essay 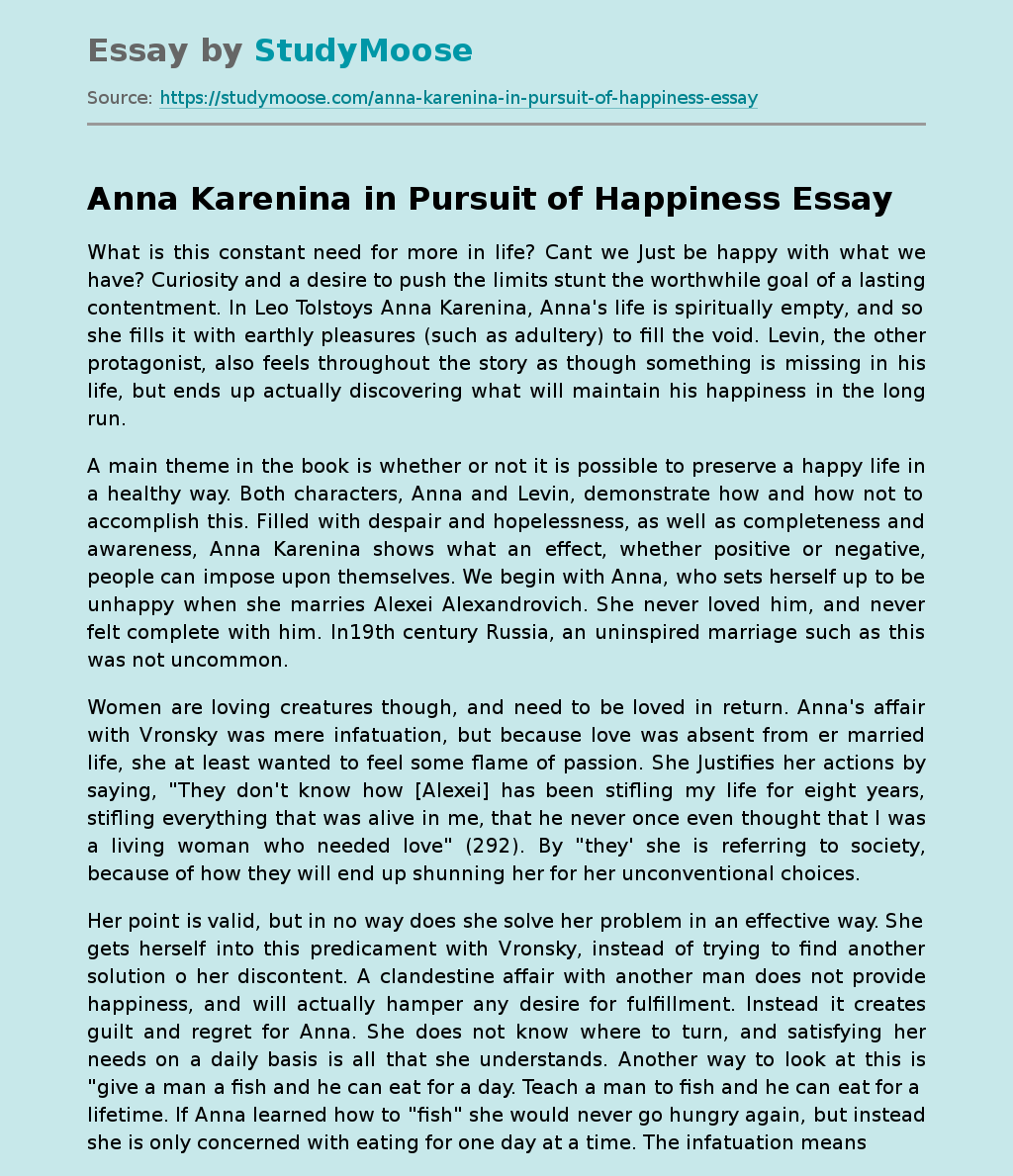