Religion, considered as the essence of human spirituality and morality, has been an integral part of life throughout the course of history. It has been an efficacious presence in innumerable works of literature, poetry, and art. For this reason, it is of little wonder that we find the religious theme (or issue? ) intricately explored in Tolstoy’s Anna Karenina and Flaubert’s Madame Bovary.

In essence, these 19th century masterpieces are considered as outstanding examples of Realist literature, and their authors, along with their precise and realistic depictions, intertwine a subtle, but significant sense of religious influence to heighten theme and characterisation.

Don't use plagiarized sources. Get your custom essay on
“ Religion in Tolstoy’s Anna Karenina and Flaubert’;s Madame Bovary ”
Get custom paper
NEW! smart matching with writer

And lastly, it is elemental in the final destruction of both tragic heroines. Flaubert and Tolstoy masterfully entwine the element of religion, and subsequently its role in society by using several characters to embody particular societal religious viewpoints.

Flaubert portrays – rather scornfully- the decay of religious values in middle-class French society through the introduction of two characters: Homais and Father Bournisien.

Homais considers himself the intellectual of Yonville, and with his irreligious views, he typifies the middle-class mentality of his time and its sciolistic attitudes: “My God is the God of Socrates, of Franklin, Voltaire and Bi??ranger! (Flaubert 61) In this respect, Flaubert portrays him as a fool whose true faith lies only in materialistic pursuits which he integuments with the progressive-sounding jargon of scientific ideas, yet remains blind to the entire concept of religion and its values.

Father Bournisien, on the other hand, is an oblivious, one-dimensional representation of middle-class religion who fails to tend to the needs of his parishioners.

In light of Emma’s desperate pleas for help, the onerous priest interrupts with absurd statements: “Only this morning, I had to go over to Bas-Diauville about a cow that was bloated; they thought it was bewitched. (Flaubert 90) Bournisien serves to represent the progressive atrophy of Christian values and ideals in a small bourgeoisie provincial setting. Tolstoy cleverly uses the characters of Karenin and Countess Lydia to illustrate a similar idea. Countess Lydia, an illustrative manifestation of decadent Russian aristocracy, has pretensions to be an intellectual; however, she is shallow and strives only to be fashionable and popular. In this context, she closely resembles Homais.

She adopts the “new interpretation of Christian doctrine that had been spreading lately in Petersburg” (Tolstoy 546) and uses it to conform the nai??ve Karenin to her wishes and beliefs. Countess Lydia’s fai??ade of an emotional, fashionable religion, much like her persona, is as inane as it is praetorian. Karenin patently represents the banality and hollowness of high Russian aristocratic religious morals. He strives to maintain his Christian rectitude, attempting to be forgiving to Anna, but utterly fails in doing so due of his pride and ambition.

Though he senses the hypocrisy of the ecstatic religious posture imparted to him by Countess Lydia, he assumes it nevertheless to save face and solace himself: “he [Karenin] clung to his pseudosalvation as though it were his salvation. ” (Tolstoy 547) In the end, Karenin, along with Tolstoy’s Russian aristocracy, are left pathetically broken as well as spiritually and religiously impoverished. Evidently, both writers underscore the corruption, opprobrium and debasement of religion in their societies through their meticulously crafted characters.

Upon analyzing the debacle of the two tragic heroines, Anna Karenina and Emma Bovary, it is impossible to dismiss the immense religious symbolism, allusion, and foreshadowing surrounding these culminating events. It is noteworthy that somewhere midway through their respective novels, Tolstoy and Flaubert outline the crux of their heroines’ path to destruction in a remarkably similar manner. Both authors incorporate a period of religious fervour whereby the female protagonist succumbs to a grave illness and undergoes a near-death experience, after which her doom becomes inevitable.

In Tolstoy’s work, the seemingly moribund Anna is in a state a great throe and pleads for an end to her suffering (through death): “Oh God! Oh God! When will it all be over? ” (Tolstoy 442) Obviously, Anna lives, so why does God refuse to let her die? Apparently, Anna has not yet fully paid for her sins, and thus will be condemned to prolong her life in gloom until she is ready for death. In the case of Emma Bovary, Flaubert depicts his sickly protagonist in a state of great despair (after Rodolphe abandons her) who asks for Communion and subsequently undergoes a seemingly poignant, albeit brief, religious reawakening.

Initially, it appears that Emma’s return to God is genuine: “another life was beginning; to her it seemed that her soul, rising towards God, would be annihilated in His love. ” (Flaubert 172) It is soon apparent, however, that Emma’s religious ‘recovery’ is merely another means of escaping reality to welter in her egomaniacal and libidinous pleasures: “she called upon her Lord in the same sweet words she had once murmured to her lover, in the raptures of adultery. ” (Flaubert 173) Religious conduct quickly becomes irritating to Emma, and it soon loses her interest.

As her health improves, her religious values seem to decay accordingly, and it is obvious that her amoral attitude will remain adamant for as long as she lives; this is a powerful indication that Emma is fatally flawed, for in her next period of illness, there would be no recovery. In the gripping moments that precede Emma’s death, she desperately turns to religion yet again. Although this seems to provide her provisional comfort and peace of mind, it is ultimately futile, as it is outwardly obvious that Emma’s views on religion have remained unchanged.

This scene is strongly reminiscent of Emma’s near-death experience and Flaubert’s masterful technique of parallelism becomes evident here. Much like Emma’s prior religious ‘illumination’, this passage is adorned with rich word imagery and powerful sensual symbolism. For instance, as the priest displays the crucifix to Emma, she “stretched forth her neck like one in thirst, and, pressing her lips to the body of the Man-God, she laid upon him with all her ebbing strength the greatest loving kiss she had ever given. (Flaubert 265) As before, the intent of Emma’s final religious episode was not one of spiritual and moral recovery, but to rekindle her licentious pleasures for one last time. Finally, as the priest attempts to offer Emma a consecrated candle, the “symbol of the celestial glories that were soon to surround her,” (Flaubert 265) she is unable to grasp it in her hands, symbolizing that religious redemption is hopelessly beyond her reach. Likewise, it is obvious that a strong religious connection exists throughout the gripping scene of Anna’s death.

As her life comes to a tragic conclusion, the reader is instantly reminded by the famous epigraph of Anna Karenina, alluding to the Bible’s Romans 12:19, “Vengeance is Mine; I will repay, saith the Lord. ” Not only does this serve to foreshadow Anna’s ultimate destruction, but it also provides insight into its cause. As Anna is struck by the train, her final words leave a lasting impression on the reader: “Lord, forgive me for everything! ” (Tolstoy 816) This is suggestive of Anna’s testament to her connate sense of guilt and a final attempt at repentance.

It is also interesting to note that Tolstoy seems to prefer the usage of simple, direct syntax, rather than Flaubert’s eloquently artistic style to convey meaning. The epigraph and her plea for forgiveness likely indicate that the harmful consequences of Anna’s lecherous actions and violations of Christian morals are inexcusable in the eyes of God, and demand her death. By assessing the impact that religion has on the principal characters of both works, we can see how both authors communicate a thematic message.

First of all, with respect to the scene with Emma as a young girl in the convent, Flaubert makes it evident that Emma’s isolation from the real world left her exposed to religious sentiment without strict discipline. She is therefore left to create romantic, sentimental daydreams with little bounds: “The metaphors of the betrothed, the spouse, the celestial lover and the eternal marriage, such as recur in sermons, excited a strange sweetness deep in her souls. (Flaubert 27) This askew misinterpretation of life, love, and religion is destined only to have disastrous consequences, and thus Flaubert effectively illustrates the dangers of emotionalism and sentimentalism in religious education for young middle-class children such as Emma. Tolstoy, on the other hand, instils his moral viewpoints in Levin to outline the enriching effects that one can experience through religious devotion and understanding. The melancholy Levin is agnostic at the beginning of the novel and finds himself questioning his own existence and spirituality.

The turmoil he experiences on his journey of spirituality and self-discovery enables him to undergo an epiphany in the end through which he finally finds faith: “the understanding of goodness that has been revealed to me by Christianity and can always be verified in my soul. ” (Tolstoy 867) As Tolstoy has obviously mirrored himself in Levin, his viewpoints on religion and spirituality become evident through Levin’s perspicacity. He believes firmly that an individual can only achieve happiness and completeness through a spiritual struggle in which the soul itself is sanctified and expiated.

Madame Bovary and Anna Karenina are considered as outstanding examples of Realist literature, Flaubert and Tolstoy, successfully, intertwine a subtle, but significant sense of religious influence to heighten theme and characterisation. Despite the different contexts under which these two novels were written, one must appreciate the significant incorporation of religion and the extent to which it aids in character development. These two women, Anna and Emma, are an epitome of the misunderstanding of the morals and to a further extent the corruptible standards that now embrace Sirituality. I’m not sure if this makes any sense) The theme of religion is a powerful one, and its impact on classic Realist works such as Madame Bovary and Anna Karenina knows no confines.

Alex I don’t know what the fuck to do here. I’m a bit under-qualified, I think, to revise your conclusion. I did my best but I don’t really know what the book is about. Any conclusions I make will be most likely off topic. Now, Is what I have underlined your thesis? If it isn’t then place your restated thesis there. Then somewhere after the second sentence in your conclusion, make a conclusion about the two main characters, the Bovary bitch and Karenina Kaqisinher.

Say something about how they fucked up in a spiritual sense (I put something in but I don’t know if its any good). Then top it off with – ta da – “A truism emerges, fated are those who wear their spirituality on their sleeve and embellished it with meaninglessness to be blighted by their ignorance. ” I’m just fucking with you. This has to be as bad of a piece of bull shit as I could have ever hoped to rip out of my ass. You probably shouldn’t use it because I most likely doesn’t make much sense. See, I really don’t know what the fuck I’m talking about. That’s about all I can do!! 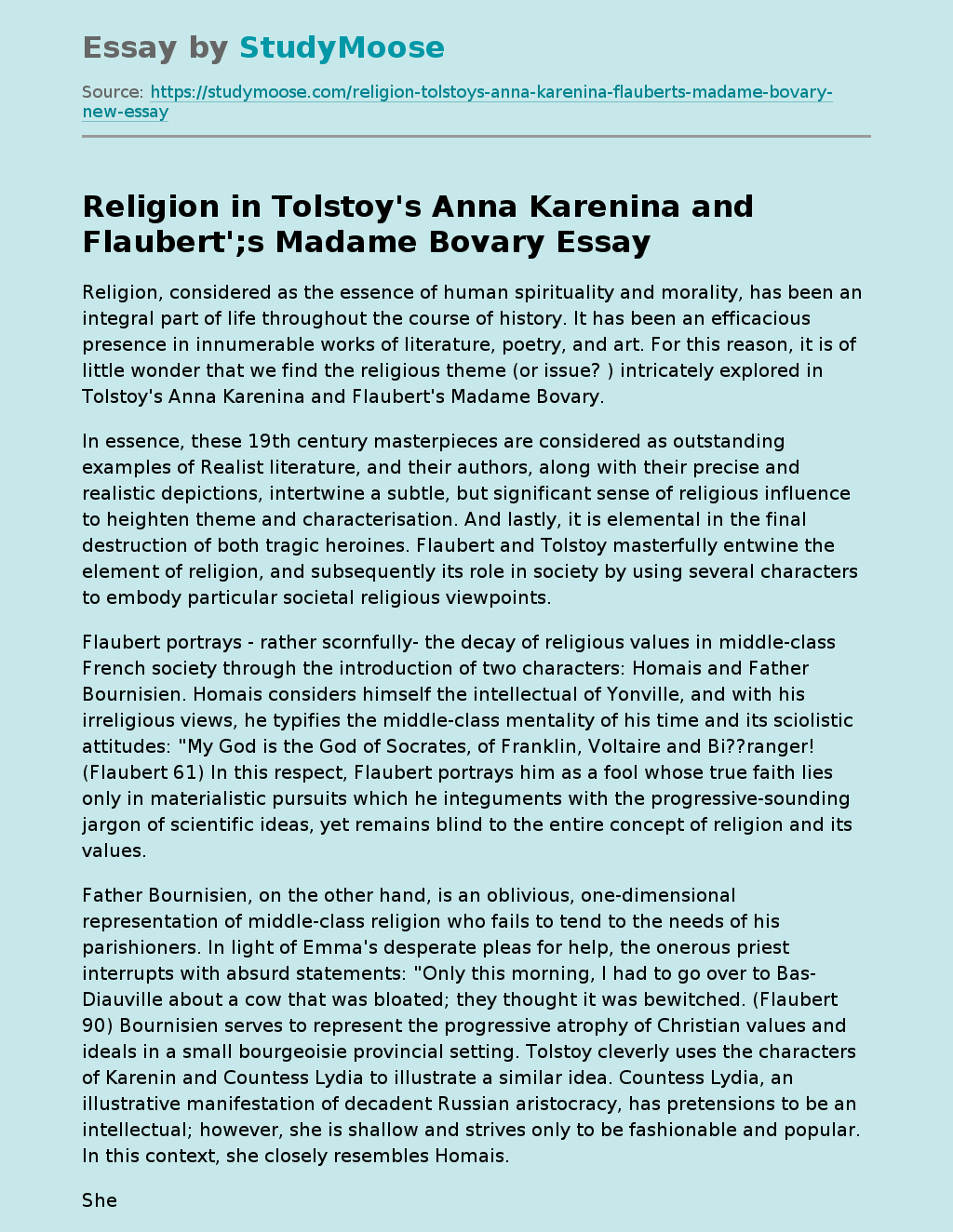