A review of Tolstoy’s “Anna Karenina”, focusing on the characters in the life novel

Anna Karenina By examining the character list, one immediately notices the value Tolstoy places on character. With one hundred and forty named characters and several other unnamed characters, Tolstoy places his central focus in Anna Karenina on the characters. He uses their actions and behavior to develop the plot and exemplify the major themes of the novel. In contrast to Flaubert’s Madame Bovary, Tolstoy wishes to examine life as it really is.

Don't use plagiarized sources. Get your custom essay on
“ Analysis of Anna Karenina and Vronsky Characters ”
Get custom paper
NEW! smart matching with writer

Both novels have relationships and adultery as a central theme.

However, Tolstoy gives us a much more lifelike representation in Anna Karenina by creating characters, both major and minor, that contribute to the sense of realism.

The most striking feature of Tolstoy’s minor characters is that although they may only appear briefly, they still possess a sense of lifelikeness. When a character is introduced, Tolstoy provides the reader with details of the characters appearance and actions that give a sense of realism. For example, the waiter that Stiva and Levin encounter at their dinner, although a flat character is definitely presented in a manner which allows him to have a sense of lifelikeness and fullness.

From the speech patterns the waiter uses to the description of the fit of his uniform, one is presented with the details that allow the waiter to contribute to the novel in means beyond simply the presence of a minor character. His description and actions provide the novel with a sense of “real life”.

Another way in which Tolstoy gives the minor character a sense of life is by making them unpredictable. One sees this in the character of Ryabinin.

When initially discussed, the reader is told that upon conclusion of business, Ryabinin will always say “positively and finally” (p161). However upon conclusion of the sale of the land, Ryabinin does not use his usual tag. 2 This tag would normally be characteristic of the flat, minor character such as Ryabinin. However, Tolstoy wishes to add to the lifelikeness of even his minor characters and allows them to behave as one would expect only major, round characters. The detail Tolstoy gives to all of his characters, including the minor characters, contributes to the realism of both the novel and the characters. Perhaps the most realistic of Tolstoy’s major characters is Konstantin Levin. Throughout the novel, the reader witnesses the trials of Levin’s life and his response to them. Unlike Flaubert, Tolstoy reveals Levin in a manner which gives him a sense of roundedness and lifelikeness.

On his quest for meaning in his life, Levin is essentially a realist, just as Tolstoy wishes to be in writing Anna Karenina. We first encounter Levin when he arrives in Moscow to propose to Kitty Shtcherbatsky. When Kitty refuses his proposal, Levin has been defeated in the first step he feels is necessary for personal satisfaction. After the refusal, Levin returns again to the county in hopes of finding personal satisfaction in the country life style. He turns to farming, mowing with the peasants and other such manual work to fill his time, all the while still searching for meaning in his life. This desire for meaning remains unfulfilled until he finds happiness and a sense of family happiness in his marriage to Kitty. However, even in this state of happiness, Levin must face tragedy. Soon after the marriage, Levin’s sickly brother, Nicolai Dmitrich Levin, is dying of tuberculosis and Levin must confront his death.

This death adds to Levin’s sense of the reality of life, realizing that life now not only centers on living but on not living. This event, combined with his previous search for meaning, brings Levin to the conclusion that one must live for their soul rather that for a 3 gratification through things such as marriage and family. It is this epiphany that gives Levin his sense of roundedness. Levin has grown from the beginning of the novel when his search for happiness was centered on personal fulfillment through marriage. By the conclusion of the novel Levin has reached a sense of personal satisfaction as well as personal salvation through his realization that love not only entails physical love, as that for his wife, but also in a love of God and living for God. In contrast to the growth that Levin experiences is the stagnation of the life of the title character Anna Karenina. At the beginning of the novel, the married Anna is confronted with a new suitor, Count Alexy Kirillovitch Vronsky.

At first Anna rejects Vronsky, but at the site of her husband upon return she begins to notice his whining voice and the size of his ears. This disgust at the banalities her husband sets her up for the pursuit and eventual downfall of her relationship with Vronsky. Anna begins her search for fulfillment in her affair with Vronsky with a sense of “all for love”, just as Levin had begun his pursuit for happiness in a relationship with Kitty.

However, the striking difference in the two characters comes in the fact that Anna never moves beyond the idea of fulfillment through the physical satisfaction of love. Because Anna’s husband, Alexy Alexandrovitch Karenin, cannot satisfy the ideal of love that Anna has set for herself, she must turn elsewhere for the satisfaction that she feels will provide her with a sense of personal fulfillment. For this fulfillment she turns to Vronsky, who she feels because of status can provide the physical fulfillment that she so desires.

Ironically, it is the things that draw Anna to Vronsky that eventually lead to the downfall of their relationship and Anna’s eventual suicide. Anna was drawn to Vronsky because of the life he led. She found his carefree 4 lifestyle and military involvement to be desirable. However, at the end it is these exact things that doom the relationship. Vronsky’s political duties limit the time he spends with Anna and she begins to doubt his fidelity. The end of the relationship occurs when Vronsky must leave on business and Anna doubts his true motive for leaving. As she ponders the fight that has occurred, Anna realizes that she has now lost everything, her lover and her child, because of her distorted view that physical love could provide her with a sense of personal fulfillment. With this realization she ponders how her personal fulfillment will never be obtained and is for that reason that she commits suicide by throwing herself under a train after her final disgust with Vronsky.

Although Anna has realized the error of her “all for love” ideals, she fails to grow from the epiphany. She realizes that she will never find satisfaction in her affair with Vronsky. In fact, her affair even makes her doubt that love, whether it leads to satisfaction or not, is possible. It is her love for Vronsky that has driven her to hate the love that she so much desired. She has not grown to hate Vronsky but rather the love that she has for Vronsky. Anna’s response to this epiphany draws the distinction between her and Levin. Both Anna and Levin have reached that same conclusion about the fulfillment that they can derive from love. However, Anna fails to react in a productive manner. Levin is able to begin with his epiphany and grow to a higher sense of understanding of where one can derive personal fulfillment.

Another of the major characters that fails to realize and respond the faults of their thinking is Count Vronsky. As stated earlier, the initial characterization of Vronsky sets forth for the reader the limits of the actions and thinking of Vronsky. One learns from his initial 5 characterization that Vronsky is also concerned with a search for personal satisfaction. Like Anna, Vronsky feels that this satisfaction derives from physical pleasures. For Vronsky, these pleasures include such things as politics, horse racing and women. However, just as he is doomed to fail at the horse races, his entire sense of self-satisfaction is doomed to fail also.

Vronsky depends on the everyday pleasures of life to give him satisfaction with no concern as to what the final end of his satisfaction may be. Because he has no sense of the effect of his desires, for his pleasure is entirely self motivated, his affair with Anna is doomed to fail before it begins. It is his desire for self satisfaction only that limits his response to others. Although Anna sees the relationship as a way of fulfillment through love, Vronsky’s capacity in the relationship is only a sense of self-satisfaction. Because he lacks any sense of love a fulfillment he will never be able to love Anna in a way that will provide her any fulfillment. It is that sense of Vronsky’s character that makes him one of the most limited characters in the novel.

Both Anna and Levin are able to respond to the events with a sense of realization of the errors of their original thinking. Vronsky never realizes that there is a flaw in his thinking. In Levin, Anna and Vronsky, the reader is presented with the realities of each of the characters search for meaning in their life. The manner in which each of the characters search is both alike and different at the same time contributes to the readers sense of realism about the novel.

In three characters, Tolstoy gives one a range of human behaviors in response to the same situation. It is this contrast of the three characters that allows Tolstoy to take full command of the life novel. He achieves a sense of real life in all of his characters. Although the reader may wish to, and can , draw distinctions in Tolstoy’s characters such 6 as a major or minor character that is either flat or round, the central focus of the character should be the contribution that they make to the reality of the novel. Although one can classify each of the characters in Anna Karenina as a major, minor, flat or round character, Tolstoy presents each of his characters, whether they be major minor flat or round, so as to convey a sense of reality and lifelikeness in his novel. 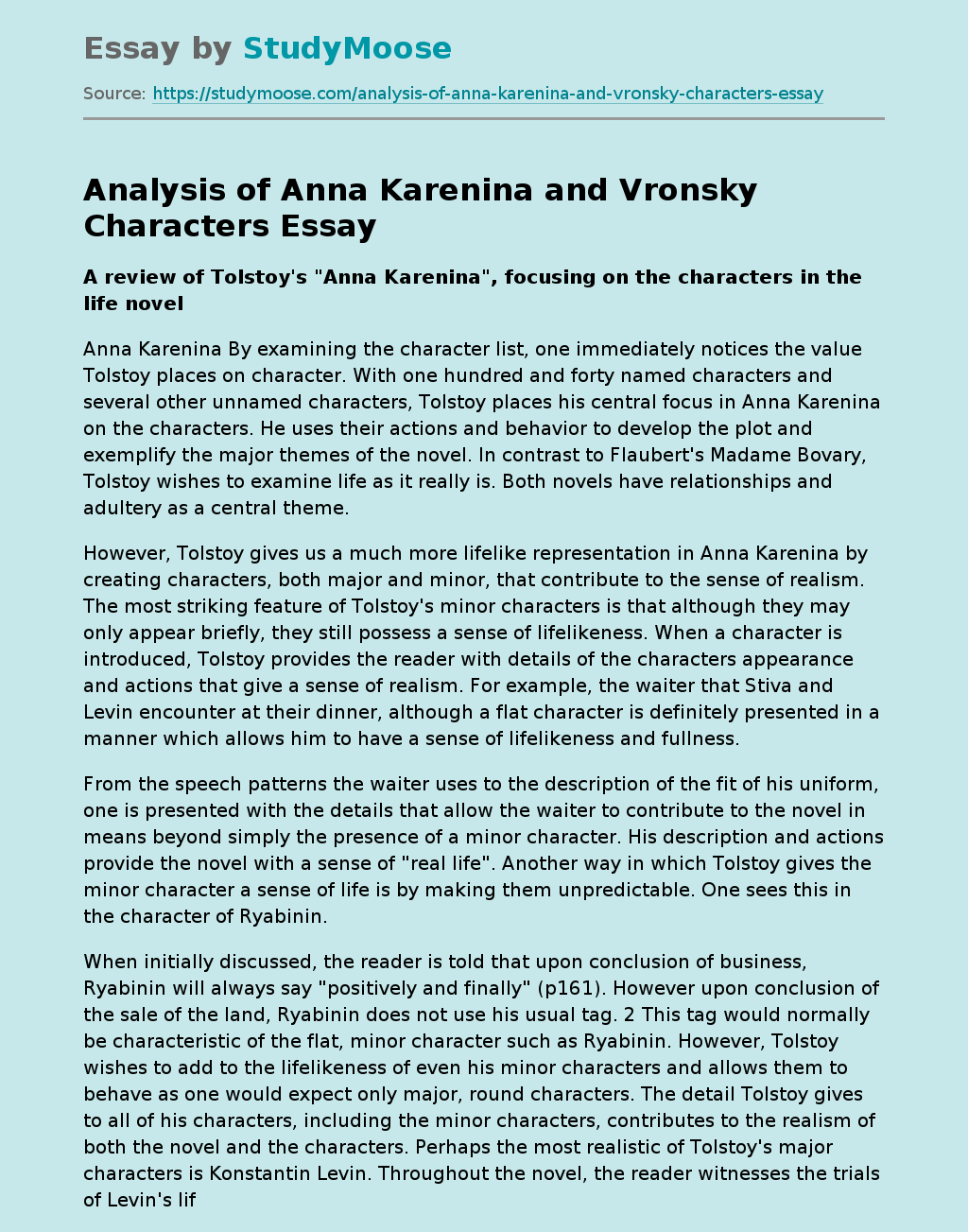