A Pursuit of Happiness a Movie Review

The Pursuit of Happiness is a movie about a struggling salesperson who takes custody of his son, as he is ready to begin a life-changing experience. The movie stars Will Smith, with co-stars Jaden Smith, Thandie Newton, Brian Howe, Kurt Fuller, and James Karen, among many others. Will Smith, who plays Chris Gardner, is a great man deep down and just wants to do right, but everything just seems to be falling apart at the same time. Chris causes financial difficulties for his family by losing his current job and then has troubles with his relationship with his wife that leaves him and moves to New York.

Don't use plagiarized sources. Get your custom essay on
“ A Pursuit of Happiness a Movie Review ”
Get custom paper
NEW! smart matching with writer

Without money and wife, Chris is totally committed to his son Christopher. Will Smith portrays Chris Gardner, a character who has strong wisdom as a single father and desperately wants to do right without complaints and his only hope is drifting away when everything meaningful falls apart at the same time leaving Chris bruised and battered.

Financial problems, eviction, job loss, and relationship devastation with his wife left no financial support forcing him and his son to move to New York struggling relentlessly. Fighting for a stockbroker job while homeless, the competition continues against twenty other potential candidates despite a multitude of difficulties including being arrested and broke. Chris never gives up with his son during this time. Chris accepts a permanent job as a stockbroker after his training is over and becomes very emotional. Knowing they will be ok, Chris tells his son that he got a new job and that everything will be ok now and they will live a better life now.

Chris can lift the financial burden off his shoulders, start over, and move forward. Regardless of the challenges faced or the last dollar he had, Chris faced every day with potential strength and courage.

Casting of this film was outstanding thanks to Will Smith who brought Chris Gardner’s character to life as a struggling individual attempting to maximize his potential with one motivation, his son. Jaden Smith portrays Will Smith’s son in the movie and actually is his real son. Jaden understands what is going on and understands that his dad is trying so hard to do right and to give him a better life. Jaden accepts everything that has happened and really sticks by his dad and encourages him that he can do it and that he can make it. Jaden is a smart little boy and I think they grew closer together in this film and built a special bond together when making this movie.

Costume designs in this film were amazingly creative given the fact they could have wrapped this neatly in a package skillfully adorned with a red bow. Using a series of old, signs and raggedy clothing made the time in this film adjust transparently, making Gardner’s wardrobe more compelling and resilient like in the real life direction in the 1980’s. Some of the clothing Smith and his son Jaden wore in the movie was made in an effort to match with characteristics fitting homelessness and the painful turmoil associated with the close bond between father and son. Production designers created dramatic scenes using many different vehicles obtaining different views at every angle of the movie. A child like Jaden would be so motivated as to wear the same clothing voluntarily for several days considering the stench was probably quite overwhelming but this was a movie with homeless individuals so the matter was quiet.

The visual and sound effects of this film were impressive and had intensifying sound and visual scenes that were emotional, heartwarming, and remarkably outstanding and couldn’t match any other performance. This film won many awards and had eighteen nominations and various other awards including, the ASCAP Film and Television Music Award, and the best Capri Movie of the Year Award. The soundtrack to this film was put together very well and matched all aspects of this movie, the soundtrack included songs from the artist Andrea Guerra. The soundtrack reflects on helping to depict the struggles of modern life with a contribution and very minimal in volume or touching in basic fashion on the hip, urban environment of the film. The cues with an enhanced bass rhythm are the highlights of the score for this film. The Pursuit of Happiness is a story of success, somewhat like mine in relation to losing everything, struggling through life’s failures as a single parent, unemployed, broke and dependent upon no one but myself to do what it takes for my child. I may have never been homeless, but I appreciate knowing the emotional experiences and admire his strengths and determinations to survive in a city full of insecurities and overwhelming poverty. This is a necessary movie for people to see and reflect on their
own experiences. Realizing life can be changed in a blink of an eye, losing everything you have, that not everyone encounters in a lifetime. I would recommend everyone to see this film, take into consideration poverty and homelessness, and realize it is not a choice and that everyone has a story but no one will listen.

A Pursuit of Happiness a Movie Review. (2016, Apr 10). Retrieved from https://studymoose.com/a-pursuit-of-happiness-a-movie-review-essay 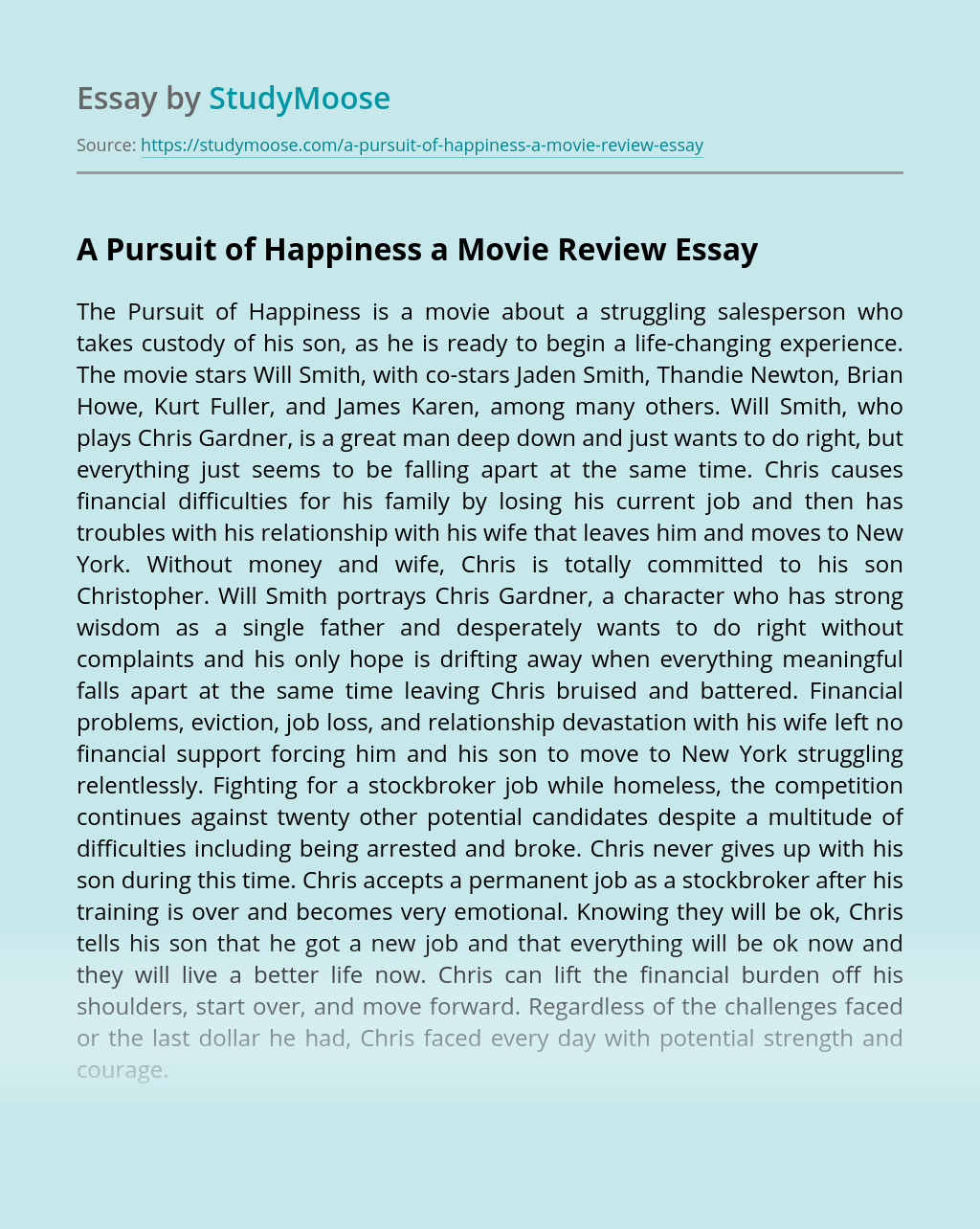