Model Summary “Computers and the Pursuit of Happiness”

In his article “Computers and the Pursuit of Happiness,” David Gelernter examines the impact of computers in the life of mankind. He addresses three questions: whether computers and the internet started a new information age, whether computers have been good for the human race, and whether they will have a positive impact in the next half century. For the first question, Gelernter’s answer is “no’ because, according to him, computers haven’t reduced our basic needs for things such as food, clothing, shelter and one another, nor has it decreased our need for physical stuff.

Don't use plagiarized sources. Get your custom essay on
“ Model Summary “Computers and the Pursuit of Happiness” ”
Get custom paper
NEW! smart matching with writer

He looks at the three arguments that people who claim that we are in a new information age make: we have new machines that can create, store and deliver information, that computer networks have conquered geography and that these are intelligent machines.

He contradicts all three claims. First, he says computers are only the latest in a series of inventions that started us in the information age in the early 20th century.

Second, mankind had already started to conquer distance through infrastructure and technology. Finally, there had been many other intelligent machines before computers such as the thermostat, the electrical system in a car, flying machines, radio, TV, electricity and so on. However, he concedes that computers have had a big impact in science and engineering since it is cheaper and more efficient to use computational models in research in those fields. Next, Gelernter addresses the question whether computers have been good for mankind. He contends that if human beings are poor or ignorant, they need more wealth and information.

In this country, most people are above the threshold of poverty and ignorance; hence, what computers bring into their life doesn’t matter much except while people are in the process of acquiring more wealth and information. Despite the wealth and information computers have generated, human happiness hasn’t increased on the whole. Although technology does change social structures, the important question is whether those new social structures are better than the old ones. Gelernter says it is impossible to compare the two because the new ones have more “machine ingredients” whereas the old ones had more “human ingredients”.

Finally, to the question whether computers will benefit human race in the next half-century, Gelernter responds by saying that computers and software are bringing in new possibilities and structures. Online schools make it possible for lessons to be presented and learned in ways that would not be possible otherwise. Although he would prefer face-to-face teaching by live teachers, he thinks due to the state of affairs in the American school system, software based teaching seems like the best hope.

Gelernter concludes the article by saying that computers may be stronger, faster and more intelligent than humans, but the uniqueness of mankind “lie beyond strength, speed and intellect” and he hopes in the future computer technology will show us how human beings can build extraordinary machines and, ultimately, how meaningless these machines are.

Model Summary “Computers and the Pursuit of Happiness”. (2016, Apr 17). Retrieved from https://studymoose.com/model-summary-computers-and-the-pursuit-of-happiness-essay 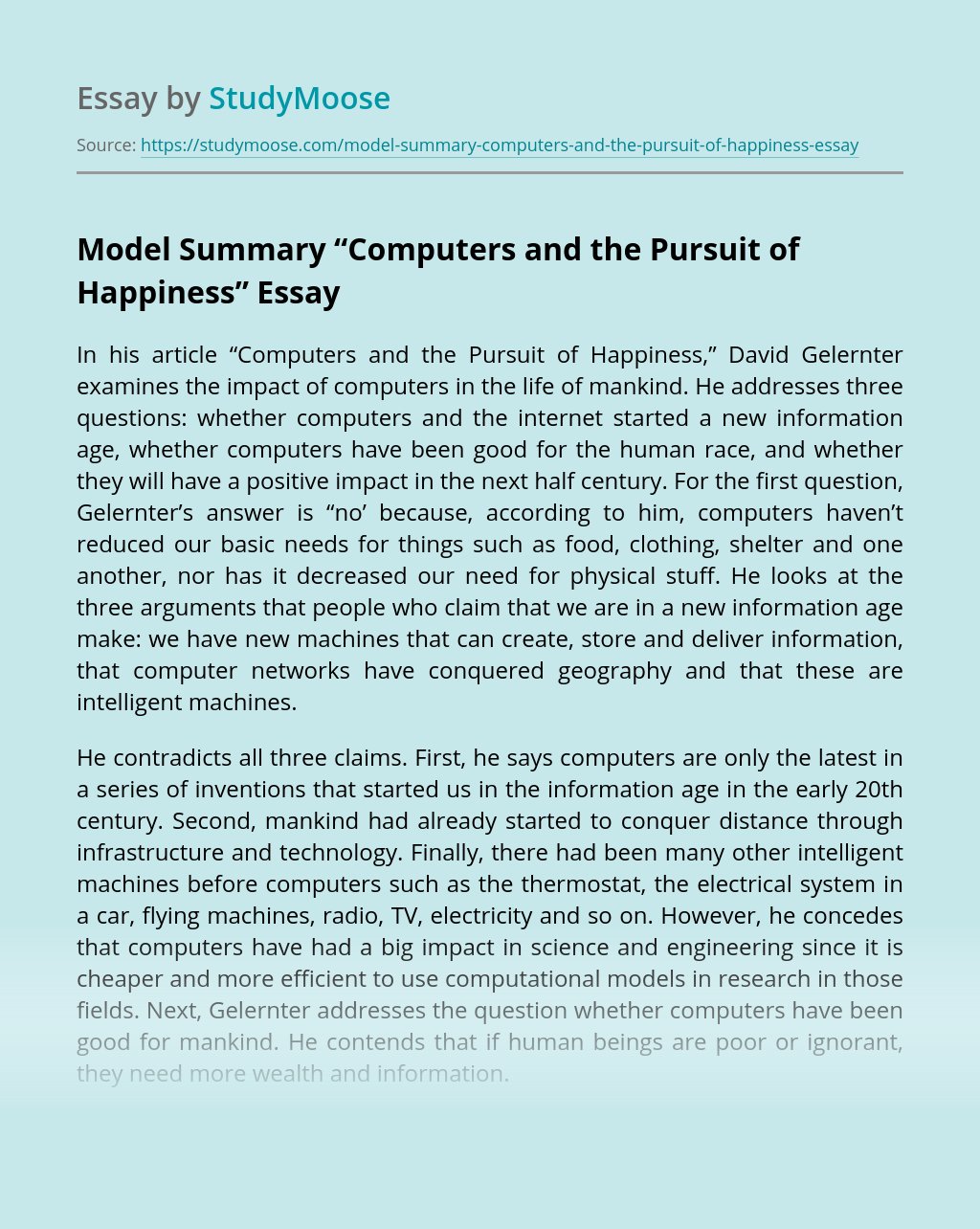