The character of Irwin in "The History Boys"

Irwin has a liberal approach to teaching. His views contrast dramatically with Hectors and this causes some conflict in the play, ‘It’s a question of tone, surely. Tact.’ (p.71) His strategy of teaching is the key to the boys success, proving his modern approach to triumph. His attempts to impress the boys subtly reflect his insecurity and this is confirmed in the scene between him and Dakin in which he ‘takes out his diary’ (p.101) just to organise a drink! However he is never presented as a comical figure and throughout the play he gains both the boys and readers respect.

Don't use plagiarized sources. Get your custom essay on
“ The character of Irwin in “The History Boys” ”
Get custom paper
NEW! smart matching with writer

1. Homosexual – Irwins fear of being compared to Hector, ‘you’ve already had to cope with one master who touches you up’ (p.100) in his liking for the boys leaves him intimidated when confronted by Dakin, ‘scared shitless’ (p.100). This scene confirms his homosexuality as he accepts Dakin’s offer. It seems ironic of Bennett that Posner confides in him about his sexuality and this scene could be interpreted as a warning from Posner to leave Dakin for him or protect his dignity and not be like Hector? Mrs Lintott also tries to convey this message to Irwin.

However Irwin always seems in denial of his sexuality and this could be due to the period, as it would not have been acceptable.

1. Relationship with Hector – They don’t see eye to eye in their teaching methods. Hectors classes are informal and he believes in preparing the boys for life as opposed to exams ‘examination papers are inappropriate’ (p.

71) whereas Irwin is all about ‘turning facts upon their heads’ and carries the headmaster’s determination to get them to Oxbridge. The accident that kills Hector instead of Irwin could resemble the fading of his teaching and the growth of Irwins. Hector warns him about touching Dakin, ‘don’t touch him. He’ll think you’re a fool,’ Irwin learns from Hectors mistakes in this area. Their sexuality is a connection between these otherwise contrasting characters and seems the only thing that finally brings them together. However they both deal with it differently, Hector openly displaying his yearning on the motorbike, whereas Irwin tries to hide his true feelings.

1. Irwin’s Darker side – He uses the “shock tactics” he used with the boys in his television programmes- such as “Shit lives”; he recommends an”amused tolerance” towards cameras, implying that he thinks highly of himself . Irwin shows that he can fool people as he clearly does to “electorates” in his job in the government-advising MPs how to sell a nasty bill that would restrict trial by jury. Irwin recognises the fact (with contentment) that His type of teaching is the future and Hectors is dying. Irwin seems to feel satisfied by thinking “that there is no time for his (Hectors) kind of teaching anymore” (p. 109) this perhaps reflects on how Irwin feels about his own teaching style; Irwin is presented as being cynical, especially towards Hector throughout the play. Irwin is constantly encouraging the boys to lie- “Lying’s good isn’t it?”(p.99) this gives the impression that he is a liar and maybe slightly manipulative.

The character of Irwin in "The History Boys". (2020, Jun 01). Retrieved from https://studymoose.com/character-irwin-history-boys-new-essay 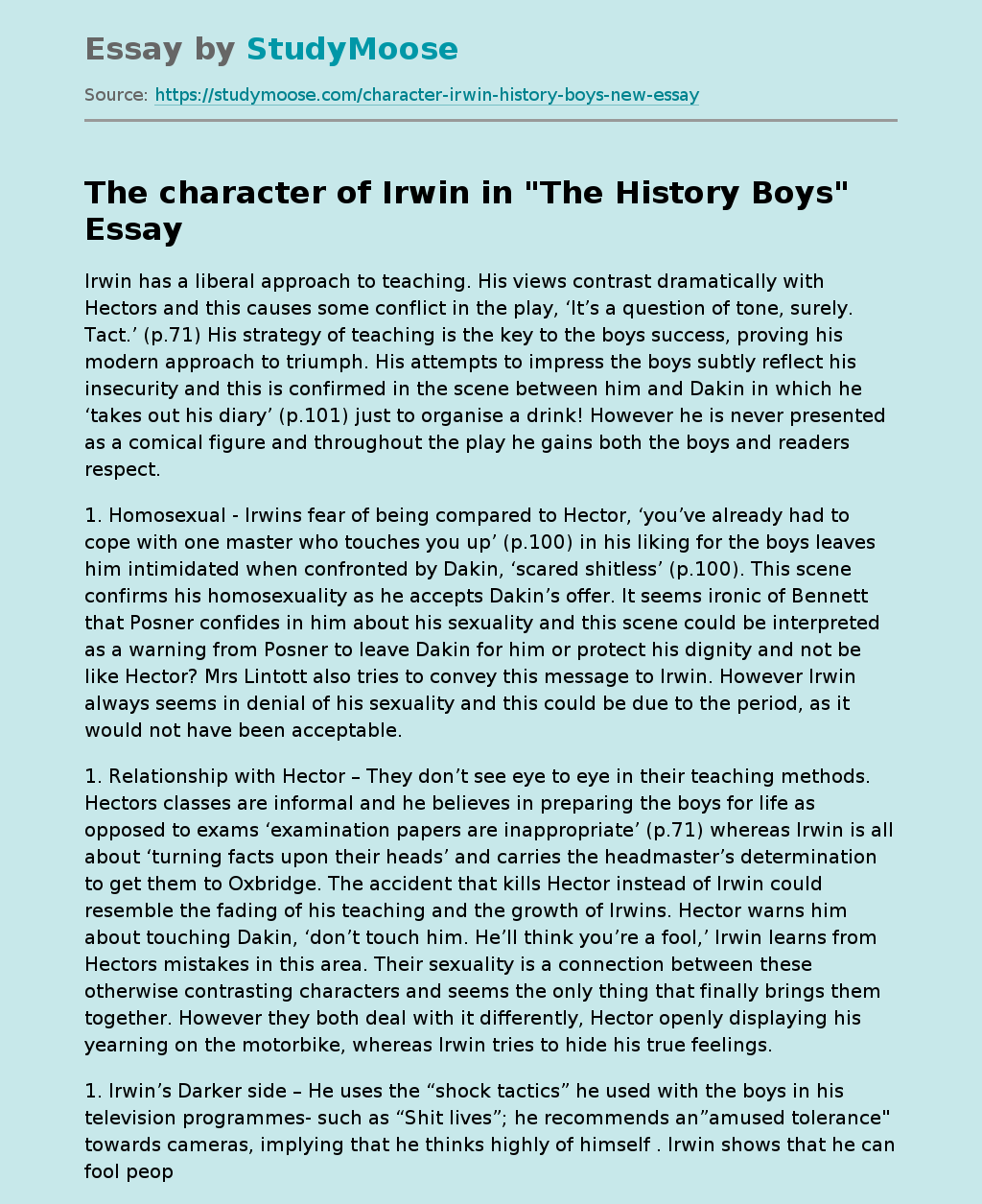