In the 21st century, with the improvements in technology and science new concepts are integrated in our lives. Cyber crime is among those concepts that did not previously exist 15-20 years ago. Back In the old day’s only conventional crime was discussed, which refers to those traditional, illegal behaviors that most people think of as crime. In today’s one has to be careful not only against conventional crime but also cyber crime as it is the latest and the most complicated problem in the new century.

Don't use plagiarized sources.
Get Your Custom Essay on Cyber crime Just from $13,9/Page

Cyber crime consists of all criminal actions against communication devices in a network such as Internet, telephone lines or mobile networks. Cyber crime can be observed among people at various age groups as it is easier to commit compared to other types of crime like murder, kidnapping or human trafficking. According to, (Cybercrime.gov, 2009,para8) can divide cyber criminals into four groups. This division may be classified under what they have in their mind.

These groups are, children and adolescents between the age group of 6 – 18 years, organized hackers, professional hackers, crackers and discontented employees.

Cyber crimes can be divided into 11 groups and each of them is different. Those are unauthorized access to computer systems or networks (hacking), theft of information contained in electronic form, email bombing, data diddling, salami attacks, denial of service attack, virus and worm attacks, logic bombs, Trojan attacks, internet time thefts and web jacking. International estimates announce that cybercrime costs approximately $50 billion annually. Cyber crime costs the United States more than $5 billion per year. According to Michigan State University Library, in England, cybercrime is estimated to cost approximately 250 million pounds or $417.7 million annually. Looking at these figures it can be said that cyber crime is a concept that should be reviewed carefully taking different aspects of it into consideration like the causes, victims and statutory provisions. Still there are so many countries that have not updated their laws against cyber crime. The lack of strong regulations makes it nearly impossible to arrest cyber criminals in those countries.

In order to diminish cyber crime all organizations and governments should cooperate, as it has no boundaries. Firstly, it is important to know why people commit cyber crime and what they have in their minds, as it is not possible to resolve a problem without knowing its real cause. According to(Cybercrime.gov, 2009,para8) Children and adolescents between the age group of 6 – 18 years are committing cyber crimes because of exploring new things, curiosity and to be outstanding amongst other children in their group. Younger people are more motivated to learn and try new ideas, which make them bolder. As they also have less life experience they are more prone to cyber crime. Another group consists of organized hackers who are the most dangerous ones. They are organized and ordered properly to make a move. According to the analysis conducted by the institute for security technology studies at Dartmouth college, the reason is generally political and these hackers may deface electronic information sites all over the world to spread disinformation and propaganda. Pakistani hackers can be given as an example who are the most skilled and qualified hackers in the world. Their main target is the Indian government sites but also NASA and Microsoft sites are also being attacked by them often. The third group is made up of professional hackers, who are only after money. They crack or steal information for their customers.

Generally competitor companies hire them to get information about their rivals. The final group consists of discontented employees, which includes people who have been fired from their job and want to take revenge from their employers. As a result it can be stated that the authorities should approach cyber crime from various angles as each criminal group has different motives. The victim of crime is another aspect that has critical importance as the impacts of cyber crime and the damage it creates depends on the target subject. Although authorities in developing countries do not agree with this argument and pay no attention to the issue, by taking customized precautions to protect specific victim group’s cyber crime can be avoided before it takes place. This shows that only developing countries give importance to the matter, which makes the problem more serious. The classification of subjects of cyber crime is as follows: individuals, organizations, society at large and nations.

At the individual level cyber crime can be against a person or personal property. According to(Cybercrime.gov, 2009,para9), this can take several forms as harassment via e-mails, cheating & fraud, defamation, transmitting viruses, IPR crimes etc…For example to protect individuals more secure operating systems can be used instead of stand-alone anti-virus programs. As operating systems are not secure enough to provide protection against cyber attacks people have to pay for anti-virus programs. When organizations are taken into consideration firms, companies, foundations or even governments can be the victims. The most common methods are unauthorized control/access over computer system, possession of unauthorized information, distribution of pirated software and cyber terrorism against a government organization. Organization wide trainings can be a solution for companies or institutions as people tend to be more precautious when they know about the potential threats and fear from losing their jobs. Some government organizations and private companies in developed countries use training as a tool to stop cyber crime. The most signification damage is given to the society at large as more people are affected by the results of cyber crime.

Pornography is one significant example, which may take several forms including child harassment. Uncontrolled websites with harmful material have negative impact on young people and especially adolescents who are easily brainwashed. This affects moral values of the society, increases the rate of conventional crime and creates an insecure environment for people. Trafficking is another example of cyber crime where masses can feel the damage.

Materials that cannot be explicitly sold by other means are traded on the Internet, which can include illegal items. Financial crimes, forgery and online gambling are other examples of cyber crime that have impacts both on individuals and the general public. Authorities should carefully examine these different groups, which are open to cyber crime and take measures specifically to protect them. Considering all the negative impacts it is becoming necessary to enforce legal sanctions on people or organizations that commit cyber crime. The most important step is to adopt legislations that define cyber crime, regulate and control the activities in cyber world in an effective way. Although certain governments do not view the problem seriously, developed countries like the U.S. have established mechanisms like Computer Crime and International Property Section (http://www.cybercrime.gov/) to take fast action against cyber crime.

The Model Law on Electronic Commerce adopted by the United Nations Commission on Trade Law is an example to statutory provisions, which was followed by the Information Technology Act. The Information Technology Act deals with various types of cyber crimes like unauthorized downloading, virus attacks, disruption, denial of access, interference with the service availed by a person, hacking and tampering with computer source documents. According to the Information Technology Act, the measures against cyber crime may include imprisonment up to 2-3 years to 10 years. According to(Cybercrime.gov, 2009,para3), the following are criticisms against Information Technology Act (ITA). First of all, the ITA does not serve the desired purpose and only deals with e-commerce. Additionally it does not deal with issues like cyber harassment, cyber nuisance etc which can have harmful effects. Another weakness of the ITA is that it is not comprehensive or exhaustive at the same time the definitions are not clear enough. There should be a uniform law in the world against cyber crime it is a worldwide issue. Along with other issues, universal jurisdiction is also a very important aspect of the problem as cyber crime is a universal concept.

Turkish people are not willing to use internet banking because they are afraid of fraud. As Turkish laws are not effective enough these problems are not resolved. Instead of dealing with these serious issues Turkish authorities put a ban on websites like Youtube. In order to avoid cyber crime relevant legal measures should be taken through international cooperation. It is also important to build a control mechanism and develop a uniform law against it. Although it is not possible to totally stop cyber crime there are steps that can be taken by countries and international organizations like the United Nations. Another important thing is to educate people about the cyber risks and tell them what their rights are. If people are informed about the actions they can take against cyber crime the problem can be solved. To reduce the level of cyber crime it is necessary to have a
strong legal mechanism worldwide. 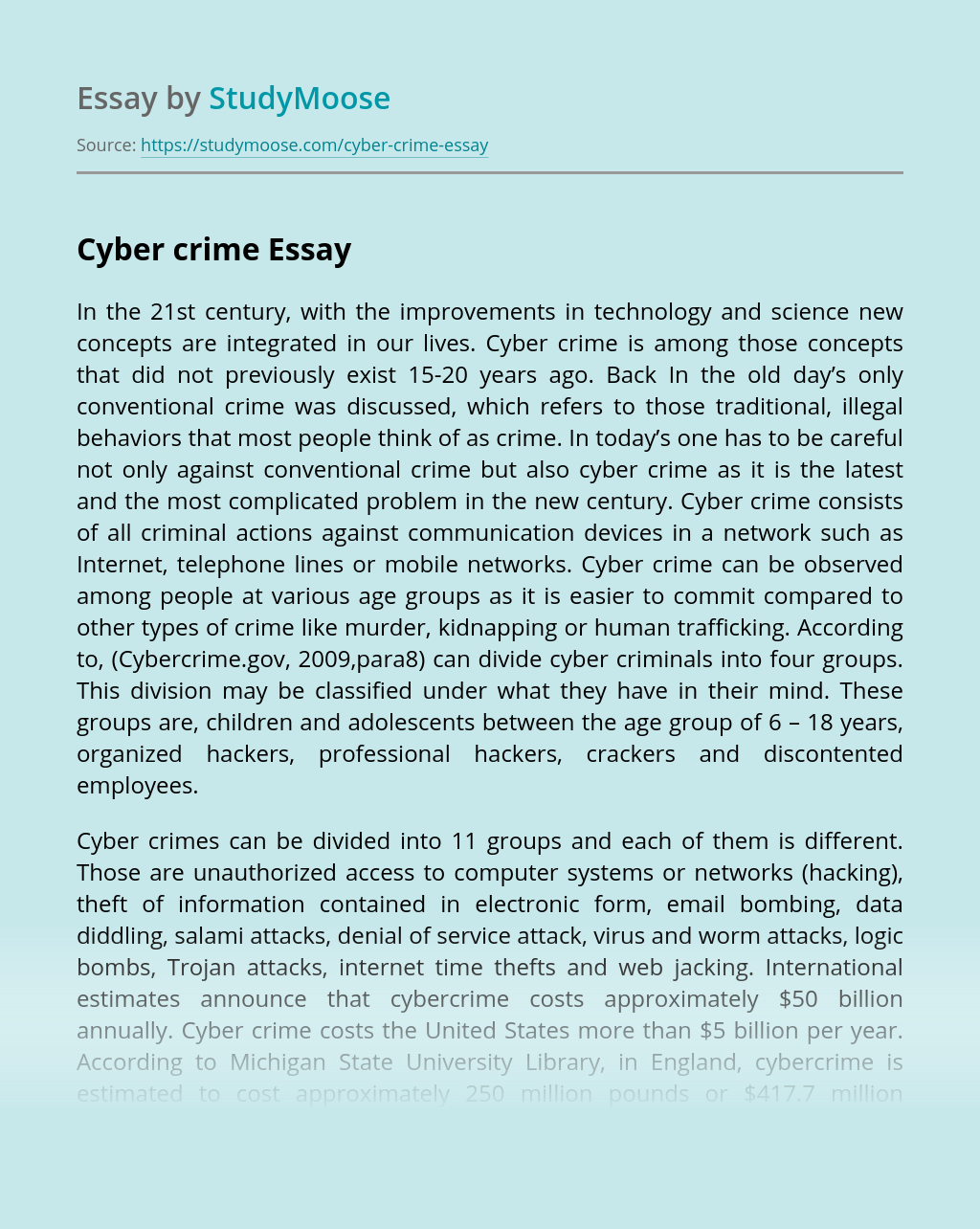 Using Smart Board Technology in Education

Background of the study (DISCUSSION OF MAIN TOPIC, PROBLEM STATEMENTS AND SPECIFIC TOPIC) VoIP is a revolutionary technology that has the potential to completely rework the world’s phone systems. VoIP is often referred to as IP telephony (IPT) because it uses Internet protocols to make possible enhanced voice communications. Objectives of the study General Objectives:...

As a dominator in both the PC operating system and office suite markets, Microsoft Corporation expose themselves to the cloud-based computing model presents execution and competitive risks. They are transitioning to a computing environment characterized by cloud-based services used with smart client devices. Their competitors are rapidly developing and deploying cloud-based services for consumers and...

Computer games are the second most frequently used application after social media (Wakoopa, and negative outcomes, especially with respect to aggression (see in Sherry, 2001; Elson & Ferguson, 2013a, 2013c; Ferguson, 2007). Although less than 4% to 5% of the users—adolescents and secondary school students—are addicted to video/computer game (Kuss & Griffiths, 2012), some of...