Machiavellian Leaders of the 21st Century

One of the most controversial people, Niccolò Machiavelli, created a political theory in which the main idea was that any means necessary should be used to remain in power. Machiavellian leadership is described in depth in Machiavelli’s influential book “Il Principe” which has since been interpreted, translated, and rewritten into a modern English version “The Prince”. Although the book was originally written in the early sixteenth century as advice for politicians and kings the ideals and concepts are still applicable to modern day politicians and governments.

Don't use plagiarized sources. Get your custom essay on
“ Machiavellian Leaders of the 21st Century ”
Get custom paper
NEW! smart matching with writer

One of the united states most recent presidents Barack Obama often demonstrated practices opposite to that of Machiavelli although occasionally one could argue similarities between their political views.

His book the prince can be interpreted as metaphors that guide politicians which are all still absolutely still applicable to modern politics.

Barack Obama served as the 44th President of the United States. He is well known for being the first African American President. He was grew up in a middle class upbringing but worked hard and made his way to Harvard. Obama understood the racist climate that he existed in at a young age but was over to overcome this by working hard in school.

Obama grew up most of his life without a father figure. Former president Obama was first elected in 2008 and then elected in 2012 serving an eight year term. Considered his greatest domestic achievement Obama care provided affordable healthcare for millions without coverage. He is also well known for the raid that killed terrorist leader Osama Bin Laden. Some of his other accomplishments include raising minimum wage, stimulating the auto industry, and jumpstarting the economy through the signing of the Recovery Act.

Machiavellian intelligence refers to the understanding and following of Machiavelli’s political inquiries, people with Machiavellian intelligence are often described with tendencies to be unemotional, detached from the basis of conventional morality and therefor manipulative and deceiving. Obama was emotional throughout his eight year term on multiple occasions, seen crying during The Sandy Hook school Massacre and during The introduction of new gun laws into the US which has been reported as one of Obama’s biggest frustrations during his presidency as well on many other occasions. As Machiavelli wrote “The Vulgar crowd always is taken by appearances. And the world consists chiefly of the vulgar.” With a belief that most of the world has a lack of sophistication which is why as a politician it is important to remain refined. Ways politicians have presented themselves has a direct relationship with Polls. And as the US first black president in a predominantly white America president Obama overcame these precedents first by his election and continuing by his ability to appear as a human instead of an emotionless politician.

Although the book was written 500 years ago there’s still connections to our modern day political system, for example a quote pulled from “The Prince”, “distrust mercenaries and auxiliaries” has a direct meaning to the time it was written it also contains an underlying rule applicable to today to make sure the people below you are either loyal or dependent on you. This is to prevent employees from having opposing views and to make sure that no one has any reason to act against you. Obama did the opposite, Hillary Clinton a political opponent to President Obama who lost against him in the primary election of 2008 was appointed as Secretary of State by President Obama. Obama did this in order to have discussion with an understanding that he is not always right and that discussion is beneficial. An example of following this Machiavellian view is President Trump and his well known “you’re fired” which he’s used on multiple occasions simply because someone disagrees with him. A Machiavellian leader understands that “It is safer to be feared than to be loved” but president Obama understands that in no way is it more beneficial.

Machiavellian practices included immoral practices such as delegating blame to people who are not at fault. Machiavelli writes “Princes must delegate difficult tasks to others, and keep popular ones for themselves” Donald Trump often does this when something goes wrong he gives people someone to blame other than himself. It’s a common theme among presidents to blame their predecessors for problems with the economy. Barack Obama is not innocent from this, never calling out people by name but often addressing problems with “we inherited”, arguably there is no way avoid this, as the problems had to come from somewhere, its the actions afterwards that say a lot about a political leader, whether they continue to blame people for the problems or if they fix them as soon as possible. Another issue is when a president makes decisions that worsen the political environment but chooses to place blame on someone other than themselves in order to ignore the problem. It is understood from Machiavelli’s “prince” that as a political leader the most important person is you. Obama did not feel this way, in-fact one of Obamas main goals throughout his service for the United States was aiding minorities and the poorer ninety percent of America. Machiavelli once said “Politics have no relation to morals” his methodology was unforgiving unlike President Obama who throughout his presidency was a polite, kind leader, that no doubt put his country before himself.

Machiavelli understood that one can not remain in power with strictly honesty. “Any man who tries to be good all the time is bound to come to ruin among the great number who are not good. Hence a prince who wants to keep his authority must learn not to be good, and use that knowledge or refrain from using it a necessity requires.” As mark twain once said

“An honest politician is an oxymoron.” Obama often called upon “hope” during his campaigning which wasn’t really an answer to a lot of the questions at hand at the time. Which isn’t really lying but it isn’t really telling the truth either. It allowed for Obama to gain political trust from the people of the united states without losing undecided voters to contradicting political views.

A famous saying “The end justifies the means” stemmed from Machiavellian practices. Does a good outcome excuse wrongs committed to attain it? Of course this depends on who you’re asking and what “wrongs” were committed. Most political candidates hope that the sacrifices they make are worth the outcome. A controversial topic during president Obamas term was the Keystone Pipeline, he rejected the plan losing thousands of jobs but in the end made a decision that would have protected the United States environment, only to have it built right away by the next president Donald Trump. Depending on who you ask, some people will argue that the economic profits of building the pipeline out weigh the endangering of many species of animals, polluted water, sacred land taken away from Native Americans, the millions of years that the warming climate will take off of earths life and others will argue the exact opposite.

For a politician to stay in office they have to at least be a little Machiavellian as some aspects that Machiavelli wrote about apply generally to being in-charge. That being said, yes Obama has made decisions that could be viewed from a Machiavellian point of view but viewing Former President Obama from an overall perspective is not Machiavellian. He cares for the overall well being of his country over his political position, proving this through his accomplishment of Obama care. Machiavellians are willing to be immoral to maintain power. Obama is not an egotistic, power hungry political leader. In the modern day political climate it is unrealistic to succeed as an immoral Machiavellian political leader due to the media coverage of politicians lives swell as the progressive population of the United States of America. Former president Obama may have practiced Machiavellian strategies during his eight year term but is by no means significantly comparable to Niccolò Machiavelli’s un ethical way of ruling.

During Obamas eight year term as the President of the United States of America He was morally the opposite of Niccolò Machiavelli. President Obama was not Machiavellian. The political environment that he served in a Machiavellian leader would not survive. Obama was conventionally moral, did not rely on fear to hold a position of power, put trust in his political opponents by appointing Hilary Clinton, made decisions that benefited the country solely for the purpose of benefiting the country and not himself, did not pull any stunts that wrongfully put other people lives at risk, and overall did not have a main goal of becoming the most powerful by any means.

Machiavellian Leaders of the 21st Century. (2021, Apr 20). Retrieved from https://studymoose.com/machiavellian-leaders-of-the-21st-century-essay 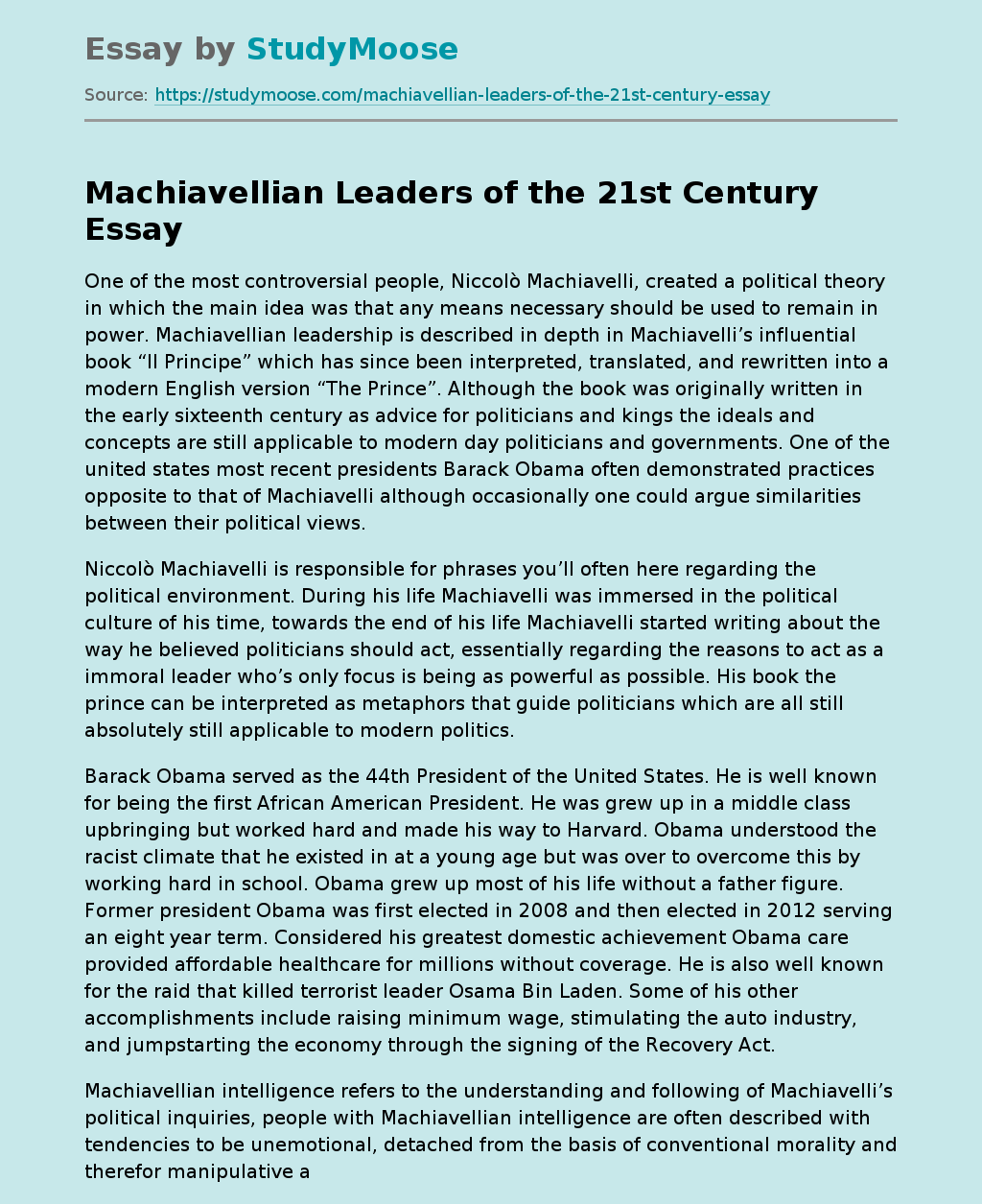