The Red Lotus of Chastity

Devasmita and the nun, two characters in Somadeva’s “The Red Lotus of Chastity”, employ the same concept from Machiavelli’s “The Prince”. Both Devasmita and the nun attempt to follow Machiavelli’s concept of being a lion and fox. However, only Devasmita succeeds in being both animals while the nun is merely a power hungry lion trying to dress up in a fox costume that did not fit.

This concept of being a fox and lion means that to succeed in your ‘battle’ a person must be a cunning, deceitful fox and a powerful, aggressive lion both at the same time.

Having an aggressive and vengeful side to her plan proves Devasmita is ruthless and powerful like a lion. However, she does not act in a manner of mere blatant violence. She uses her concept of the fox to first deceive her opponent with a seemingly harmless tea and then impair them with the Datura poison.

By using Machiavelli’s concept of being both the lion and the fox, Devasmita comes out victorious in her fight against the nun and the merchant’s sons. Near the end of the story Devasmita must save her husband from the revengeful merchant’s sons. Because she previously did such an effective job at being both a lion and a fox, she is able to have one step ahead of her opponents. “‘So we shall,’ they said. They unwound the turbans on the four men and they all saw the dog’s paw on their foreheads. The merchants’ guild was ashamed, and the king surprised”. (967) This part of the story shows that although Devasmita’s use of the lion concept and branding the men as dogs was not a part of the initial plan, her fox is able to step in and save the day. As a fox, Devasmita is able to quickly think and deceive the local king in believing that the dog’s paws actually mean something more than the men just being like animals. By thinking outside the box like a sly fox would, Devasmita easily puts another cuckold on the merchant’s sons and leaves them speechless when they are proven to be her slaves. Contrasting to the success of Devasmita, the nun’s plan ends up in utter failure. This is mainly because the nun is merely a dimwitted and hungry lion trying to appear as a fox.

Despite her attempts in trying to deceive Devasmita, the nun gives away her plan from the beginning and has no chance in beating her. “‘There are some merchant’s sons from the Archipelago who are staying in town,’ said the nun. ‘I shall bring them to you if you want.’ Overjoyed the nun went home”. (965) When the nun tells Devasmita that she will deliver the merchants’ sons to her, she is automatically failing to be a Machiavellian fox. Because the nun reprimands Devasmita for not following her duty, she gets caught up in her own lies, and forgets to pay attention to her own duty (which Devasmita sees right away). Because the nun has a higher position in society than Devasmita does, when the nun tells her that she will do the dirty work for her, Devasmita is able to see right through the nun’s plan. Also the fact that the nun goes home ‘overjoyed’ proves that she fails as a fox because a fox should always have a watchful eye on its surroundings instead of being caught up in the moment. Her over-enjoyment of the situation exposes her obvious schemes as a vicious lion to the wily Devasmita.

There is a significant difference in the motivation that Devasmita had in using the lion and fox and the motivation that the Prince should have had. First and foremost, Devasmita was in a position where her family was in danger. At first her own life and chastity was in the loop, with the merchant’s sons scheming to rape her. Even after she humiliated them by using both the fox and the lion, these vengeful men came after her husband, signifying the matching other part of her family. On the other hand, a prince who decides to be a lion and a fox should do such things out of desire and yearn for more control over a larger of people. “In the end they have conquered those who have put their reliance on good faith”. (2528 Prince) By being able to trick others as a fox and then pounce on them with the strength of a lion, a prince will have no enemies that can elude him. This differs greatly from Devasmita’s stimulus to be both a fox and lion because the prince need not be in danger to use this Machiavellian tactic.

The Red Lotus of Chastity. (2016, May 17). Retrieved from http://studymoose.com/the-red-lotus-of-chastity-essay 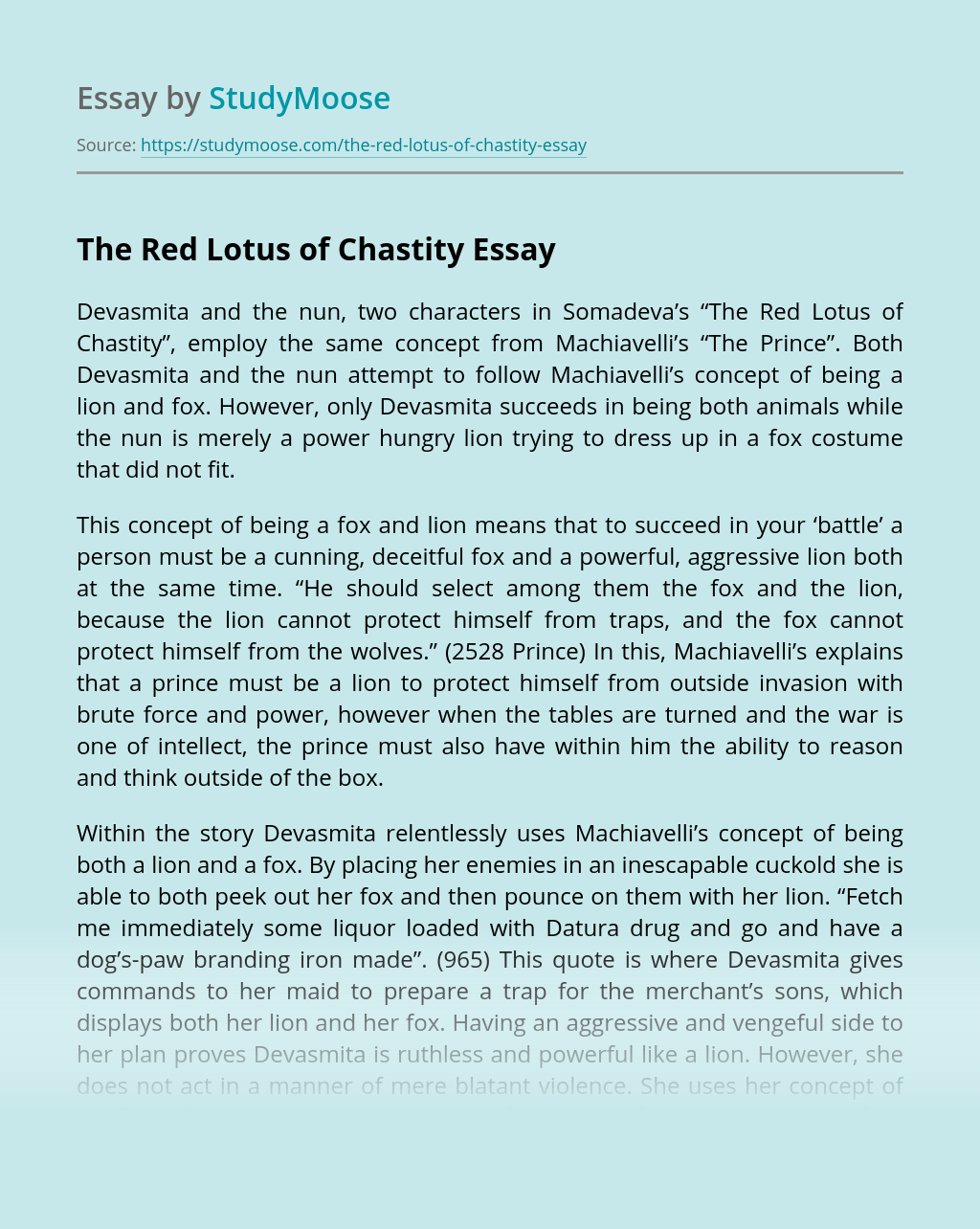 Don’t waste time
Get a verified expert to help you with The Red Lotus of Chastity
Hire verified expert
$35.80 for a 2-page paper
Stay Safe, Stay Original