It's Better To Be Feared Than Loved

It is easier to rule with terror and fear than to force the people to be happy and to love the ruler. According to Machiavelli, to be an effective ruler, one must rule without a moral conscience, because feelings and emotions would interfere with difficult decisions. In the play, Macbeth by William Shakespeare, Macbeth is a notorious leader who rules with the power of fear among his people and leaves behind his moral conscience. Macbeth is a successful ruler with terror because he causes Duncan’s heirs, Donalbain and Malcolm to flee Scotland, he gains authority quickly and with little suspicion, and displays acts of justice towards Macduff.

Don't use plagiarized sources. Get your custom essay on
“ It’s Better To Be Feared Than Loved ”
Get custom paper
NEW! smart matching with writer

Macbeth instills fear among Duncan’s heirs who are supposed to take the throne if Duncan was to die.

After everyone discovers that Duncan had been murdered, Donalbain and Malcolm acts quickly and flees Scotland in order to protect themselves. Donalbain says to Malcolm, “What should be spoken here, where our fate, hide in an auger hole, may rush and seize us? Let’s away.

Our tears are not yet brewed” (II.iii.12-15). Because of Macbeth’s actions, he successfully takes control and causes Donalbain and Malcolm to flee. This makes it easier for Macbeth to become king. They both agree to separate, and Malcolm says, “What will you do? Let’s not consort with them. To show an unfelt sorrow is an office which the false man does say. I’ll to England” (II.iii. 127-129). With the both of them out of the country, and out of Macbeth’s Cao way, Macbeth takes the throne and is the new king of Scotland.

This action proves that it is better to be feared than loved.

Macbeth attains his authority quickly because he terrifies Duncan’s heirs. He did not have to wait a long time for his power. Once Macbeth is the king, he holds a state banquet to celebrate his authority. Banquo says to Macbeth, “Let your Highness command upon me, to the which my duties are with a most indissoluble tie forever knit” (III.i.12-14). The only character who suspects Macbeth of doing evil deeds in order to get the throne is Banquo, but Macbeth has him killed before he can demolish Macbeth’s authority and reign. Upon hiring the murders to kill Banquo, Macbeth thinks without his moral conscious. Not only did Macbeth gain power quickly, but he sustains his power for quite some time. Macbeth proves that ruling with fear is more effective, because he does not have to work hard to gain the people of Scotland’s love and affection.

Instead, he uses the quick and easy way to hold his position among Scotland. Macbeth gives justice to Macduff because he betrays his homeland by fleeing to England. Macbeth kills Lady Macduff and her son in order to protect him from the first apparition. At the Macduff household, Lady Macduff says, “He had none, his flight was madness. When our actions do not, our fears do make us traitors” (IV.ii.3-5). Macduff is seen as a traitor to Macbeth because he had fled the country. Macbeth gives justice to Scotland and his citizens by having his family murdered. His tactics upon murdering Macduff’s family keep Scottish citizens in fear. His terrorizing actions make Macbeth a successful leader.

It was better for Macbeth to rule with fear because he was able to terrorize Duncan’s heirs, gain his power quickly, and gives justice to Macduff. Macbeth becomes treacherous, but his power only becomes more apparent. As a ruler, to gain respect, obedience, and loyalty, he or she must rule with fear because it is easier to be feared than to gain one’s love.

It's Better To Be Feared Than Loved. (2016, Apr 03). Retrieved from https://studymoose.com/its-better-to-be-feared-than-loved-essay 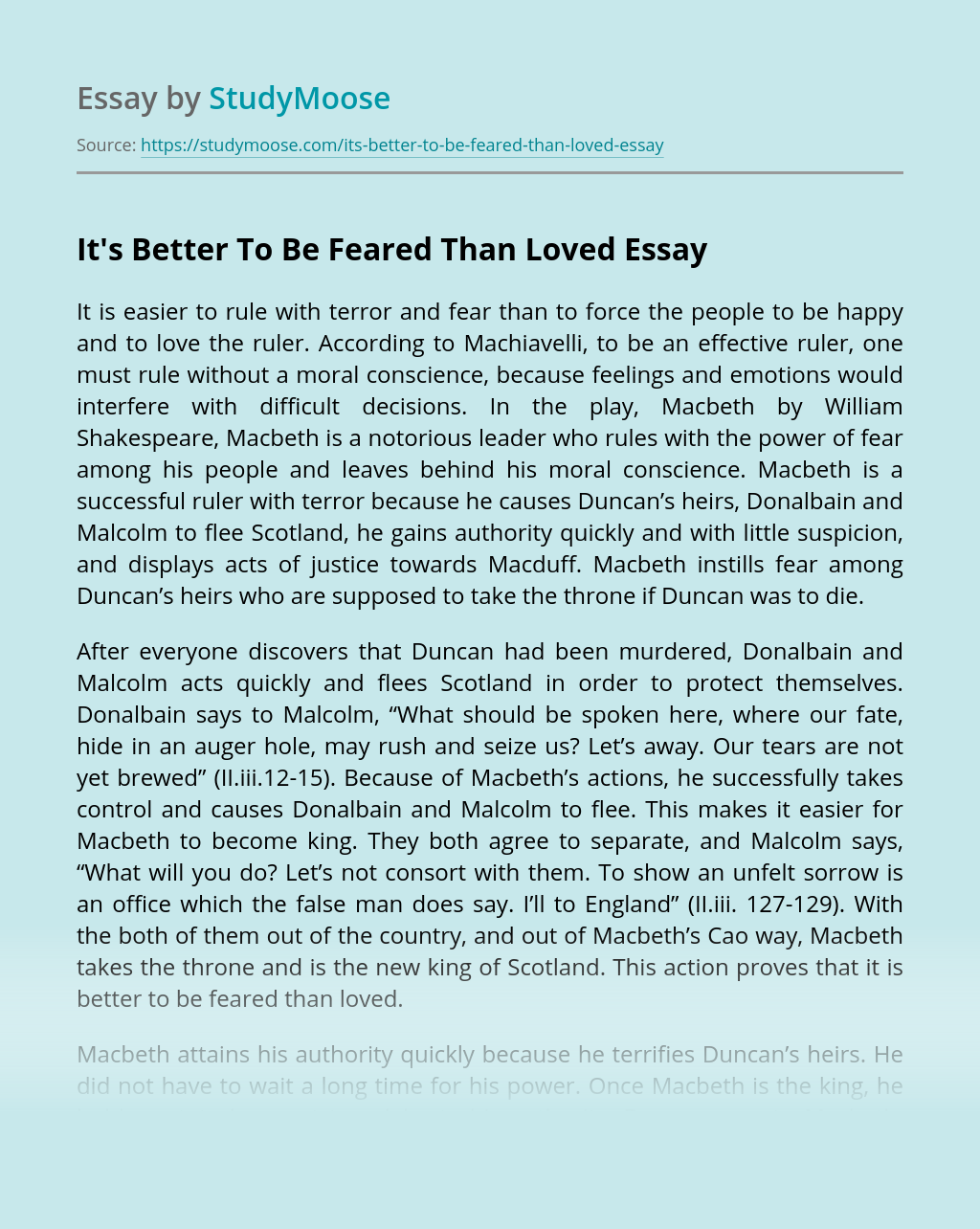