Is Macbeth a machiavellian character?

” …for how we live is so far removed from how we ought to live, that he who abandons what is done for what ought to be done, will rather learn to bring about his own ruin than his preservation”.(Machiavelli 12) This is a quote from Machiavelli’s “The Prince”. This is only one belief of Machiavelli, which, many great leaders have been known to use. Have you ever thought about a leader that possessed these qualities that was from a play? Shakespeare’s character Macbeth represents the Machiavellian idea that a ruler should appear well in public, be smart and strong, and do what is necessary to hold onto power.

Don't use plagiarized sources.
Get Your Custom Essay on Is Macbeth a machiavellian character? Just from $13,9/Page

Shakespeare used imagery, and metaphors to portray Macbeth this way because, although he dies in the end, Macbeth still used Machiavelli’s ideals, and was successful in many ways.

Both Machiavelli and Shakespeare knew that it matters how a leader portrays himself to the public. Machiavelli thought that it was important for a leader to appear to be good in public, and hide his bad qualities from his people.

“…he should seem to be all mercy, faith, integrity, humanity, and religion….Everybody sees what you appear to be, few feel what you are, and those few will not dare oppose themselves to the many…”. (Machiavelli 15) Machiavelli used diction to portray what a leader should be like in the old ages, such as; having mercy, faith, and religion. He also says that you should at least pretend to show some of these qualities to your people. As Machiavelli writes, Macbeth talks about hiding his dark self to the world.

“MACBETH [aside]: The Prince of Cumberland-that is a step/ On which I must fall down or else o’erleap/ For in my way it lies. Stars hide your fires / Let not light see my black and deep desires/ The eye wink at the hand; yet be/ Which the eye fears, when it is don’t to see”. (1.4 49-54)

Like Machiavelli’s idea to hide your dishonest self, Macbeth reassures himself to do so. Macbeth’s use of metaphors such as light versus dark, emphasized good versus bad. Macbeth clearly states that he has an immoral side that he is trying to hide form everyone else, and in doing so he believes he will gain more power, and the trust of his people. wrote to get the attention to people, and they both knew the importance of how a leader should act.

“…but you must have the mind so disposed that when it is needful to be otherwise you may be able to change to the opposite qualities….And therefore, he must have a mind disposed to adapt itself according to the wind, and as the variations of fortune dictate and, as I said before, not deviate from what is good, if possible but able to do evil if constrained”. (Machiavelli 15)

Machiavelli’s ideal pertains to this example of Macbeth doing what he needs to do in order to gain power for himself, by the murder of King Duncan. “MACBETH I go, and it is done. The bell invites me./ Hear it not Duncan, for it is a knell/ That summons thee to heaven or hell”. (2.1 62-64) Machiavelli’s ideal is shown through Macbeth’s thought on his murder of King Duncan. He is using an apostrophe to say to King Duncan that he will not hear the bells because he is dead. He is talking about this because, he knew that he needed to get rid of him, or else he would not have been able to gain power. As this specific incident shows Macbeth is using a Machiavellian ideal to push himself, and his power further.

Shakespeare and Machiavelli knew that rulers should have wit and bravery to really have control of their power. Machiavelli believed that a ruler should be smart, sly, brave, and strong to frighten away those who would challenge his power.

“A prince being thus obliged to know well how to act as a beast must imitate the fox and the lion, for the lion cannot protect himself from traps, and the fox cannot defend himself from the wolves. One must therefore be a fox to recognize traps, and a lion to frighten wolves”. (Machiavelli14)

Machiavelli uses imagery/ symbolism to show animals being certain characteristics, the fox being wit and slyness, and the lion strength and bravery. Just as Machiavelli wrote, his rule applies to Macbeth’s character in this quote.

“MACBETH Who can be wise, amazed, temp’rate and furious, / Loyal and neutral in a moment? No man,/ Th’expidition of my violent love/ Outran the pauser reason. Here lay Duncan,/ His silver skin laced with his golden blood,/ And his gashed stabs looked like a breach in nature/ For ruins wasteful entrance; there the murderers,/ Steeped in the colours of their trade, their daggers/ Unmannerly breeched with gore. Who could refrain/ That had a heart to love, and in hat heart/ Courage to make loves known”. (2.3 105-115)

As Machiavelli wrote Macbeth is showing this idea. He is using his wit to say he killed to guards out of violent love for the king. This quick witty response not only added to the trust from people around him, but also it stopped the guards from coming back to defend themselves, and challenge Macbeth. Macbeth used imagery of Duncan’s body, which was so perfect and royal lying dead, still looking perfect and regal. Macbeth used this to make it seem that he loved King Duncan so much and he looked up so highly of him, he needed to kill the guards after what he they had done. Both Shakespeare and Machiavelli used imagery to show what a ruler needs in order to hold onto power.

This is because Macbeth was able to do cruel things to benefit himself on his way to power, but once he had the power, he lost the main idea of keeping that power, and he went mental. If Macbeth had kept a clear view of exactly what he wanted, and didn’t go a little insane with guilt then he would have been able to avoid the end tragedy of his death. Do you think the play Macbeth would have ended the same if Macbeth had been able to accept the fact that his cruel deeds were going to further his power and his state?

Is Macbeth a machiavellian character?. (2016, Jul 22). Retrieved from https://studymoose.com/is-macbeth-a-machiavellian-character-essay 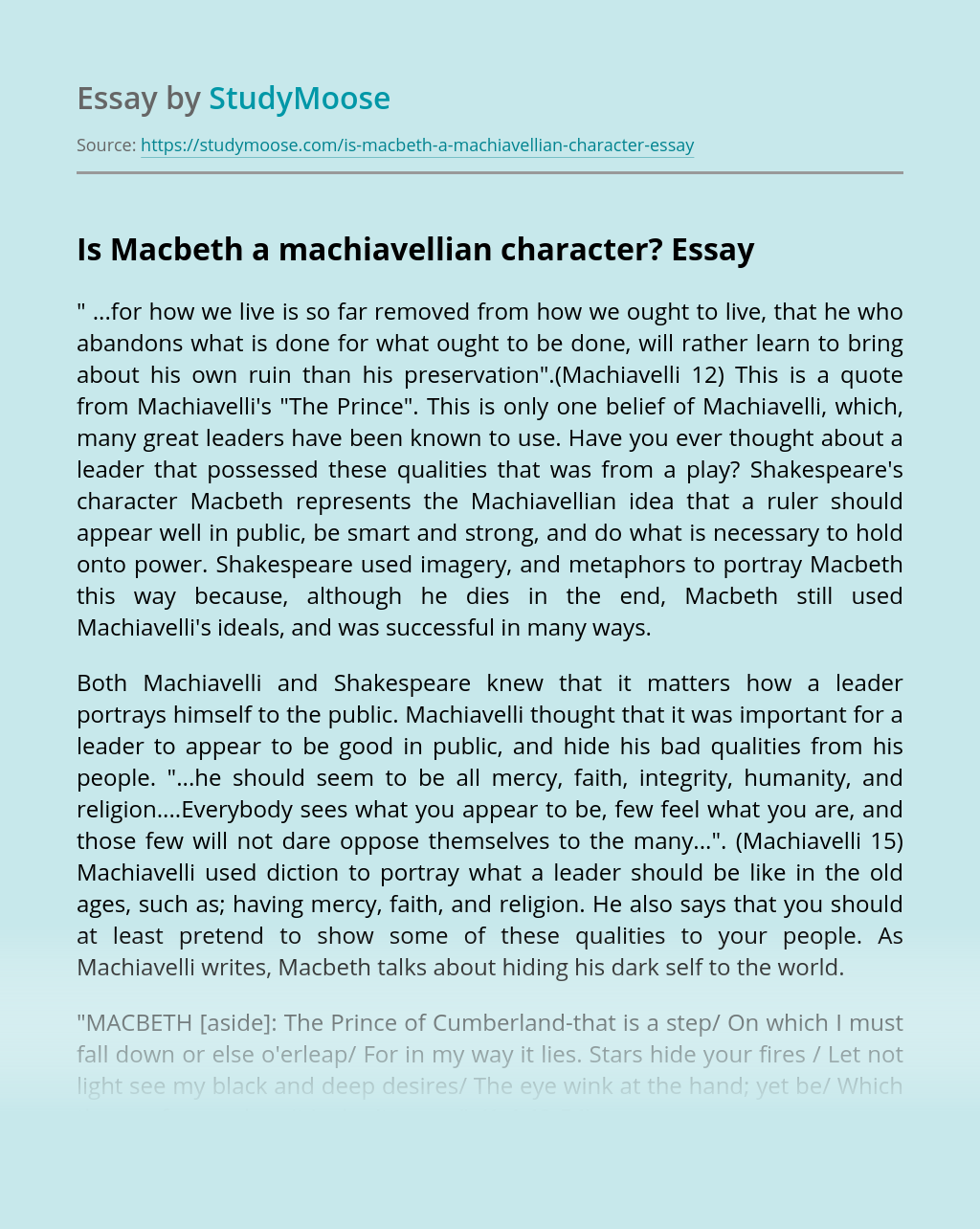 For you to find the Defendant guilty of the crime of Contempt, you must be convinced that the prosecution has proved one of the following beyond a reasonable doubt: (1) the Defendant misbehaved in the King’s presence or so near thereto as to obstruct the administration of justice; or (2) the Defendant disobeyed or resisted...

Get Essay
Hamlets downfall stems from his inability to revenge

Hamlets downfall stems from his inability to vengeance. How is this fore grounded in the early parts of the play, breaking from the traditional conventions of an Elizabethan revenge disaster? It can be said that Hamlet’s procrastination and failure to act lead to his eventual death. Shakespeare forewarns the audience of Hamlet’s defects throughout the...

Central Conflict: Doctor Faustus is unsatisfied with the limits of traditional forms of knowledge so he decides that he wants to learn how to practice magic. With the help of his friend Valdes and Cornelius teaching him magic, he starts off his career by summoning a devil named Mephastophilis. He sends Mephastophilis back to his...

Two main themes in the novel The Kite Runner are that of social class and gender roles. Everywhere that Amir, the main protagonist, turns, society is divided. From his earliest childhood memories to living in America, there always seems to be some sort of invisible line drawn between his people. There is separation between the...