‘We shouldn’t be shocked by Stanley’s attitude to women and his violent behaviour; he is just a product of his time.’ In the light of this statement, explore how Williams presents masculinity in A Streetcar Named Desire. The question of whether the reader of A Streetcar Named Desireshould conceive every aspect of behavior exhibited by the key characters as being symbolic of their time is one that has been dogged by controversy. According to some readers, Stanley’s attitude to women and his violent behavior is nothing but a representation of the male values of the 20th Century South American society.

Don't use plagiarized sources. Get your custom essay on
“ Williams presents masculinity in A Streetcar Named Desire ”
Get custom paper
NEW! smart matching with writer

However, some readers still argue that Stanley is just an individual, and like any one of us, his actions should be perceived as products of his personal beliefs, values and choices. Simply stated, the answer to this question totally depends on the school of thought from which the reader operates.

The proponents of the view that Stanley’s attitude to women and his violent behavior is a mere representation of his time argue that the way of life in the 20th Century South American society in which the play is set made it necessary for low-class members of society to use brute force in order to get their voices across.

Such readers would cite the fact that the way of life in the South created two classes of people, the bourgeoisie and the proletariat, who were in constant conflict with each other over resources. Being a very poor man himself, Stanley naturally fitted into the proletariat class (a group of serfs who had lived under oppression by the Lords of the South for generations until the revolution).

Thus, when we hear from Stella how Stanley “snatched off one of [her] slippers” on their wedding night and “rushed about the place smashing the light bulbs with it”, we cannot help feeling that pent-up emotions could have been responsible for Stanley’s violent behavior.

In fact, the very choice of diction “rushed” and ‘smashing” have been deliberately used by Williams to emphasize the sheer madness and undue force that characterized the behavior of Stanley on a night that should naturally have been his most quiet and peaceful. At this point, it does help to remember the words of Aime Cesaire in Cahier d’un Retour au Pays Natal that the oppressed have no choice but to resort to violence since “the only language that the oppressor understands quickly and accurately is the language of violence”. Moreover, as Marxist critics would aver, whenever there is a clash between the ‘haves’ and the ‘have-nots’, violence is inevitable. To this extent, therefore, it can rightly be argued that Stanley’s violent behavior could have been truly representative of the pent-up anger that all South American Serfs bore towards their society at the time the play is set.

Furthermore, Stanley who is referred to by Williams as an “ape” in a statement Joseph Wood claimed he heard William make saying “You had better look out or the apes will take over”, truly presented as a product of his time in this aspect of his violent behavior towards mainly Blanche when he rapes her and Stella when he beats her. Williams uses stage directions to vividly describe Stanley beating Stella saying “There is a sound of a blow. Stella cries out.” The use of the onomatopoeic technique “blow” emphasizes the magnitude of violence Stanley exhibited as this portrays it as truly horrific.

This is largely linked with Williams reference to Stanley as a representation of the “apes” in the world as this word “ape” connotes to violence, roughness and barbarism. However these are all traits in Stanley’s characters that can be directly linked to influences of his time as men were generally expected be “macho” and powerful and in this way, Stanley was simply conforming to the expectations of his society. Even Stella admits to loving Stanley’s power and masculinity saying she is “thrilled by it”. This conveys the William’s idea that this was the ideal male behavior in this society.

Stanley’s masculinity is perhaps best seen towards the end of the play when he brutally rapes Blanche committing expressing his dominance in the worst way. According to the critic Russell, “a macho performs sexual intercourse to establish masculine power and create female submission”. Throughout the play, we see Stanley use sex to hold power over women especially in the case of Stella, who overlooks all his other shortcomings because of the desire he stirs in her saying “…there are things that happen between a man and a woman..that make everything else seem- unimportant.” This can once again be seen as a result of the society of that time in which dominance over women and sexual power was a trait of masculinity, therefore forcing Stanley to strive for this by exercising his sexual appeal and power.

On the other hand, Mitch, a character quite important in the play and also Blanche’s love interest, was not portrayed by Williams as a stereotypical Macho man. He instead was kind and thoughtful to Blanche and Blanche exclaims “Thank you for being so kind! I need kindness now.” She also identified him as “superior to the others” and yet “sensitive [looking]”. Williams therefore portrays a great contrast between the two friends and in this way shows two types of masculinities. However this keeps the reader wondering therefore if Stanley’s attitude towards women and his treatment of them really was a result of his time or simply the character that Williams created to put across a certain message.

Overall whether a product of his time or simply just his character, Stanley is a focal character in William’s portrayal of masculinity in a Street Car Named Desire. Williams mainly portrays masculinity in the play as “using aggressive behaviour as verification of manliness, believing in male superiority, seeing women as sexual objects to be dominated and being extremely jealous and possessive” as commented by Koprince. In this way, Williams might be using Stanley’s character and his masculinity to enforce a personal message of the wrong perception of masculinity in the world. 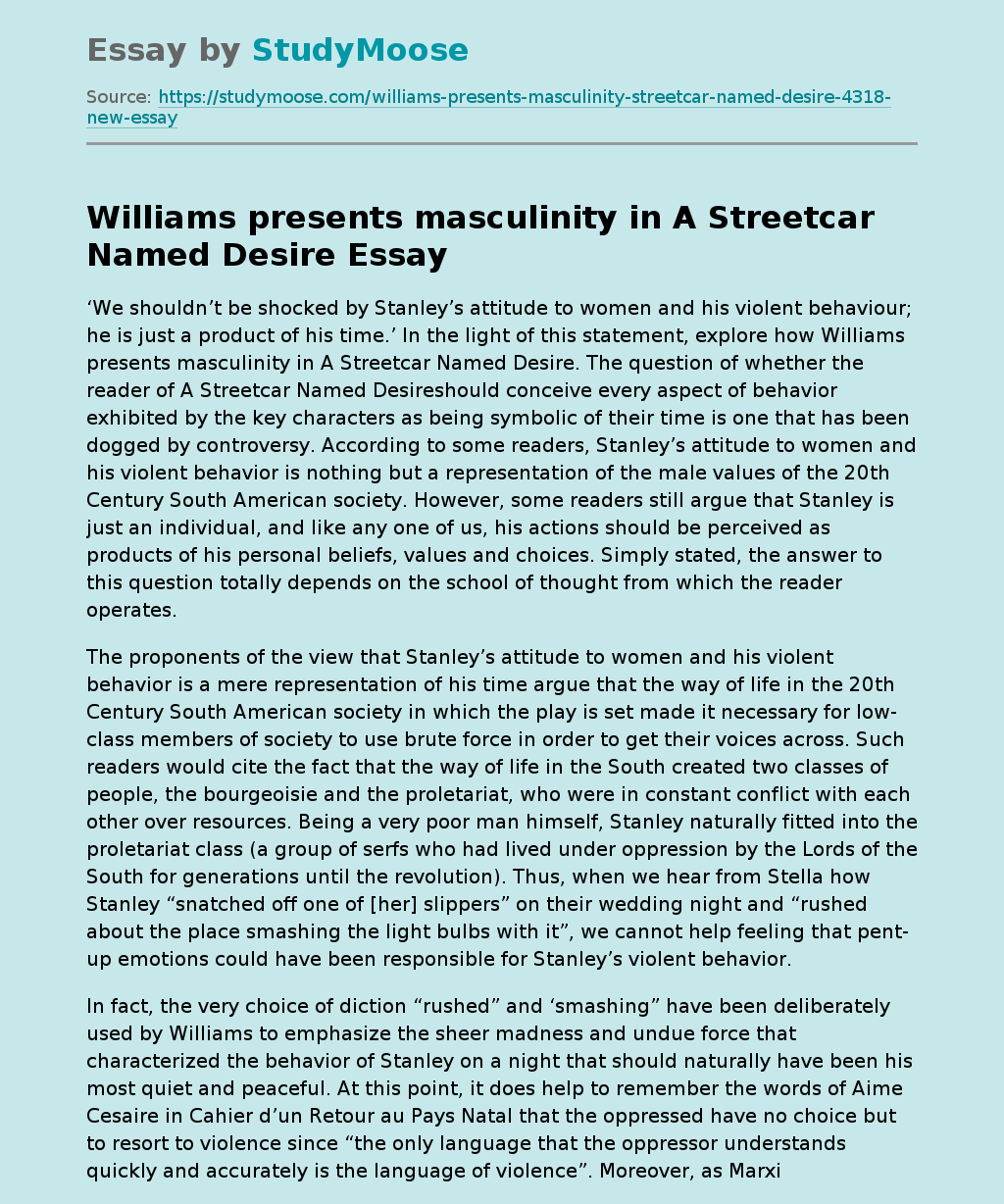