Family in The Glass Menagerie by Tennessee Williams

An Escape from Confinement

The Wingfield family in Tennessee Williams “The Glass Menagerie” is one that is held together by the bonds of illusion, dysfunction, and entrapment. Amanda Wingfield lives in a lower middle-class apartment that Williams tells us is “symptomatic of the impulse of this largest and fundamentally enslaved section of American society to avoid fluidity and differentiation and to function as one interfused mass of automatism” (Williams, 1945, 400). Amanda and her two children, Laura and Tom, are enslaved in different ways.

Don't use plagiarized sources. Get your custom essay on
“ Family in The Glass Menagerie by Tennessee Williams ”
Get custom paper
NEW! smart matching with writer

Amanda is a slave to a past when the bloom was not off the rose, so-to-speak. Tom is enslaved by pity for his mother and sister that keeps him working in a warehouse job he hates as he is a poet. Laura is enslaved by her illusions. There is a constant struggle between reality and illusion in this play, something ironic in light of the fact that Williams attempted to avoid realism.

As Downer (1960) notes: “As a writer he is basically a poet, and he has done much to develop the possibilities of poetic expression in a theater that was created as a home for relentless realism” (222).

Laura’s development through the play influences the evolution of the idea, that one must escape enslavement to have the chance for a fulfilling existence. The truly dysfunctional family of the play didn’t manage to escape their confined existence. At first it could seem as if their lives are anything but normal, but Amanda’s “impulse to preserve her single-parent family seems as familiar as the morning newspaper” (Presley 53).

The Wingfields are a typical family just struggling to get by.

Their problems, however, stem from their inability to effectively communicate with each other. Instead of talking out their differences, they resort to desperate acts. The desperation that the Wingfields embrace has led them to create illusions in their minds and in turn become deceptive. Amanda, Tom, and Laura are caught up in a web of desperation, denial, and deception, and it is this entrapment that prevents them, as it would any family, from living productive and emotionally fulfilled life. All of the play’s characters make attempts at escape. The father is the ultimate symbol of escape because of his desertion. Laura continually escapes into a world of fantasy through the glass menagerie and the old phonograph records. Amanda tries to escape her current life by retelling stories of when she was young and life had limitless possibilities.

Tom escapes his life and his mind-numbing job by going to the movies and sometimes getting drunk. Even the apartment where they live is something from which they would like to escape. “The Wingfield apartment is in the rear of the building, one of those vast hive-like conglomerations of cellular living-units that flower as warty growths in overcrowded urban centers of lower middle-class populations and are symptomatic of the impulse of this largest and fundamentally enslaved section of American society to avoid fluidity and differentiation and to exist and function as one interfused mass of automatism” (stage directions, 1.1, Williams 1175). Williams uses a description of the setting to establish the prison-like feel .The play takes an ambiguous attitude toward the moral implications and even the effectiveness of Tom’s escape. As far as he might wander from home, something still pursues him. Like a jailbreak, Tom’s escape leads him not to freedom but to the life of a fugitive.

In their attempts to escape reality, all of the characters retreat into some kind of fantasy, whether it is films or glass animals. They find a source of comfort and contentment in these fantasy realms that they do not seem to find in reality. Each member of the Wingfield family is unable to overcome this difficulty, and each, as a result, withdraws into a private world of illusion where he or she finds the comfort and meaning that the real world does not seem to offer.

Of the three Wingfields, reality has by far the weakest grasp on Laura. The private world in which she lives is populated by glass animals that, like Laura’s inner life, are incredibly delicate. Unlike his sister, Tom is capable of functioning in the real world. But, in the end, he has no more motivation than Laura does to pursue professional success, romantic relationships, and he prefers to retreat into the fantasies. Amanda’s relationship to reality is the most complicated in the play. Unlike her children, she is partial to real-world values and longs for social and financial success.

Living in the past is Amanda’s way of escaping her pitiful present reality (Knorr). She never forgets to tell Laura and Tom about her receiving seventeen gentlemen callers in Blue Mountain when she was young: “One Sunday afternoon-your mother received-seventeen!-gentlemen callers! Why, sometimes there weren’t enough chairs enough to accommodate them all” (Williams 26). Amanda’s retreat into illusion is in many ways more pathetic than her children’s, because it is a distortion of reality. In The Glass Menagerie, memory plays an important part, both thematically and in terms of the play’s presentation.

Thematically, a reader sees the detrimental effects of memory in the form of Amanda’s living in the past. As far as the play’s presentation is concerned, the entire story is told from the memory of Tom, the narrator .When he begins to speak in Scene 1 of The Glass Menagerie, one of the first things he tells the audience is, “The play is memory. Being a memory play, it is dimly lighted, it is sentimental, it is not realistic.” The influence and power of memory is an important theme in the play and influences all the characters, which are trapped by memory. Tom is haunted by the memory of deserting his sister.

Amanda can’t move past the memory of living a better life in Blue Mountain. “A blown-up photograph of the father hangs on the wall of the living room, to the left of the archway. It is the face of a very handsome young man in a doughboy’s First World War cap. He is gallantly smiling, ineluctably smiling, as if to say “I will be smiling forever.” (Stage directions, scene One, Williams 1178). Just as the portrait of Amanda’s husband hangs in the house, so does the past hover over the present of the play.

Laura allows herself to become lost in phonograph records left by their father, the records themselves holding memories of the past. Even Jim is entangled by the memories of his days as a high school hero instead of just another guy working at a factory. The play examines the conflict between one’s obligations and one’s real desires, suggesting that being true to one may necessitate abandonment of the other. In the “Glass Menagerie” the characters have failed to escape enslavement, thus, losing the chance for a fulfilling existence.

The quotation from Thoreau, “The mass of men lead lives of the quiet desperation,” applies directly to the characters, as they were all unhappy, but took no action to improve their situation in any significant way. Breaking down the chain of a vicious circle is an ongoing issue that can be found in a work life, personal relationships, and even in relationships with oneself resulting in addictions. “The Glass Menagerie” gives a reader an incentive to act up on the stigmas, bias, and prejudices that one might have. It’s impossible to become a fulfilled and harmoniously accomplished individual without facing the dichotomy of one’s character. One has to get out of the world of fragile illusions and face the reality in order to be a happy person, as illusions create nothing but desperation.?

Family in The Glass Menagerie by Tennessee Williams. (2018, Sep 01). Retrieved from https://studymoose.com/glass-menagerie-2-essay 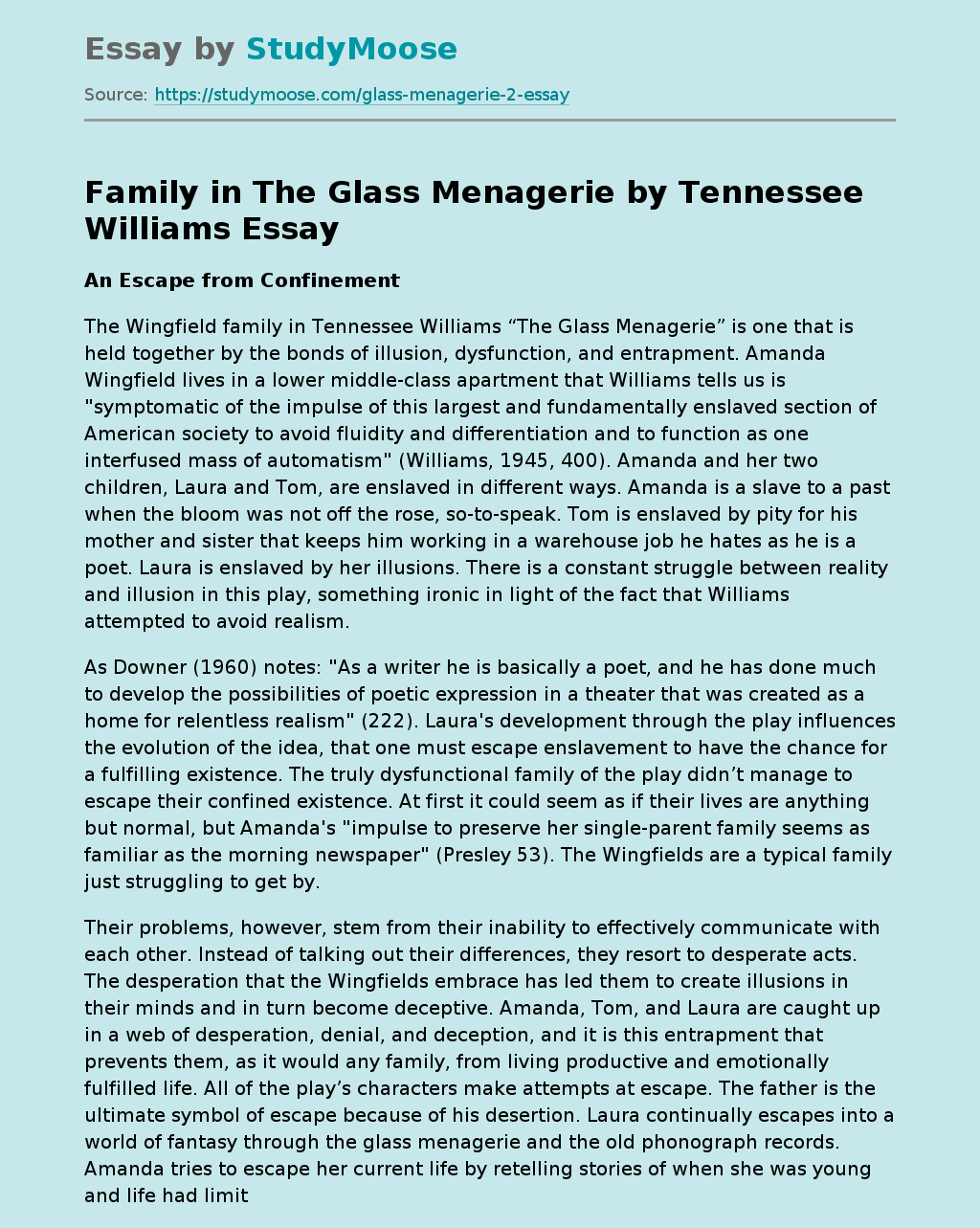