1. Writing as if you were speaking in Napoleon’s voice talking to the other animals, explain why Boxer is sent to the Knacker’s.

Comrades of Animal Farm! We are gathered here today not to mourn Boxer but to understand him. You see, Boxer was a great worker, he had two great ways of looking at life. 1) “I will work harder!” and 2) “Napoleon is always right!” In these two ways, Boxer was right. But you see, Boxer was not who we thought he was.

Boxer was a mischievous horse and he working for Snowball! You see, comrades, it turns out that Snowball was not on but he was actually sneaking around the very grounds of Animal Farm! His plan was to infiltrate Animal Farm by. Converting our best worker into a double-agent, a spy, and a sabotaging (insert adjective here)! And furthermore, it worked.

Squealer was doing his routine act of informing when he came upon Snowball and Boxer discussing these no-longer confidential plans in this very barn! This, comrades is why I have called this meeting to order.

I couldn’t have all of you grieving over something that is not worthy of :insert emotion here: So carry on, comrades and know that he died for a reason. forward, comrades! If you believe this is hard, then think about this, do you really want Jones back? Snowball and Boxer would have found a way to bring him back, and as your leader, I could not let that happen. I brought you all here today to tell you this, that I have rid us of a backstabber and doublee-crosser.

2. Animal Farm is an allegory. Find out what an allegory is, and in your own words explain what you think George Orwell is trying to explain about human behavior through this story about animals. Describe three characters with human personality traits that are universal and timeless, and speculate on what kind of people they represent.

An allegory is a story, poem, or picture that symbolizes a “hidden meaning” or maybe an idea. In this case, I believe that George Orwell is intending to symbolize politics and more specifically, socialism. In socialism, distribution of the output was decided by individual contribution. For example, the pigs claimed they were contributing the most via brain power and thought and therefore needed more food than the other animals. One character that has universal and timeless personality traits is Napoleon the pig, and leader of Animal Farm. Napoleon is power hungry like a lot leaders and eventually, in my opinion, becomes corrupt. He might represent ::::insert leadership role here:::. Another character with timeless personality traits is Boxer and well, the rest of the horses.

Boxer was an extremely hard worker and adopted the motto “I will work harder”. Boxer even started getting up a full hour earlier and stayed up later than the rest of the animals just so he could work on the windmill. For these reasons I believe that Boxer and the horses represent the working class. A third character with universal personality traits is Mollie. She is vain, conceited and wants the best for herself and is not concerned with the rest of the farm. She eventually abandons animal farm and decides to live on another farm so she may have more sugar cubes. This is the case with a lot of people. I believe Mollie represents the upper-class.

Napoleon uses Squealer for his own propaganda by “advertising” how great he is as a leader, how Animal Farm has significantly improved, and how Napoleon is in control. One method of propaganda is called glittering generalities. This method uses very “glittering” and positive language that make the listener feel great. The words suggest a very positive meaning but since the words are so general, they don’t actually guarantee anything. Squealer uses this when he brags about how marvelous Napoleon is as a leader and when he talks about how amazing their life will be before they overthrow Jones. Another method is called plain folks, which uses language to make the idea seem necessary, even for the most simple person.

Squealer uses this method by telling the animals that they were to engage in trade with neighboring farms only, of course, to obtain materials that were essential to building the windmill. After all, the windmill was their first and foremost priority. A third method is to have an important person advertise the idea to make it seem like the important person believes in the idea strongly enough o advertise it. This will reinforce the listeners’ trust in the idea because if said important person was trustworthy, then why shouldn’t the listener like the idea?

Squealer uses this when Boxer disagrees with him. When Boxer starts to protest Squealer immediately says “Napoleon said it.” Of course, Boxer’s motto is “Napoleon is always right.” so he went along with it. These methods of propaganda work because the animals are ignorant and they will believe what they want to believe, not necessarily what is true. They believed Napoleon was a good leader because they thought anybody was better than Jones. But the truth is, Napoleon ended up being just as bad and maybe even a worse leader than Jones.

4. How do the pigs use education and the lack of it to control the other animals? What larger point do you think Orwell is trying to make about knowledge and the power of education? The pigs use use the lack of education in Animal Farm to their own advantage. The majority of the animals are not very bright and will believe practically anything that they hear without thinking about it twice. Therefore the pigs, mainly Squealer and Napoleon, tell massive untruths to the animals of Animal Farm and nobody objects. You see, because the majority of the animals aren’t educated they don’t known what is true and what is not. The animals go along with what they are told because they don’t know any better.

I believe the larger point that Orwell is trying to make is that education is more important than we think, we shouldn’t take it for granted. If the majority of the USA was uneducated, the government might start getting different ideas on how to run the country which is basically what happened on Animal Farm. Knowledge is extremely valuable and absolutely essential. Had the animals been smarter they might have realized what was going on right under their noses. Or asked for proof when Squealer claimed they found documents that proved Snowball was evil. The power of education was underestimated in Animal Farm, and Orwell is trying to show that it is also underestimated in politics.

5. Compare Animal Farm to a book you have read recently. How is the message about society or human nature the same? What do the authors express that is different? Many books from the reading list on the back would make an interesting comparison.

A book I read over the summer was Mockingjay. The message about society or human nature is very similar in each book. In either book there is a rebellion that leads to different government. The government ends up being corrupt, controlling, and will do anything to maintain their image as powerful. For example in Mockingjay, each year they have the Hunger Games where 23 people are killed, and only one survives. This is to remind the people that the goverment is in control and it demonstrates their power very well. In Animal Farm, any animal that stands up to Napoleon or argues the slightest bit later ends up confessing to some sort of crime and being slaughtered. Coincidence? I don’t think so.

The main idea of the book is rebellion or corrupt governmentMost of the people in either book don’t understand what is going on and that works to the governments advantage. The people are busy with other struggles, for example a dead daughter/son or a spoiled wheat crop. The books do have many differences, however. In Mockingjay the government is corrupt because the president wants to get revenge on the citizens for rebelling oh-so-many years ago.

Animal Farm is considered a famous, class and significant book in 20th century literature. Research and reflect on its importance

George Orwell was a political writer. He had very intense feelings and emotions, specifically hate, that were projected in his writing. This is demonstrated in Animal Farm What events in his life might have influenced this book?

Orwell had experiences in the Spanish Civil War that affected the way he viewed government and its relationship with its people. His experiences with Soviet communism basically inspired this book, and therefore the book was based on Soviet communism. Publishers especially did not want to publish this book because it was about two Russian dictators, and they were portrayed as pigs.

What was the world like when he wrote Animal Farm?
World War II had just ended and much of Western Europe was happy with communist Russia with its efforts to beat Germany. Most people were pro-Soviet in 1943
What happened when Orwell tried to publish the book, and how was it received when it was printed?

When Orwell tried to publish Animal Farm, he had trouble finding a publisher that would publish his book. Animal Farm was basically a slap in the face to Soviet communism and a lot of people didn’t want to publish anti-Soviet literature. People greatly liked Stalin’s Soviet Union and therefore did not want to hear any criticism that Orwell had to offer, especially since this book is written out of animosity. Some even thought he was a Nazi supporter because of his stance on Soviet communism, since the two main pigs Snowball and Napoleon were obviously Stalin and Trotsky. After the war, however, Frederic Warburg decided to publish Animal Farm. What SPECIFIC historical figures and events does the story refer to in its allegory?

This story refers to two Russian dictators, Trotsky and Stalin. The revolt against Jones symbolizes the October 1917 Bolshevik Revolution. The Battle of the Windmill represents World War II and specifically the Battles of Stalingrad and Moscow.

People still read it today–even people who weren’t required to read it over summer vacation? In your opinion, why is this an important and well-liked book? People still read this book today, and it was extremely popular throughout the 1900s, after it was sold of course. I believe this book is well-liked because people like to know the truth. Its important to know the potential of bad government, and its opened my eyes to what the government could be hiding or what lies they could have told. This book is well-liked because although it is not explicitly said, this book is a warning for the Socialist movement and attempts to show its true colors, meaning, display how corrupt it can be. Orwell intentionally tried to make it harder for politicians to fool people in order to gain power. People do not like to be fooled at all, and I’m certain that is why this book is popular. Not only is it different than most stories and interesting, but it exposes the truth 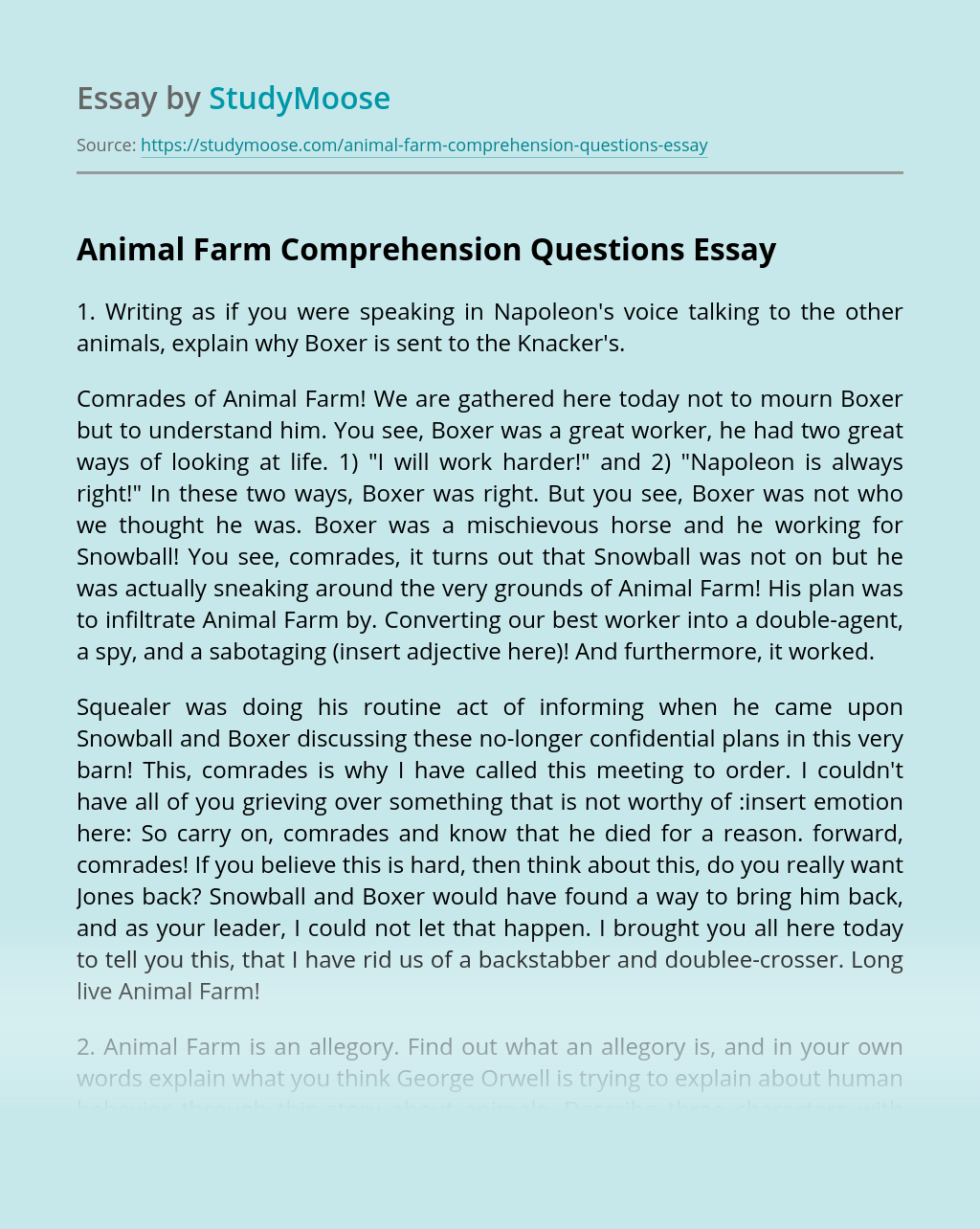