In Giovanni Pico della Mirandola’s “Oration on the Dignity of Man,” he discusses his conceptions and ideas on the nature and the potential of human beings. Notably, in his discussion, he reconciles and combines the teachings of Islam, Judaism and Christianity into a single binding thought. He also attempted to reconcile the several contrasting teachings of Aristotle and Plato, although it is noticeable that he is more in favor of the teachings of the latter.

Don't use plagiarized sources.
Get Your Custom Essay on Analysis of Giovanni Pico della Mirandola’s “Oration on the Dignity of Man” Just from $13,9/Page

Although his oration is great in length, it can be summarized into several important points. Possibly the first important point is in the first part of Mirandola’s oration in which he explained the origin of man through the story of creation. He claimed that after God, whom he considers as the highest form of authority in the universe like all other religions, finished creating all creatures, he expressed the desire to create another being who would be able appreciate all of the animals, plants, and other things he created.

In addition, based on his oration, these creatures each had its own “rank” in the world. However, Mirandola claimed that there was no longer any room for another creature in the hierarchy of the world, as all the slots, from angels to worms had already been occupied when he finished creating. According to Mirandola, as a result, God created man in such a way that he would not be belong to any slot or position in the hierarchy or chain of beings.

Instead, Mirandola claimed, that man had the ability to imitate and learn from all the other creatures, which he likened to a “chameleon. ” Furthermore, he asserted that man’s destiny was the controlled merely by the hand of God, but by his own freewill. In other words, according to Mirandola, human beings could change themselves based on the decisions and the choices they make. In addition, he claimed that these choices could lead man closer to God or farther away from him.

After Mirandola’s explanation of man’s purpose in the world, he then discussed how man should act and also discussed the consequences of each of his actions. According to him, human beings should imitate the actions of Cherubims, whom he described as the angels that “flashes forth the splendor of intelligence,” as this would help them ascend the ladder or hierarchy of beings and ultimately reach God, whom he claimed as the one on top of the ladder.

In other words, Mirandola asserted that it is through the use of human intellect, specifically through philosophizing or engaging in intellectual discussions, can human beings become like angels and become one with their creator God. Moreover, although there are other ways of communing with God and ascending closer to him, according to Mirandola, the use of human intellect is the best way to do so because in is through thinking can human beings conceive and understand “pure” and eternal ideas and thoughts.

In other words, Mirandola generally emphasized the importance of the power of the imagination as this where limitless possibilities occur. In contrast, based on his oration, when human beings fail to use their intellect they descend the ladder or the hierarchy and become evil and useless. Furthermore, according to him, it is this ability of man, which the exercise of freewill that distinguishes him from all the other creatures of God and thereby making him superior to them.

Mirandola claimed that only human beings have control of their fates as all the other creatures in nature are controlled by external forces acting on them. Moreover, he also explained based on the teachings of Empedocles, that human beings have dual souls. One brings them closer to the heavens and in effect closer to God while the other drags them further down the earth, where war and discord exists. However, Mirandola emphasized that it is solely the choice of human beings which soul they would nourish.

Another important point that Mirandola discusses in his oration is his view on the many schools of thoughts or philosophies existing in the world. First of all, according to him, philosophies always change, which makes a human being’s ability to self-transform the only thing constant. Moreover, he emphasized that since there are many philosophies and beliefs, which include the teachings of Plato, Aristotle, Christianity and Islam, among others, it is best for man to learn all of these doctrines to have a broader view and understanding of life and the journey to God.

According to him, human beings should not simply believe in and stick to a single dogma or doctrine, especially if this attacks other teachings, as this hinders their capacity to think, which he holds in the highest regard. Furthermore, Mirandola also stressed that in the system where man has freewill and can transform himself into any other existing creature, it is the philosophers, which include himself, who are considered the most dignified and possible the highest form of human beings.

Based on his oration, he believed that since philosophers think and engage in debates most of the time, they are drawn closer to God and they ascend the hierarchy of beings faster than other humans. Similarly, he asserted that artists, writers, and painters, who have very powerful imaginations, are not merely artisans but geniuses as they possess ability to exercise their intellectual capacities Lastly, another notable point that Mirandola discussed is his of view on the mystery of God himself.

According to him, God made himself known to prophets like Moses not through a single revelation but a series of revelations that made them understand his true nature and character. In addition, he emphasized that there only a few human beings who possess the capacity to understand the revelations of God because it is they who can accurately and truthfully profess what they know and what they have discovered.

Analysis of Giovanni Pico della Mirandola’s “Oration on the Dignity of Man”. (2016, Dec 24). Retrieved from https://studymoose.com/analysis-of-giovanni-pico-della-mirandolas-oration-on-the-dignity-of-man-essay 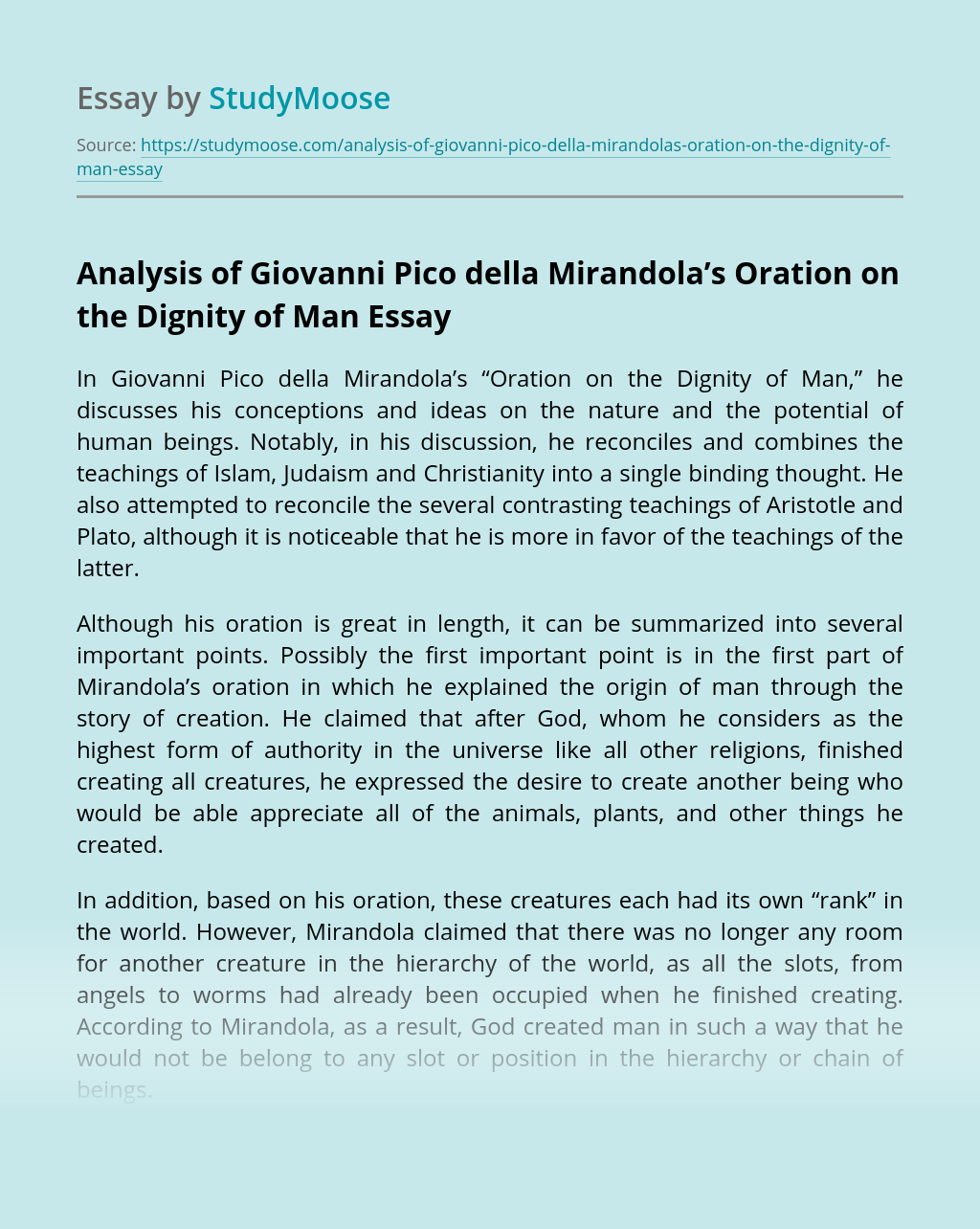 Rate this post With the paradigm shift in the contemporary environment in which businesses operate, companies are faced with several challenges, one of them being hostile takeovers. There are a number of reasons for these captures. Thus some company managers decide to give out dividends for fear that the company could be a very trouble-free...

Rate this post Education is the most powerful weapon which people can use to change the world. Mixed school, also known as co-educational schools is seen to be beneficial for both sexes. Therefore academic performance in a mixed school is likely to be seen good as compared to a single sex school. This is due...

Get Essay
Moving to a New Country

Rate this post People move to an other country for many reasons: to escape from their exausting routine, a career change, health purpose, but for me it was as part of an University exchange. I’m a moroccan student who live in South Korea since August 2012, and I was suprised of some aspects of this...

Engineering Marvels of the Roman Empire

Rate this post At the height of their civilization the Roman Empire controlled over 2,300,000 square miles of territory that spanned through the continents of Europe, Asia and Africa. At the heart of the empire was the great city of Rome. A modern day New York, Rome boasted many incredible landmarks. Here was located the...

History of the Internet