Analysis of “The School of Athens” by Raphael

Raphael, the youngest of the three great artists who defined the Italian High Renaissance, was born in the small yet artistically significant Central Italian city of Urbino. It seems that Raphael attained his natural gift of creativity from his father who was a poet and a painter. Orphaned at an early age, Raphael was sent to be an apprentice to the distinguished painter Perugino, and by the tender age of twenty-one had flourished into an impeccable artist with talent surpassing that of his mentor.

Don't use plagiarized sources. Get your custom essay on
“ Analysis of “The School of Athens” by Raphael ”
Get custom paper
NEW! smart matching with writer

Over the course of the next four years, Raphael lived and worked in Florence alongside Leonardo DaVinci and Michelangelo. Raphael could not escape the imminent influence of these two legendary artists. By 1508, Raphael’s reputation had already been established and at the age of twenty-five he was summoned by Pope Julius II to decorate the walls of the papal apartments in the Vatican Palace, which happened to be just steps away from where Michelangelo’s Sistine Ceiling was in progress.

This commission allowed for the creation of the world-renowned fresco titled, The School of Athens.

This work is revered as one of Raphael’s greatest achievements and possibly the greatest achievement of the High Renaissance period. This commission would bring Raphael deserved recognition and notoriety and ultimately led to him becoming the leading painter in all of Rome. The School of Athens is a painting of world-renowned stature because of its impeccable harmony, which was characteristic of Raphael’s work. In order to understand the influence of this piece one must recognize Raphael’s overall achievement here: he successfully created a scene of nearly sixty figures, each individual and alive, that yet combines in a design that is harmonious, clear, and befitting the classic importance and dignity of its subject.

Harmony is created in part by the use of contrasting elements. Most obvious of these elements would be the differing philosophical ideas of the two principal characters, Plato and Aristotle.

Plato is shown pointing upward suggesting his emphasis on the existence of a spiritual realm beyond the physical world. The gesture is a reference to, “Plato’s interest in the world of ideas, a meta-world that exists beyond our comprehension of reality” (Crenshaw 126). On the other hand, Aristotle gestures his hand downward stressing his belief that the physical world is the basis of all knowledge and understanding. Plato carries the Timaeus, one of his dialogues that explains his belief in the reality of a world of ideal forms which exists beyond the material universe. Aristotle is shown holding his famous Niomachian Ethics that illustrates his belief that knowledge is only gained through empirical observation and experience of the material world. The two figures are further differentiated by their sense of movement and their age. Plato appears to be an older gentleman who seems to be moving with an air of patience and grace while Aristotle is a younger man who seems to be moving forward with a greater sense of urgency and energy.

The picture is then divided neatly in half, the idealists or “thinkers who concerned themselves with ideas and abstract concepts” (Crenshaw 126) are on the left side with Plato. To the left of Plato in a dark green robe, Socrates can be seen engaging in an argument amongst a circle of his disciples enumerating points on his fingers, “in a classic visualization of the Socratic argumentation technique” (Crenshaw 126). Socrates was an influential and revolutionary Grecian philosopher whose work was meant to show how argument, debate, and discussion could help man to understand and resolve difficult issues. Although the notion that this figure is indeed Socrates has been widely accepted for generations, a new idea has recently emerged among art historians. These historians speculate that Socrates is actually the figure shown sprawled about on the steps directly in front of Plato and Aristotle. Some interesting theories support their argument. The first point they make states that, “compared to most of Raphael’s figures who are rather richly dressed, this man, with his simple, bare-shouldered himation, gives the impression of far more modest tastes.

He also seems to have come from an earlier era” (Bell 641). These obvious features accurately describe Socrates. Another important point to note would be the placement of this figure. One cannot deny that the figure is in a place of specific significance and attention. Our eye is drawn first to the central figures, Plato and Aristotle, and secondly to the figure lying on the steps in front of them. The new identification of Socrates suggested here, “places the three most important philosophers in the center of the School of Athens, where they are depicted without any intervening figures between them” (Bell 641). This strategic placement allows for a natural emphasis on the three most influential philosophers of all time. This new identification becomes problematic when one considers the fact that for most of history, this figure on the steps has been identified as Diogenes the Cynic. Diogenes’ philosophy encouraged men to live a life of simplicity and to reject all forms of luxury.

He sought to expose the falsity of most conventional standards set by society. While Diogenes was a philosopher of significant stature he does not measure up to the over arching influence of the famed Socrates. This figure has been widely accepted as Diogenes because of his apparent demeanor and clothing. The figure is shown in what some refer to as rags, which supports the argument that this character is Diogenes. Another element that supports this man being Diogenes is the way the character interacts with the philosophers around him. He appears to be withdrawn from the rest of the group, which was characteristic of Diogenes, who was considered by most to be an individual who lived on the fringes of society. Although this figure could possibly be Diogenes, I conclude that the new identification suggesting that this figure is actually Socrates proves more convincing. If the figure on the steps is Socrates, where is Diogenes? Some art historians have theorized that Diogenes is the man standing alone under the statue of the God Minerva. No other philosopher appears so unkempt and disheveled, almost shunned by his fellow Athenians.

Adding further evidence to this theory, “it would be appropriate to portray Diogenes as a very old man, dressed in only a simple red-brown cloak, which, according to Laertius, he wore everywhere” (Bell 643). In my opinion, I would argue that this new identification is indeed more valid than the previously accepted version. The fact that not all of these figures have been correctly identified or even identified at all, keep art historians interested in the work. Perhaps Raphael intentionally left the identities of these two figures unexplained to spark the viewer’s curiosity. In the lower left foreground Pythagoras is shown “illustrating his musical theorem” (Crenshaw 126) to a group of his students. Shown leaning on a block in the foreground is the pre-Socratic philosopher Heraclitus, who claimed that understanding is realized through introspection. Heraclitus seems to be lost in thought and appears to be uninterested in interacting with the other figures surrounding him.

This figure is thought to be a portrait of Michelangelo therefore portraying him as a man of little social capability. Raphael is possibly also contrasting himself to Michelangelo suggesting that Michelangelo is a man of quiet introspection while he is a sociable man who is well liked by all. The realists or Aristotelians are on the right side with Aristotle. Further emphasizing their realist ideals the right side of the painting is shown under the statue of Minerva, the goddess of wisdom and the sense of sight (Crenshaw 126). Shown in the lower left foreground is Euclid, the Greek mathematician, and his four students absorbed in their mathematical demonstration. Euclid is remembered as the “Father of Geometry”. He also researched and closely observed optics and perspective (Janes 57).

Euclid resembles the influential architect Bramante, who was a friend of Raphael. Zoroaster and Ptolemy are shown facing opposite one another directly above Euclid. Zoroaster, a philosopher of ancient Persia, shown here holding a celestial globe is discussing with Ptolemy, the Greek geographer who believed that the earth was the center of the universe, holds a terrestrial globe (Janes 57). Directly above Ptolemy and Zoroaster is a figure standing alone wrapped up in his cloak and his thoughts. This figure is the lawgiver Solon. Tucked into the right corner of the composition is Raphael’s teacher Perugino. By placing Perugino in the composition, Raphael is showing his deep respect for his mentor and thanking him for sharing his knowledge. The figure next to Sodoma is actually a self-portrait of Raphael himself. By placing himself along with other artists in the scene, “Raphael asserts that art is, in fact, an intellectual enterprise — a form of study and enquiry, not merely a manual activity” (Crenshaw 126).

It is also no coincidence that Raphael places himself on the Aristotelian side, among philosophers who work from observation. The School of Athens is considered to be one of the most important achievements of the High Renaissance. This work exemplifies the High Renaissance in the graceful movements and gestures of the figures. All the figures appear to be moving and actively interacting with one another. The figures are also very large in scale and fully idealized in form. The fact that this gathering is completely idealized is also characteristic of the High Renaissance. The philosophers come from a wide range of times and places who could not have possibly met or interacted with one another. The composition displays the gathering under an architectural framework that is reminiscent of the Italian Renaissance architect Bramante’s plan for the New St. Peters. During the early 16th century, architecture was inspired by the grandiosity and monumentality of ancient Roman buildings such as the Coliseum in Rome.

The main architectural element portrayed in the fresco is executed in the classic Doric style, characterized by simplicity and minimalism of decoration. The architectural framework also creates a sense of symmetry and special depth. All of the elements stated above combine to make this work a masterpiece of the High Renaissance. The School of Athens is undoubtedly a work of art that will continue to be viewed as an outstanding achievement of the High Renaissance, and the most impeccable work produced by the famous Raphael. Art historians will continue to research the work and perhaps uncover the philosophers depicted whose identities have yet to be revealed. The legacy of this piéce de résistance lives on.

Analysis of “The School of Athens” by Raphael. (2016, Dec 27). Retrieved from https://studymoose.com/analysis-of-the-school-of-athens-by-raphael-essay 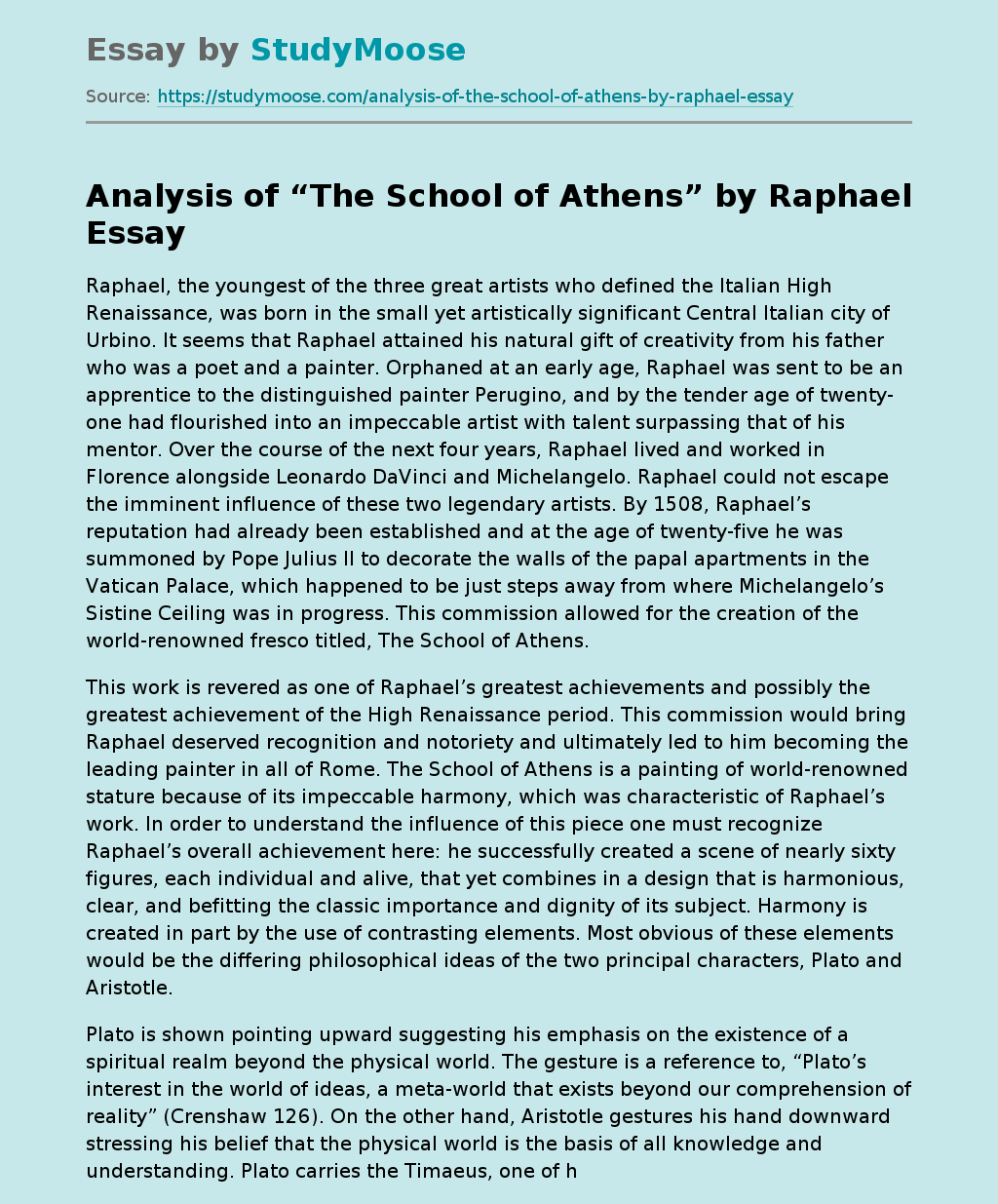