Classical Athens and Han China were different due to their forms of government, the relationship between the individual and the state, their views on man and nature and their background information.

Within the background information of both Athens and Han China there are very evident differences between the two. The first document shows the maps of both the empires side by side. The Han Empire is much bigger than the Athens city-state Attica which is a mere 50 miles long, while the Han Empire stretches over 2400 miles long.

Turn in your highest-quality paper
Get a qualified writer to help you with
“ Han China & Classical Athens DBQ ”
Get high-quality paper
NEW! AI matching with writer

The size difference alone shows how the Empires would have developed differently. Since Attica is smaller, the people are closer together, therefore it would be easier to develop a democracy there. Han China, however, is very big and everyone is spread out so it would be very difficult to govern if every citizen had a say in the decisions.

The second and third documents show the differences in size and distribution of the population in both empires.

The differences here are clear. Han China is about 206 times greater in population than Athens. In Athens about 37% of their population are slaves while in China about 7% of their population are slaves or what they call, “mean people.” The majority, about 90%, of the population in the Han Empire consists of peasant farmers and some skilled urban workers. In Athens, farmers were very valued and the majority of the citizens there were landowning farmers. A map of population density would be very helpful in understanding the differences between the empires.

This would show where most farming took place because the mass population is farmers and slaves.

Han China and Classical Athens governments are extremely different. Han China’s government was strictly centralized, with an emperor as their supreme and divine ruler; the Son of Heaven. People believed that Heaven chose the person who was ready to rule the Empire. Many people questioned how Heaven does this. In document 6, a dialogue between Mencius, a student of Confucius, and Wan Chang, Mencius’s student, Chang asks Mencius a few questions of Heaven choosing it’s next son. Mencius’s answer was that Heaven does not speak but reveals itself by acts and deeds; Heaven sees with the eyes of its people and hears with the ears of his people. Document 7 talks about how Han China’s government system runs. Heaven selects the emperor, the sole ruler, but he needed people to help him rule.

Therefore he appointed governors to each part of the Empire and then, in turn, they placed officials at smaller areas. During the Han Dynasty, the government decided to build and expand bureaucracy. The bureaucrats would have to go through an early form of a civil service exam in order to earn a law-making position at stages of government such as local, regional and federal. However, Stearn describes the Han Empire as the largest political system in the classical world, but Stearn’s bias can be seen here and must be considered. However, Classical Athens’ government is a democracy, not entirely a modern democracy like the United States, but a democracy nonetheless.

Document 4 is a speech by Pericles, a Greek statesman, which talks about the empire’s qualities of their government. Any man, regardless of their social class can be elected to hold office. Pericles talks very highly about his government, “… we are rather a role model to others.” His point of view on the government system may be affected by the fact that he is the General of that empire so he would be biased toward their government. 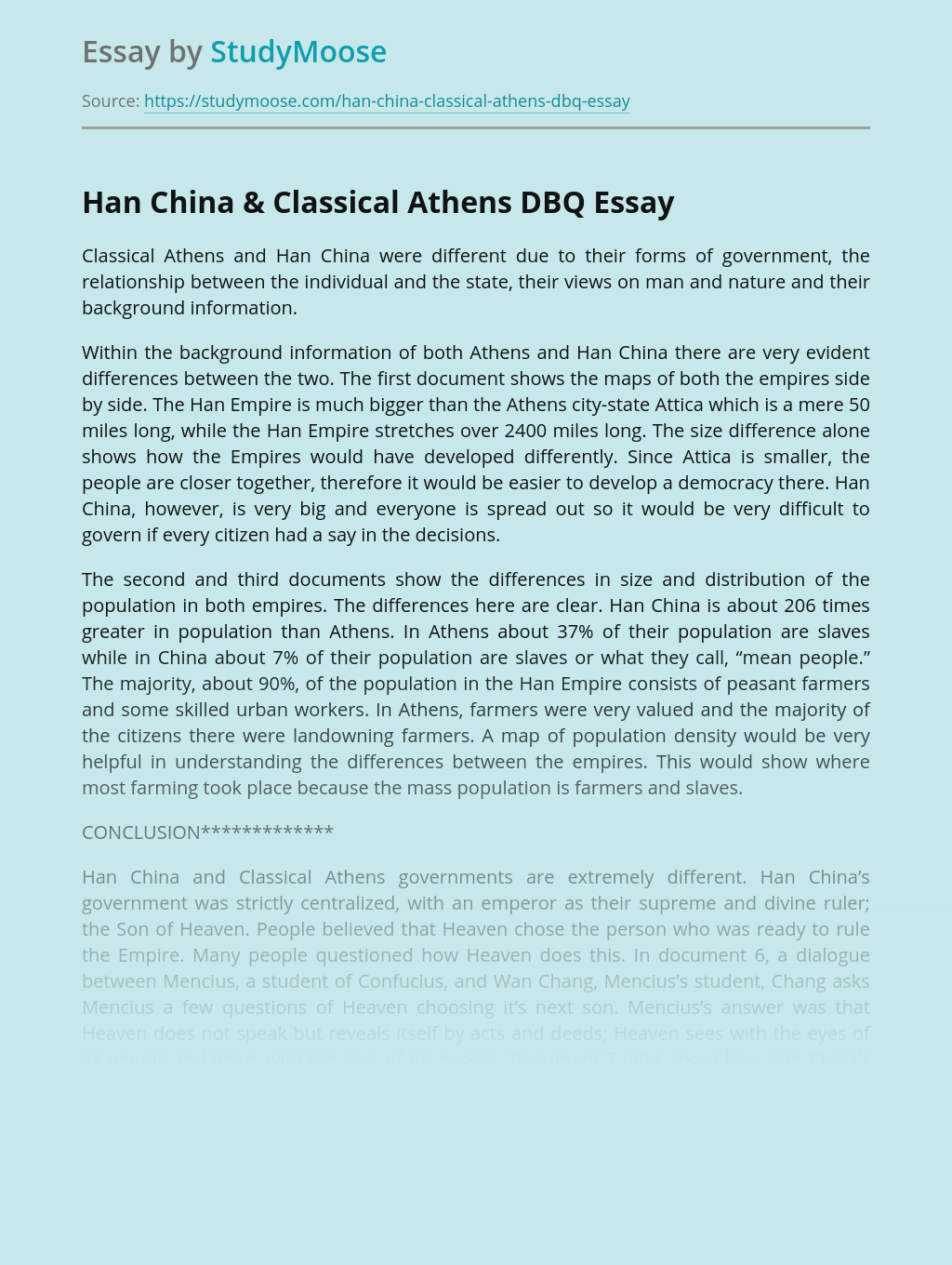 Turn in your highest-quality paper
Get a qualified writer to help you with
“ Han China & Classical Athens DBQ ”
Get high-quality paper
Helping students since 2015
Stay Safe, Stay Original