“Shiloh” was written by Bobbie Ann Mason in 1982. The center of attraction of this narrative is a married couple, Leroy Moffitt and his wife, Norma Jean. During this story the characters are affected by their changing social rural Kentucky environment. In this time period, Kentucky transforms to a more suburb environment from their usual rural surroundings. Apart from their marriage changing with their social environment, so does their role of gender. Leroy and Norma Jean swaps traditional gender roles, which alters their marriage and leads to the breakdown of the Moffitts.

The narrative is told from the perspective of Leroy Moffitt, a recent disabled truck driver. Although the injury leads him to sit home all day like a bored housewife, he pursues his hobby that is stereo typically feminine. He constructs craft objects from kits and sews needlepoint pillows, as a pleasurable interest. However, he dreams of building a log cabin for his wife from one of his craft kit models, which symbolically portrays their marriage.

The cabin is an unrealistic idea, and the project does not interest Norma Jean. Despite the fact that nothing dissuades him, he won’t let go of the idea of the cabin in the face of strong opposition that he won’t give up on his marriage in the face of clear evidence that his wife already has.

Leroy sooner or later realizes that his marriage is as hollow as the boxy interior of their log cabin. Apart from Leroy’s lack of realization that his wife wants to adapt to her surroundings, and progress with her life, he is still stuck in the past and continues to pester his wife of living in an old log cabin.

However, as Leroy builds craft kits and smokes marijuana all day, Norma Jean supports her and her husband by working at a Rexall drugstore. She eventually goes from a weightlifting class to a night composition class, reconstructing her mind and body and doing her best to adapt to change. In the meantime, Leroy resisting to do the same, is happy to be home and feels affectionate towards his wife, but he worries that she does not return these feelings. He wonders if his presence reminds her of their lost son, Randy, who died of sudden infant death syndrome. We have been informed that Leroy’s drug dealer, Stevie Hamilton, would of been the same age of Randy.

This event tells the audience that Leroy refuses to move on from the past and continues to bring their marriage to an end. Consequently, the Moffitt’s gets one of their frequent visits from Mabel, the mother of Norma Jean and is constantly nagged by her to take a trip to Shiloh, a Civil War battlefield. This place is where Mabel and her late husband, Jet, spent their honeymoon and she thinks that such a trip will help them solve their marriage problems. After arriving at Shiloh, they see a log cabin, as Leroy expected. Close to the cemetery, they eat lunch. After they eat, Leroy smokes a joint, silence falls, and Norma Jean tells him that she wants to leave him. He suggests starting over, and she says they already did start over. After making her final decision, she travels down a serpentine brick path to begin her journey. Norma jean does not know where this path will lead her, but she knows that she is finally leaving. Leroy and Norma Jean are both victims of rapid social change.

Norma Jean was the most affected by her surroundings comparing to Leroy. Norma Jean had to marry at the age of eighteen to the man who got her pregnant, and in a cruel twist of fate, the child dies of sudden infant death syndrome. This event from her life prevents her to look towards the painful past. From the very beginning of the story, Norma Jean is portrayed as a woman continuously trying to better herself. She takes the opportunity of Leroy’s rehabilitation from his accident to start bodybuilding. After the bodybuilding class is over, she takes a composition class at night, and starts to cook more exotic food. Apart from Norma Jean’s efforts to self-improvement, Leroy refuses to move on from the past. While their surroundings are modernizing and changing to a more suburb area, Leroy continues to live in the past, such as living in an old log cabin.

Leroy also relates the present to the previous, when he relates the doctor’s son to his own lost son. These two characters opposing each other, leads Norma Jean to her final decision of leaving her husband at the end of the story and the various aspects of her character revealing that desire. These aspects of her character were her devotion to progress in life, and her inability to communicate with her husband while he was still stuck in the past. The setting in the short story “Shiloh” by Bobbie Ann Mason works well to accentuate the theme of the story.

The theme portrayed by the author is that most people change along with their environment, with the exception of the few who are unwilling to adapt, making it difficult for things such as marriage to work out successfully. As Norma Jean advances herself, their marriage ultimately collapses due to Leroy’s unwillingness to adapt with her and the changing environment. The author’s use of the difficulties of Norma Jean and Leroy’s adaptation to their changing environment, leaves the story to its central theme, change and transformation. 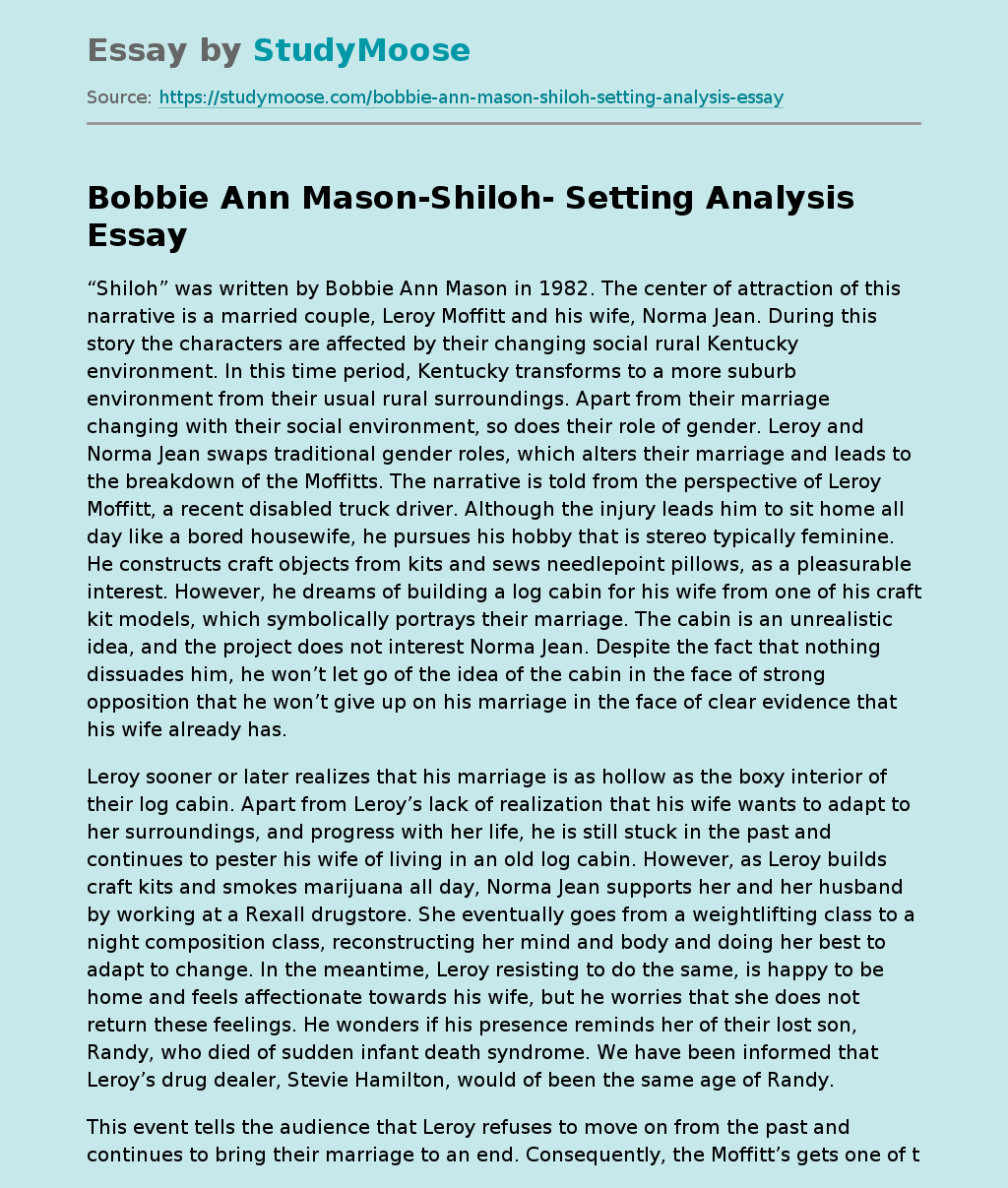