A Lesson Before Dying “If We Must Die” by Claude Mckay

In the passages “If We Must Die” by Claude McKay, the speaker set a courageous tone by using words like “brave”, “fighting”, and “honor” in sentences throughout the passage to show that the men were not afraid although they were outnumbered. This work of literature teaches the reader that if a group of people can come together as one they can be more powerful then a greater population. In the literary work “A Lesson Before Dying” by Ernest J. Gaines, Jefferson’s tone was cowardly/immature in the beginning of the book, but as the book progressed his tone changed to him being more spirited and content.

Don't use plagiarized sources. Get your custom essay on
“ A Lesson Before Dying “If We Must Die” by Claude Mckay ”
Get custom paper
NEW! smart matching with writer

In “A Lesson Before Dying” we can learn from Jefferson that although someone puts you down, you should be able to ignore it and move on from it with some pride. The speaker and character in these works of literature used different tones throughout the passages. In the poem “If We Must Die” by Claude McKay, the speaker conveys a courageous tone throughout the passage.

Some examples of the speaker setting a courageous tone are in the lines “If we must die, let it not be like hogs” and “If we must die, O let us nobly die” this means that no matter how anyone treats them, if they die, they’re going to die like men with pride and dignity.

Also in the line “Though fat outnumbered let us show brave, and for there thousand blows deal one death blow!” this line sets a courageous tone because although they are far outnumbered and the enemies will be much stronger individually, they’re going to come together as one to attack with more intensity then the enemies.

The last line that creates a courageous tone is “Pressed to the wall, dying, but fighting back” this means that they fought to the second that they died, dying bravely and with pride. In this passage a courageous tone was set because the speaker talked about even though the men knew they were highly outnumbered and out powered, they still fought with pride to the death.

In the book “A Lesson Before Dying” by Ernest J. Gaines, Jefferson showed a cowardly and immature tone. When Jefferson was called a hog by his defense attorney in the beginning of the book he couldn’t get over it. Whenever Grant would visit him and try to help, Jefferson would ignore Grant. Even when Grant brought Jefferson food from Ms. Emma, Jefferson gets on his hands and knees and starts to eat the food as if he was actually a hog. Jefferson began to become obsessed with the fact that he might actually be a hog.

Grant thought it was going to be impossible to change his attitude, but Grant tells Jefferson that he his a role model to the black culture in the community and that Bayonne needs him to have dignity. This is when Jefferson’s tone changed to a more spirited and mature tone. He started to mature and engage in conversations with other people. Grant also bought him a radio, which made him saner. Jefferson now started to become content with the fact that he was going to die, and when he does die he’s going to die with dignity and with a positive aura on the black community.

Within these two works of literature there are tones, which are used to get a point across more easily and put emphasis on certain details. There are also many similarities and differences between the two works. Some similarities are that in both of the passages they wanted to die like men by the end. Also in “If We Must Die” and “A Lesson Before Dying” both Jefferson and the speaker were treated like hogs, as well as in both literatures unfortunate situations were occurring throughout the stories. Some differences were that the speaker in “If We Must Die” had a brighter outlook on things compared to Jefferson who was very negative in the beginning. Another difference is that the speaker overcame being called a hog wanted to die with pride but Jefferson on the other hand was very sensitive about it and took it to the heart. These two works of literature had their similarities and differences but for the most part these passages had similar outcomes and tones.

A Lesson Before Dying “If We Must Die” by Claude Mckay. (2016, Dec 10). Retrieved from https://studymoose.com/a-lesson-before-dying-if-we-must-die-by-claude-mckay-essay 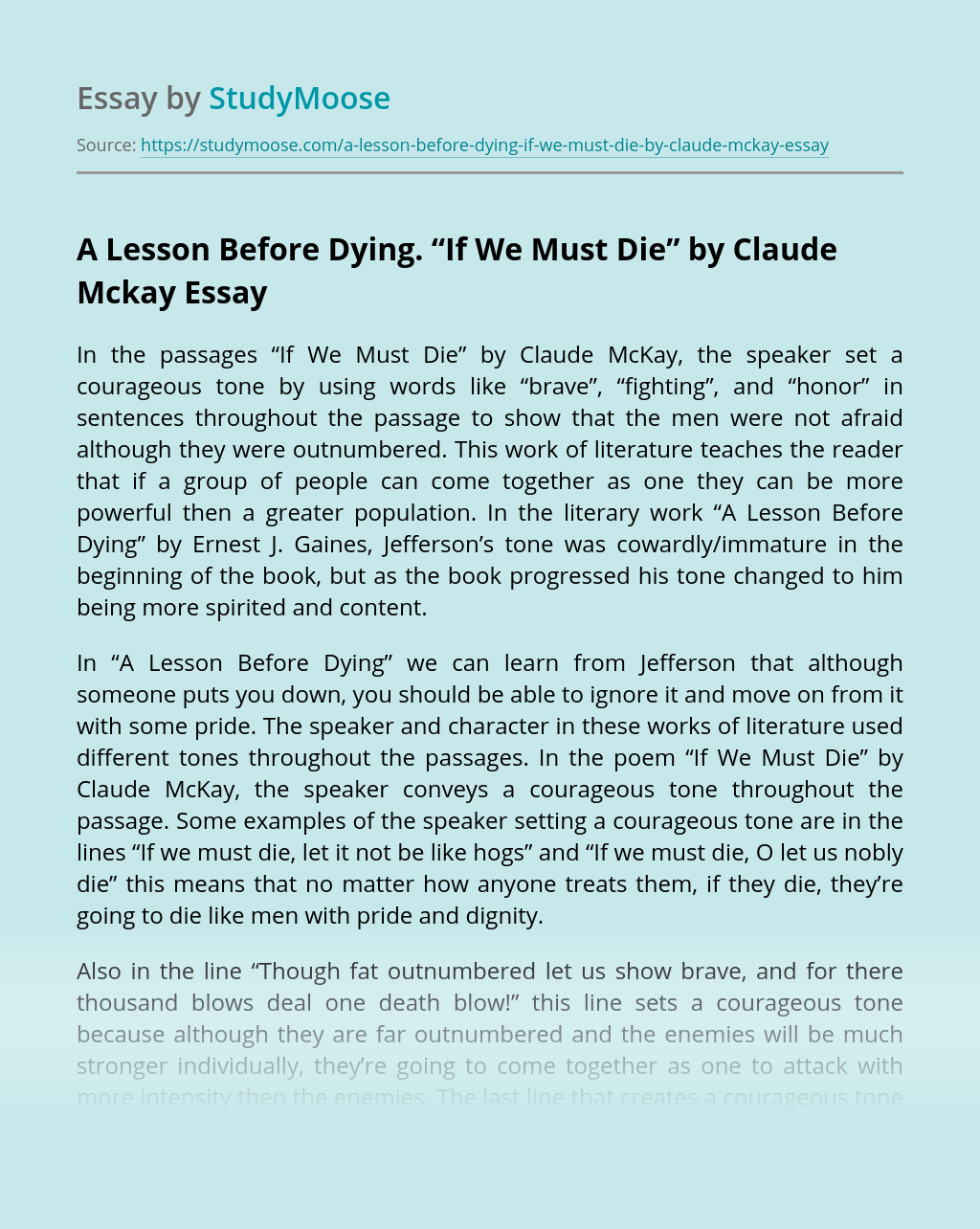